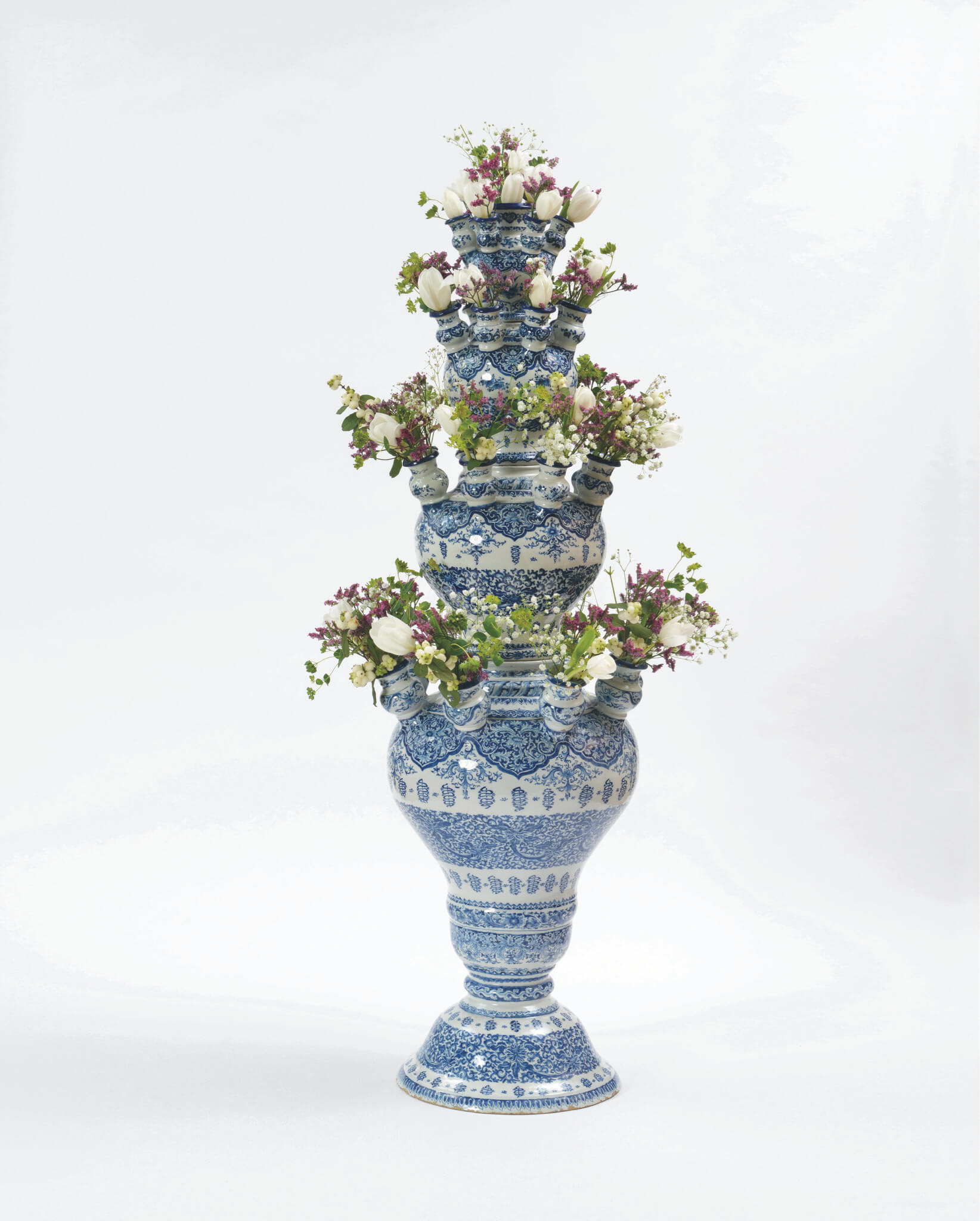 Although the flower vase is unmarked, many of its stylistic details suggest that it was designed, painted and produced by De Witte Ster factory.

Two other similarly shaped baluster-vases are known, one in the Museum of Applied Arts ofthe Moravian Gallery in Brno (inv. no. 15.252) and one currently in a Qatari Private Collection. The baluster vase in the Brno collection is marked by a blue star on the bottom of the lower section, identifying it as a production of De Witte Ster (White Star) factory. The vase was originally constructed in four sections, one of which is missing today. In its current state, the piece stands 100 centimeters tall. It would likely reach the same height as the present example if it were fully intact with each segment. Further, the three surviving parts of the Brno vase have identical dimensions to the present flower vase.

Although the Brno vase is designed as a harmonious entity, the ornamentation on each segment is entirely unique. Each section contains rows of petal shaped panels that are alternately painted with vases of flowers and flowering plants. These are surrounded by a profusion of delicate motifs such as ruyi-heads, oral vines, and decorative patterns. Many of these motifs are found on the present flower vase, such as the blue ground oral lappet border on the top segment, the ruyi-heads displayed on several nozzles, the leaf tips, the dentil bands, and the typical bands of leaves and ribbons. Based on the similarities in shape and ornamentation, it is highly probable that the same molds were used to produce the two vases.

Minneapolis is a major city in Minnesota that forms “Twin Cities” with the neighbouring state capital of St. Paul. Bisected by the Mississippi River, it’s known for its parks and lakes. Minneapolis is also home to many cultural landmarks like the Walker Art Center, a contemporary art museum, and Minneapolis Institute of Art. In 1883, twenty-five citizens of Minneapolis founded the Minneapolis Society of Fine Arts, committing them to bringing the arts into the life of their community. More than a century later, the museum they created, the Minneapolis Institute of Art, stands as a monument to a remarkable history of civic involvement and cultural achievement.