The Toledo Museum of Art is located in the Old West End neighborhood of Toledo, Ohio. Edward Drummond Libbey, a Toledo glassmaker, founded the museum in 1901. Over the years the museum expanded by adding multiple buildings to house its large collection of glass, nineteenth and twentieth century European and American art, as well as Renaissance, Greek, Roman and Japanese art.

Toledo is well-known as the Glass Capital of the United States. Edward Drummond Libbey wanted to improve the education of local craftsmen and designers by assembling a model glass collection. Not only did he assemble a great collection, he promoted training and exhibited new works. Libbey also supported European glass, and purchased 53 European Renaissance and Baroque glasses for his collection. Through his patronage, the Toledo Museum of Art became one of the most important museums for glassware.

While the collection of glassware was prominent during its early years, the museum also acquired many important pieces of Dutch art, such as works by Vincent van Gogh, Rembrandt and Willem de Kooning. Delftware is another highlight of the collection, with both blue and white and polychrome wares from the seventeenth and eighteenth century. The majority comprises dishes and garnitures, however one series of plates stands out: a series of twelve plates with scenes of a whaling expedition. 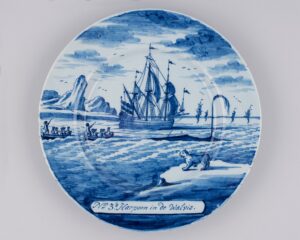 Whale “fishing” took place from April to August in the Greenland seas. During the seventeenth century, whaling progressed from bay and coastal waters to the open sea, and finally to the arctic waters where the whales would swim along the ice floes in search of plankton. The Greenland ice fishery required stronger-hulled ships, the so-called ‘Groendlandvaarders,’ whereas in the Davis Strait lighter ships could hunt. All of the whaling ships were characterized by a large horizontal beam across the width of the stern from which the harpoon boats were lowered for the harpooners to hunt and kill the whale.

While the catch from coastal or bay whaling could be processed promptly in cookeries on land in settlements such as Smeerenburg [‘Blubber Town’], near Spitsbergen, for whaling on the open seas, time, geography and distances were such that the whales had to be slaughtered alongside the ship. The meat and blubber were barreled aboard the ships, and after the return of the fleet to the Dutch harbor, they were reduced to oil.