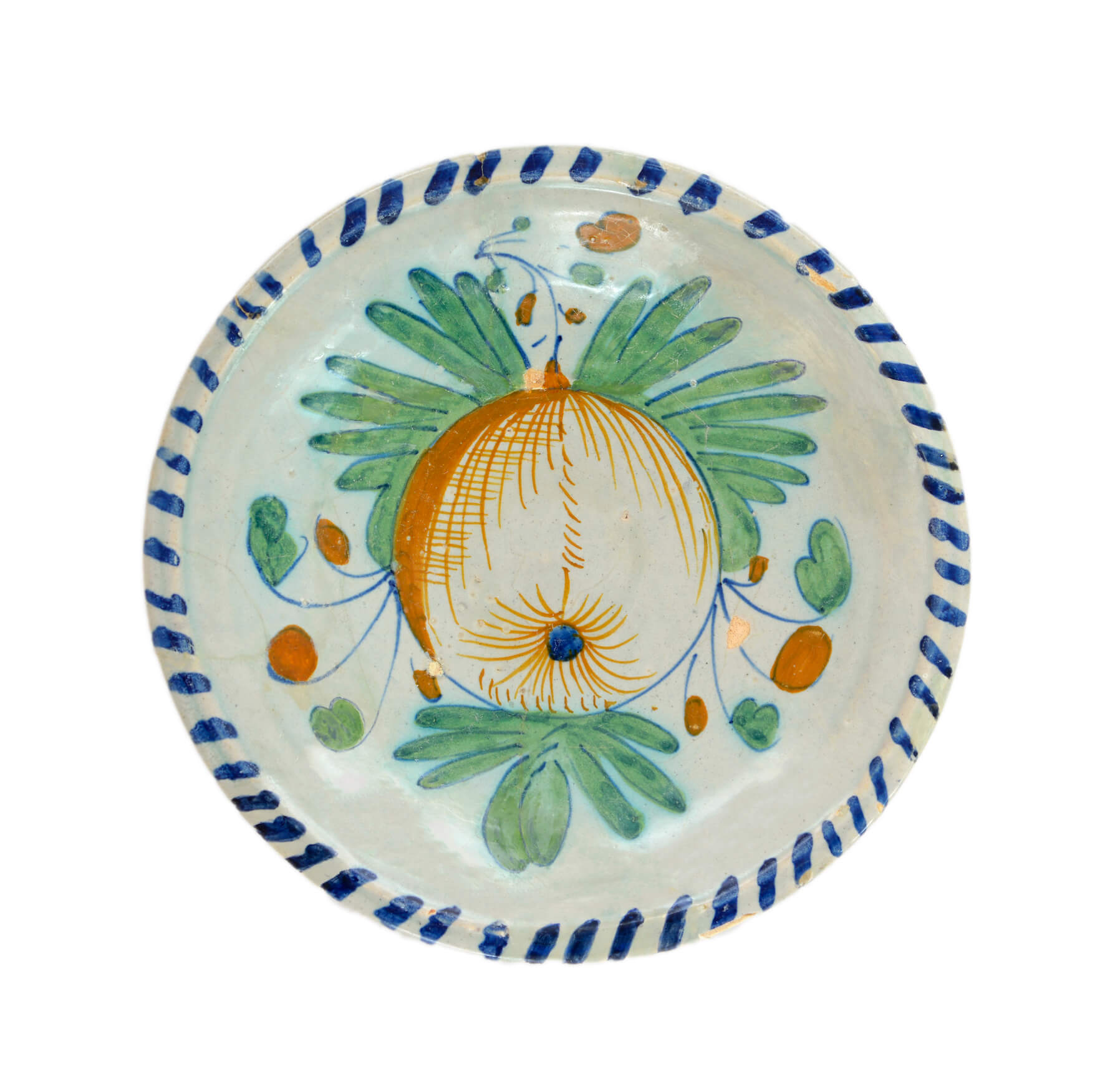 Every month we present a special object from the Aronson Antiquairs’ collection. This month we would like to show you this majolica polychrome plate. Made in the city of Haarlem around 1630, this majolica plate is the forerunner of Delftware. The plate is painted in the center in the typical colors used on majolica – ochre, blue and green – with a pomegranate amidst leaves. The pomegranate is a fruit with ancient symbolism and history, and because of this enduring popularity have long been used to decorate ceramics.

In the late sixteenth century potters of Italian origin migrated from Antwerp to the Northern Netherlands due to religious and political turmoil (the Fall of Antwerp in 1585). These potters settled in cities such as Haarlem and Delft, bringing with them their knowledge and skills in making Italian-style tin-glazed earthenwares (maiolica). The early Netherlandish majolica production consisted mainly of dishes and porridge bowls covered on the front in an opaque white tin glaze, and on the reverse with a less costly transparent lead glaze. The decoration of these pieces in either European patterns or imitations of ‘kraak’ porcelain (the first type of Chinese export porcelain from the Wanli period [1573-1620] to be imported into the Netherlands), or a combination of both, was painted predominantly in blue, yellow, orange or ochre, green and manganese, colors derived from mineral oxides.

Majolica can be distinguished from Delftware not only by the clear glaze on the reverse, revealing the buff-colored body of the clay, but also by the three small spots of glaze damage on the front (prunt marks). These were created by the stacking of the pieces on top of one another in the kiln, separated by ceramic triangles that had to be broken away after the firing. In that process, the points where the triangles had rested would leave their mark: a small unglazed scar.

The pomegranate, a native fruit of the Eastern Mediterranean lands, appears as a subject and symbol in many of the Ancient cultures of the region. The Egyptians considered it a symbol of prosperity, and understood its medicinal properties. In Greek mythology, the pomegranate, thought to have sprung from the blood of the god Adonis, was known as the “fruit of the dead,” and it appears with various good and evil properties in numerous myths. In early Christian iconography, the pomegranate appears in various stages of ripeness, but when it is split open, revealing its seeds, it symbolizes the fullness of Christ’s suffering and resurrection. The pomegranate is mentioned frequently in the Bible, and in the Jewish religion one of the Rosh Hashanah traditions is the consumption of pomegranates, which, with their plenitude of seeds, symbolize fruitfulness. Eventually the Jewish interpretation prevailed and by the seventeenth century in the cultures of Western Europe the split-open pomegranate had become a symbol of fecundity. Today in Greece, where pomegranates once were such an attribute of misfortune, it has become traditional to break a pomegranate on the ground at weddings and on New Year’s Eve as a token of good luck and fertility.

Painted in the center in ochre, blue and green with a pomegranate amidst leaves, the rim with a blue-dashed border, the reverse lead-glazed.