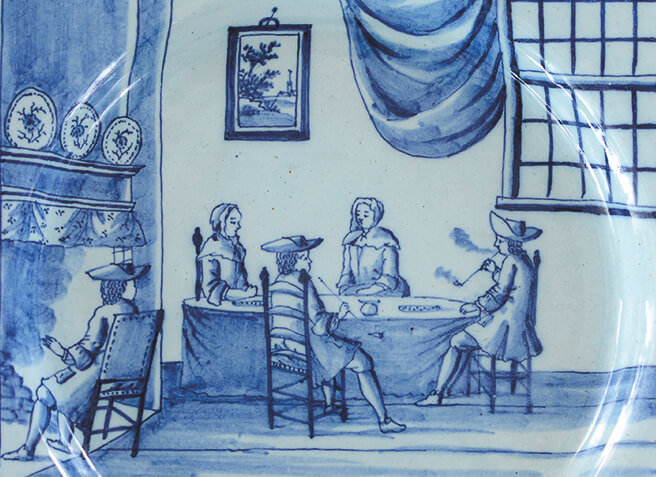 In Delft most factories produced both a high-end line of decorative objects and useful wares and a low-end selection of common utensils, which, ironically, are rarer today because they were used, worn out or damaged and then irreverently thrown away. What has survived today are generally the higher-end objects, in general more beautiful, more admired and cared for by generations of owners. It is often the case of the surviving Delftware plates. These decorative objects were intended to be displayed on etageres, in glass cabinets or on walls. Some of the plates may have been part of entire services commissioned to the Delft potters and were used only on rare occasions.

The representations on the plates are varied, and often reflect contemporary concerns and tastes. Many motifs depicted on Delftware are inspired by canvas paintings or prints, which were sometimes made after original paintings. Within the Delftware production of plates, the series of theme plates have a special place. Series of Delft plates always keep to a maximum of twelve plates. The Delft factories created plates in several themes, such as series based on the Bible and especially the passion story of Christ, but also so-called months plates. 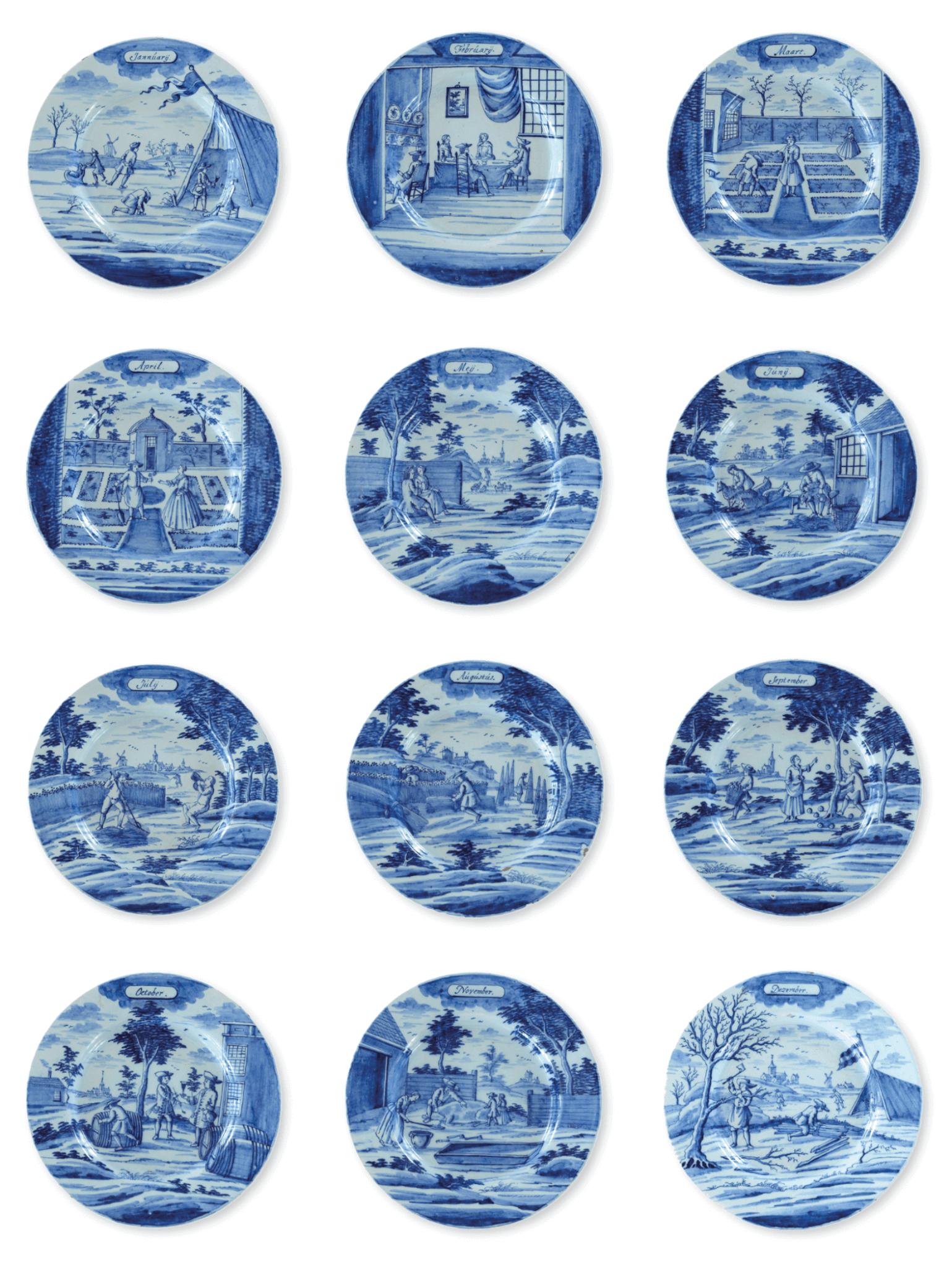 The twelve months plates show the activities that were practiced on the land according to the season. January for example shows skaters on a canal with the typical ‘koek-en-zopie’ tent, while in February it was too cold to go outside and a merry company is enjoying themselves in front of the fireplace. March shows a gardener planting seeds and April shows the first flowers. In May people are enjoying Spring with a shepherd and his flock in the distance, who in June is shearing the sheep. July shows a harvester raking hay, and August as the harvest month, shows the harvesting and bundling of hay. September, also called the fruit month, shows a woman pointing at the apples fallen from a tree being shaken by a man while another man carries away a basket full of the fruit. October being the wine month shows a man rolling a wine barrel near two gentlemen drinking wine. November shows a man bleeding a pig and December showing a winter scene with a man chopping branches from a tree and skaters in the distance. For many centuries the works of the months have been portrayed from which a great diversity of daily activities spoke. The relevant season was linked to this and the name of the month was often added. Besides the present set marked for De Porceleyne Byl (The Porcelain Axe) factory, from circa 1780, only two other complete sets are known. One is in the Philadelphia Museum of Art and another in the LACMA, and both sets are marked for De Porceleyne Byl factory. An early eighteenth-century set of eleven plates, including more figures and with the signs of the zodiac instead of the names of the months, marked for De Witte Ster (The White Star) factory is in the collection of the Kunstmuseum in The Hague.

When creating these Delftware plate series, the painters often took inspiration from prints of other artists. This often concerned serialized prints, which was a common method for artists from the Low Countries in the seventeenth century. For example, the sets of the herring and whaling plates, which are decorated after the print series ‘Groote Visserij’ (‘Great Fishery’) engraved by Adolf van der Laan (c. 1690-1742) after drawings by Sieuwert van der Meulen (before 1683-1730), and published by Petrus Schenk in Amsterdam around 1720. Whereas the two Delft series are limited to twelve plates each, the print series contains sixteen herring prints (numbered 2-17, with the title page as no. 1) and sixteen whaling prints (numbered 1-16).

Although the entire Van der Laan series is entitled ‘Groote Visserij’, this title actually applies to the herring fishery only, which as the ‘silver of the sea’ was the fishing industry of largest economic importance to the Netherlands from the sixteenth to the eighteenth century. During the first decade of the seventeenth century alone, the herring fleets are calculated to have comprised 770 ships (buizen).1 In contrast, during the heyday of whaling in the second half of the seventeenth century, only around 150 to 200 ships set out each year, and consequently, ‘whale fishing’ is referred to as the ‘Kleine Visserij’ (‘Small Fishery’).2 Centers for the herring fishery on the North Sea and on the Zuiderzee inlet were towns along the Maas River, such as Delfshaven, Maassluis, Schiedam, Vlaardingen, Rotterdam and Brielle, and in the north around Enkhuizen.3 Whaling expeditions to Greenland and Davis Strait were initiated from Amsterdam, the Zaanstreek area, De Rijp and Harlingen. Whereas the catches of herring were intended for food consumption, the whaling haul fulfilled a different consumer need, the whale blubber supplying oil used mainly for lighting.

The Delft series of the ‘Great’ and ‘Small Fisheries’ were produced in the second half of the eighteenth century by De Porceleyne Byl (The Porcelain Axe) and ‘t Fortuyn (the Fortune) factories. In comparison to the print series, it is evident that only the main scenes were selected with a simplification of the background and the number of people depicted. Similarly, the texts were shortened to fit the size of the dishes, and some in the whaling series were even interchanged with those from other prints. All of the Delft series vary slightly from one another in the details of the scenes and spelling of the subscripts.4

Therefore, in each of the fishing series four scenes from the original sets of sixteen prints have had to be excluded. The Delft whaling series still maintains the original order depicted in the prints, whereas the herring series has scrambled the order, which somewhat confuses the chronology of the fishing process. The present set of twelve blue and white whaling plates from circa 1780 is marked for Johannes Hermanus Frerking, shopkeeper of ’t Fortuyn (The Fortune) factory from 1771 until 1784. The first plate shows the Greenland fleet setting out to sea, whereafter the second plate shows the fleet sailing into the ice. On the third plate, a harpoon is thrown to the whale, and plate number four show the running of the whale, after which on the fifth plate the harpooners are ready to lance. The sixth plate shows the whale turning, after which it is rowed to the ship on the seventh plate. Then plate number eight shows the flensing of the whale (the stripping of blubber). On the ninth and tenth plate the fishermen come across other Nordic animals, such as walruses and ice bears. The eleventh and twelfth plates show subsequently the fleet sailing in and the boiling of the whale oil.

Just like the print series, the two series of Delft plates enjoyed great popularity for many years.5 It is perhaps the popularity of the charming individual scenes that caused most series to have been dispersed over time, and attempts to reassemble them often have resulted in slightly mismatched sets. As original and complete series, therefore, the two above mentioned sets are very rare.