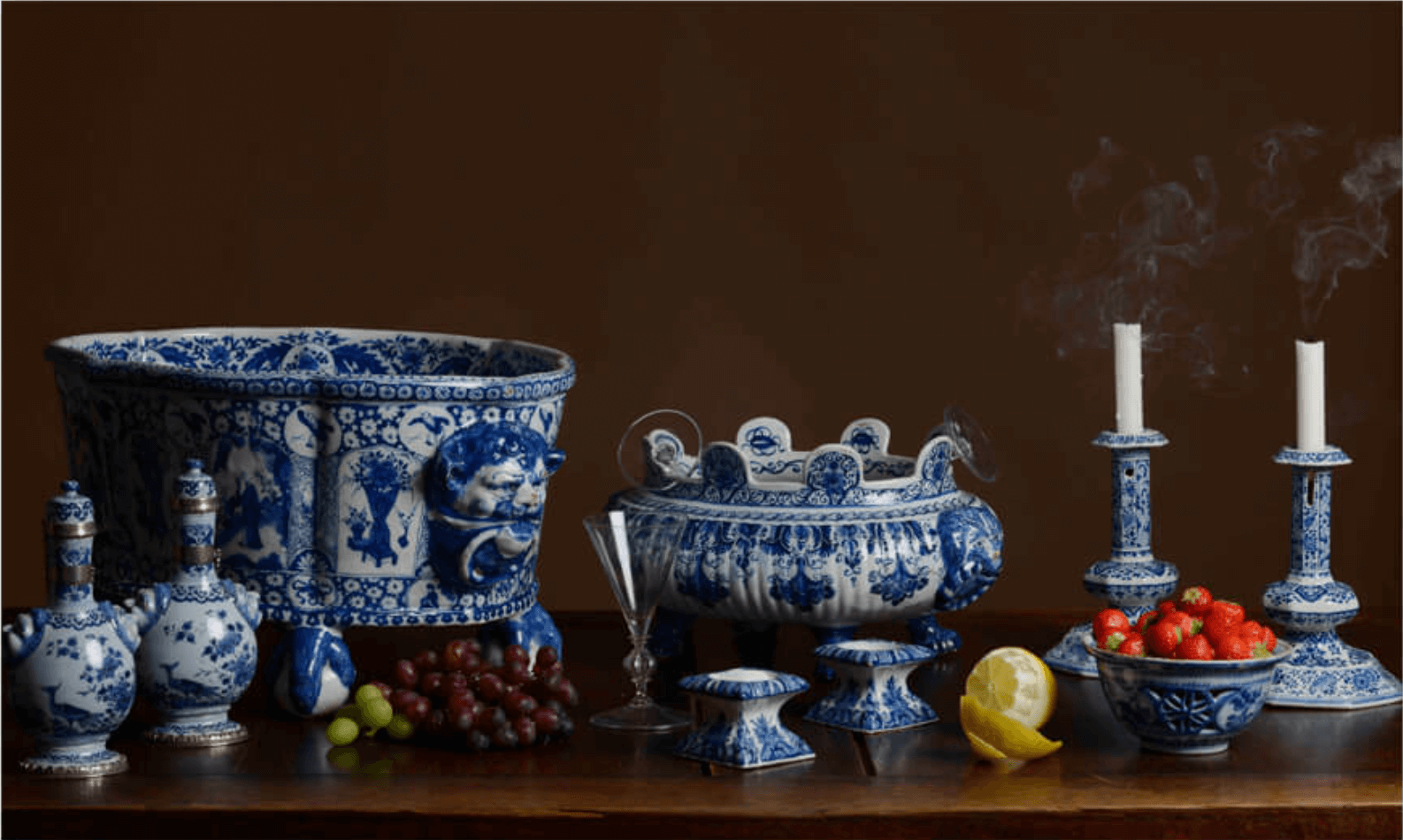 Before electrification, candles were the main source of light after dark. However, they were considered a luxury, even in the well-to-do home, thus the expression ‘the game’s not worth the candle,’ which highlights the fact that lighting a candle was like burning money itself. Tallow candles, made of animal fat, were the most commonly used candles, but they emitted a foul odor and a black vapor, and burned very quickly. An alternative was the beeswax candle, which had a more pleasant perfume and burned for a longer period of time. However, because wax candles were much more expensive, they were mainly used for ceremonial, especially religious, occasions or in very wealthy households.

In the Middle Ages, the use of candles increased and the profession of candle maker became widely respected. In many cities, candle makers had large and powerful guilds. Still, the candle remained expensive for many people. However, from the fifteenth century onwards, people used simple tools to create their own candles, and their use became more widespread in households. However, because of the fire hazard, the use of candles to illuminate evening work was often restricted. 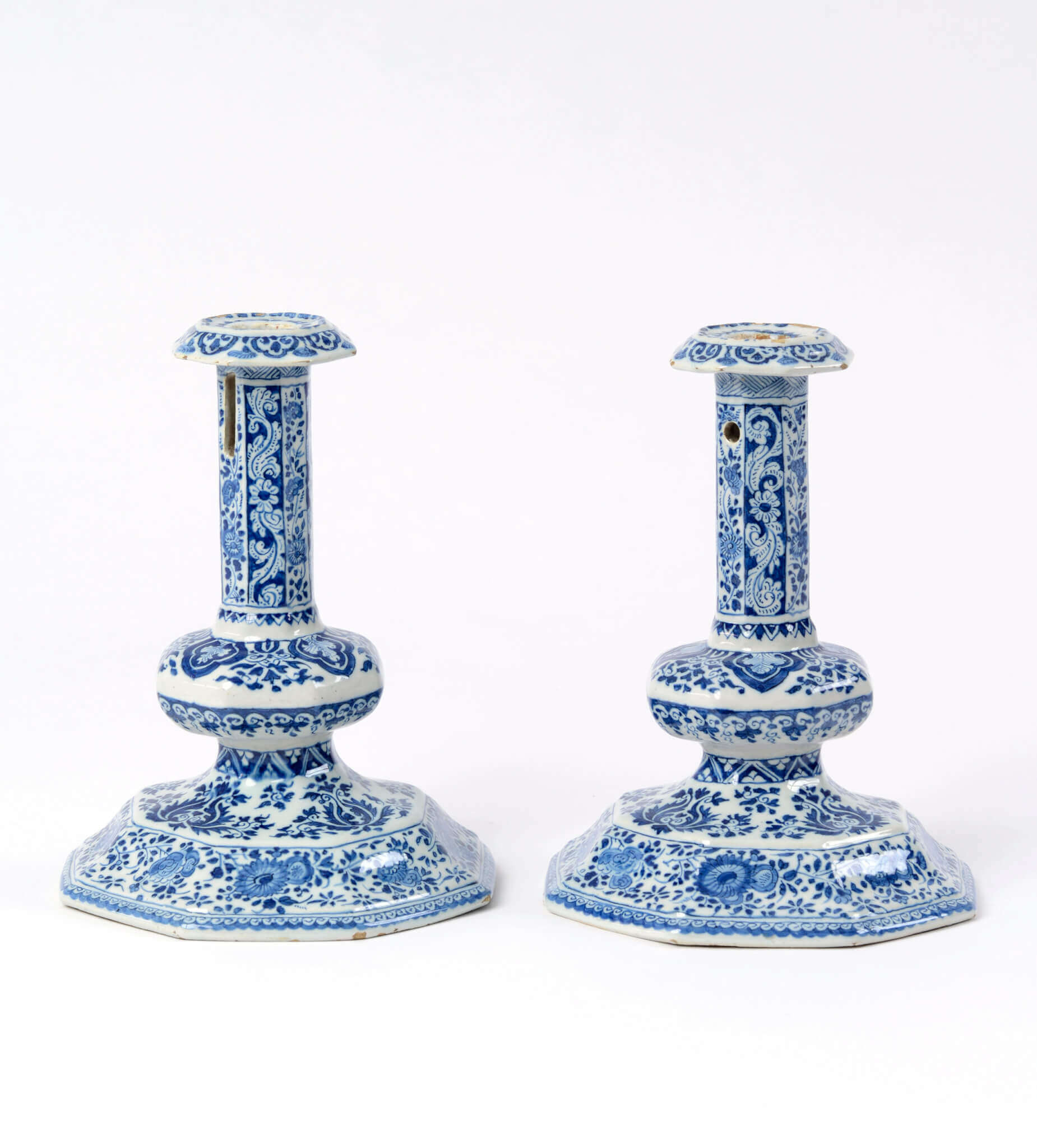 Candlesticks were similarly considered a luxury item, and they gave a particular splendor to the parties and ceremonies of wealthy households. In French King Louis XIV’s Hall of Mirrors, candlesticks were placed in front of mirrors in order to increase the intensity of the light. The objects became much more commonly used during the eighteenth century, when dining habits changed, and the French style of eating later in the evening was adapted across Europe. The new dining style precipitated a greater demand for ornamental candlesticks, as they were both impressive on the dinner table, as well as functional.

There are many types of candlesticks, as they were the primary source of light in all households for hundreds of years. They were produced in all kinds of materials, such as pewter, silver, glass, copper, iron and Delftware. Candlesticks of various shapes were produced in Dutch Delftware since the 1680s. Some of the earliest examples are documented in the inventories of De Metaale Pot (The Metal Pot) and De Grieksche A (The Greek A) factories. These early candlesticks were of square or octagonal shape, and were sometimes executed in white Delftware. This pair of blue and white octagonal candlesticks, from circa 1710, are decorated with a flowering vine motif and marked for Lambertus van Eenhoorn, the owner of De Metaale Pot (The Metal Pot) factory from 1691 to 1721. Each have a bobêche around the nozzle, which were used to catch melted wax running down the side of the candle. This practical feature protected the candle holder, furniture and tablecloths from unexpected drips. The pair of candlesticks has one shaft pierced at the top, while the other one has a slit for wax extraction. 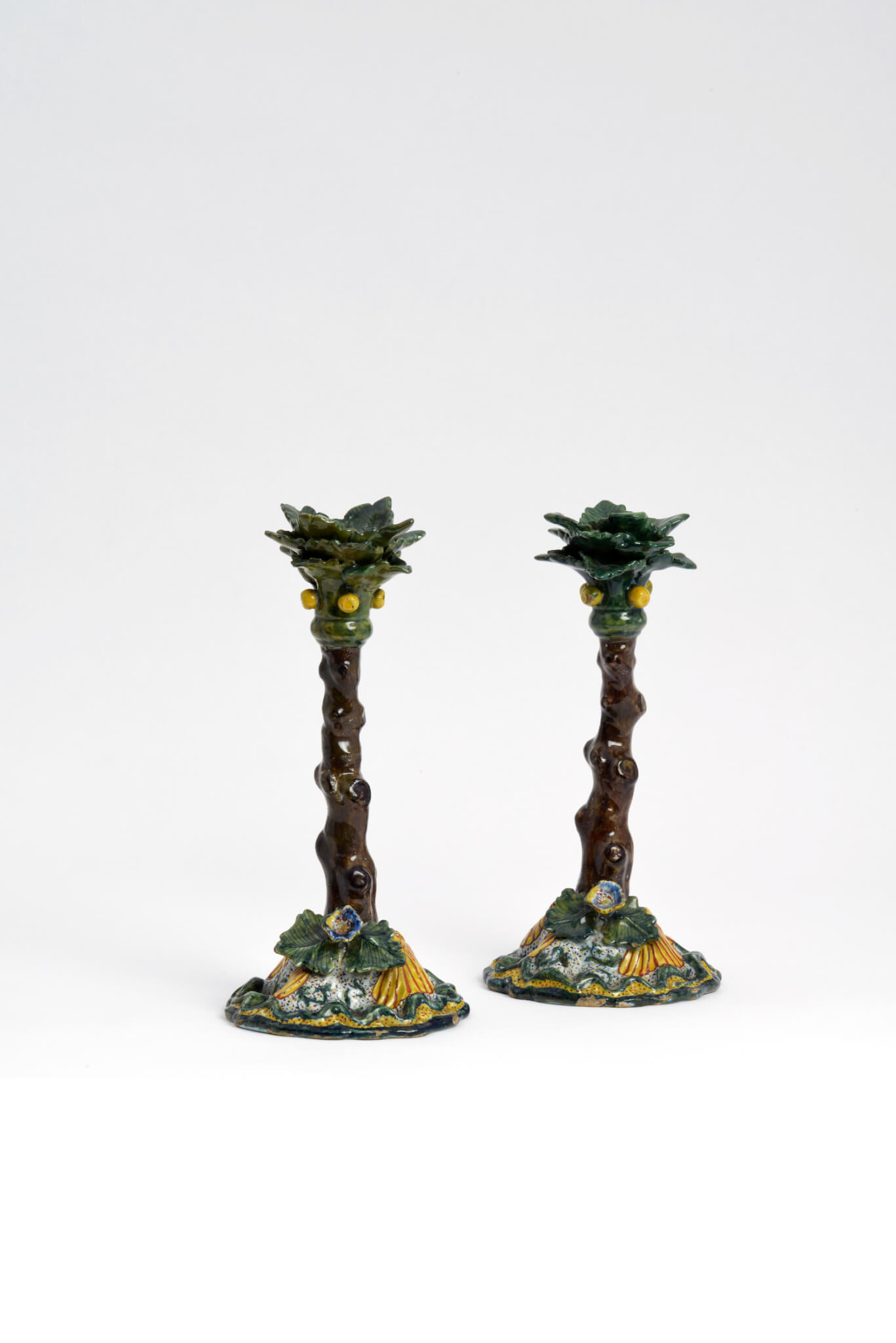 Although the shapes of Dutch Delftware candlesticks have varied from the 1680s onwards, Delft candlesticks are often blue and white with traditional European forms, and are decorated with chinoiserie designs that are borrowed from Chinese Transitional porcelain. This pair of brightly colored and richly modeled candlesticks from the eighteenth century is rare. Marked for De Porceleyne Byl (The Porcelain Axe) factory around 1770, they are modeled as a brown tree trunk growing from a domed foot, and decorated with a large colorful blossom. The shape of this pair of candlesticks draws from rococo silver precedents that were richly decorated with scrolling rocailles, shell, floral, fruit and scrolling foliate motifs. The interest in cultivated nature blends perfectly well with the trompe l’ceil tradition. Since the earthenware candlesticks are smaller in size than the silver examples, it has been suggested that they were probably less suitable for the dinner table. However, these colorful alternatives to the shiny silver must have been a feast for the eyes in other places of the interior.

The Far East was a vivid source of inspiration throughout the seventeenth and eighteenth centuries. Artists and craftsmen created wonderful and intriguing pieces of art that imitated the Chinese, Japanese and Indian treasures, or that combined Eastern and Western shapes and patterns into chinoiserie designs. Small Chinese statues were first brought to the Netherlands in the seventeenth century by the VOC (Dutch East India Company). The objects were transported sporadically, stored in the ship’s cargo as souvenirs or by request from collectors of curiosities. By the eighteenth century, the craze spread throughout Europe, and the figures became a common item in the domestic interior. 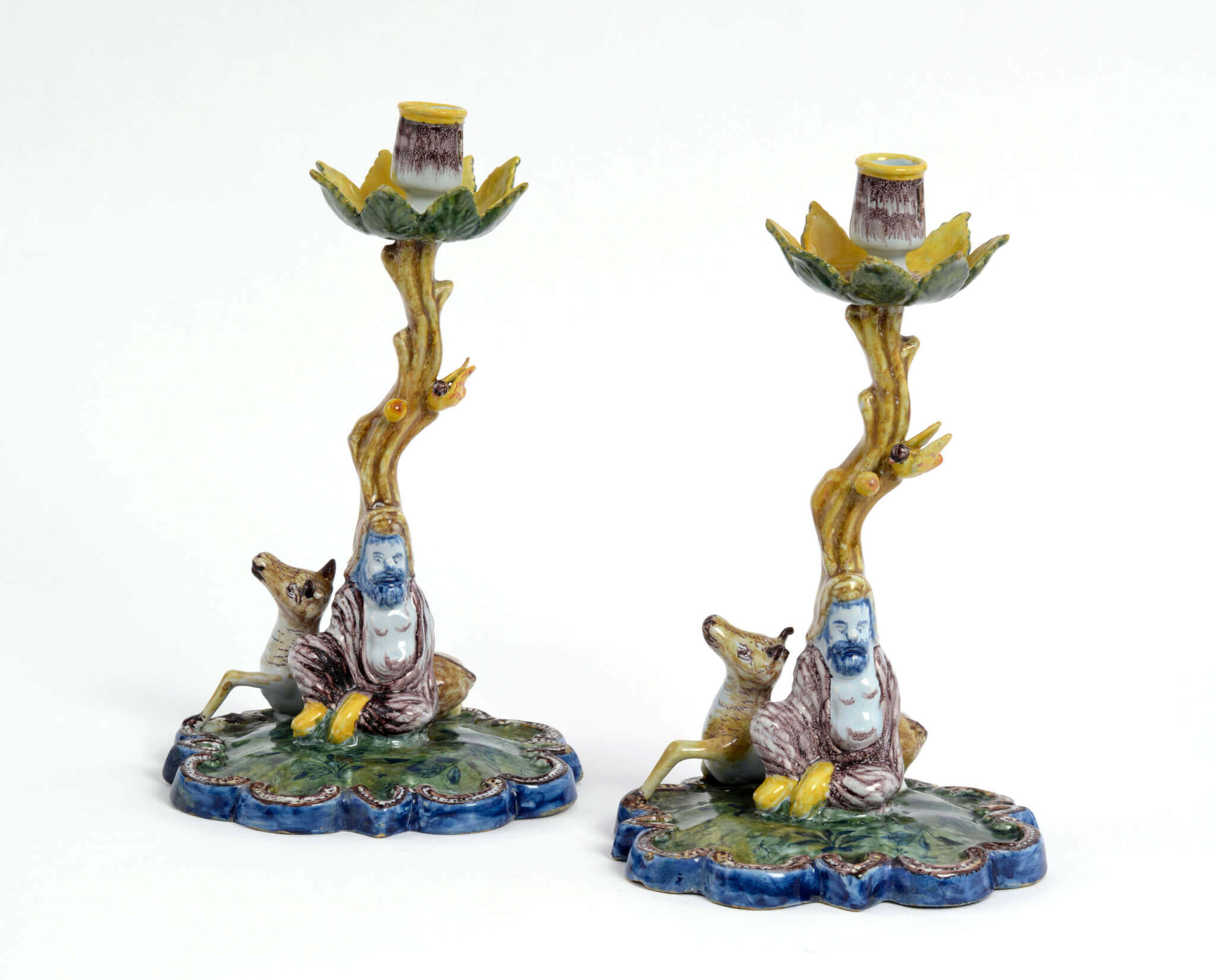 While the objects made in the eighteenth century reflect a more Western style, Delft potters continued to take inspiration from Chinese wares as can be seen in this pair of candlesticks from circa 1780 and marked for Jan van den Briel, the owner of De Grieksche A (The Greek A) factory from 1768 to 1783, or his widow Petronella van der Laan from 1783 to 1796. Shaped as a tree trunk, it is similar to the aforementioned pair of candlesticks. In this example, a blue bearded Chinese figure wearing a manganese robe and yellow shoes, and seated in front of a recumbent deer is modeled on its base. The bearded man seated against the tree trunk is probably the ancient Chinese philosopher and writer Lao Tzu (also named Laozi). Lao Tzu is often portrayed with a deer or a buffalo in Chinese porcelain as well as in bronze wares and drawings. He is known as the reputed author of the Tao Te Ching (The Way and its Power) and the founder of philosophical Taoism, and as a deity in religious Taoism and traditional Chinese religions. However, figures similar to that of the bearded man in a similar pose, holding a staff and accompanied by a deer, a crane or a peach, may suggest that the identity of the present figure is Shoulao (or Shou- xing), the Daoist God of Longevity. In Japan he is known as Jurojin, one of the seven Japanese Gods of Luck. Shoulao is recognized by his tall, oversized forehead representing wisdom and long beard representing long life. Although several Dutch Delftware chinoiserie figures are inspired by Shoulao, this figure cannot be fully identified because it lacks a peach, crane, or staff. Since brightly colored figural candlesticks were highly uncommon, and it is uncertain if figural candlesticks like these were also produced in Chinese porcelain, they are most likely unique objects born of the Delft potter’s creativity and imagination.

The eighteenth century was the great age of candlelight, and the salons of the nobility and gentry were lighted by many hundreds of candles from candlesticks, but also chandeliers and wall sconces. One can only imagine how a well-lit interior with all sorts of candlesticks must have looked like at the time.