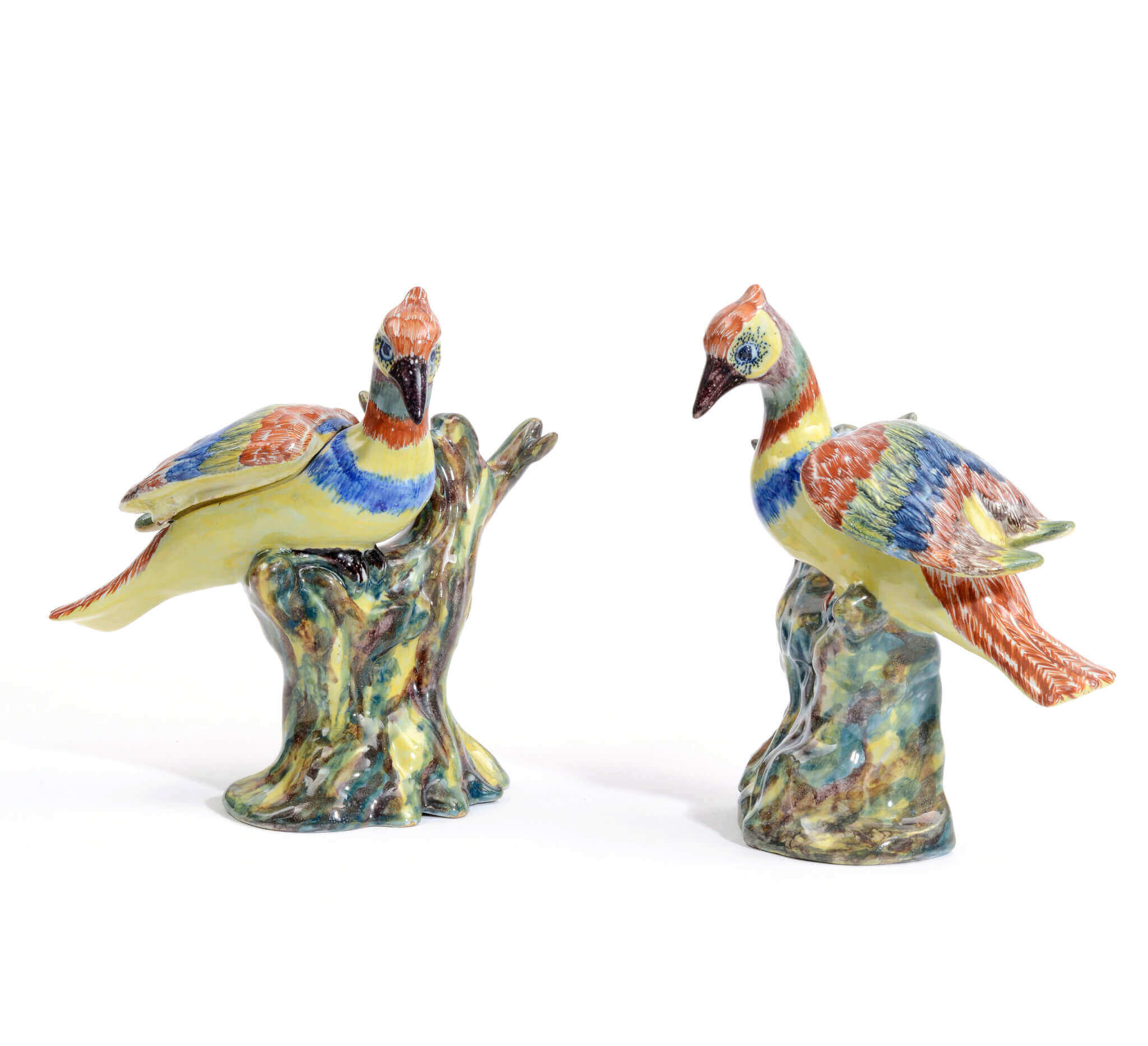 Birds occur frequently and for a variety of reasons in art, as symbols, decoration or objects of study. The symbolism of birds differs in different period and regions. Birds are often encountered in seventeenth-century Dutch genre scenes, in which they usually have a sexual connotation because the Dutch word ‘vogelen’ (birding) means to engage in sex. In medieval books of hours, birds had a purely ornamental function and were incorporated as faithfully as possible in the decorative borders. From the beginning of the sixteenth century birds became the subject of scientific study. Voyages of discovery fueled interest in unknown, exotic species, which was reflected in the first illustrated encyclopedias.

Also in Delftware, birds were a beloved theme. Especially zoomorphic tableware, such as small trompe l’ceil tureens modeled as birds, were a characteristic form produced by Delft potteries. When by the middle of the eighteenth century dining ‘à la Française’ was the fashion in Europe, the range of tableware expanded quickly. This fashion was inspired by the French court of Louis XIV (1638-1715, reigned 1643-1715): the serving dishes were laid out on the table symmetrically and in a very ordered way for each course and guests would serve themselves from the platters, bowls or tureens within their reach. Each course provided an opportunity to display and use a variety of tablewares: plates, serving vessels and a panoply of decorative objects.The potteries in Delft quickly accommodated the new taste of the nobility and the wealthy bourgeoisie for adorning their tables with brightly colored table wares, such as butter tubs and tureens of various sizes and shapes. Amongst them were created true-to-life vessels, such as these zoomorphic tureens. This pair of oval duck tureens, from circa 1770, is marked for Albertus Kiell, the owner of De Witte Starre (The White Star) factory from 1762 to 1774.

Zoomorphic tableware evolved from the savory pie, the showpiece of the dinner table from the late medieval period and the seventeenth-century. Savory pies were stuffed with meat, fish, or poultry and were considered the highlight of a meal. Although there were simple recipes that could be made at home, pastry-cooks were hired to create the most splendid pies for special occasions. These pies were often made with large birds, such as swan, peacock and turkey, and were served with head, wings and upstanding tail. The tradition of the hunt formed the basis for savory pies. Since poultry was a common game hunted in the Netherlands, it was often featured as the main ingredient of many meat recipes. The arrival of the faience tableware and the trompe l’ceil objects in the eighteenth-century also negated the practice of serving a whole animal. Delftware tureens were a perfect, delicate substitute for the bird pies. It is highly probable that these tureens only served a decorative purpose, but if they were used to keep foods warm on the dinner table they were possibly used for stews or ragouts made of poultry.

The majority of the Delft tureens consists of a stand and a separate base with a cover on which an animal is modeled. The models were designed for large-scale production line manufacture, therefore the stand and base components were usually interchangeable. The covers were often modeled after the upper body of an animal and the bases were shaped as nests. Models in which the base and cover form an animal, like these chicken tureens from circa 1760, are more rare.

Not only domestic birds, but also exotic birds formed an inspiration for the Delft potters, such as these birds of paradise from circa 1760. Birds of paradise plumes were some of the most coveted products in Asia and had been part of Asian trade networks for at least 5000 years before Europeans reached the region in the late fifteenth century. Birds of paradise have been the focus of scientific curiosity and aesthetic desire in Europe since 1522, when the only ship to complete Magellan’s circumnavigation of the world returned with five skins of the lesser bird of paradise along with its cargo of cloves. Portuguese sailors later brought bird of paradise skins from the Moluccas (Indonesia) back to Europe. When the skins of the birds of paradise, together with spices and other much coveted objects, arrived in Europe in the sixteenth century, they were rapidly acquired by aristocratic collectors for their curiosity collections. Their richly colored plumes captivated European imaginations, as did their unusual anatomic, for the legs of the birds had been removed during their preservation. This gave rise to European speculation that the birds, unable to alight, must remain perpetually in flight, suspended between heaven and earth. When Linnaeus published the first scientific description of the Greater Bird of Paradise in 1758, he invoked the bird’s initial reception in Europe by naming the species the “footless” bird of paradise. Also in paintings the birds of paradise were a beloved theme. The birds’ exotic and ascendant nature was powerfully symbolic: without their legs the birds were too close to the heavens to be contaminated with the exigencies of the everyday world. However, from the early seventeenth century some European naturalists got access to new kinds of skins that possessed legs and the birds of paradise were becoming terrestrialized.

Also mythological birds found their way into the decoration on Delftware. For example on this vase from circa 1700, which shows two phoenixes.  Delft potters have often drawn their inspiration from Chinese imagery. The phoenix, or fenghuang, is one of the most highly revered creatures in Chinese mythology. The phoenix is believed to be the king of all birds and also a symbol of good fortune. According to Chinese tradition, the sumptuous animal appears to announce the beginning of a new era, and the imagery is often used to commemorate a new emperor’s ascent to the throne. Emblematic of the Chinese empress, it also symbolizes virtue, duty, ritual, compassion, and trust.

It is not surprising that the visual language of Chinese porcelain was also adopted on Delftware, like a pair of polychrome models of parrots from circa 1775. Like many Delftware objects, the ceramic parrots were first inspired by Chinese porcelain wares from the Kangxi period (1662-1722). The porcelain parrots found widespread appeal in both China and Europe for their colorful and exotic appearance, the earliest pieces often in the famille verte palette. Once the figures reached the Netherlands, they found a ready group of buyers. The bird was introduced into the Delft pottery repertoire, joining the more common animal imagery of dogs, cows and horses. The varying colors and shapes of parrots provided the Delft painters with many options for ornamental decoration. Although the first Delftware figures of parrots might be inspired on Chinese porcelain ones, the exotic bird was a mainstay in seventeenth-century Dutch genre paintings. Appearing prominently in domestic interiors, taverns, and markets, these rare birds are painterly evidence of the vast and profitable trade network established by the newly independent Dutch Republic. Among an impressive array of luxury goods imported to the Low Countries, parrots – as the plumes of the birds of paradise – were highly coveted. A wealthy and erudite clientele was eager to indulge its cultural curiosity and purchase such conspicuous symbols of prosperity. Parrots, however, were more than ostentatious displays of wealth and sophistication. These very social and intelligent creatures were, in fact, highly valued companions.

This polychrome petit feu figure of a cockerel is also an example of an object inspired on a Chinese or Japanese original. Cockerels or roosters of this rare and robust model must have been taken from either a late seventeenth-century Japanese Arita porcelain original, or equally likely, a Dehua blanc-de-Chine figure of circa 1700. Given the extensive trade by the Dutch East India Company with both Japan and China at this time, it is possible that either model served as the prototype for the present cockerel. The decoration is most likely to have been inspired by the early Chinese famille-rose porcelains of the Yongzheng Period (1723-35). To achieve this delicate palette on tin-glazed earthenware, the enamels and gilding had to be fired at a lower temperature in a ‘muffle kiln,’ and the technique is referred to as ‘petit feu.’

Besides the link between China and Delft, this pair of duck tureens also forms an interesting link with Meissen. Around 1750, zoomorphic boxes and small tureens were among the naturalistic wares produced in Meissen porcelain, and during the rococo era ‘trompe l’œil’ ceramics were popularized through both Continental and English porcelain and Continental faience. Contemporarily, during the Qianlong dynasty (1736-95), these shapes also were produced in China as export porcelain for the European market. The connection is demonstrated through a pair of Meissen duck-form boxes with heads facing forward, modeled by Johann Joachim Kändler, circa 1740-48, in the Rijksmuseum, Amsterdam and a similar pair in late eighteenth-century Chinese porcelain, in the Peabody Essex Museum, Salem, Massachusetts. The Delft versions could have been made after either the European or Chinese examples, though it is far more likely that the Delft ducks inspired the Chinese Export porcelain examples.

It is unmistakable that birds were a popular theme within Delftware. On the one hand because of the beautiful colors of their feathered deck, on the other hand as a delicate substitute for the poultry savory pies which formed the center piece on the dinner table. These colorful Delftware birds appealed to anyone’s imagination, back in the eighteenth century and still today.