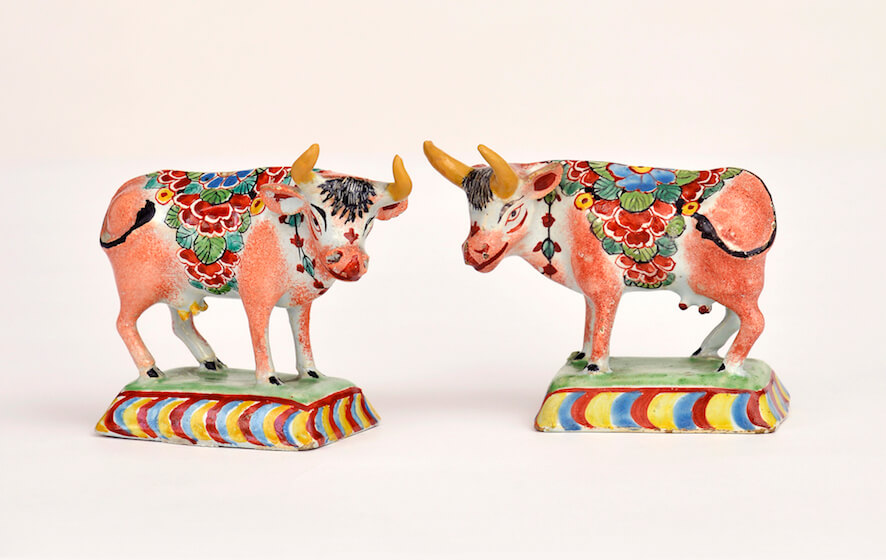 The colorful Imari and Kakiemon Japanese porcelain wares reached the Netherlands between 1660 and 1670. They were immensely popular in the Western market, yielding high prices and inspiring Delft potters to emulate the colorful designs. In particular, Delft potters were driven to reproduce the delicate pastels of the Kakiemon porcelains, experimenting with various color and firing techniques to achieve the Japanese style.[1]

The petit feu firing was one technique that allowed Delft potters to expand their color palette, first used in the beginning of the eighteenth century. The technique requires three firings, allowing the potter to use colors that could not  withstand high temperatures in the kiln during the second firing (grand feu).[2]  The gold and enamel paints were applied after the biscuit firing, the tin glazing and the transparent glaze that added extra gloss (with or without grand feu decorations). With the petit feu colors on top of the glaze, the objects were fired again at a lower temperature (about 600 degrees Celsius) in a smaller kiln known as the moffeloven (muffle kiln).[3] 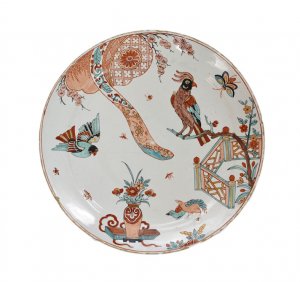 The earliest known Delft petit feu decorations on white earthenware date from after 1720. Johanna van der Heul, the owner of De Grieksche A (The Greek A) factory and the widow of Pieter Adriaensz Kocx, had contracted four gold painters (probably the best that were available) in 1713.[4]  One of these gold painters was Jeremias Godtling (1642-1703), a man who played an important role in the introduction of the petit feu technique in Delft. When visiting Amsterdam in 1676 until 1678 he must have learned more about painting with enamels, possibly in an emaille- or glass painters workshop.[5]  Another painter was Adriaen van Rijsselbergh (1681 – 1735) who after the death of Van der Heul continued his work as an entrepreneur. Several Delft dishes and plates with his AR mark exhibit characteristic representations of the Kakiemon palette, such as quail among flowers and ears of corn. Sets of birds on branches, prunus, bamboo pines and banded hedges were also particularly popular in Delft. While the Delft potters often made faithful reproductions of Japanese designs, they also altered patterns to appeal to Dutch taste. For example, potters added Chinese Kangxi motifs, such as cracked-ice borders with prunus or small Chinese furniture, to the Japanese scenes, which were considered spare for Dutch clients.[6]  The addition of Chinese Kangxi motifs is clearly shown in the plate, illustrated here, which is marked AR for Van Rijsselbergh. It is painted with a bird and insects in flight and a parrot perched on the branch of a prunus tree in a fenced garden, above a brace of quail and a flower-filled vase standing on top of a little table. 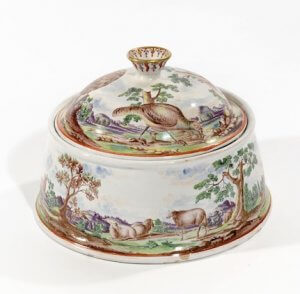 Although the initial source of inspiration for the elaborate petit feu enamel painting came from Asian porcelain, Delft potters also looked to the European-style decoration on Meissen and Sevres porcelain by the mid-eighteenth century. After De Grieksche A factory was sold in 1722, there were only two factories that produced objects in the petit feu technique for a set amount of time.[7]  One of them was De Roos (The Rose) factory, and the other factory was De Drie Vergulde  Astonnekes (The Three Gilded Ash Barrels) under the ownership of Zacharias Dextra from 1721 to 1758. Dextra skillfully led a profitable factory even during a recession. Inspired by the Meissen porcelain wares, he created objects rather similar in shape and decoration with naturalistic flowers, romantic scenes and harbor views. Many of these pieces are marked Z:Dex, such as this petit feu and gilded circular tureen and cover. Dated around 1760, it is painted in shades of brown, green, blue, purple and black on the slightly rounded flaring body with two goats, four sheep and two running hares in a continuous hilly landscape. The domed cover shows a turkey cock and four turkey hens in a similar landscape. 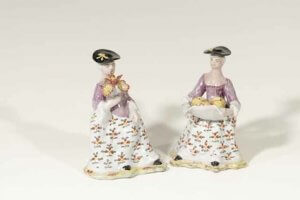 During the Seven Years War (1756 – 1763), there was a decline in imported German ceramics. Thus, there was a great demand for colorful decorative objects for the dinner table and figurative groups. Delftware factories filled this gap in the market by producing polychrome figures with great success.  One example is this pair of small, polychrome petit feu cow figures, made around 1760 in the city of Delft. Each cow is painted with a powdered pale iron-red hide and wearing garlands of iron-red, blue and yellow flowers and green leaves around its neck and back. The pair of petit feu figures of seated ladies is also typical for this time, when Delft potters found inspiration in European subjects. Made around 1770, each woman is dressed in a rose bodice and a voluminous skirt with a yellow back and a white front patterned with floral sprigs and wearing a black hat with a yellow bow. One is holding out her apron filled with yellow fruit shaded in iron-red: an apple, peach and pear; the other is holding a bouquet of five yellow and iron-red flowers. The interest in small Delft figures faded during the last quarter of the eighteenth century; the well-to-do clientele preferred German porcelain to the labor-intensive, and therefore more expensive Delftware in petit feu colors.

[2]  During a grand feu firing, paints consisting of powdered minerals or glass-like substances, would be fired at the same time as the tin-glaze that was applied underneath and the transparant glaze, kwaart, which was applied on top of the colors on the high temperature of circa 1000 degrees Celsius. The paints and glazes would melt and fuse together, becoming part of the actual earthenware object. The used colors were blue, yellow, green, iron-red and manganese.