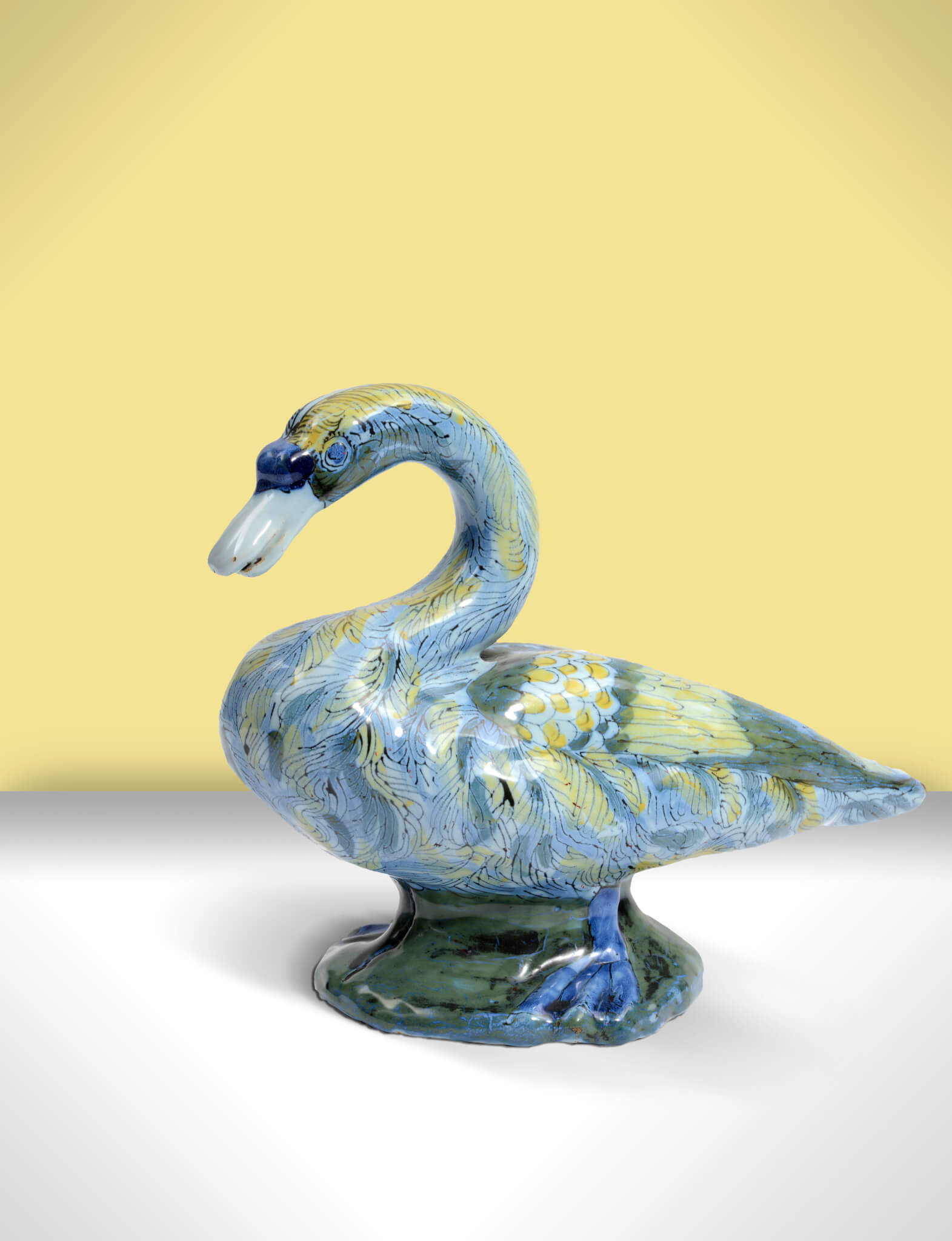 Since the early 1900’s modern ceramics produced in various Dutch and even German cities were popularly called ‘Delft Blue.’ These objects continued the successful tradition of seventeenth and eighteenth-century products from the city of Delft. While the antiques gained attention from both national and international collectors and researchers, the modern factories grew their assortment and also produced similar objects with other color schemes and named them accordingly, i.e. Delft Red or Delft Green. The blue and white objects were however much more sought after and the name ‘Delft Blue’ stuck. The name soon became interchangeable between the modern and antique ceramics, however we refer to the antique objects as ‘Delftware.’ In turn, the popular term ‘Delft Blue’ means that nowadays many people are surprised that factories in Delft also made multi-colored, or polychrome objects in the seventeenth and eighteenth centuries. The expanded range of colors, mainly after 1700, was rapidly supplemented by a range of forms, decorations and firing techniques. This is how Delft remained the market leader throughout most of the eighteenth century.

The origins of Delftware lie in the early sixteenth-century richly colored Majolica wares, the first consumer pottery in the Netherlands. These objects were inspired by Southern European pottery, which is the reason why the use of color and the designs look very Spanish or Italian. The city of Haarlem emerged as the leading majolica centre. Multiple inventories show that forty-five potters had settled there and the production of majolica increased proportionally. Although it is impossible to identify and attribute the work of the forty-five potters in Haarlem, there is one exception: the wares of Willem Jansz. Verstraeten, who is considered the most important potter in Haarlem during the second quarter of the seventeenth century.

The arrival of Chinese porcelain, that came to the Republic with the Dutch East India Company (VOC) in the seventeenth century, however reduced the demand for Majolica. The blue and white porcelain wares were highly in vogue and therefore the Dutch potters decided to imitate the much-loved blue and white porcelain wares. In order to do so, they had to overcome both stylistic and technical challenges to imitate porcelain. These developments took place around 1620, with the cities of Haarlem and Delft playing leading roles in this process of innovation. These technical innovations were not all made simultaneously as the wares have qualities of both majolica and faience. In the second half of the seventeenth century the city of Delft took over from Haarlem in creating Delftware in which pottery painters adapted the sceneries on both Chinese Kraak and transitional wares for their own decorations. A unique type of decoration evolved from these different Chinese styles, which shows the Delft interpretation. Chinese figures, landscapes, architecture and attributes are rendered and composed in a way that is not Chinese, but semi-Chinese: Chinoiserie. This style originated in the seventeenth century and quickly became a dominant fashion throughout Europe, enduring through the first half of the eighteenth century. The faience painter choose especially the elements which were in his eyes the most characteristic for the exotic Far East and he combined it as he wished. Delftware is one of the first Dutch examples of Chinoiserie, which through its export contributed to the development of the style in Europe.

By the end of the seventeenth century, many potters reached such a mastery of skill and perfection that they began experimenting with new forms and techniques. This resulted in the application of several color palettes on the formerly blue and white Delftware objects. Color schemes as cashmere, which was inspired on Chinese famille verte, and after the Japanese wares Imari and Kakiemon style objects made their appearance on Delftware. Besides the alterations of color schemes, the Delft potters also capitalized on the successful Yixing stoneware teapots, and several Delft potters imitated the fashionable red stoneware. However, the potters faced several technical problems before achieving results. The composition of the clay had to be perfected in order to make watertight, unglazed pottery. Another ingenious result of this experimentation was the creation of colored background pieces. Inspired by Japanese lacquerwork the objects were manufactured in a black, brown and olive ground. Some factories also created objects with a blue background, after the faience from Nevers. On top of this glaze, a decoration was painted in a lighter color.

The range of colors seen on eighteenth-century Delftware was achieved through various techniques, using skills honed throughout many years. Not every paint color could be realized in a single firing process, and there were often several rounds in the kiln. Ceramics painted with grand feu colors of blue, green, and yellow were fired at a high temperature of about 1000 degrees Celsius (1800 degrees Fahrenheit). Ceramics were painted with grand feu colors but the Delft potters also developed new colors using the enamel technique. First used in the early eighteenth century, the so-called petit feu firing was one technique that allowed Delft potters to expand their color palette. The technique requires three firings, allowing the potter to use colors that could not withstand high temperatures in the kiln during the second firing (grand feu). The gold and enamel paints were applied after the biscuit firing, the tin glazing and the transparent glaze that added extra gloss (with or without grand feu decorations). With the petit feu colors on top of the glaze, the objects were fired again at a lower temperature (about 600 degrees Celsius / 1100 degrees Fahrenheit) in a smaller kiln known as the moffeloven (muffle kiln). The painted objects were very colorful and delicate, however the additional firing made them expensive to produce and sell. Another technique to apply colors to the white glazed wares was with a so-called cold painted decoration. Unlike the lengthy and expensive process of the grand feu and petit feu colors, the cold painted wares were not fired after they were painted and therefore more economical. It is extremely rare to find objects that are still completely decorated in the cold paint technique. Their rarity can partly be explained because of the popularity of white Delftware at the beginning of the twentieth century, whose scarce fragments of cold painted decorated were removed.

Despite all these techniques to add color to the Delftware objects, white undecorated Delftware was also very fashionable during the seventeenth and eighteenth centuries. Although these objects were less expensive to produce than the blue and polychrome Delftware, the objects were initially only affordable to the upper class. By the end of the seventeenth century, white Delftware was more commonplace and affordable as factories produced greater numbers of white kitchenwares for everyday use. The factories also manufactured decorative white objects of figures and animals that were displayed on a mantelpiece. Further, the Delftware painters also still created blue and white objects as they started in the seventeenth century. However, the style of decoration of the seventeenth-century objects often exudes an Asian atmosphere, but from the mid-eighteenth century onwards the potters turned the focus on a more European formal language. Not only the type of decoration shifted to a more Western pattern, but also the shapes of the objects.