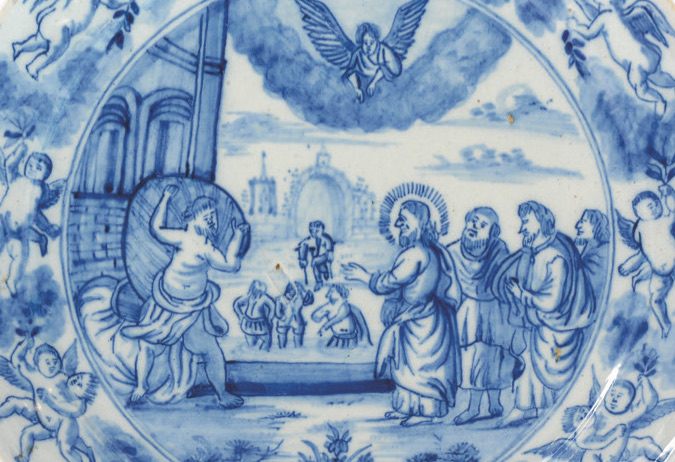 The Eighty Years’ War (1568-1648), or the Dutch War of Independence, transformed the Netherlands and gave birth to the Dutch Republic. The war grappled with freedom of religion and conscience, the right to self-determination and the right to participation. The leitmotif of the war was the emerging reformation and the fact that the Spanish king, who ruled in the Netherlands, continued to cling to the exclusive right of the Roman Catholic Church. The Dutch Revolt largely determined the conventions; where the Netherlands used to be Roman Catholic, the Republic became largely Protestant.1

Although the Golden Age was considered a tolerant time, religious freedom was mostly reserved for the Calvinist Reformed Church. There was little tolerance shown towards other denominations. The Dutch were expected to convert to the Dutch Reformed Church. However, people and groups considered as foreigners, such as the Jews, were able to practice their religion freely. Dutch Catholics were the greatest minority and were forced to live on the margins, but they were “tolerated” and not expelled or killed as happened in England and Scotland.2 All churches were confiscated, so Catholics and followers of other forbidden religions practiced their faith in hidden and illegal churches in existing buildings.3

The public worship of images was prohibited under the Dutch Reformed Church. Therefore, Catholics practiced their faith at home and decorated their houses with Biblical objects. Delft factories produced a range of Biblical objects, from entire domestic altars for wealthy Catholics, to smaller statues like this blue and white group of the Madonna and Child. The Virgin is wearing a tall crown and a necklace suspending a small cross. In her left arm she is supporting the seated and scantily draped Christ Child holding an orb with his left hand and reaching up with his right hand to touch her hair. This group is marked for Jan Pennis, the owner of De Porceleyne Schotel (The Porcelain Dish) factory from 1724 through 1764. Remarkably, two other groups of the same model are known, one in the Rijksmuseum, Amsterdam,4 the other in the Evenepoël Collection at the Musées Royaux d’Art et d’Histoire, Brussels,5 both marked for Jan Gaal, the owner of De Twee Scheepjes (The Two Ships) factory from 1707 until 1725, or his widow Lijsbeth Gaal van der Plank from 1725 through 1727. These two other groups developed under Jan Gaal were perhaps the model for the present figure. Jan Pennis must have acquired them later, as his son Anthonij Pennis was one of the later successors of Jan Gaal as owner of De Twee Scheepjes from 1750 to 1770 (Pennis’s widow continued the ownership until 1782), and his production assortment also included many figures.

Although it was not the image, but the word that was central to the interest of the Dutch Reformed people of the seventeenth and eighteenth centuries, some nuances should be added. Many publications of the Bible were illustrated with prints, and even separate picture Bibles were produced, which brought the scenes to a wide audience. Painters, engravers and etchers created Biblical illustrations, which were included or bound in the text in the new Bible editions. The Delftware factories also took an interest in Biblical subjects and applied them on Delftware. These objects were purchased not only by Catholics, but also by Protestants for visual support of the Bible.6 Decorative plates and plaques with biblical scenes, which were intended to be displayed on etageres, in glass cabinets or on walls, were part of the varied output of the Delft factories.

This blue and white charger from circa 1660 illustrates the influence of Biblical prints for Delftware painters. The plate depicts the sacrifice of Isaac, from Genesis, chapter 22, verses 11-12. In this scene, the angel holds the hand of Abraham as he wields his sword to slay his son Isaac, beside a steaming cauldron and a goat caught in a bush. The imagery on this charger is taken from a print by Egbert van Panderen after Pieter De Jode from circa 1590 – 1637. This biblical scene is also shown on another blue and white large dish from circa 1679. In the later design, the angel appears to Abraham as he raises his sword to slay his kneeling son, with a steaming pot to the left and the goat lunging toward shrubbery in the foreground. The story was one of the Old Testament’s most powerful examples of obedience and faith. Abraham was commanded by God to sacrifice his son Isaac. The father and son traveled to Moriah, where Abraham told Isaac that they would make a burnt offering of a lamb. After he had constructed an altar with wood, Abraham bound Isaac and placed him on the altar. As he was about to slay his beloved son, the angel of the Lord appeared and stopped him, saying, “Abraham, Abraham! Lay not thine hand upon the lad, neither do thou any thing unto him: for now I know that thou fearest God, seeing thou hast not withheld thy son, thine only son from me.” At that moment, Abraham spied a ram in a nearby thicket, and he caught the animal and sacrificed it instead of his son.

Scenes from the New Testament were also depicted on Delftware, from the life of Christ to the passion story. A pair of polychrome biblical plates from circa 1770 shows Jesus seated with another figure on a river bank with trees and a radiant sun in the distance. They are inscribed with Hoe hand got geschapen landt no. 2” (How God created land), or “In haar eerste stond mag komen no. 5” (May come in the first hour) within the decorative iron-red ground border with yellow and manganese blossoms, green foliate scrolls and manganese-delineated putti. The rim further shows biblical panels of a sower on the land and a banderole inscribed “Mattheus 13” (The Parable of the Sower), and at the sides with a panel showing Jesus conversing with a person above a banderole inscribed “Psalm 73 v26” (My flesh and my heart may fail, but God is the strength of my heart and my portion forever). Various dishes with a similar border, and a decoration in the same style, most likely from the same graphical source are in the collection of Kunstmuseum The Hague.7

The above shows that despite the rise of Protestantism, secret churches and houses of Dutch Catholics were nevertheless decorated with objects with biblical scenes. Although the Delftware factories may have had objects with Biblical images in their assortment, it is more likely that these were specially commissioned by Catholics who wanted to secretly practice their faith at home.

1 Local politics were probably also a determining factor in the denominational relations. Where stalwart Calvinist pastors had a great deal of influence on urban government, the percentage of Catholics was lower than where tolerant regents offered some counterbalance to the pastors. This explains why large numbers of Catholics could occur in neighboring cities. In Alkmaar in the first quarter of the seventeenth century, 45% of the population was Catholic, in nearby Enkhuizen only 5%, in Delft 35%, compared to Dordrecht only 13%. C. Caspers, Reviewed Work: C.H. Parker, Faith on the Margins: Catholics and Catholicism in the Dutch Golden Age, 2011, pp. 321-322
2 When measured by modern standards, we must conclude that the Republic was not tolerant at all. The Roman Mass was prohibited, as was attending any Catholic gathering, teaching Catholic doctrine, distributing ‘papist’ literature, studying at a Catholic university (abroad), having a priest perform baptism or marriage, wearing devotional objects such as rosaries, and so on. Some city governments were so fanatical in stripping the vestiges of ‘popish idolatry’ that they even forbade the public sale of cookies fashioned in the image of St. Nicholas on his feast day, December 6.  Caspers 2011 (note 1),  pp. 321-322
3 These clandestine churches were initially met with opposition by authorities, but governments became increasingly pragmatic. It was clear that a large part of the population would never join the Reformed Church, and many government officials themselves had only converted to the official church in order to maintain their jobs and social position. The use of secret churches was therefore increasingly permitted. Initially, they were blindly tolerated, but groups could later obtain an official license in exchange for an annual payment of huge sums of money, the so-called recognition fees. Caspers 2011 (note 1),  pp. 321-322
4 Inv. no. BK- NM-13344, illustrated in F.W. Hudig, Delfter Fayence, Ein Hand-buch für Sammler und Liebhaber, Berlin 1929, p. 184, fig. 176
5 Inv. no. Ev. 348, illustrated in J. Helbig, Faïences Hollandaises, XVIIe- XVIIIe-début XIXe s., Volume I, Musées Royaux d’Art et d’Histoire, Brussels (no date), p. 79, ill. 50
6 J. Pluis, Bijbeltegels, Bibelfliesen, 1994, p. 15
7 Inv. no. OC(D)220-1904