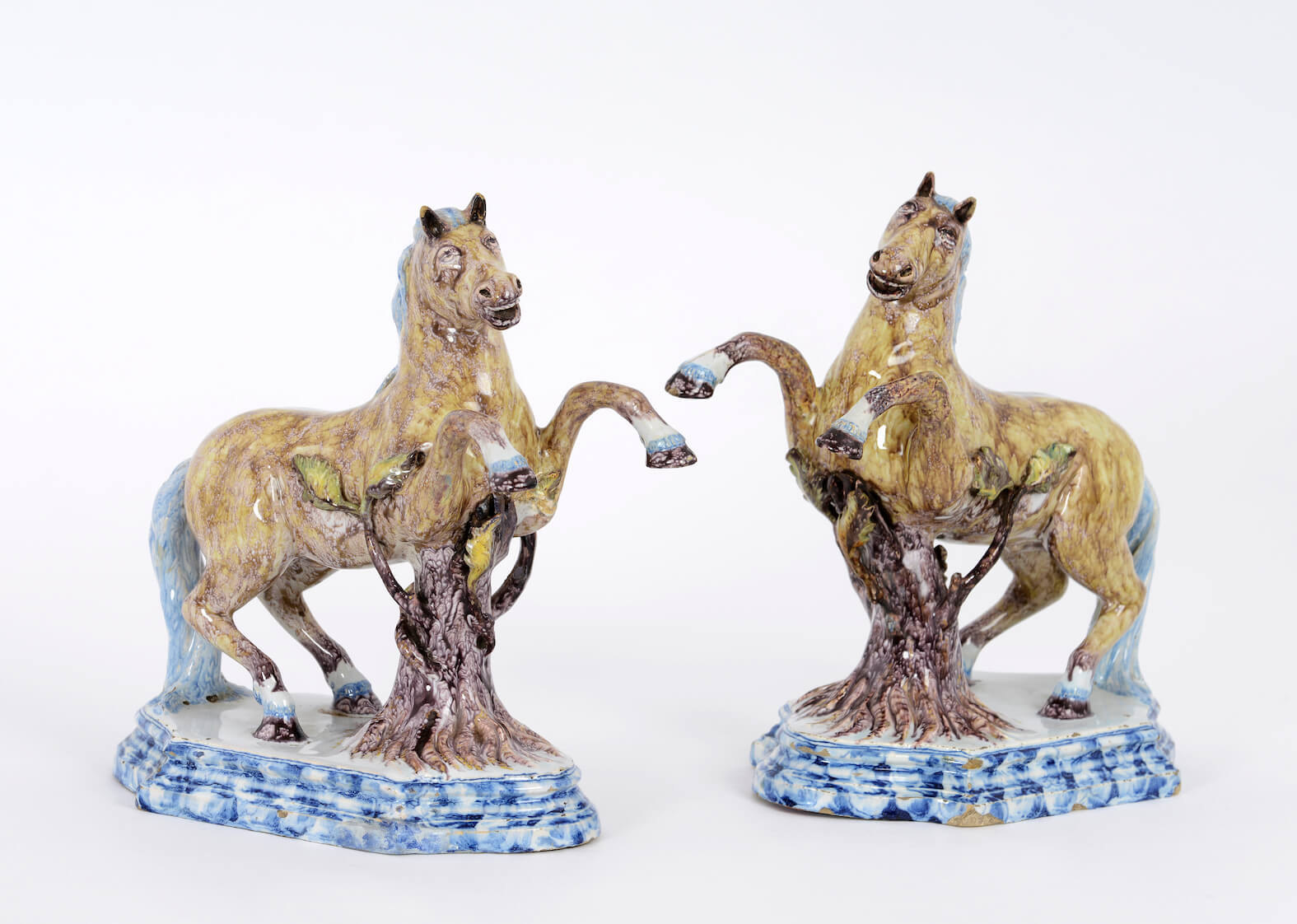 From the mid-eighteenth century onwards it was the fashion to decorate the interior with Delftware models of animals. This custom was a result of Delftware becoming a popular consumer good in the late seventeenth-century, mainly under influence of Mary II (1662-1695), the English consort of King-stadholder William III (1650-1702). The coveted Delftware blue and white objects, such as vases, ewers and dishes, often had the function of consumer goods, although they probably had a purely decoration function. In the eighteenth century more and more polychrome objects with only a decorative function were placed in the interior, such as Delftware figures of animals.

These often brightly colored Delftware animals found a ready market in the Netherlands, customers for whom the German porcelain was too expensive or perhaps too refined. A number of factories must have been producing an enormous output.[1]  However, making these figures was a complex and expensive process, and production did not get underway in Delft until after about 1685. A carver was required who made a model in wood or perhaps shaped one in clay from which ceramic molds could be cast. The different parts of a figure, which were made of thin plates of clay shaped in a mold, were joined together with clay paste.[2]  Although it was already customary in the Netherlands to display these objects as ornaments in glass cabinets, mantelpieces or on etageres, the arrival of the porcelain factories in Germany might also have contributed to this. Despite their individual attraction, the figures mostly came into their own when they were displayed in a large ensemble.[3] 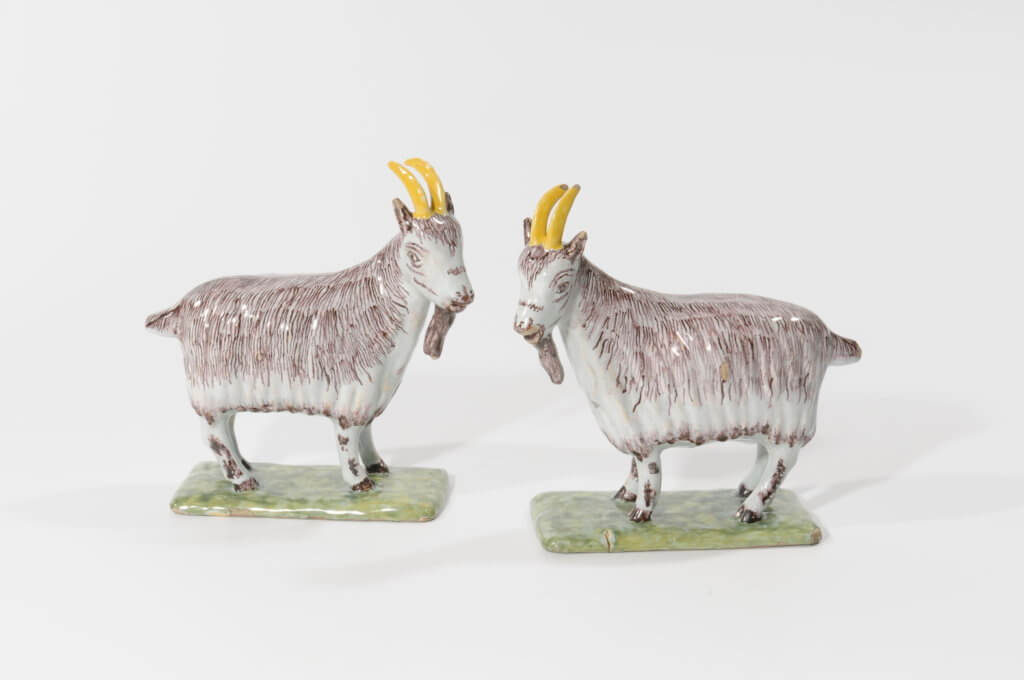 Changes in the interior design of homes, other eating habits, a new fashion – these were all aspects of life that the faience manufacturers in Delft had to take into account in the eighteenth century.[4]  No longer served Chinese porcelain as the only inspirational source. The first decorative figures were produced after Far Eastern examples. While especially on the modeling of animals, such as parrots and roosters, the Chinese influence is obvious, the color palette varies slightly. The Delft painter would often substitute bright colors for the Chinese colors, such as the famous aubergine-purple. However, a different style gradually appeared during the second half of the eighteenth century, certainly under the influence of various foreign faience and porcelain factories.[5]

Although direct Far Eastern influence continued without interruption until the end of the eighteenth century, various elements from European faience and porcelain production made themselves felt at dates not always easy to decide.[6]  Possibly following the German example, which set the trends in the porcelain industry, in the third quarter of the eighteenth century, the Delft potters started to make huge numbers of figures and figurines of varying sizes, almost always producing the objects in pairs. This influence was manifest in various guises, either in the choice of subjects or in the colors utilized.[7]  The ceramists apparently were especially inspired by the animals that were produced in Höchst under Johannes Zeschinger.[8]  This influence does not have to be surprising, given the large number of German and French colleagues who came to work in the Netherlands for a short or longer period. Although the potters in general rarely ventured off the beaten track, sometimes extraordinary pieces in both quality and execution were made during this period. 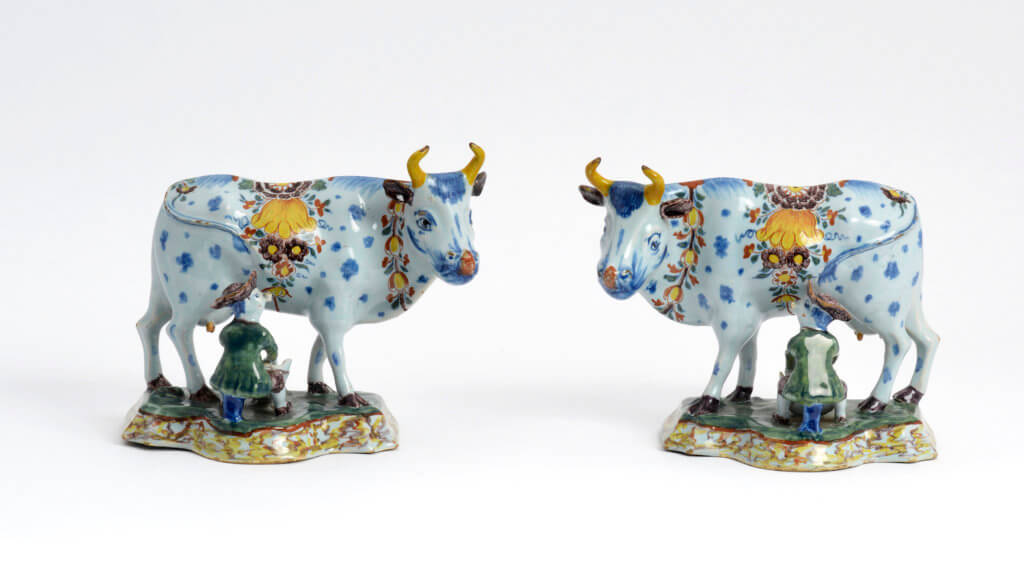 In the eighteenth century, Holland was an agricultural region, a history that is often reflected in Delftware animals. Among the most prolifically produced were the farm and domestic animals. The representations of animals are famous: horses, cows, dogs and goats. Everyday life formed an important inspiration for the Delftware potters. Besides the more common farm and domestic animals, also colorful parrots and even monkeys were produced. Further, the potters also kept joyful traditions in honor. For example, the figures of cows which are almost always painted with lavish swags of floral garlands draped around their necks and backs. The Delft potters were inspired by the seventeenth-century tradition of the Butcher’s guild parade, which was a real feast and which lived on in the imagery of these Delftware cows a century later. The combination of this seventeenth-century tradition and the potters’ own contemporary dairy farming is showed in garlanded cows which are being milked by a milkmaid or youth, such as this pair of polychrome milking groups from circa 1760. Marked LPK for De Porceleyne Lampetkan (The Porcelain Ewer) factory, both garlanded cows are being milked by a pipe smoking youth, who is wearing a green coat and manganese breeches and hat. 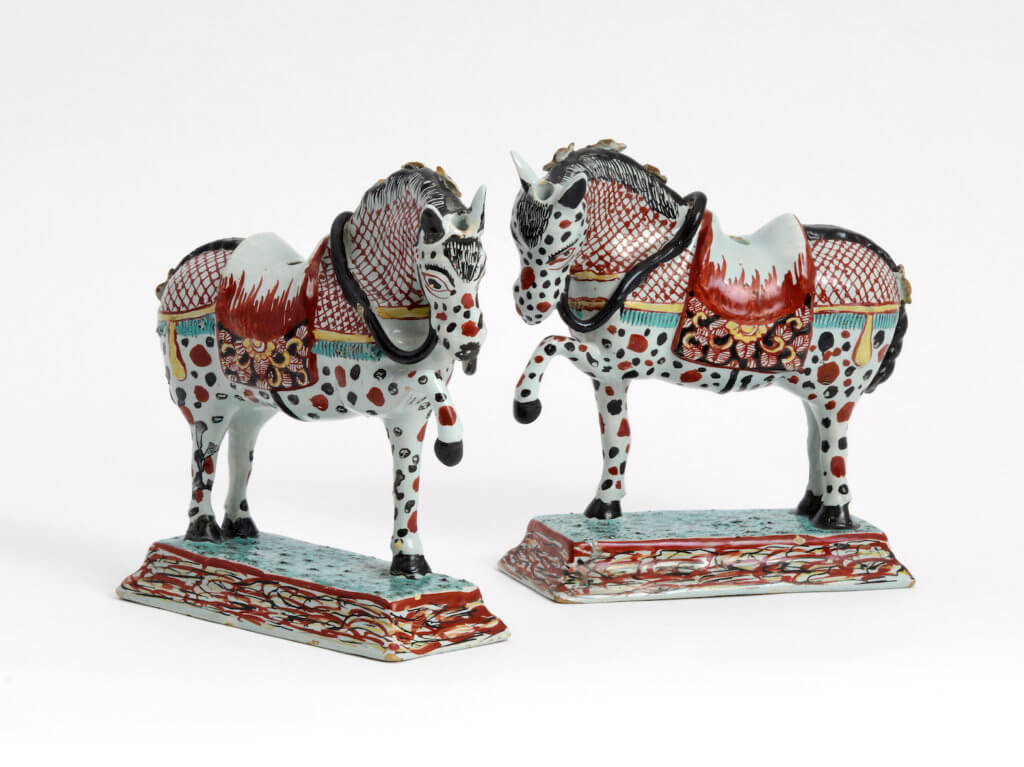 The imagination of the Delft potters, who brought such fantasy to all their work, led to the appearance of these many varied and joyful figures of animals. Also imageries of novelties, such as these polychrome petit feu caparisoned circus horses from circa 1790, were enthusiastically adopted into the repertoire of the Delft potters. This model relates to the arrival of the first modern circus in Holland, a novelty created by Philip Astley, an English sergeant who showcased his horse riding skills inside a large arena. In one of his most successful tricks, Astley circled the ring on horseback with swarms of bees covering his hands and arms like a muff. He eventually included singers, dancers, and clowns to his theatrical performance, receiving rave reviews. Astley brought his successful act to Paris in the 1770s, and its popularity swept throughout Europe.

The popularity of the Delft animals in the eighteenth century is also apparent from the fact that while the early Delft figures were based on oriental prototypes, Delft faience models of recumbent cows and horses were also copied in Japanese porcelain.[9]  One of the icons of Dutch Delftware, the standing cows decorated with floral garlands, were even copied in Chinese export porcelain for commissions placed by the Dutch East India Company in the mid eighteenth century.[10]