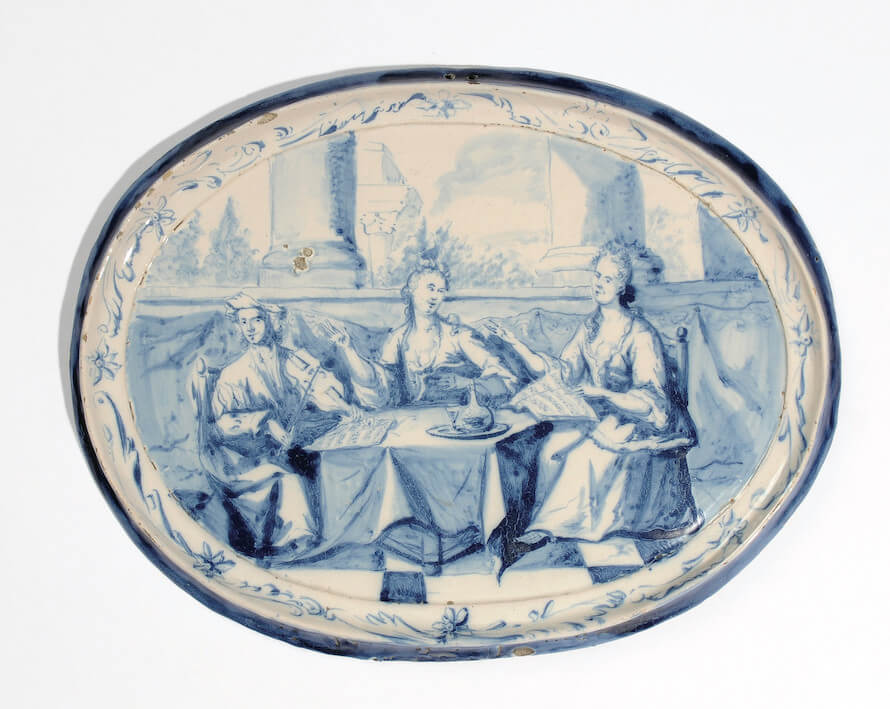 The daily activities of women were commonly depicted in seventeenth-century Dutch genre paintings. These scenes, from a housewife quietly absorbed in work, to a woman enjoying musical entertainment illustrate the societal roles of women in the domestic space. In these private spaces, women acquired a new importance. While for some painters the home was the setting for maternal and domestic tasks such as needlework, others projected a new type of woman who was better educated than her predecessors and more absorbed in her interior life. These women were shown at their toilet or organizing musical parties within elegant homes. Genre paintings were highly in vogue in the Low Countries, and Delftware painters quickly adapted similar themes for decorative earthenware. 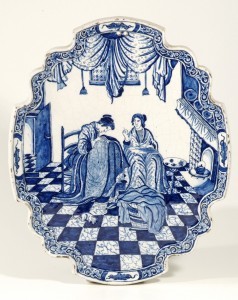 This blue and white oval-shaped plaque, from circa 1745, shows an interior scene of two ladies seated beneath a draped window and sewing a garment. At their feet is a basket of cloth, a yardstick, scissors and a sleeping cat. On the right is a tea table set with a teapot, a bowl, two cups and saucers near a kettle on the hearth with plates lining the chimney above. The decoration on this plaque is taken from the engraving, Two Women Sewing, by Geertruydt Roghman (1625-1651/57). It is the first from a series of five feminine occupations or Women at Domestic Chores, dating to circa 1648-50, which includes images of women ruffling, cooking, spinning and cleaning.[1] The series was both designed and engraved by Roghman herself and published by Claes Jansz. Visscher II. The Delft painter took some liberties in designing the plaque. The candleholder situated at the left on the print was excluded, and several additions were made. The artist included conventional Dutch imagery of the interior for the contemporary audience, such as the draped curtains, the window and the cat on the checkered tile floor. The artist also added elements, such as the tea table with cups and saucers, a small teapot, the tiled fireplace surround with a water kettle on the hearth and plates or dishes on the chimney piece. The busy composition was meant to suggest domestic unity, however it also resulted in a loss of accurate proportions, as in the minuscule door at the left. 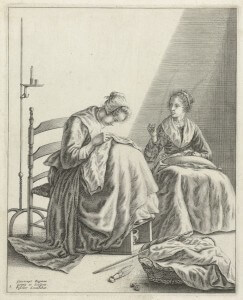 Needlework was a common activity featured in Dutch art and Delftware, and is seen on the present plaque and accompanying print. Moralists often praised the housewife’s ability to do needlework as it represented diligence and a woman’s domestic virtue. The young woman in the foreground is married, symbolized by her clasped hand on her cap. In contrast to the print where she wears modest clothing, the Delft plaque painter applied a more detailed and sumptuous dress. The woman is intensely focused on her work, and represents a perfect depiction of femininity and domesticity. Although genre paintings are intended to represent reality, the depiction of domestic virtue in seventeenth century Dutch genre paintings is probably not an accurate representation of everyday life.[2] 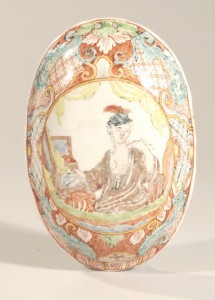 Another popular subject in Dutch genre painting of the second half of the seventeenth century was of a woman at her toilet. The image of a woman at her mirror can be read either as a symbol of pride and lust, or simply a pleasurable and intimate feminine ritual.[3] Considering the popularity of women’s domestic preoccupations, it is no surprise that these discreet glimpses of a woman at her toilet became a favoured theme. This Delft petit feu and gilded brushback, from circa 1730, is painted with a lady at her toilet. The lady is wearing a plumed hat and a décolleté robe. She is seated before her dressing table, on which an open toiletry box is displayed. The delicate scene of a lady primping and preening, adjusting her costume, or dressing her hair perfectly matches the function of the Delft object. Brush backs are a relatively rare utilitarian object from a line of specialty goods produced by Delft potters in imitation of their more expensive silver prototypes. They were made by binding small clusters of horsehair with thread and then affixing the clusters with resin to the interior of the pierced holes on the underside of the back. Intended as clothes brushes, these practical objects were often given as bridal gifts.[4]

In the seventeenth and eighteenth centuries, Delft was a prosperous town with several thriving industries including many breweries, the famous Delftware, and tapestry weaving. Delft’s wealthy burghers were proud of their new refined lifestyle which allowed for many activities of leisure, such as music making. Genre painting also included scenes of women engaged in leisurely activities. The most frequently depicted subject is of women playing music or dancing. In the seventeenth century, music was an integral part of Dutch culture at all levels of society. In sophisticated circles, intimate musical gatherings were not only a pleasurable means for escaping everyday cares, but a popular and widely accepted social activity for members of the opposite sex.[5] Pictures of fashionable young people making music in interiors were quite popular and often appeared on the covers of songbooks. What is striking about such paintings is the conventionality of their subject matter. They almost all consist of elegant young men and women who sing and play music in well-appointed interiors, using ornately designed instruments.[6] 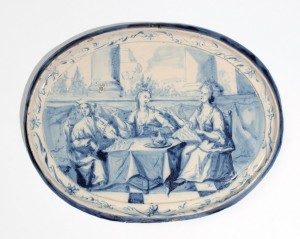 The blue and white oval plaque, from circa 1740, was made in Amsterdam. It is painted with a merry company playing music and enjoying wine. A fashionable lady is seated between a man playing a violin from a musical score and a gesticulating lady who is holding another score. They are seated at a cloth-covered table, set with a wine glass and bottle on a tray. Although the interior is composed of a typical Dutch checkered tile floor, it lacks a Dutch feel because of the draped wall supporting a colonnade before a classical building in the distance. The earthenware painter was probably inspired by classical landscapes, rather than realistic Northern European interiors. Interestingly, the decoration on the plaque combines music and wine, which was a frequent combination in paintings and often signifies seduction. Of course, the relationship between music and love has long existed in art, and the use of musical harmony as a metaphor for harmony between two lovers was common. Perhaps the gentleman and a lady in the scene are in an amorous relationship, as suggested by the music making and the bottle of wine. However, these scenes do not always contain a hidden message, and many times the meanings are lost today.

[2]  “Pictures do represent plausible realities, but these realities were fundamentally structured by a culture that privileged males. They therefore resonate with an entire set of values, ideals and even prejudices, all of which reflect common attitudes toward women at the time.” This even extended to style, as in portraiture in which “a different aesthetic governs the representation of women as opposed to men.” W. Franits, Vermeer, 2015, p. 196.

[3]  M.E. Wieseman on the painting Woman Seated at Her Toilet by the Studio of Gerard ter Borch, oil on panel, The Leiden Collection (inv. no. GB-107).