Genre painting enjoyed enormous popularity in Northern Europe, particularly in the seventeenth century, and especially in the Netherlands. Many of the Dutch practitioners elevated what was once considered a humble art form into a desirable subject, which even rivalled classically esteemed subjects such as history paintings. Genre painting depicts aspects of everyday life. Although subjects widely range, there are several reoccurring themes. One of the more common themes found in genre paintings and prints was the depiction of craftsmen. Delft painters relied on genre art and prints for source material, therefore many plaques and plates are similarly decorated with typical seventeenth century professions.

It is noteworthy that the depiction of agricultural labor (plowing, seeding, planting, harvesting, pruning), was not represented in genre paintings despite its prominence in the beginning of the seventeenth century. Although the portrayal of professions and trades remains mostly limited to series of prints or book-illustrations, few professions, such as the doctor, the dentist, the cobbler, the shopkeeper and the blacksmith, found its way to genre paintings on canvas or panel. 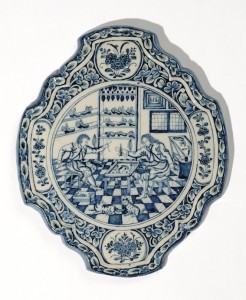 A cobbler’s shop is depicted on this blue and white plaque, made around 1760 in the city of Rotterdam (probably Schiedamschedijk). The plaque shows two cobblers seated at their bench and sewing shoes. At their feet is a recumbent dog and a seated cat on the tiled floor. Shelves holding fashionable shoes and a table with tools decorate the background of the shop. The blue and white tile floor is painted in perspective, and was probably done to exhibit the artist’s skill. Similar marble floors were used in Dutch genre-interiors in the middle and third quarter of the seventeenth century. Notable to the craft are the straps along the cobblers’ legs, with which they attach the shoes firmly to their knee to facilitate their work. Although the print source for this plaque is unknown, there are similarities with images from several print series of artisans. The left figure in the plaque resembles the posture of the left cobbler in a woodcut by Jost Amman (1539–1591) illustrating the Ständebuch (Eygentliche Beschreibung Aller Stande auff Erden) [Exact Description of All Ranks on Earth] of Hans Sachs (1494- 576), published in 1568 in Frankfurt. Between the two figures in the foreground of this print is also a table with tools, and beneath the ceiling is a wooden rod with shoes hanging on pegs. The right figure on the plaque resembles the shoemaker in the sketch by Jan Luyken (1649-1712), which he made for Het Menselyk Bedryf (The Book of Trades) of 1694. 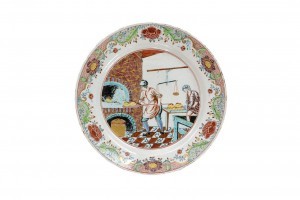 Another typical profession was that of the baker. This petit feu and gilded plate, which was made in Delft around 1740, depicts a typical bakery scene. The baker is transferring loaves of bread from a table beneath a gilt scale to his stone and brick oven while his assistant tramples ingredients on a table to the right. The scene is painted after the drawing of the ‘Backer’ (‘Baker’) by Leonaert Bramer (1596-1674) from his ‘Straatwerken’ (‘Street Works’) series of circa 1650-55, comprising 66 drawings illustrating a variety of peddlers and artisans. Leonaert Bramer was a successful painter and draughtsman, who after a period in Italy (1616-27), returned to the Netherlands and worked in his home town of Delft from 1628 onwards. One of the high points in his career was a commission in 1661 for the ceiling paintings of the new St. Luke’s Guild Hall in Delft. The majority of his drawings belong to illustrative sets based on the Old and New Testament, on classical literature such as Virgil’s Aeneid, Plutarch’s Life of Alexander the Great, Livy’s History of Rome, Ovid’s Metamorphoses, or on popular contemporary works such as Till Eulenspiegel or the Spanish novel Lazarillo de Tormes. The ‘Straatwerken’ series, however, is not based on a literary source, but “seems related to the artistic tradition of a book of trades,” of which the Ständebuch (Book of Trades) of 1568 with woodcuts by Jost Amman was one of the most influential. Some of Bramer’s drawings, including the ‘Baker,’ were directly inspired by a series of eighteen etchings of craftsmen dating to 1635 by Jan Gillisz. van Vliet (1600/10-1668). 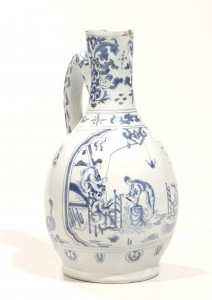 Genre scenes are mostly depicted on plates or plaques (the so-called ‘pottery paintings’), but sporadically these scenes are also found on other objects such as on this blue and white ewer. The ewer is marked LVD in blue for Lieve van Dalen, who was the owner of Het Jonge Moriaanshooft (The Young Moor’s Head) factory from 1695 to 1715. The front of the ewer illustrates a scene with four figures labouring in a chair-caning workshop. In Luyken’s Het Menselyk Bedryf (The Book of Trades) of 1694, there is a similar print of a workshop where chairs are being made, although it is not exact.

Although genre paintings often have a moralistic message, a deeper meaning behind the depiction of crafts and trade is not always apparent on Delftware. The message is more easily found in the print source, where many examples are paired with moralistic verses, as in Jan Luycken’s Het Menselijk Bedrijf. Perhaps Delftware painters purposefully discarded the moral aspect of their inspiration, and focused on the imagery of the profession, which was in high demand in the market.

[2] The particular cartouche shape of this plaque appears to be characteristic of plaques made in Rotterdam. Similar examples of Rotterdam plaques and a rectangular plaque painted in manganese with the same cobble depicted on the left side of the current plaque are illustrated in “Delfts uit de provincie” in Vormen uit vuur (1999) 168/1669, p. 74, pl. 113.

[5]  It is known that Delft painters drew their inspiration from prints by Jan Luyken, since a ‘petit feu’ plaque with a cobbler in the Lavino collection (Lavino, ill. p. 16, formerly Aronson Antiquairs collection) is heavily inspired by the print by Luycken.