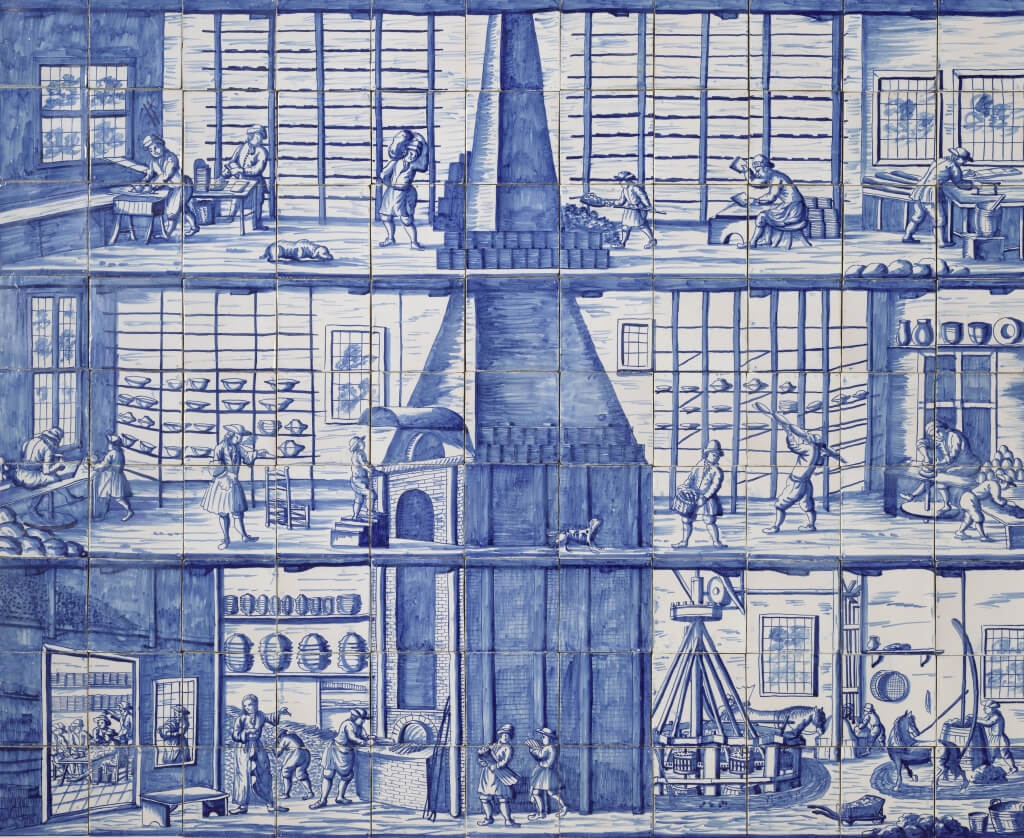 ‘Do not ingest, do not breath dust’ warns Ralph Mayer in The Artist’s Handbook of Materials and Techniques in the white lead section, and indeed, since 1994, the material has been banned from sale within the European Union except under special conditions.[1] Today many traditional potters use non-lead glazes, but in the seventeenth and eighteenth centuries there was no safe alternative that created the shine of porcelain. Lead is a toxic substance that causes poisoning after exposure to large amounts. The element was used until relatively recently in white paint pigments, as well as for the glazes in Dutch Delftware.

In the treatise called ‘De Plateelbakker of Delftsch Aardewerk Maaker’ (‘The Faience Potter or Maker of Delftware’), which was published in 1794, Gerrit Paape tells about the process of making ‘Hollandts Porceleyn’ (Dutch Porcelain) – as the new pottery was somewhat misleadingly called.[2] The traditional preparation of the mixture was to wash it, weather it and then knead it. After this preparation, the clay was divided up into balls, of which each was kneaded again and subsequently brought to the thrower. This craftsman-thrower usually shaped his pieces on the potter’s wheel, after which they were brought to the oven for their first (‘biscuit’) firing. Then, the glazer would dip it in a bath of ‘white’, a mixture that consisted of 50 pounds of tin ash (oxide), 56 pounds of mastic (a mixture of sand, salt and soda), a half pound of smalt (blue ground) and 5.5 ounces of copper fillings. After this bath the piece was held in a vertical position for a short time before it was put to dry on a plank covered with nails driven in half way. Once it was dry, the piece was decorated and the transparent lead glaze was applied. The application of this lead glaze was also known as ‘kwaarten’, which probably derived from the Italian word ‘coperta’.[3] This lead glaze gave the objects not only the shiny look of porcelain, but it also functioned as a protective layer for the object.[4] The recipe for this mixture reads as follows: 36 pounds of mastic, 42 pounds of litharge of gold (i.e. oxide of lead), 4 pounds of potash and 7 pounds of salt.[5]

According to Paape, the Delft potters bought the lead ash for the glaze at plumbers, or at plumbings, where there was enough available.[6] They probably then brought it to a white lead mill, a special mill from which the miller would extract white lead.[7] Often these mills were located next to water in order to easily facilitate the loading and unloading of materials. The production of the white lead took place in the buildings next to the mills. Although white lead comes in natural form as the mineral hydrate Cerussite, there is little evidence that this mineral was used as a pigment. The process of producing white lead is relatively simple, probably easier than obtaining the natural material, and has been known since ancient times.[8] A white lead pigment could be made by lead plates exposing several weeks in a warm place to the vapor of vinegar (which contains acetic acid). In wooden tanks, lead (and also tin for the tin glaze) was brought to oxidize by hanging strips of lead in earthenware pots over vinegar (which contains acetic acid). Afterwards, it was put in bins with straw and horse fertilizer, which became hot. Slowly, the mixture oxidized and after five to eight weeks the resulting white lead could be collected as a powder. This white lead, together with soda, was ground to powder in the mill.

The process to make white lead was relatively easy and required no particular skill of the craftsman. This meant that, in principle, every painter or potter was able to make their own white lead from acetic acid and lead. This changed with the rise of the so-called ‘Dutch Process’ of the white lead industry, which industrialized the division of labor. Factories had six divisions and usually provided work for a dozen workers. In the casting chamber, the lead plates were poured, which then were brought to the shed where the actual scalding process took place. This was a place with a number of identical square wooden pens of approximately four by four meters, each of which could be easily closed and opened on one side. When the factory was in full operation, all the pens would be in production (scalding) except one. The remaining empty pen was then properly filled or emptied. On the bottom of a pen, a layer of horse manure and/or straw was applied to many tens of centimeters thick. On this layer a hundred scalding pots were placed closed together. These scalding pots were filled with acetic acid from beer, after which the lead coils were placed in an upright position. Then, the lead cover plates were placed on the pots with a layer of wooden slats on top of it. On these slats a second layer of manure was paired with a second layer of pots. A total of four to six (in the nineteenth century there were even more layers) were arranged so that the whole lot contained about 3600 breeding pots. The top layer existed of a hefty layer of horse manure and straw, which caused the temperature to gradually rise and changed the lead into white lead after four to six weeks. The top layer of manure was then removed and after the white lead was allowed to cool overnight, followed the transportation of the affected rollers and cover plates to the knock bench.

The next step was to transport the lead to the knock bench, which was a large table with a stone top, on which the workers parted the white lead of the remaining lead with hammers. This caused a large amount of white lead dust in the air, making the beating an extremely unhealthy activity. The workers protected themselves by placing a wet cloth over their mouth and nose and regularly rotating their work. Lead poisoning was very common, and almost all descriptions of the white lead industry mention the dangers for the workers. 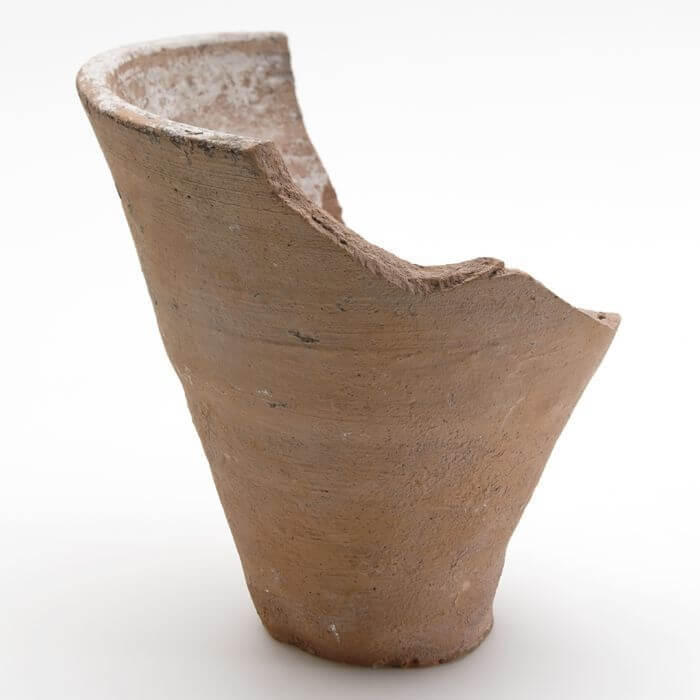 The collected white lead was crushed and sieved, and subsequently mixed in large wooden vats with water to form a thick porridge. This mixture was put on a wet mill in order to be crushed. Crunched chalk was usually added, which made the end product not better but much cheaper (the addition of this raw material formed an integral part of the production method of the ‘normal’ Dutch white lead). Next, the mixture was milled on a coarse grinder and then on a finer one. Subsequently, the further purification and processing of the extracted white lead took place in a number of drying greenhouses. In these long narrow barns the mixture, scooped in pots that resembled modern flowerpots, was put to dry on wooden racks. When the white lead in the pots was sufficiently dry (usually after five to six weeks), the pots were reversed and removed. This was followed by the subsequent drying of these white lead ‘breads’ (loodwitbroden), until they were fully dry over a number of weeks.[9] Finally, the process ended with the packing department.[10]

After the lead white was collected, the potter could make the mixture for the Kwaart. The mixture was then placed in a tub, which opened at the bottom into a washtub. A worker sat in front of the washtub with a short, stiff hair brush that he dipped in the mixture. He sprinkled and brushed the glaze on the earthenware objects, which gained a snow white color (if the kwaart had indeed a snow white color). After the process of ‘kwaarten’ the objects were placed in saggars to be fired once more in the oven.[11] The inside of the saggar had to be saturated with undiluted lead glaze, and carefully sealed with clay so as to ensure that the component of the glaze which gives the shine could not evaporate during firing nor be absorbed by the saggar.[12] The glaze – which contains lead to facilitate the melting of glaze particles – fuses to the pottery when it is fired in a kiln. When the pottery is fired at the proper temperature for the proper amount of time, essentially all the lead is bound into the glaze. Once this glaze was sprinkled on and brushed, it had the brilliant sheen to emulate the gloss of porcelain.[13]

[7] They not only had delivery contacts with the millers, but the Delft potters often partly owned the mill.

[8] M. Albrecht, Klein maar fijn. Loodwit in fijne deeltjesgrootte, 2012, p.9. Pliny included white lead in his Natural History. He said it was poisonous if swallowed, although he did not comment about the dismal effects of absorbing it through the skin, or of breathing in the dust while grinding it. V. Finlay, Colour, London, 2002, pp.120-121.

[9] Usually the Dutch white lead came onto the market shaped in the form of such loaves of bread. Sometimes the white lead powder was traded loose, packed in drums. In this case, the dried white lead breads were pulverised and the sieved and sent.