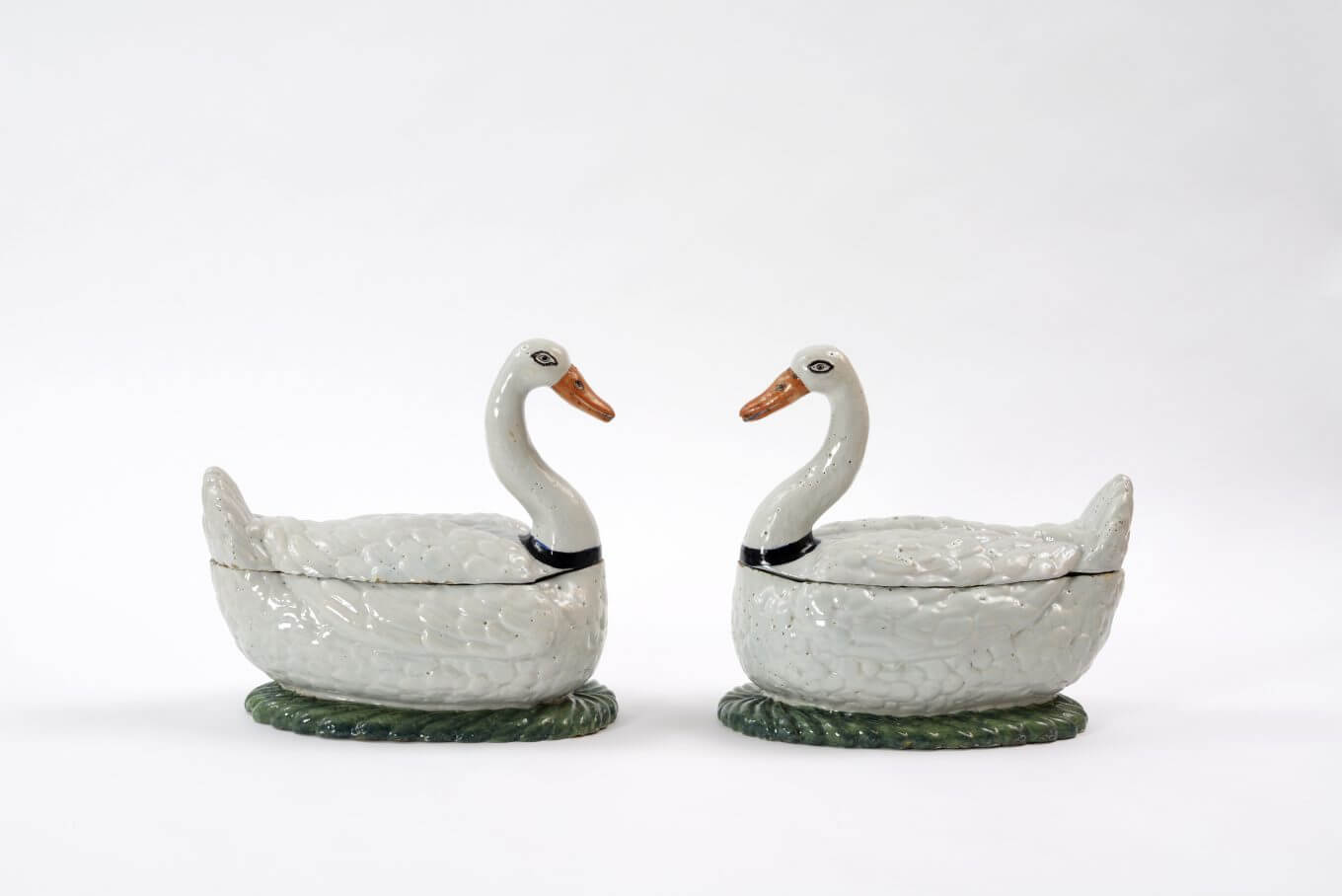 Over the centuries and throughout the arts the swan has symbolized beauty, elegance and perfection. Celebrating the popularity and the status of the noble swan, it is no surprise that historically the majestic bird often was chosen to decorate the table during a dinner party given by a prosperous family. As the hunt for this game bird was restricted to wealthy landowners and the nobility, the protected swan became a culinary status symbol.

Poultry was a common game hunted in the Netherlands. It was often featured as the main ingredient of many meat recipes, especially rooster and capon. Swan, heron, partridge, pheasant, dove, duck and goose were also mentioned in recipes, as well as peacock and snipe.[1] In the eighteenth century, the consumption of large waterfowls, such as swans, herons and bitterns, became largely obsolete due to the legislative restrictions of hunting.[2] Therefore, the consumption of these birds was considered elitist, despite their poor digestibility. The noble swan was especially regarded, and was reserved for the nobility, or the lord of the castle and his guests. 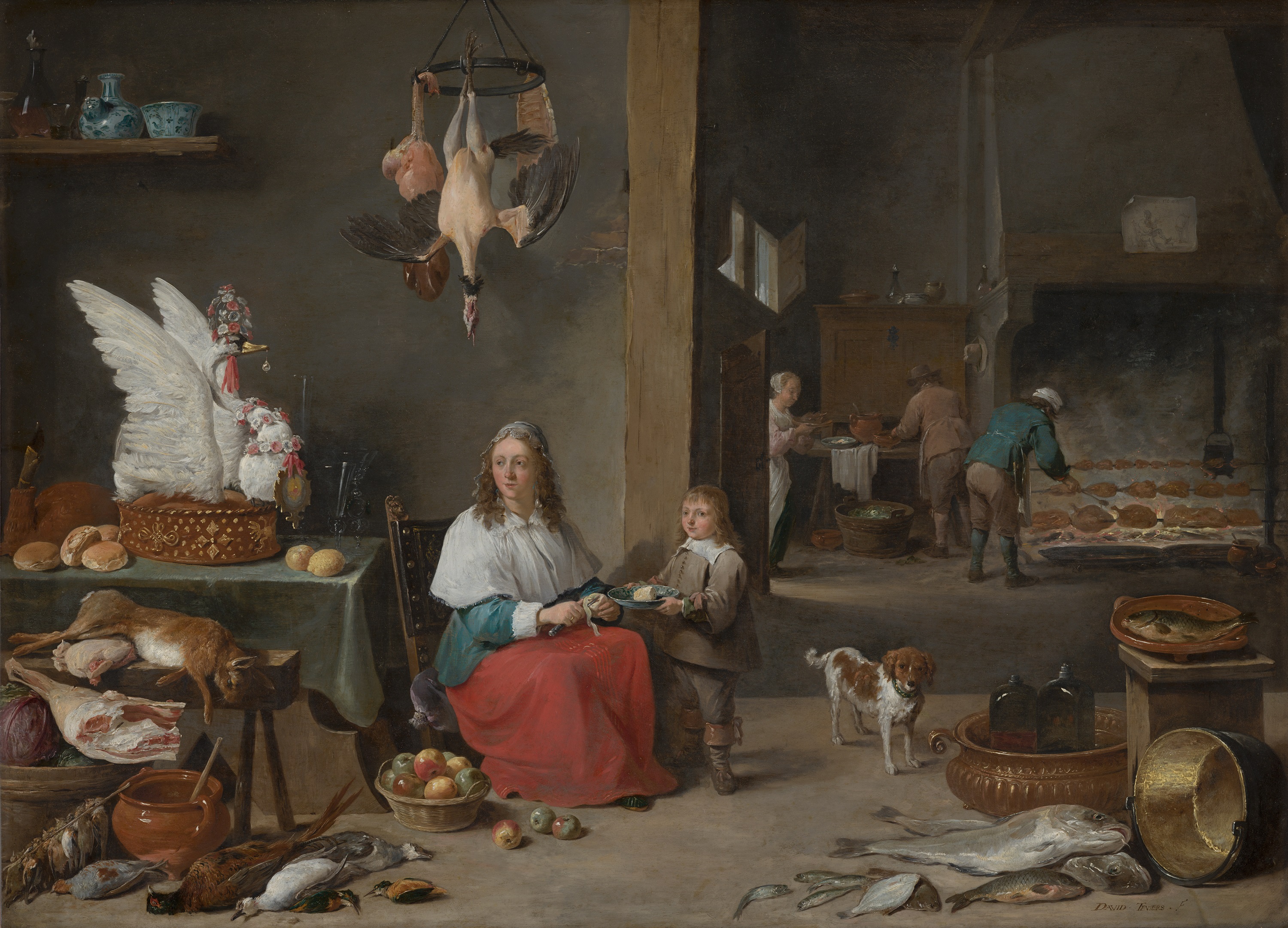 As early as the late medieval period, a savory pie in the shape of the king of the waterfowl formed the showpiece of the grandest dinner tables. The beautifully elegant birds were carefully skinned, roasted and then wrapped and served in their original plumage. Often, the swan was festively served with fireworks in its beak and various decorations on its head as can be seen in Kitchen Interior, painted by David Teniers the Younger in 1644. The swan pie was also a traditional and festive dish that often appeared on the table of a grand feast. The venezoen, or roast meat was baked inside a pastry crust that was decorated with great skill.

Although from being the highlight of a meal, the taste for these great birds changed over time, and they eventually disappeared from the menu. Chicken and other poultry replaced the swan in savory meat pies, as they were a more palatable alternative to the tough meat of swan and peacock.[3] At the time when dining à la Française swept through Holland, these large Delftware swan tureens were a perfect, delicate substitute for the large bird pies. The tureens are marked GVS for Geertruij Verstelle, the owner of Het Oude Moriaenshooft (The Old Moor’s Head) factory in Delft from 1761 to 1769. For eight years Verstelle was responsible for creating objects of exceptional originality and ingenuity.  Many elegant, and carefully executed pieces in the rococo style were produced under Verstelle’s ownership.

This naturalistic pair of swan tureens, dated to 1765, are stylistically linked to the rococo period, an aesthetic characterized by the use of ‘C’- and ’S’-shaped scrolls, asymmetrical motifs, and naturalistic decoration depicting animals and fruits.[4] By the middle of the eighteenth century, the fashion for trompe l’oeil ceramics had spread through Europe. Trompe l’oeil, or deceive the eye, was a technique used in both modeling and painting to captivate and fool the viewer. The porcelain menagerie of Augustus II ‘the Strong’ (1670 – 1733), Elector of Saxony and King of Poland, was an important source for zoomorphic ceramics. Under his patronage, hundreds of large scale sculptures of exotic, domestic and fantastical animals were created between 1731 and 1736 at Meissen (Saxony), the first European factory that produced hard-paste porcelain.

The Delftware industry was modeled after the successful production of faience in Strasbourg, France, and porcelain in Meissen, Germany and Chelsea, England. During the Seven Year’s War, the importation of France and German luxury wares declined, and Delft potters were able to compete in the ceramic tablewares market. Also significant in the rise of Delftware were the changes in European table culture around 1760.[5] The city’s potteries quickly accommodated the new taste of the nobility and the wealthy bourgeoisie for adorning their tables with brightly colored fruits and vegetables, and zoomorphic objects in the form of domestic and exotic animals and birds. 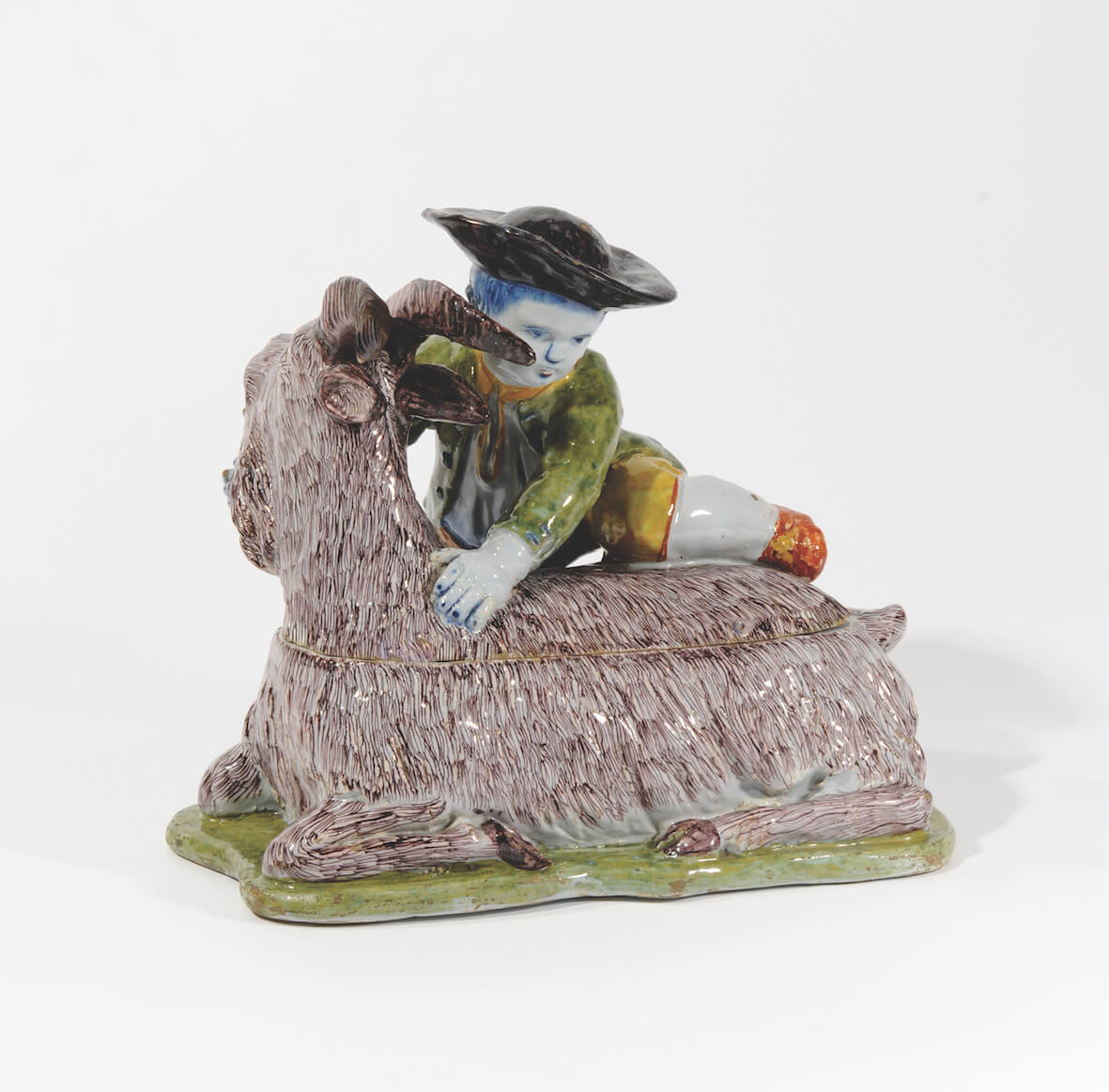 Delftware tureens are distinct from other centers of production in their shapes and painted decoration. Large tureens modeled after animals were rarely made by Delft potters. Besides the swan tureens, the few other large tureens which are known are modeled in the shape of a goat accompanied by a boy as is illustrated in Aronson 2010, pp. 132-135, no. 78; a recumbent sheep of which an example can be found in the collection of Museum Prinsenhof /Lambert van Meerten, Delft (inv.no. LM 2140ab); or a pike of which the Musées Royaux d’Art et d’Histoire in Brussels (inv. no. 724) has an example. This scarce manufacture contrasts with the production of Strasbourg, where large zoomorphic tureens were more common. Another difference is the color of the Delft examples. The Delftware tureens were often produced in the grand feu polychrome colors, whereas Strasbourg tureens were usually painted with the petit feu colors.

This pair of large swan tureens is a remarkable and rare example produced by a Delft pottery. This design, with cover and base imitating the whole animal, is more in line with the life-size zoomorphic tureens that were produced in Strasbourg faience factories. It was highly unusual for the potteries in the city of Delft to produce tureens of such dimensions. The Delft potters were familiar with these life-size German examples, as well as the porcelain menagerie of Augustus II ‘the Strong,’ which consisted of large-scale white sculptures.[6]

Undeniably, the swan tureens that were produced under Verstelle’s ownership are among the most remarkable objects in regards to size, design, and technical skill that were made during her tenure. Baking such magnificent and big pieces without any cracks was a real achievement. Even a small mistake in the production process of this pair of tureens would have irrevocably damaged the final result. These remarkable swans prove Geertruij Verstelle’s ability to combine exceptional technical skills with excellent management skills.

[6] The creation of this incredible menagerie may have caused a huge spectacle in the eighteenth century , but moreover the potters from different regions were in contact with each other. It is suggested that already in 1701 Count Walter van Tschirnhaus visited Delft, and especially the potter Ary de Milde, which may have contributed to the development with Johann Friedrich Böttger of the red stonewares first produced in 1708 at Meissen. K. Duysters, Theepotten steengoed, Roodstenen theepotten uit Yixing en Europa, Arnhem (Historisch Museum het Burgerweeshuis), 1998, pp. 36-38.