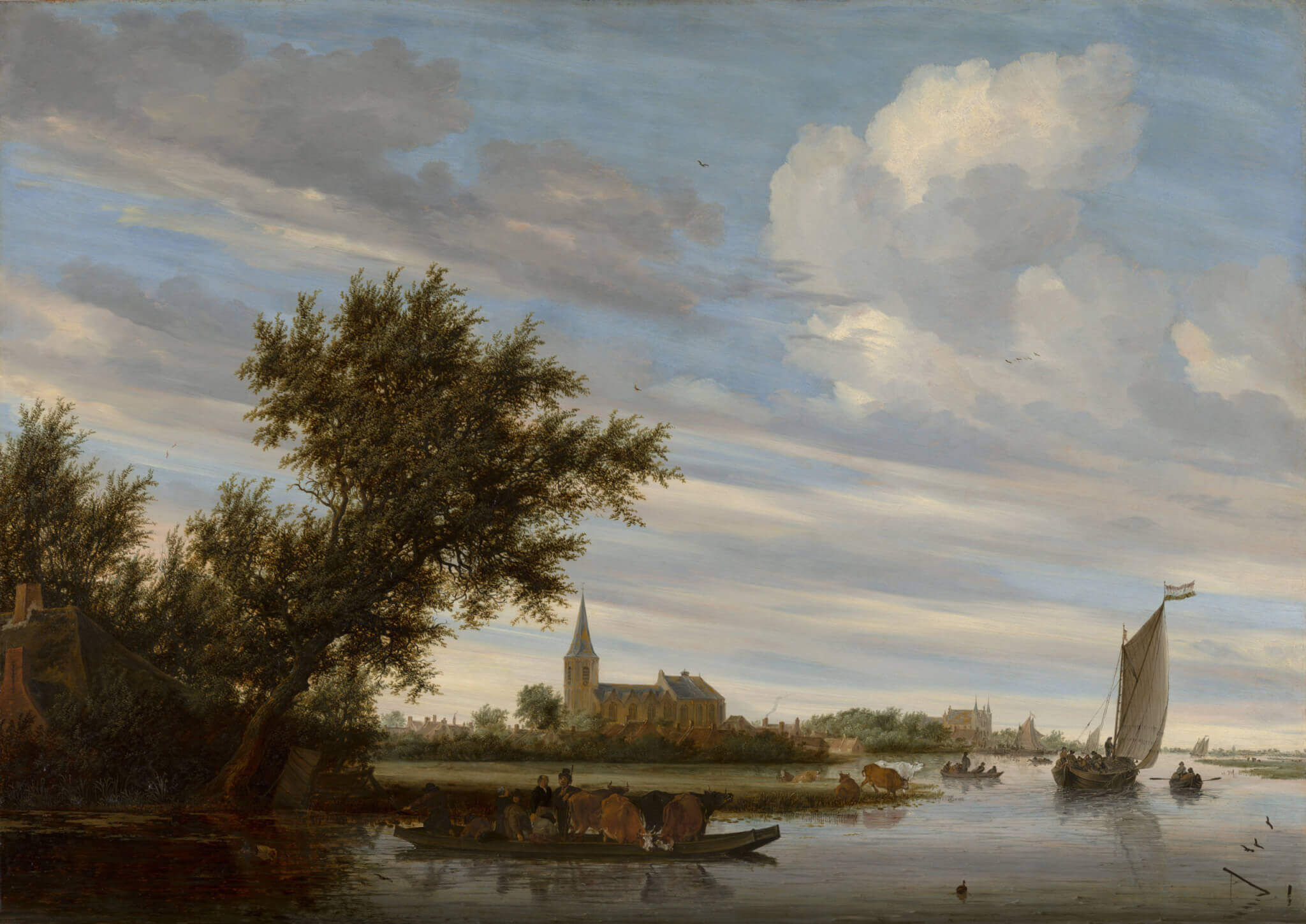 The abundance of waterways in the Netherlands have served as a thriving transportation system for centuries. These waterways were the most important links between the various merchant cities in the seventeenth and eighteenth centuries. Transport and storage companies were established along the quays, from where the ships set course for other cities.1 When Delft brewers ceased production at the beginning of the seventeenth century, pottery makers quickly occupied their large abandoned buildings on the canals. Both the large spaces and the location along the canals were convenient for the Delftware factories; the water source was beneficial for the working of their clays and for the transportation of their raw materials and finished wares.

There were different types of ships that specialized in various transports along the Dutch waterways. For freight transport, many cities had turn-over connections with sailing ships that also offered cheap transport to passengers. Besides the regular cargo ships, there were specialized cargo ships for market goods, grain and even earthenware.2 However, the most frequently used means of transport was the tow barge, ideal for moving people and limited quantities of goods, such as small packages and mail. This means of transport was faster and more efficient than the special cargo ships. The tow barges were pulled by horses and followed their sailing route in almost any weather condition.3 Moreover, due to the economic rivalry between the cities, freighters were not always allowed to use the extensive network of tow barges. They had to reach their destination on open water such as the Zuiderzee, the IJ or the Haarlemmermeer.

The Delft pottery industry mainly found its market outside of Delft, in cities such as Gouda, Rotterdam and Amsterdam, but also to Hamburg, Bremen and Ghent.4 Delftware was regularly shipped to these cities as merchants and retailers placed their orders directly with the Delft factories. Every week, ships would travel between Delft, Amsterdam, Rotterdam and Gouda to collect and transport the earthenware goods.5 However, orders placed directly by the merchants did not always run smoothly: in September 1765, master potter Jan Jonas van der Burgh of De Vier Romeynse Helden (The Four Roman Heroes) factory received a letter from the Rotterdam traders Daniël and Joseph de la Pinje who complained that they had placed a number of orders with Van der Burgh in July, but that the delivery had not yet taken place. As a result the Rotterdam traders had suffered considerable damage, because the Delftware had already been resold to the Canary Islands and that the ships that would transport the goods were, at their expense, already waiting for two months in the port.6

The Delftware objects were packed in crates or baskets, and covered with hay or waste before they were placed in the ships. Although securely packed according to seventeenth and eighteenth century standards, earthenware was occasionally damaged during transport. According to many archival documents, the Delftware potter and merchant often engaged in liability disagreements after damage was incurred. Of course, the potters tried to cover themselves as much as possible against possible damage; on several occasions, a considerable number of potters declared that their products were packed securely. These statements may have been accepted as proof of innocence. In some cases, mutual agreements were made between potters and captains.7

Damage was not the only problem that arose in the transportation over water. As mentioned before, the Delft potters also received their raw materials for the production of their goods by ship. The Ghent ships regularly traveled to Delft, bringing soil, a main ingredient of the clay mixture, from Tournai. On its return to Ghent, the ship took the city’s ashes and garbage back, but it was also customary for Delft potters to give small batches of Delftware to the Ghent skipper for further trade. The Delftware objects were loosely placed in the waste on the way back, which reduced the chance of damage and lowered the cost for the factory owners. But this did not satisfy everyone, since they partly took over the work of the Dutch skippers. As a result, the Ghent skippers were banned in 1751. Because the Delft potteries were dependent on these Flemish skippers for the supply of earth and partly of their export, the states of Holland made an exception for the transport of waste and the supply of earth for the pottery industry in Delft.8

The question of who was allowed to carry out these lucrative transports of Delftware from the city of Delft to other cities was a problem that arose many times in the seventeenth and eighteenth centuries. At the end of the seventeenth century, there were several complaints from the Delft potters about the trade and transport to Amsterdam. The skippers of the Amsterdam ‘klein-schippersgilde’ (‘small-skippers’ guild’) usually transported Delftware from the factories to Amsterdam. The problems mainly related to the so-called ‘gebroken’ (“broken”) cargo skippers from Amsterdam, skippers who transported cargo from different potteries. Sometimes it happened that the Amsterdam skippers were either not available, had no more space in their ships for extra objects, or had just left with a different load. As a result of these complaints, a provision was made in 1688 for the transport of earthenware between Delft and Amsterdam. A Delft skipper was appointed to have the right to transport various loads from the Delftware factories to Amsterdam if such problems would arise.

This Delft skipper had a small boat that turned out to be extremely suitable for transporting these loose batches of pottery. In addition, he was faster and easier to call than the skippers of the large cargo batches. Gradually, this Delft skipper was preferred by both the Delft potters as the Amsterdam merchant and was therefore regularly asked to transport the Delftware goods.9 For example, in October 1760, the Amsterdam merchant Johannes Bijnima asked Pieter van Marum, the owner of De Romeyn (The Roman) factory to only send the Delftware objects with the earthenware skipper.10

In the middle of the eighteenth century these problems arose again. The archives show that in 1760 the Delft potters had several complaints against the skippers. Previously, ships made a tour of the various potteries to find out whether goods still needed to be loaded, but suddenly the potters now had to determine when a skipper planned to leave as long as there was still room for their merchandise. In addition, the skippers often refused to deliver pottery to remote places. But complaints also go the other way: Amsterdam skippers who saw cargoes pass by, as the Delft earthenware skipper had already done this.

Despite the problems that occasionally arose, the foregoing demonstrates the importance of the Dutch waterways for the transport of Delftware. In the seventeenth and eighteenth centuries, the canals and rivers in particular provided a connection between the major cities and thus an expansion of the Delftware market.