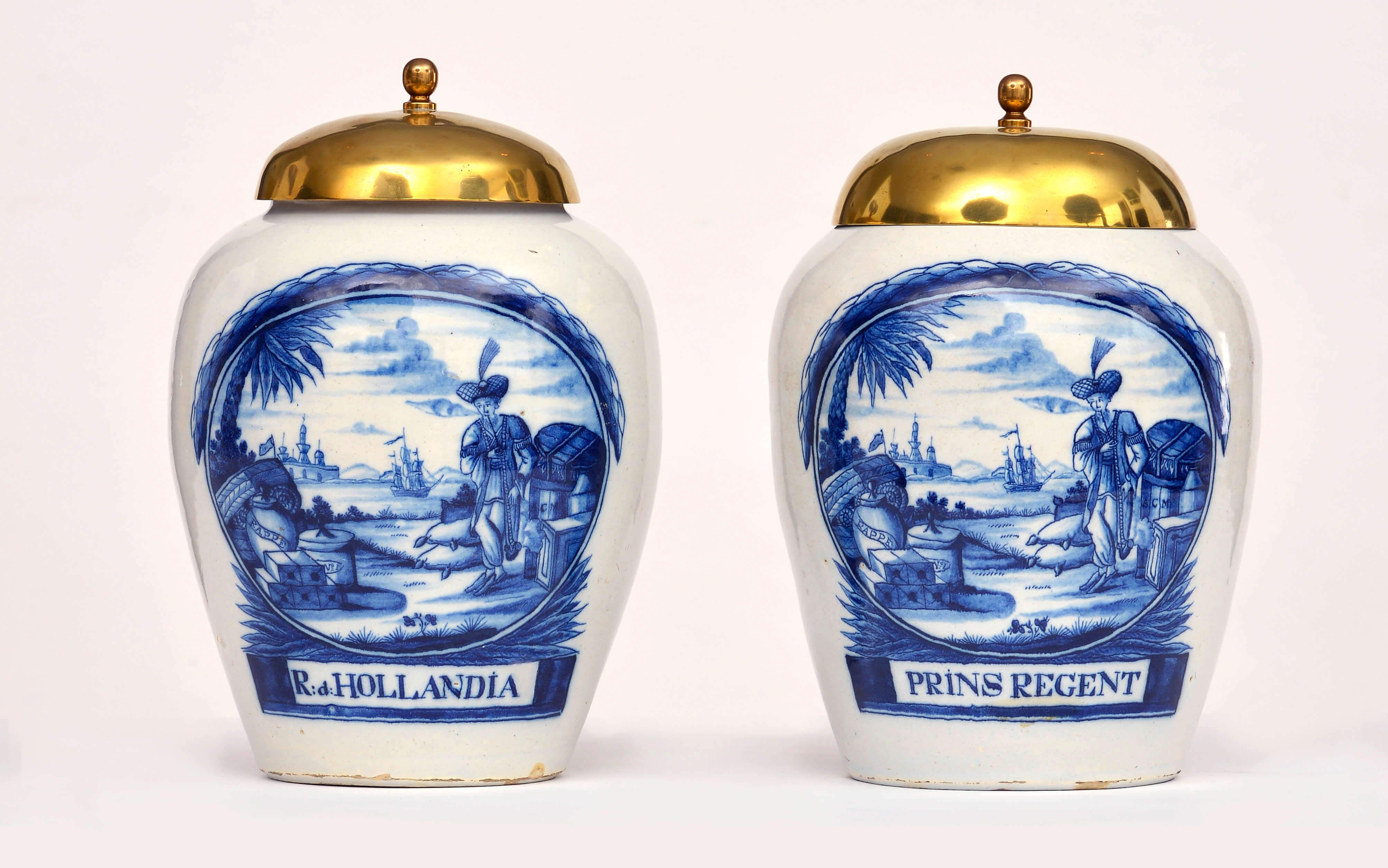 The many ships in the harbour of Amsterdam during the five-yearly nautical event ‘Sail’ remind of old times, when ships from all over the world arrived in the Netherlands, loaded with exotic treasures. Thanks to the VOC and WIC the Dutch came into contact with all kinds of exotic products, such as spices, sugar and especially tobacco.

In 1602 the Verenigde Oost-Indische Compagnie (East India Company, in short VOC) was founded. Although it was founded as a commercial corporation, the organisation was given permission to operate with a military force under the Dutch flag. With canons and armed soldiers, the merchants took over the well established Portuguese and Spanish settlements and by doing so, the trading routes. Being at war with Spain from 1568, and for eighty years onward, this was in the interests of the Dutch Republic. Ships filled with exotic goods, such as tea, coffee, Chinese porcelain, fabrics as chintz and silk and most of all spices, caused great excitement in the Netherlands, and the cargoes were sold at auction for great profits.

With the huge profits of the VOC in mind, the West Indische Compagnie (West India Company, in short WIC) was founded to sail to the west. To make sure that the two companies did not become direct competitors in the same parts of the world, the WIC sailed to the west coast of Africa (where they covered the south of the Tropic of Cancer), and across the Atlantic Ocean to America. However, the Spaniards and Portuguese had already a monopoly on the trade in America, especially in South America. When in 1621 the WIC was founded, the company had an important role in the war with Spain: the ships had the explicit task to harm the enemy by capturing the Spanish ships, preferably those returning from South America and loaded with gold and silver. This would shift the Spanish attention to the sea, instead of the mainland of the Republic.

Despite this piracy, the main reason to sail to the west was – not surprisingly since it was a Dutch enterprise – the trade. Amongst the products, coveted by the WIC, were silver, sugar, salt and tobacco. Despite these so sought-after products, the most profitable ‘commodity’ was collected from the west of Africa, the slaves. However horrible and tragic, the slave trade in fact made the WIC viable. Surinam and Brazil had the perfect climate to grow the indigenous tobacco plant, but had too few local inhabitants to work on the plantations. Moreover, the states of North Carolina, Virginia and Maryland were in need of manpower. The WIC brought many slaves to the ports of Surinam, Benice, Essequibo and St. Maarten, from where slave traders  took them further to the plantations and their owners. Sugar plantations could get discounts when one third of the bill was paid in sugar, which could be easily sold back in the Netherlands.

Not only sugar was eagerly purchased in the Netherlands, but also other interesting plants and products were brought back to the homeland, such as potatoes, tomatoes, peppers, corn and tobacco. Tobacco, for instance, was used by the Mayans in religious rites and the Spaniards were the first to bring these brown leaves (and the knowledge of how to smoke it) to Europe. England had taken control over large tobacco plantations in the southern states at the east coast of America, and provided Europe with the materials for this new and fashionable custom. In 1700 half of the total import of 20,000,000 pounds into the United Kingdom was exported again to Amsterdam, where a large tobacco industry flourished. 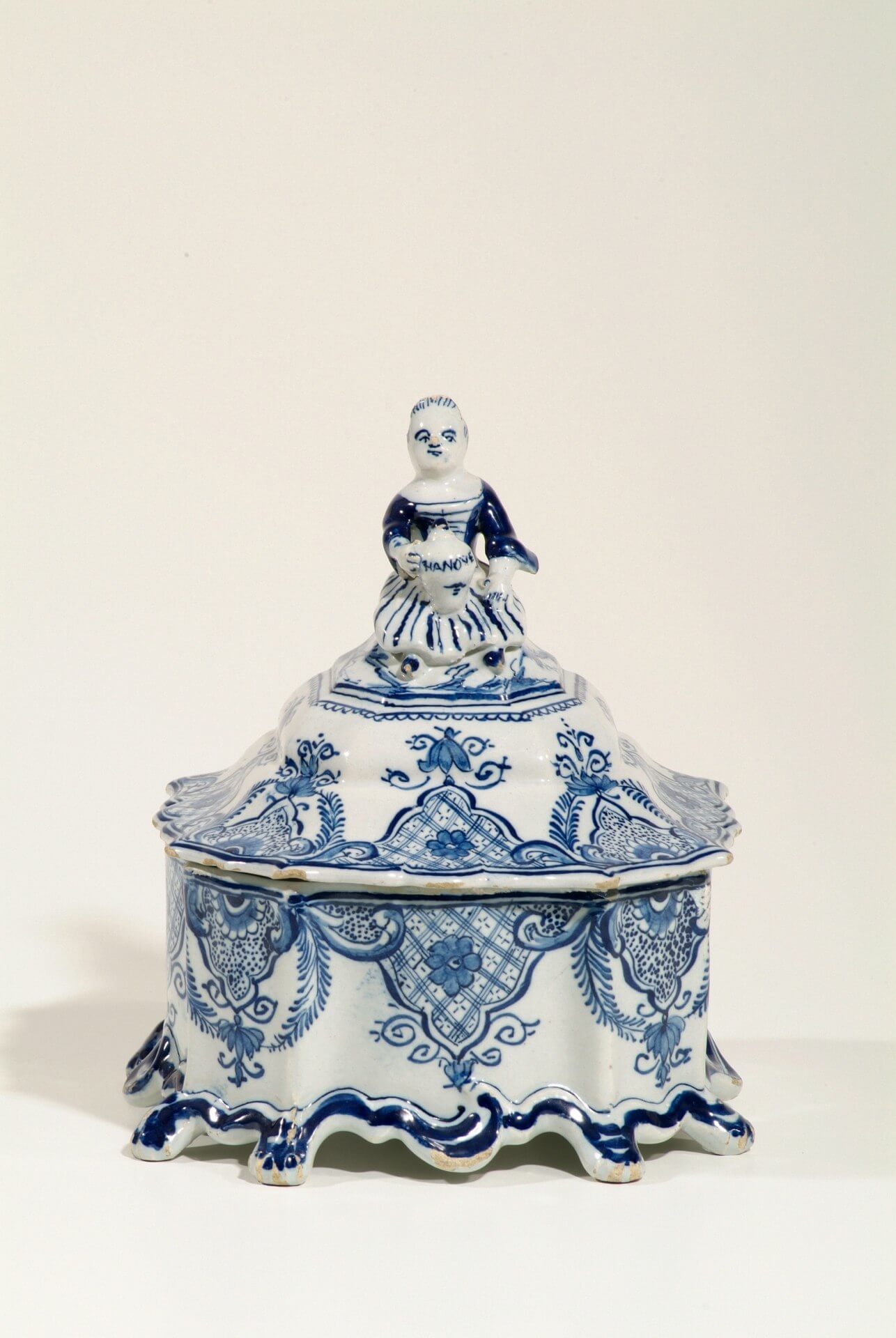 Tobacco leaves, already cured, fermented and dried at the place of production, arrived in the European countries in the shape of large rolls. Once it reached its final destination, the tobacco was cut to smoke or chew, or scraped to sniff. Once at home, the buyer could store the tobacco in specially designed jars, often made of Dutch delftware. Smaller quantities could be stored in delicately decorated tobacco boxes, which could be used on a desktop or table. A fine example is a box, marked VD for Johannes van Duijn, currently in the collection, topped with a small female figure holding a tobacco jar with the inscription “Hanover”. The inscription refers to both the port where the wares arrived and the name of the tobacco. Often the tobacco jars were decorated with cartouches bearing the name of the type of tobacco, such as Rappé after the french tabac rappé for the finely rasped or scraped tobacco, thus forming a strong and moist snuff. Sometimes also the place of origin of a certain type of tobacco was noted on the jars, for example Marteniek or Cuba indicating respectively the islands Martinique and Cuba.

In the collection is also a pair of tobacco jars with large cartouches showing a exotically
dressed man wearing a turban. The figure holds a long stemmed pipe in his mouth, and is surrounded by all sorts of crates, boxes, barrels and bags. In the background a ship just set sail. The cartouches include the words “R:d:Hollandia” and “Prins Regent”. The Hollandia was a famous seventeenth century flagship of the admiralty of Amsterdam, at sail from 1665 and 1683. Michiel de Ruyter and Cornelis Tromp were well known heroes in charge of this 80-canon ship, famous for their actions in many sea battles against the English. Another ship named ‘Hollandia’ was less lucky, since it sunk near Annet (one of the Scilly Islands) on its maiden voyage in 1743. In 1971 its wreckage, along with a large quantity of silver coins, bronze cannons and mortars, was found by a diver, and the collection of the Rijksmuseum in Amsterdam holds many of its articles of every day use. “Prins Regent”, on the other hand is not the name of a ship, but is up to modern day one of the best snuffs available, flavoured with a particular Dutch cognac and with hints of bergamot and lemon.