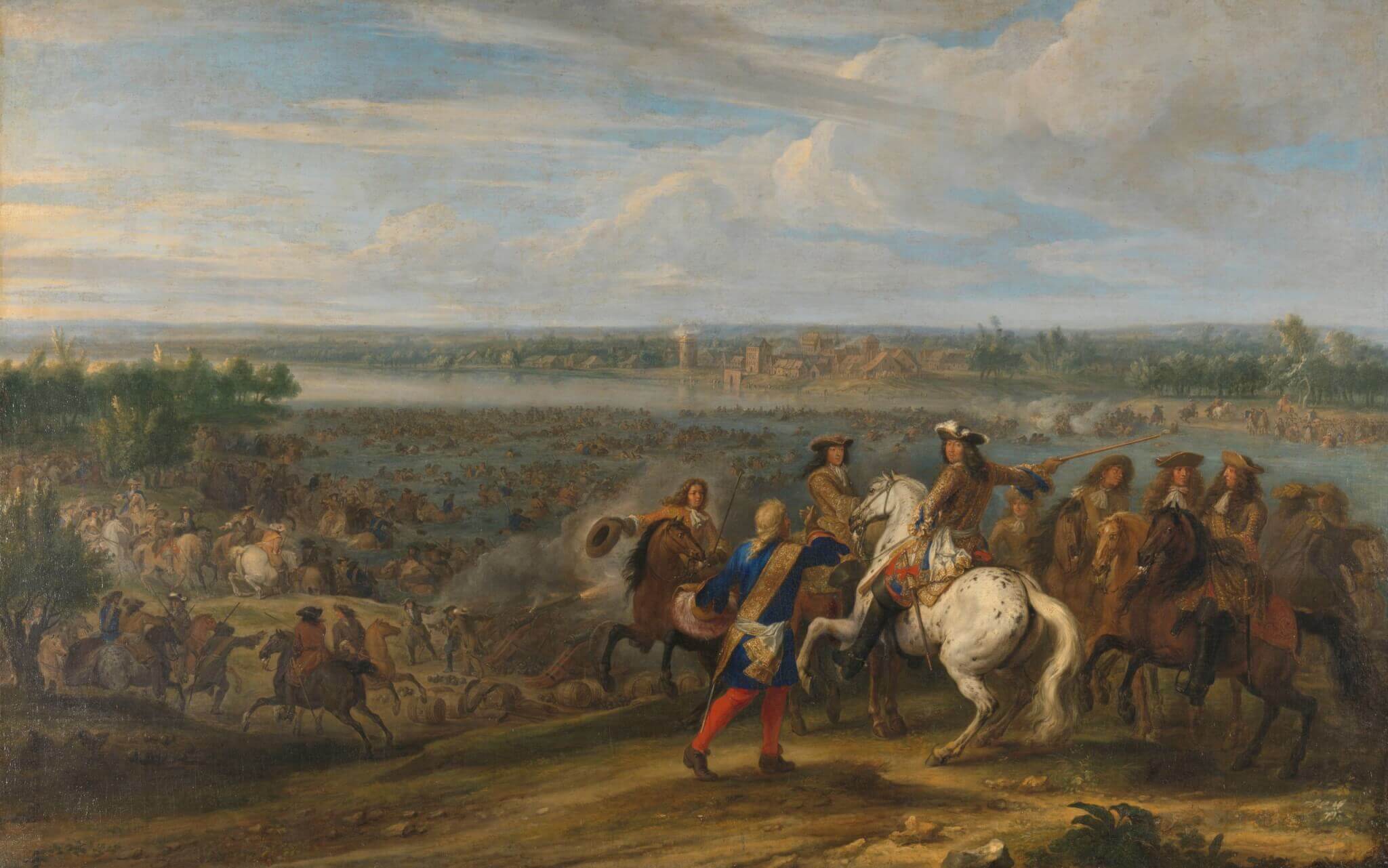 “Het volk redeloos, de regering radeloos en het land reddeloos” (The people were irrational; the government desperate and the country irretrievable), no this is not a recent quote, it is a phrase that was coined to describe the state of Holland in 1672. In Dutch history, the year 1672 has from that time to present been known as “Het Rampjaar” (The Disaster Year). So many catastrophes and calamities befell the Dutch Republic in that year, that to the Dutch of that day and later, the whole year merited the description “Disaster.” It almost meant the end of the Republic.

Prior to 1672, the tiny nation had seemed to be enjoying a charmed and fortunate existence: After decades of struggle, the United Provinces of The Netherlands had finally achieved independence from Spanish rule and in 1648 had secured international recognition as a nation. Unusually, in an age of emperors and kings and princes, the United Provinces formed a republic to govern themselves; this proved a brilliant boon to the nation.

The governments of monarchs were notoriously bad risks for money lenders, for if a king died in debt, his debts passed with him. A republic, well, that was another thing all together. Like a corporation a republic is intended to be immortal.  This stability also means that a republic cannot simply shed its debts by the death of a leader. So the Dutch Republic quickly became known as a uniquely good risk for money-lending.  Basically, the Dutch Republic had a really high credit score, and the result was that it could borrow money far more cheaply than the great kingdoms around it.

The wealth of the Republic, through the VOC trade and Baltic Sea trade, fostered a hostile attitude from England, France and some German dioceses. The Netherlands was actually surrounded by countries that were stronger, but less wealthy. When the Disaster Year started, the Republic had a strong navy, but the army was not much.

Ground Wars and Naval Battles
The Disaster Year started with a military incident in the Channel on March 23, 1672. Despite a military alliance with England from 1668 – concluded against France – on that day the British stopped a squadron, the Smyrna fleet, of 70 Dutch ships and fired at the fleet. This incident heralded the Third Anglo-Dutch War (1672-1674). It was the beginning of the Disaster Year. The relationship between England and the Republic had been tense since 1651, because of the English Navigation Act. With this Act the British tried to frustrate the Dutch sea trade.

There were also issues with France, the country of the mighty Sun King Louis XIV. Louis had boundless territorial ambitions. The reason for the war with France was in 1667, when Louis XIV marched into the Southern Netherlands with his armies, but Johan de Witt made an alliance with England and Sweden: the Triple Alliance. Louis had to embarrass the withdrawal in 1668 with the Peace of Aachen, but vowed revenge. Louis made an alliance with the dioceses of Cologne and Münster to carry out that revenge.

In 1672, with the army of England, France and the dioceses of Cologne and Münster, the largest army stood on the Dutch borders since the time of the Romans. The French soon defeated the weak army of the Republic. Louis occupied a lot of territory in the Eastern part of the country. Pillaging and murderous, the French troops, after having occupied the city of Utrecht on 23 June 1672, advanced towards Amsterdam. The Dutch Water line – a series of water-based defences conceived in the early 17th century – seemed to offer a solution, but on December 27 and 28, 1672, the French army managed to partially cross the ice with troops. The troops of Münster and Cologne attacked the northern part of the Republic in August 1672 and several cities were occupied by the enemy troops. Cities were pillaged, immense stores of goods were looted or burned in merchants’ warehouses, people were forced to refugee to safety, and civil disorder completely disrupted normal trade and commerce.

The war with England took place at sea. With the secret Treaty of Dover from 1670, the English and French King had agreed to destroy the Republic. Four important naval battles were won by the Republic’s Michiel de Ruyter against the Anglo-French fleet and the British and French were prevented from landing in the Republic from the sea and thus blocking the Dutch ports.

Turning Point
In September 1673 the tide turned for the Republic. Then Prince William conquered the fortified city of Naarden. William’s troops, along with some other German troops, also captured the city of Bonn. This disrupted the supply line between the armies of Münster/Cologne and the French army and forced the French to evacuate the Netherlands. France gradually lost allies, such as England, which ended the war with the Republic in the spring of 1674.

The Disaster Year 1672 had major consequences for the Republic. The battle, which lasted approximately seventeen months in total, led to the closure of banks, shops, courts, schools and theaters. Many traders, artists and painters also went bankrupt due to the war crisis. The inundations around Amsterdam further halted the sale of building plots.

Politically, 1672 was also a turning point. In the Disaster Year, tensions which had strained the Republic’s politics for generations, the conflicting desires of some to retain their Republic, and the aims of others to install a proper royal monarch, exploded. In the hysteria of the disasters William III of Orange, a contender for the Dutch premiership, overthrew Prime Minister Johan de Witt and tossed his brother, Cornelis de Witt, into prison in The Hague as a traitor. When Johan went to visit Cornelis on August 20, an enraged mob stormed the prison, murdered their former prime minister and his brother. De Witt brothers were held responsible for the greatest war the Netherlands had waged until then and the First Stadtholderless Era (1650-1672) came to an end. Foreign policy also took a different course. William III ensured good ties with the opponents of France. He wanted to frustrate France’s claims to new territory in the future.

Although the future seldom has appeared so bleak as for the inhabitants of the Republic of the Seven United Netherlands in the Disaster Year 1672, the country did not vanish despite these upheavals and the Netherlands remained a vital and vibrant nation to this day.