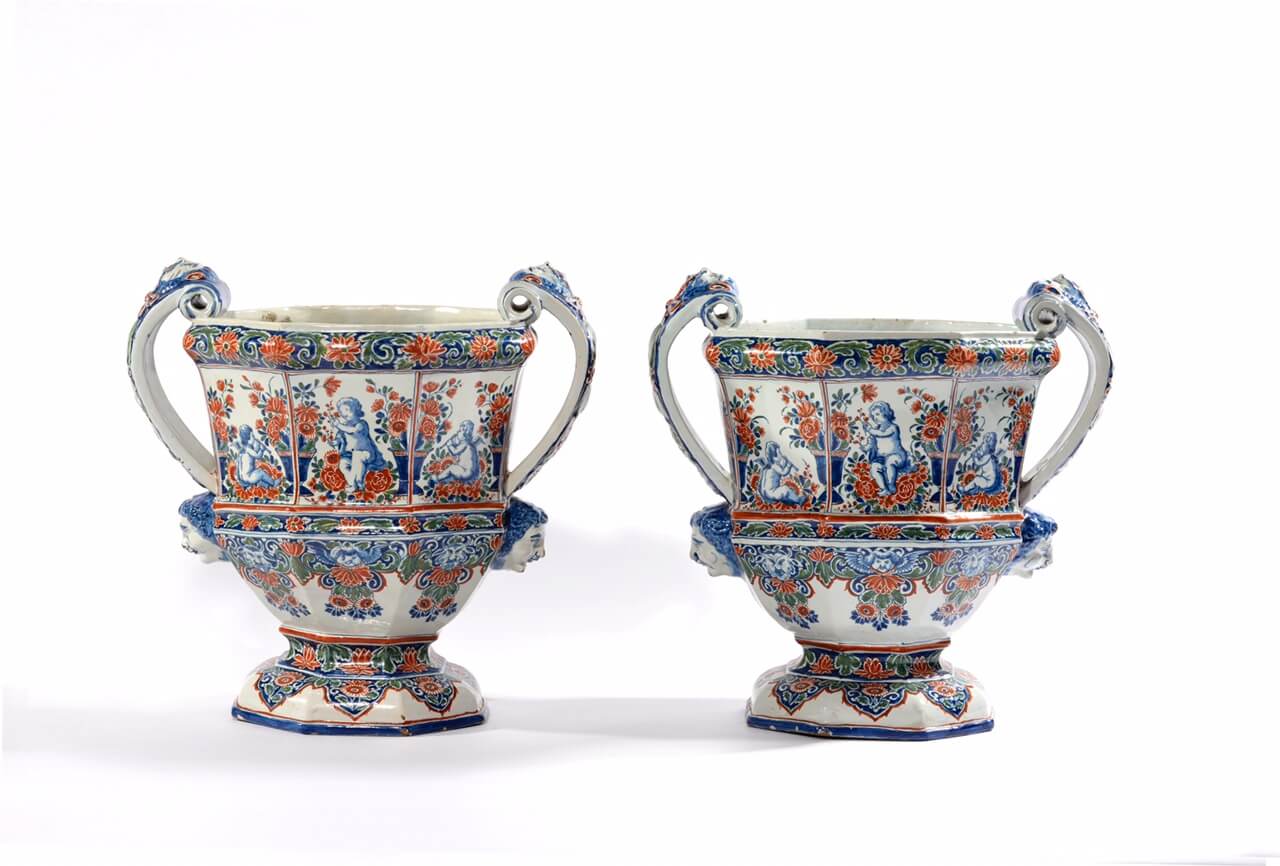 A widespread interest in exoticism and eclecticism took hold in the late nineteenth century during a period known as the Aesthetic Movement. There was a rediscovery of the Golden Age of Delftware as collectors and intellectuals sought out objects designed in an orientalist style. This marked the first serious attempt to assemble, classify and study Delftware. As such, the terms and labels used to identify Delftware are sometimes anachronistic, including the usage of the descriptive title “cashmire.”

The name, “cashmire” is derived from the fine woolen shawls that were imported from India and were extremely in vogue amongst European ladies from the high society. Many nineteenth century collectors  viewed the exotic motifs and colors as similar to the very delicate grand feu decoration of some Delftware. Thus, the name “cashmire” became an identifiable term for the Dutch ceramics.

The “cashmire” palette first appeared in Delft potteries between 1700 and 1720. In Delffse porceleyne, Van Dam defines it as “a particular pattern of spray of flowers completely filling the space on ribbed vases and jars.”[1] One source of inspiration for Delft potters was the arrival of the Chinese famille verte (Kangxi period) in Europe at the end of the seventeenth century. The Chinese designs encouraged Delft potters to improve the grand feu technique; the colors became more intense and new shades appeared.[2] 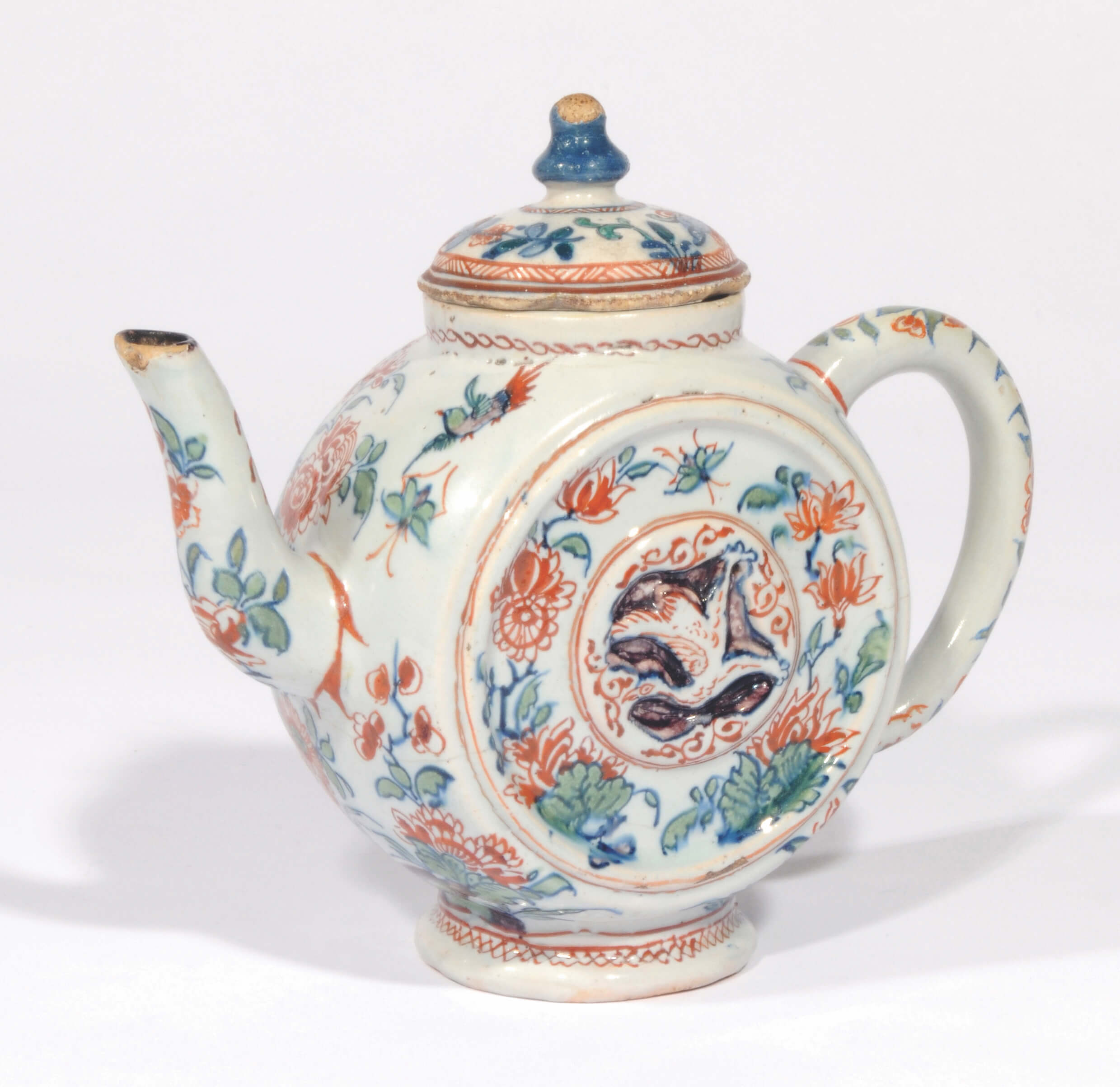 Like the Chinese polychrome porcelain, the decoration is often executed a compendario, which means that there are a limited number of colors. The Delft potters substituted the oriental palette of yellow and blue for a three-color harmony of green, red and blue. The gradual usage of manganese and yellow magnified the delicacy and precision of the design. The meticulous decoration is characterized by the use of very tight motifs that are surrounded with orientalist subjects, such as vases of flowers, symbolic objects, birds,  lambrequin, foliated scrolls and leaves. For example, many elements of this “cashmire” palette teapot and cover made by the factory De Roos are faithful reflections of the Chinese famille verte patterns. Flowering insects and branches circle the central roundel, which encloses a phoenix, a mythical Chinese bird that only appears to announce good news.

The Delft potters ingeniously incorporated a range of artistic inspiration in their designs. One such design source was the French baroque style that reigned during the age of King Louis XIV. The artistic imprint of Versailles became visible in Dutch decorative arts, particularly in the “cashmire” pieces. After the revocation of the Edict of Nantes in 1685, many French architects and decorators fled from the threat of Protestant persecution. Many prolific figures settled in the Netherlands, including the renowned  designer and engraver Daniel Marot. He became the official architect of William III, Prince of Orange, who entrusted him with the decoration of his residence, Paleis Het Loo. In his palace designs, Marot exported the style of Jean Berain, one of Louis XIV’s official designers at the Manufacture des Gobelins.

The style of Jean Berain is characterized by the delicate use of arabesques and whimsical grotesques that originally derived from the Renaissance. Using light floral patterns, Berain famously combined foliage with human and animal forms that prefigured the rococo movement.[3]His style was adopted by the majolica potteries from Rouen, where the use of lambrequin evolved toward an extreme refinement. Multiple garlands of flowers, draperies, scrolls, and pendants were added in order to form magnificent blue and white embroideries motifs. The “cashmire” decoration on Delftware presents many similarities with Berain’s designs.

Many shapes of the cashmire pieces originated from European silverware models. The transformation of materials used for the cashmire pieces, from metal to earthenware, undoubtedly required an exceptional grasp of ceramic production.[4] Thus, the Delft pieces designed in this style were executed by the most renowned potters and factories.

De Grieksche A (The Greek A) factory was among the notable producers of the cashmire style. This beautiful pair of garden urns are marked PAK in iron red for Pieter Adriaensz Kocks, the owner of De Grieksche A factory from 1701 to 1703. According to Erkelens, “the multi-angular form combined with the monogram is similar to the silver holders for orange trees that Louis XIV had made in 1676.” They certainly were expensive orders, possibly commissioned by the court, the nobility or the aristocracy in Holland, England and France. 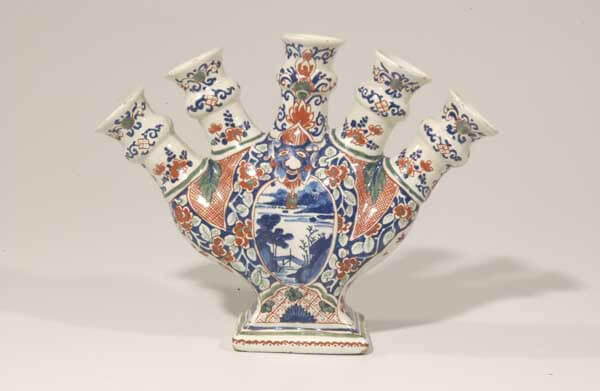 Queen Mary II had an unparalleled passion for Delftware and gardening. As Paleis Het Loo inventory reports, she ordered several vases and urns for the display of flowers and plants. Also, several fragments of a ‘fan shaped flower vase’ marked LVE for Samuel van Eenhoorn (the owner of De Metale Pot [the Metal Pot] factory from 1691 to 1721) were excavated in Paleis Het Loo in 1979. This similar tulip vase, also marked LVE, could have easily been displayed in a royal garden or a noble family collection. The five knopped nozzle vase is delicately decorated with floral sprigs and diamond and scroll devices surrounding a very serene blue and white Chinese hilly landscape.

Many impressive pieces also bear the mark of Lambertus van Eenhoorn, whose speciality was in the production of garnitures. This magnificent seven piece garniture is comprised of three ovoid vases and covers, a pair of double gourd shaped vases and a pair of beaker vases. The production of this complex set was clearly a technical tour de force. Also called ‘mantel garnitures,’ they were used as a fireplace decoration during the summer months. The luxuriant decoration is characterized by horror vacui (fear of the empty), the filling of the entire surface with motifs that are almost covering the white glaze. 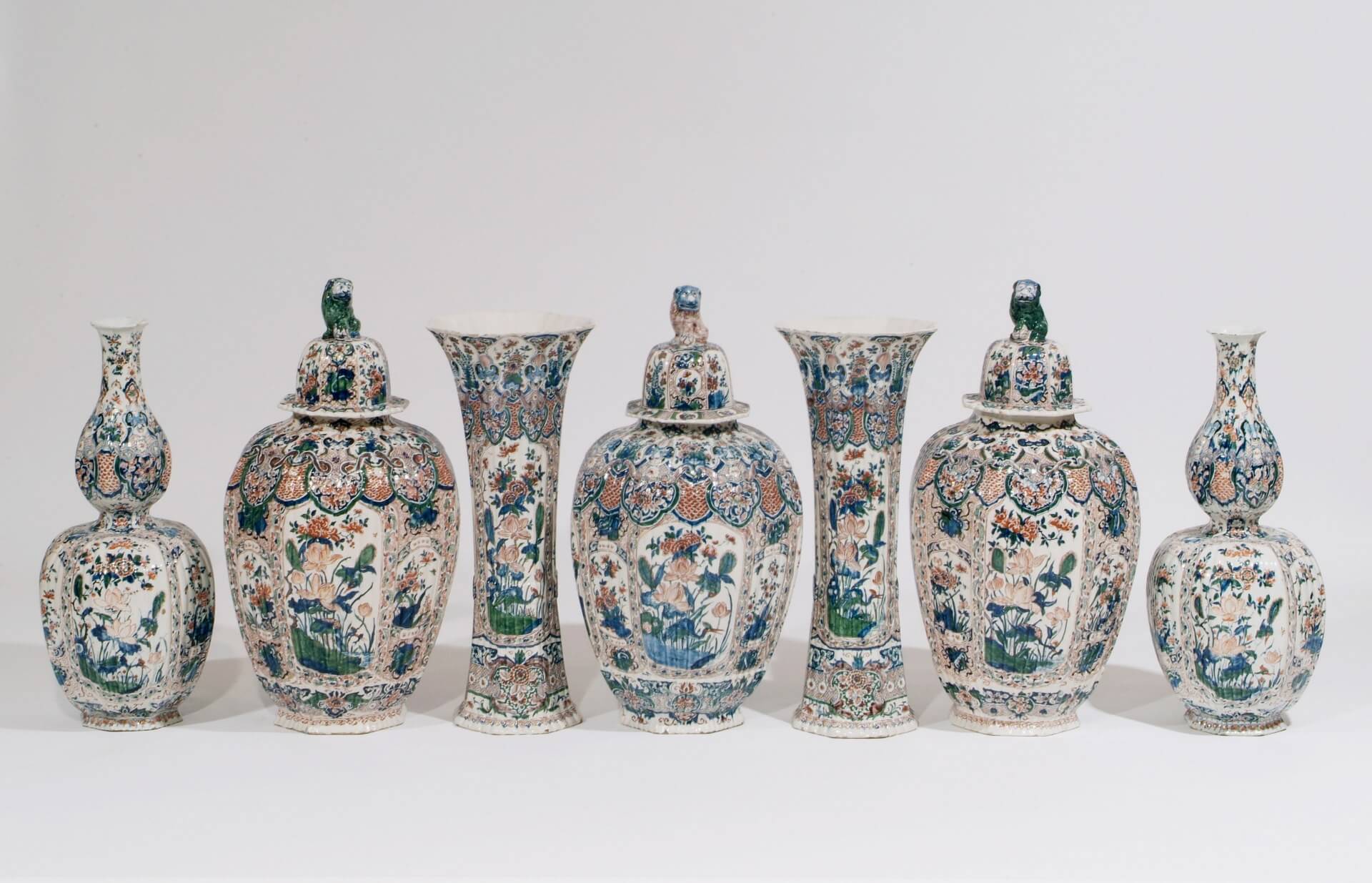 The cashmire palette was only successful for two decades despite the fact that within the first years of the eighteenth century, the style had conquered the international market. The production of such elaborate pieces was probably too expensive, and the development of the petit feu colors gave the Delft potters new opportunities of experimentations.