The ‘t Fortuyn (The Fortune) factory was started in 1661 by Joris Jansz. Mesch, and was located on Lange Geer alongside De Metaale Pot (The Metal Pot) and several other Delftware factories.1 The factory enjoyed a long and successful existence, although a portion of the history and employee details can only surmised because the factory is only sporadically mentioned in the deeds.2

Joris Jansz. Mesch quickly built a successful pottery when he purchased the property with borrowed money in 1661. Within ten years, he repaid his debt and even purchased several houses.3 Going forward, ’t Fortuyn factory was a financially stable and well-run business with the succession of owners following Joris Mesch’s death in 1674. The factory was then managed by his widow Judith Philipsdr. Van Velsen until her death in 1691, after which her children sold the factory to Simon Jorisz. Mesch in the same year.4 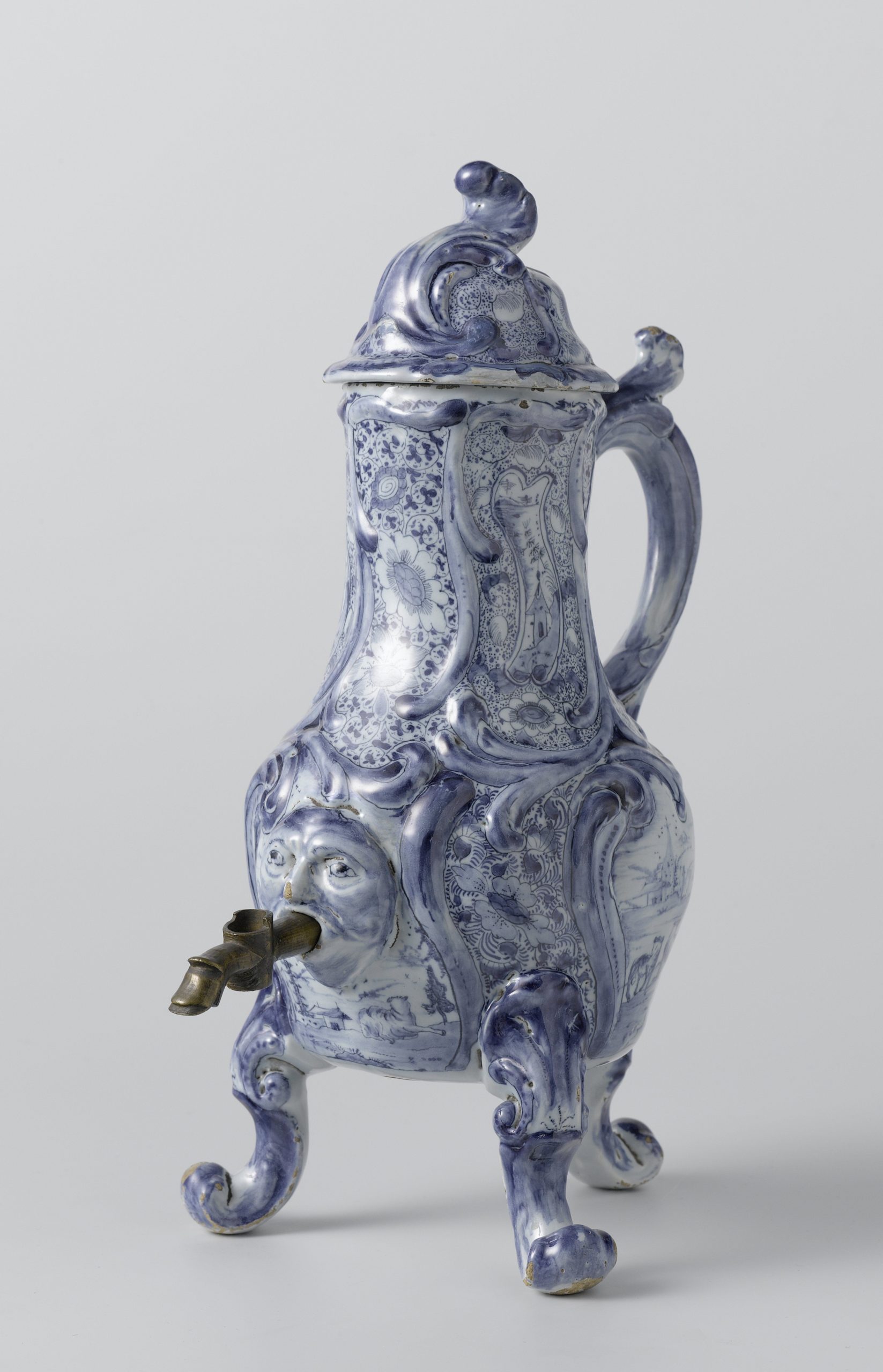 Simon Jorisz. Mesch, the son of the founder of ’t Fortuyn, expanded the outreach of the factory and conducted business with Amsterdam, Harlingen, Gorinchem, Middelburg, Hulst and Zeeland.5 After his death, his widow and heiress Adriana van Berckel sold the factory to Jacobus de Waal for the purpose of Joris van Oosterwijck in 1706, whose widow and estate holder Maria Verbrugge initially continued the business alone, but later together with her next husband Adam de Wit. After her death in 1726, Adam de Wit inherited the factory.6

The factory experienced its peak of popularity during the second half of the eighteenth century. In 1753 Pieter van den Briel bought the factory from Adam de Wit, and managed it with great passion until his death six years later. In 1764, his widow Elisabeth Elling-van den Briel registered a mark, composed of the letters WVDB. Next to her mark registration is an engraving of a tile painting that represents the sign affixed above the factory entrance.7 The tile painting displays the goddess Fortuna surrounded by the city of Delft’s coat of arms, a wreath of flowers and all kinds of objects such as bottles, saucers and a teapot. Two workers stand next to her that symbolize the skills of the factory: one is a pottery turner and the other is a painter. The blue and white coffee urn, in the collection of Het Rijksmuseum, Amsterdam (inv. no. BK-NM-11377) is marked for Elisabeth Elling-van den Briel.

‘t Fortuyn factory was one of the most productive of its time. Despite the large output, the pieces were designed and executed with remarkable quality. The factory produced many types of objects, from decorative pieces to refined tablewares. Elisabeth Elling-van den Briel died in 1786, and the inventory created after her death reflects her wealth and status.8 Her home was filled with all types of Delftware, including six large dishes and at least fourteen chocolate cups and jars that were stored near the fireplace in the dining room. Several cabinets displaying Delftware pieces were also listed in her inventory.9 Although her son Jan van den Briel was able to inherit the business from his mother, he instead chose to invest in De Grieksche A (The Greek A) factory.10 ’t Fortuyn was sold to an acquaintance of the family, Anthonij Frerking, who appears to have bought it for his son, Johannes Hermanus. 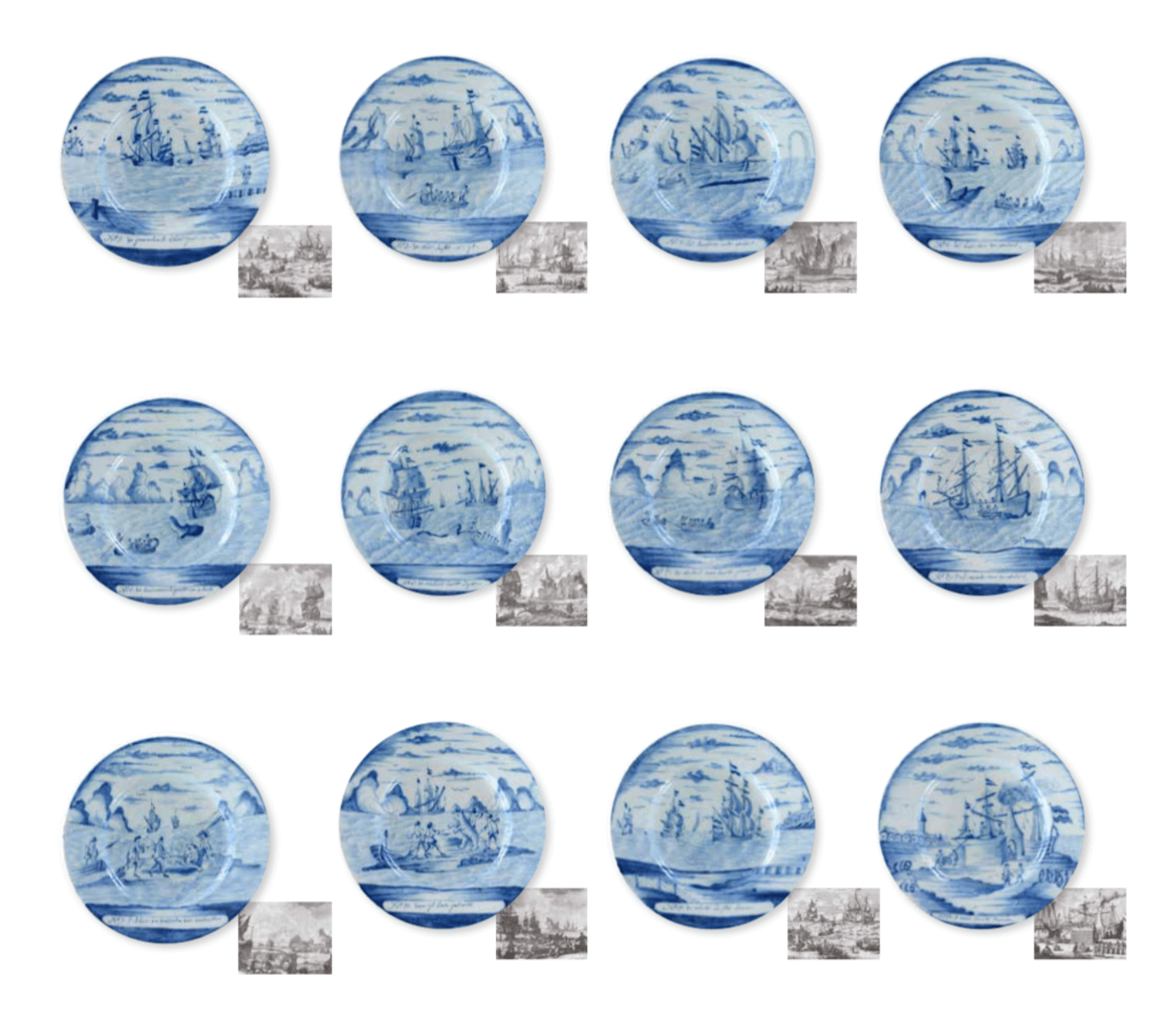 Johannes Frerking was the shopkeeper of the factory from 1771 until 1784. The objects made during his management were either marked with the initials J:H:F and/or the name of the factory. This set of twelve whaling plates from circa 1775, is elaborately marked J:h:F / 1402 / in:t:Fortuijn for Johannes Hermanus Frerking. The plates are each painted with a different scene of the whaling trade above a numbered label inscribed with the activity depicted. The series of these so-called whaling plates were decorated after the print series of the “Groote Visserij” (“Great Fishery”) engraved by Adolf van der Laan (circa 1690-1742) from drawings by Sieuwert van der Meulen (before 1683-1730). A comparison of the present set of plates and the sixteen prints reveals that the Delft painters depicted only the main scenes and simplified the background and figures. Similarly, the descriptive captions were shortened to the allotted space on the plates, and some in the whaling series were even interchanged with those from other prints. All of the Delft series vary slightly from one another in the details of the scenes and the spellings of the captions.

In 1784, Anthonij sold part of the ‘former’ ‘t Fortuyn factory to George Frederik Elsenhans, which marks the end of the Delftware production.