By the late seventeenth century, the French court of Louis XIV (1638-1715) was the model of splendor and taste for all of Europe. Every court envied his display of wealth in silver, the exalted material that signified wealth and status. Silver is a precious metal, which distinguishes it from wood, glass and porcelain which do not have any inherent value.[1] Silver coins could be melted down for utilitarian and decorative objects, however the precious metal was not invulnerable to a changing economy. Silver was subject to the numerous fiscal crises of the late seventeenth and eighteenth centuries, especially in France. 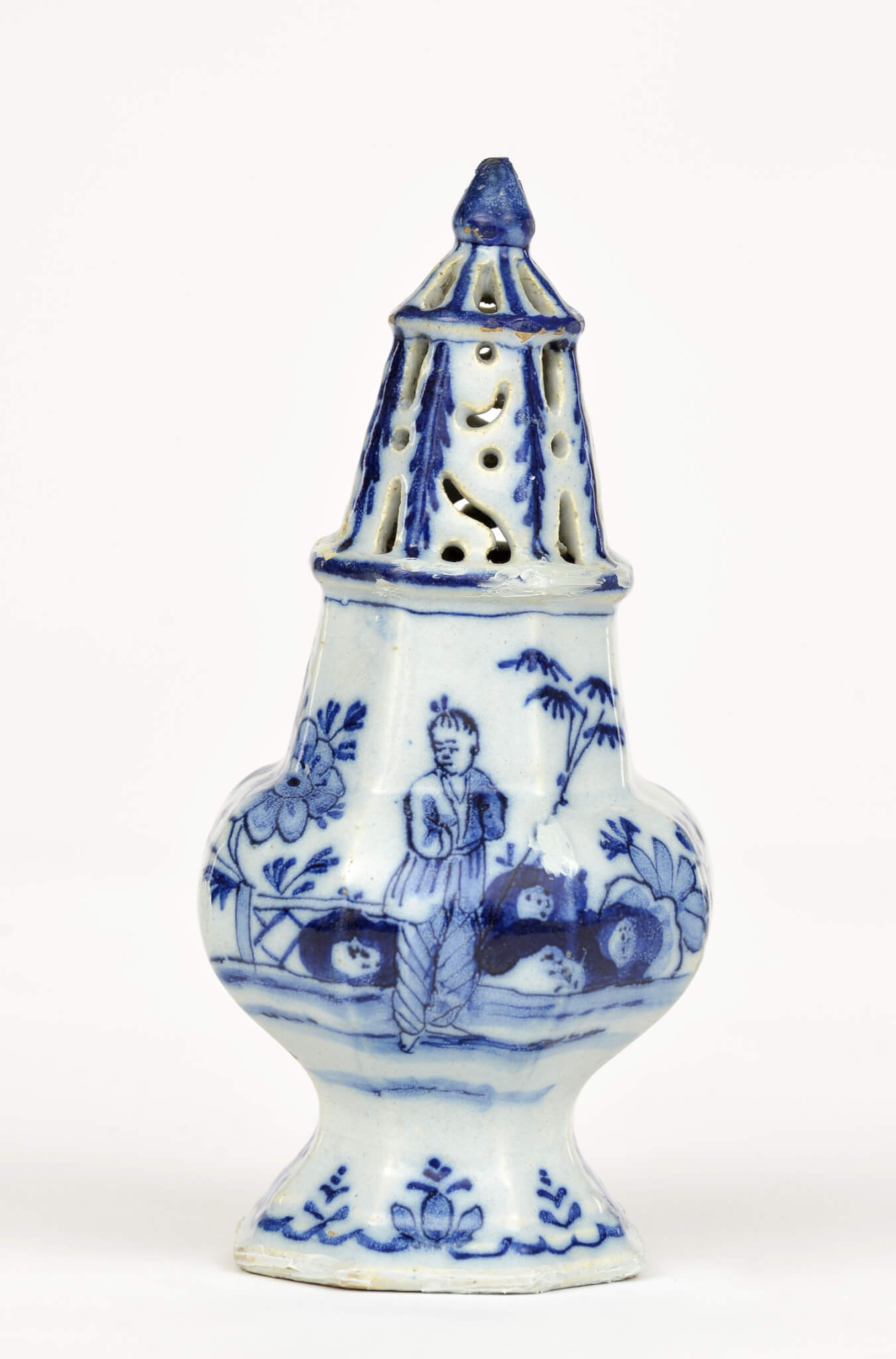 France’s involvement in expensive wars forced both Louis XIV and Louis XV to order all available silver (including the silver furniture at Versailles) to be melted down to replenish the country’s coffers. This first happened in 1689, and again in 1708. In the process, his silver service was replaced with a Chinese porcelain blue and white service. The melting of silver from grand houses encouraged the French faience industry to increase the production of both ornamental and functional pieces, worthy of royal and aristocratic tables. In their sudden need for such silver substitutes, the marchands merciers had to reach beyond the local factories to the potters in the other parts of Europe, and particularly in the nearby Netherlands.

It was for this reason, among others, that Dutch Delftware and other earthenware reached its highest level of production. The ceramic forms followed the shapes of the original silver objects and were made with the finest quality. An example is this blue and white octagonal sugar caster, made in Delft around 1710. This form is based on a metal model, generally silver, which remained popular on the Continent and in England from the eighteenth century onward and was used for both pepper and sugar. The Delft caster has a pronounced baluster-form body. The front is painted with a chinoiserie figure standing before pierced rocks and a garden fence amidst bamboo and flowering shrubbery. The reverse is painted with a floral sprig and the faceted foot with floral device. The upper section is pierced with small holes and variously shaped slits around pendent foliage, just as a Dutch silver example by Pieter van der Toorn in the collection of the Boijmans-Van Beuningen Museum in Rotterdam (inv. no. M.B.Z.78). Although a much later date, the shape of this silver caster has several similarities to the Delft one. These casters were filled with sugar candy that had been finely ground in a mortar, which resulted in a coarser sugar than we are used to today. 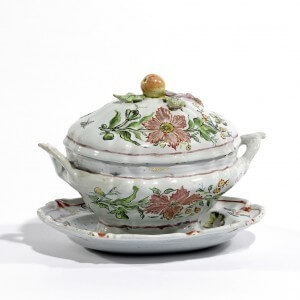 Dining habits changed significantly during the late seventeenth and eighteenth centuries with the fashionable dining ‘à la Française’ (in the French manner). Inspired by the French court of Louis XIV, serving dishes were arranged in an ordered and symmetrical fashion on the table. Each guest would serve themselves from the numerous platters, bowls and tureens within their reach. The multiple courses provided an opportunity to display and use a variety plates, serving vessels and a panoply of decorative objects. This encouraged not only the development of a greater variety of silver wares, but also a large diversity of Delftware. One of the new tablewares was the tureen, an expensive form that functioned as the table’s dominant centerpiece. Tureens were also made as smaller items for serving sauces and condiments. This polychrome petit feu lobed oval sauce tureen with cover and stand was made in Delft around 1760. The bombé tureen and cover are each painted in iron-red, yellow, blue, rose, green and black with a large tulip spray and other flowers. The cover is surmounted by a knop formed as a reddish-yellow apple sprig with three green leaves. While it may be possible that the tureen derived from a French or German faience original, it also follows the shape of silver tureens.[2]

Delft potters were among the beneficiaries of this ‘new’ Louis XIV late baroque taste. Factories continued to receive orders for services comprising the familiar forms of plates, dishes, and bowls, as well as newly desired objects that complemented the changes in dining styles. Delftware potters made a wide range of objects that were designed after silver forms. In addition to tureens and sugar casters, other small objects included dishes, candlesticks, tea and coffeepots and salt cellars. Delftware potters also fearlessly undertook larger and more impressive objects such as fountains or cisterns and wine or glass coolers.

This pair of Delft blue and white, fluted oval monteiths, from circa 1730, have the typical shape of silver glass-coolers. The earliest glass-coolers were made of silver and were round or oval. They often have lion’s-paw feet and handles formed as heads or lion’s heads holding rings in their mouths. The similarities between early silver coolers and this Delft monteith are striking.

Each monteith is marked CK 3 2 and 14 in blue for Cornelis Koppens, the owner of De Metaale Pot (The Metal Pot) factory. They are painted around the compressed body with a wide border of stylized fruit clusters and leaves pendent from leaf scrolls and alternating with smaller floral pendants. Eight lobes encircle the rim, each centering a floral sprig amidst scrolls extending to form a narrow border around the rim. The interior side of the lobed rim is painted with a beribboned Chinese symbol above a scroll border. At the end is a handle formed as a lion mask, clasping an integral ring in his mouth that is molded in high relief. Affixed to the bottom are four blue paw feet. Glass coolers were filled with ice or cold water, and the glasses were suspended upside down with their bowls in the cooler, their feet supported by the scalloped rim. If large enough, the cooler was also used to chill wine bottles in the ice. At the time, the larger houses and castles had ice-cellars dug deep into the ground, in which temperatures stayed low, and ice, harvested from ponds during the winter and packed in straw, could be stored during the warm summer months.

The popularity of refined faience on the dinner tables of the European courts and noble houses increased the prestige of Delftware, and the pieces created at the end of the seventeenth century and the beginning of the eighteenth century came to rival and sometimes even surpass their silver counterparts.

[2]  A soup tureen of a related form, marked for De Porceleyne Byl (The Porcelain Axe) factory, in the Musée National de Céramique, Sèvres (inv. no. MNC 5001), is illustrated in Fourest 1980, p. 146, where the author suggests that “the shape [is] borrowed from metalwork [and shows] the kind of efforts that were being made at Delft to find sources of inspiration other than those of the past”.