Every month we present a special object from the Aronson Antiquairs’ collection. This month we would like to show this polychrome petit feu nursery set.

This delicately painted nursery set was made around 1725 in the city of Delft. It comprises a cradle, a high chair, a baby walker and a so-called ‘bakermand’ (nursery basket), which are all painted with so-called petit feu colors. The petit feu firing was one technique that allowed Delft potters to expand their color palette, first used in the beginning of the eighteenth century. The technique requires three firings, allowing the potter to use colors that could not withstand high temperatures in the kiln during the second firing (grand feu). The gold and enamel paints were applied after the biscuit firing, the tin glazing and the transparent glaze that added extra gloss (with or without grand feu decorations). With the petit feu colors on top of the glaze, the objects were fired again at a lower temperature (about 600 degrees Celsius) in a smaller kiln known as the moffeloven (muffle kiln).

The seventeenth and eighteenth century baby ensemble consisted of, among other things, a cradle, a fire basket and a so-called bakermat orbakermand, all made of wickerwork. A bakermand is an elongated, low basket or wooden box in which a baby was cared for. In this nursery basket, the nursing mother or the baker (nurse) could care for her child’s needs on the comfort of her own lap. The basket had a high back to protect the child from a draft, as a baby’s vulnerability to cold was especially concerning at that time. The cradle was therefore placed close to the fire. The engraving by Willem van de Passe (circa 1624), Woman changing a child, shows a baker mat and a cradle. A penny print from the second quarter of the nineteenth century shows a nurse (baker) caring for a baby while seated beside a cloth-covered fire basket. The text below the image reads:

(“It is the nurse by whom
The child is warmed and caressed; But it is the mother by whom
It is fed on her breast”)

Reminiscent of this print is a Delft polychrome figure group of a nurse holding a child and standing beside a fire basket, in the collection of the Kunstmuseum, The Hague (inv. no. OC(D)246-1904), illustrated in Van Aken-Fehmers 2001, p. 314, no. 104.

As soon as the child could sit independently, he was placed in a high chair, and when he started to walk he was placed in a baby walker, which already existed in the sixteenth century. Until the second half of the eighteenth century, parents strived to dress their children as adults as early as possible. Therefore real children’s clothing did not exist. Both boys and girls wore long dresses in their infancy, as can be seen in the dress that is worn by the child in the baby walker. Long dresses facilitated ease in changing untrained children. Boys were fitted with trousers between the ages of four and seven and from then on wore miniature versions of adult men’s suits. Girls wore the long dress until they reached the age of thirteen-fourteen, after which they dressed as fully grown women.

The present nursery set is extremely rare. An identical model of this cradle in grand feu colors is illustrated in Aronson 2016, p. 79, no. 34. A similarly modeled cradle, dated 1715, appeared on the market in 2021. This made us carefully date this set to the middle of the first half of the 18th century. 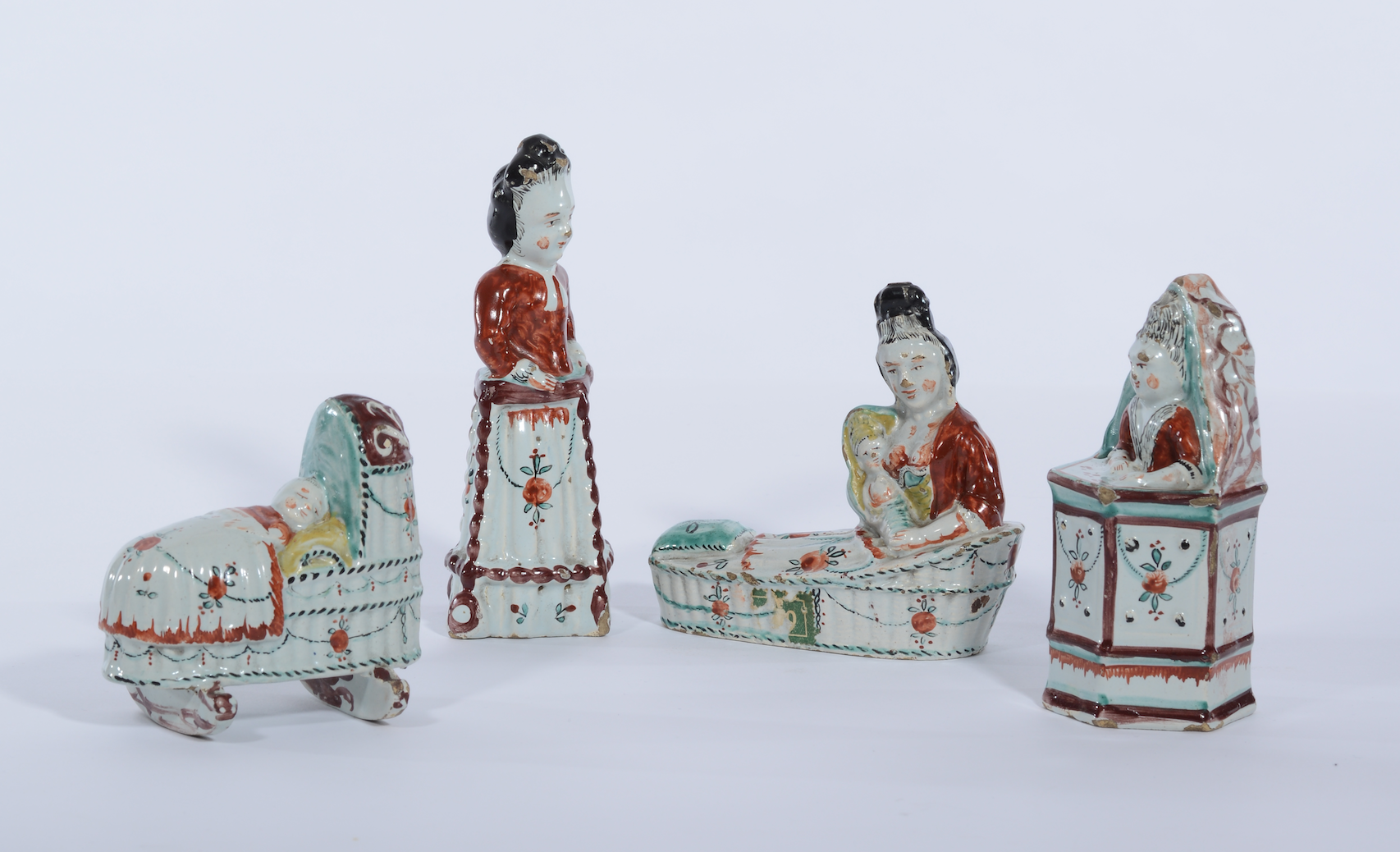 Comprising a cradle, high chair, a baby walker and a so-called ‘bakermand’ (nursery basket), all painted in the red, mint green, yellow, and black with floral garlands; the cradle with a solid hood molded at the top with scrolls, the head of the baby turned to the left, revealing her hands resting on the edge of a coverlet draped over the cradle’s sides and end; the hexagonal highchair with the baby with a high hairstyle and wearing a jacket seated inside; the baby walker with four wheels with a baby standing in a long dress and holding the top of the walker with his hands, the ‘bakermand’ modeled as a elongated, low basket with a pillow at the foot end, in which the swaddled baby is being fed by the nurse (baker), wearing a bodice and a mantle.