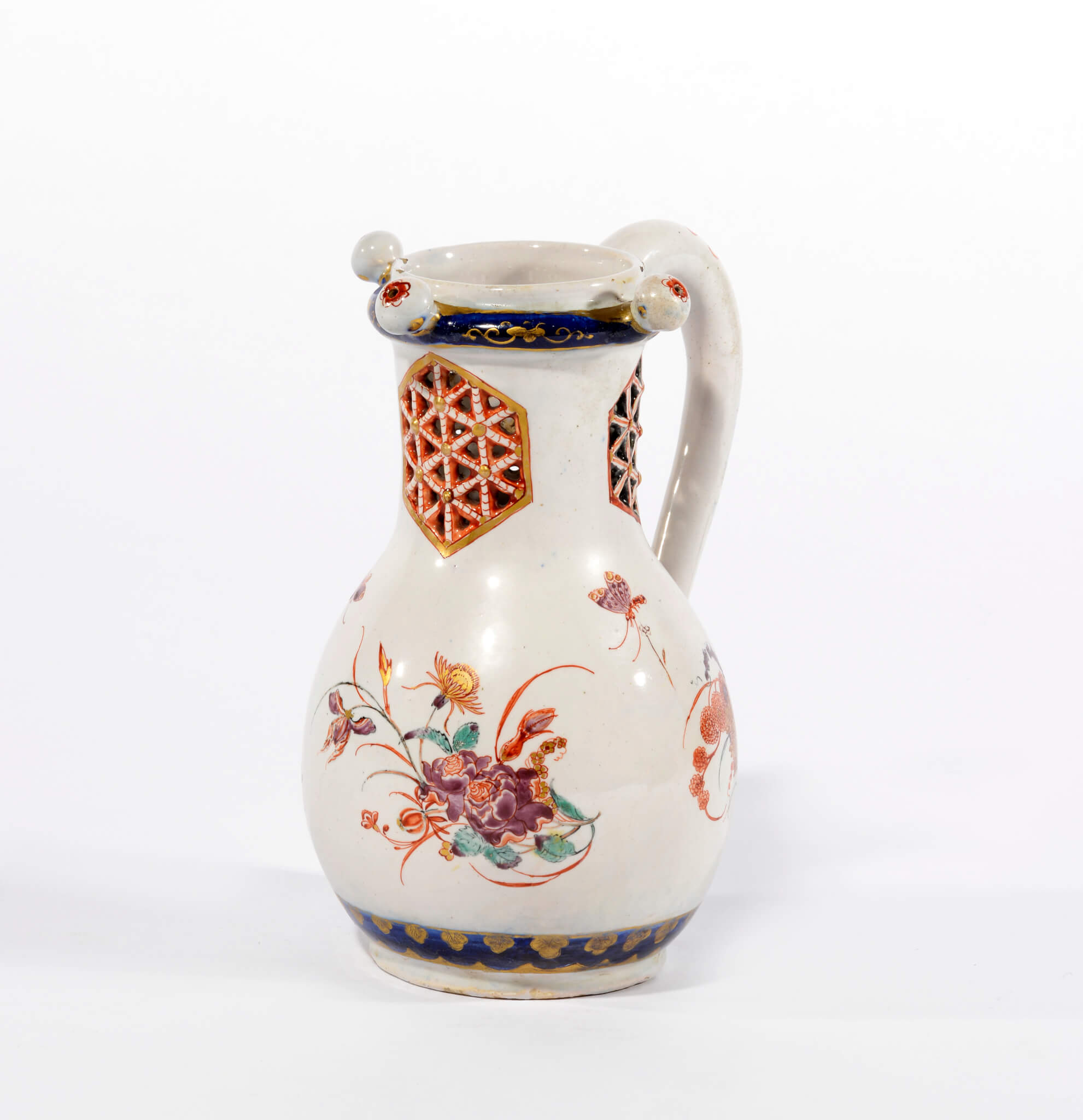 Every month we present you a special object from the Aronson Antiquairs’ collection. This month, we would like to show you this petit feu and gilded puzzle jug from circa 1730.

The puzzle jug is one of the oldest jokes in the Delft potters’ continually playful repertoire. Puzzle jugs were intended as an amusing tavern game or a conversation piece during a dinner party. One can only imagine the popularity of these objects as drinkers attempted to consume the contents without causing a spill. After a long and alcohol-induced evening, it became an increasing challenge. The pierced openwork on the neck of the jug intentionally prevented any liquid in the body from being poured or consumed, and provided rounds of hilarity when the uninitiated attempted to drink from the vessel. Additional holes that were cleverly concealed made the challenge even more confounding.

Since it was difficult to produce these jugs, and based on the fact that they are often dated, they probably were produced on special order. Puzzle jugs painted with petit feu colors are rare, and most have been costly at the time. The petit feu firing was a technique that allowed Delft potters to expand their color palette, first used in the beginning of the eighteenth century. The technique requires three firings, allowing the potter to use colors that could not withstand high temperatures in the kiln during the second firing (grand feu). The gold and enamel paints were applied after the biscuit firing, the tin glazing and the transparent glaze that added extra gloss (with or without grand feu decorations). With the petit feu colors on top of the glaze, the objects were fired again at a lower temperature (about 600 degrees Celsius) in a smaller kiln known as the moffeloven (muffle kiln). The initial source of inspiration for the petit feu enamel painting came from Asian Kakiemon porcelain. However, Delft potters were also influenced by the European-style decoration on Meissen porcelain

Iinventory lists of the factories and of the potters’ shops occasionally mention a so-called ‘suijgkan’ (‘suction-jug’), which refers to these vessels. The name ‘suijgkan’ hints at the secret of solving the puzzle of the jug. It was not the intention to pour or drink from it like a normal jug or tankard, as the pierced openwork on the neck of the jug makes clear. The jugs were intended as a game or a conversation piece during a dinner party. The answer of solving the puzzle is in the trick of the construction. Generally the hollow tubular rim has one functioning nozzle, and two or more ‘dummy’ nozzles issuing from a tubular rim that is connected to the hollow handle, which forms a siphon from the lower body. The suction, however, is broken by a small hole beneath the top of the handle, and the solution to the puzzle is for the drinker to place his thumb over the hole in order to create the vacuum that allows him to suck the liquid from the jug up through the handle, around the rim and out through the one functioning nozzle. 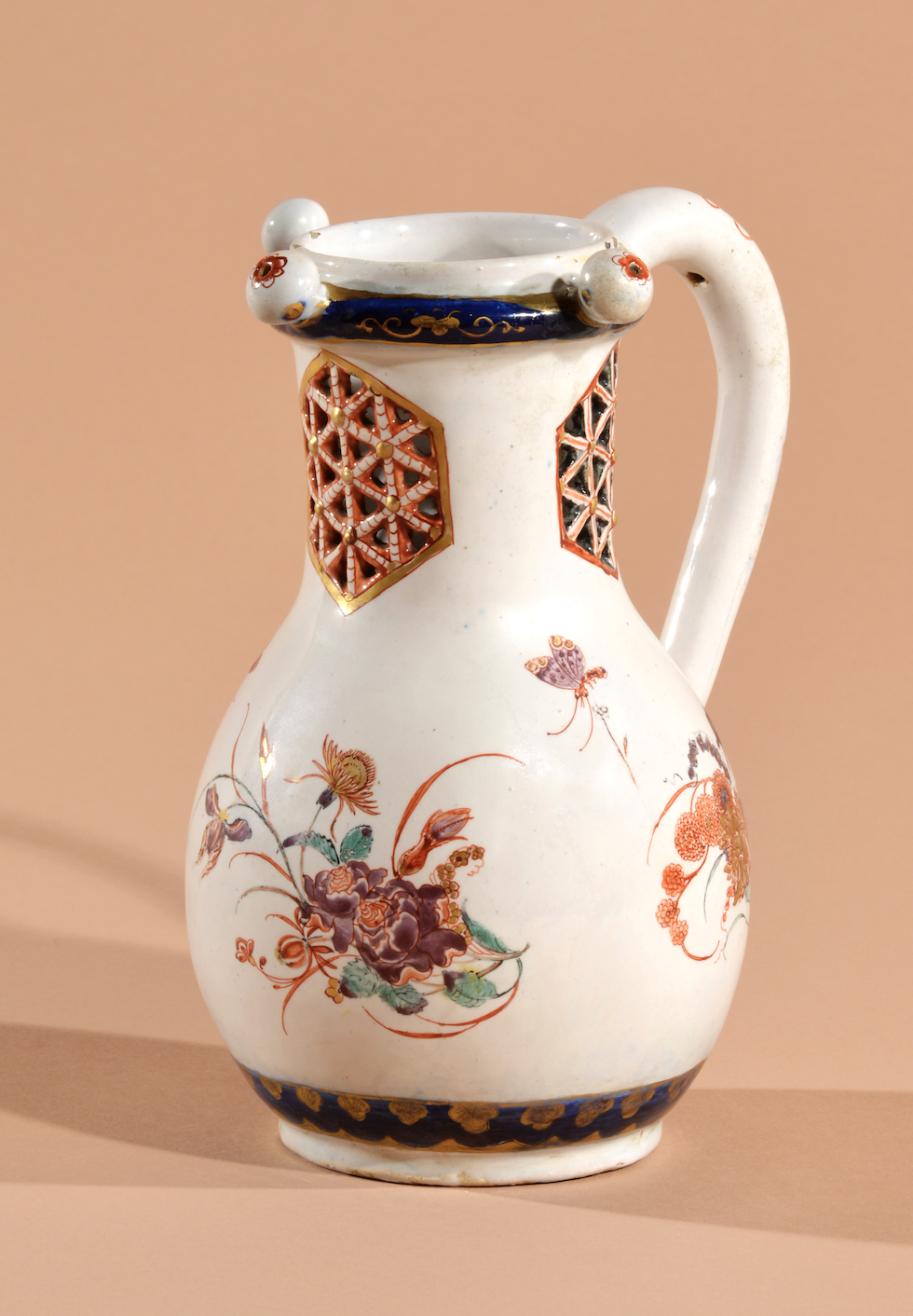 Painted around the pear-shaped body with three winged insects and a snail between three clusters of iron-red, manganese, green and gold flowers above a blue border embellished with gilt leaves and a scalloped band above the footrim, the cylindrical neck pierced with three hexagonal panels of trelliswork heightened in iron- red and gold beneath the blue-ground tubular rim decorated with four gilt scroll devices between the three spherical nozzles and the tubular loop handle, its outer edge with three beribboned leaves.