Every month we present you a special object from the Aronson Antiquairs’ collection. This month it is a pair of blue and white strawberry dishes. What a joy it must have been to attend a dinner at a wealthy family in the eighteenth century. Not just a delight to be able to taste such foods, but also especially pleasing to the eye. In the eighteenth century dining on the French way was in fashion in Europe. Inspired by the French court of Louis XIV (reigned from 1643 to 1715), the dishes were laid out on the table per course and guests could serve themselves from the platters within their reach. This of course resulted in the most beautiful tableware, such as plates, tureens and these Delft blue and white strawberry dishes and stands.

The well-laid table was the culmination of splendour. Not only during the serving of the meals, often in tromp l’ceil terrines, but also the table itself was adorned with, for example apples, pears and grapes made of Dutch Delftware. The strawberry strainers will be used mainly at the end of the dinner, when fruits and various pastries were served. Although the strawberry already grows in the Netherlands since Roman times, it was in the eighteenth century probably an ingenious novelty. The strawberry plants formerly functioned mainly as decoration or for medical use. The plants were not very productive, and moreover, the fruits were very small. The strawberry as we know it today, exists only for about 200 years.

The red of the strawberries will have looked beautiful in contrast to the blue and white colour of the strainers. Although the use of a strainer, like these dishes and stands, has fallen a bit into oblivion as we simply rinse the strawberries in their box made out of cardboard or plastic, such objects were often used in the past. In this way, the strawberries were placed on the strainer to rinse the fruits under a pump, whereafter the stand could directly be placed on its dish on the table. Another feature of the use of a strainers was that the fruits remained tenable longer since they could ventilate. Besides the fact that these domestic objects were highly efficient, they were also a feast for the eye. The strainers were always created in pairs in the most beautiful colours and decorations, which corresponded perfectly to the dishes. 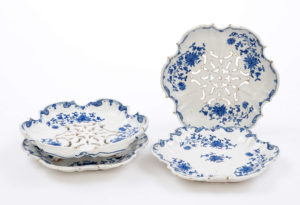 Pair of Blue and White Reticulated Strawberry Dishes and Stands

Each piece of hexafoil shape with a scalloped and barbed rim edged with a narrow border of stippled foliate-scroll-edged small panels alternating with foliate trefoil devices issuing delicate scrolls, the interior painted with three oriental floral sprays around a smaller spray in the center of the stands or around an elaborately pierced hexagon in the center of the dishes, the exterior of the dishes with a meandering stylized vine border and affixed on the bottom with three short scroll feet.