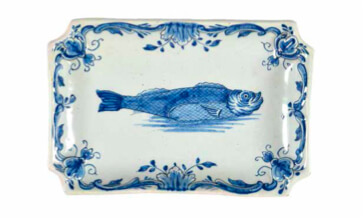 Every month we present you a special object from the Aronson Antiquairs’ collection. Since the herring season started two weeks ago in the Netherlands, how nice would it be to serve a herring on these beautiful 18th-century blue and white herring dishes? Although many foreigners find it hard to stomach, it is a typical Dutch delicacy.

The Dutch, inhabitants of the Netherlands, have been eating raw herring for over a thousand years. Although the Dutch call it raw herring, it is in fact not raw. The herring has been frozen and then laid in salt for a couple days to ripen the fish (soused herring). At first the people fished for personal use, but around the year 1000 the herring fishery arose. Fishing villages emerged rapidly along the coast, since the herring became the main food for the inhabitants. The herring became so popular that it even was called the ‘silver of the sea’, which resulted in the fact that the herring fishery became the industry of large economic importance to the Netherlands from the sixteenth to the eighteenth century. Not only was it nutritious, but it was also inexpensive and it had a reasonable shelf life. When the fish was kept in a barrel of salt, it could be eaten all winter. To get the salt off the fish, they had to clean it with milk; to get the real herring taste it is usually eaten with raw onions. For four centuries, between 1415 and 1861, the drifter was the ship with which herring was caught. At its peak, during the first decade of the seventeenth century, the herring fleets are calculated to have comprised 770 drifters. Centers for the herring fishery on the North Sea and on the Zuiderzee inlet were towns along the Maas River, such as Delfshaven, Maassluis, Schiedam, Vlaardingen, Rotterdam and Brielle, and in the north around Enkhuizen.

Nowadays it is only allowed to catch herring from mid May to mid July, when the fish are the fattest – in other words when they are getting ready to lay eggs. The first ‘Hollandse Nieuwe’ (Holland’s new herring – it is the new herring of the fishing season) arrive on the market in June. The first barrel of herring is officially auctioned for charity in a feast where everyone enjoys the new herring. This year the first barrel was bought for € 53,000 by the fish guild.

Herring dishes are typical of the Dutch kitchen. Possibly, these dishes were part of the standard equipment of a noble / elegant Dutch household in the 17th and 18th century. Apart from the series of plates which depict the story from the herring catch at sea to the delivery at the customer, various types of herring dishes were made. They were shaped like a fish or had an oval or – like the pair in our collection – rectangular shape decorated with a painting of a herring.

Each painted in the center with a scaly herring, the rim lightly molded and painted with foliate scrolls centering at the top and bottom a foliate device issuing leafy stems, and at each of the notched corners a trefoil bud issuing leaves, scrolls and a pendant bellflower.