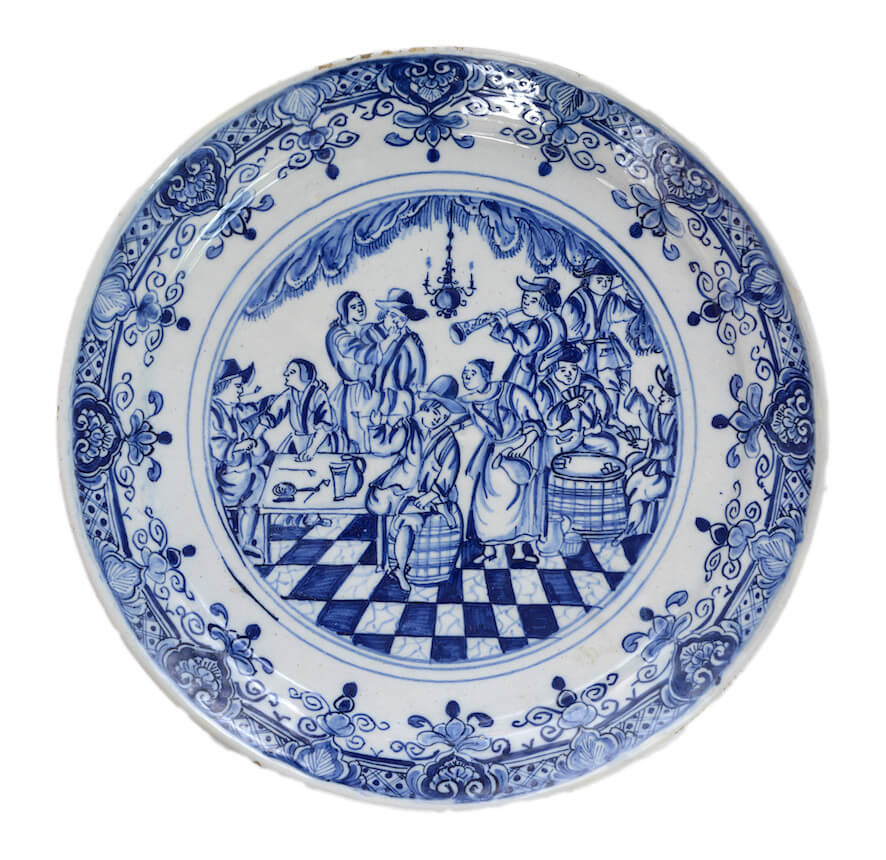 Still lifes, portraits and landscapes predominate in seventeenth century paintings. In the Low Countries, genre paintings enjoyed a distinct popularity, with paintings showing scenes of ordinary people engaged in common activities. Scenes of drinking were a recurring theme in Dutch genre painting beginning in the sixteenth century. Reveling peasants and country people at the tavern and in their homes were frequently depicted in Dutch paintings. Delftware painters were influenced by these popular scenes and recreated them on plates and plaques (so-called pottery paintings) that were designed to hang on a wall. 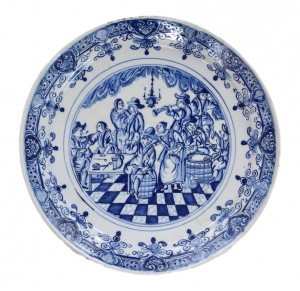 The consumption of alcohol was a normal and accepted behavior in the seventeenth century, a pastime that was often carried on throughout the day. Beer and wine were considered more safe and potable than water because canals and rivers carried disease. Processed water in the form of beer was used for drinking and cooking. While beer was a popular drink for the poor and common people, wine was usually reserved for the wealthy. Although genre paintings provide a window into past lives and activities, one must also consider them as interpretive works of art. Many times, genre paintings functioned as moralistic tales to warn viewers of the dangers of overconsumption. These details often go unnoticed to contemporary eyes, but the message was clear in the seventeenth century: You can enjoy a drink, but do not overindulge. The paintings of the sixteenth and seventeenth century, from which the Delft potters drew their inspiration in the eighteenth century, were also cautionary, moralistic scenes.

The blue and white plate, from circa 1730, shows a merry scene of a group drinking and playing music in a tavern. One figure plays a horn, while the others drink, smoke, play cards and engage in other merrymaking activities. This is a perfect example of a scene with several hidden messages. For example, the card players on the right symbolize gambling. Further, the standing couple in the background and the seated pair on the left are unusually intimate for an eighteenth century scene. The subjects serve as a warning, teaching viewers the perils of these social vices. 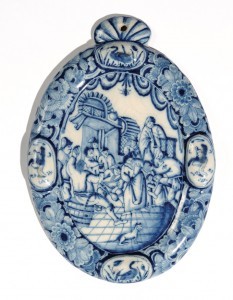 This small blue and white oval plaque, made around 1705, also depicts a lively tavern scene. Peasants are reveling as they watch a couple dancing to the music of a horn or shawm player. A skeptical cat is seated on a tiled floor in the foreground. The scene is framed by a rounded, blue-ground border of large blossoms and foliage. The framed border is interrupted with four molded oval panels painted at the sides with chinoiserie scenes of a dancing Chinese boy (a so-called Zotje), and at the top and bottom the panels are decorated with a long-billed bird amidst grassy plants. An engraving after a painting by Adriaen van Ostade (1610-1685) was the inspiration for this jolly tavern scene. Two different print sources may have served as models for the Delft artist: the etching of ‘The Country-Fair’ by Haarlem artist, Joannes Visscher (1633- after 1692), published by Nicolaes Visscher; and ‘Peasant Couple Dancing in Front of an Inn,’ by Willem de Broen, dated 1705. 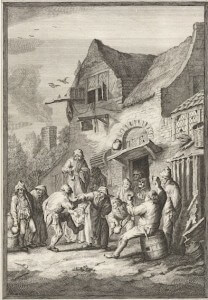 The two aforementioned sources are printed in mirror-image to each other. In this case, the direction of the print compared with the painting on the plaque should not be a limiting factor for identifying the plaque’s graphic source. If a stencil is made of an engraving and then applied to a plaque, both the original print and the image on the plaque would correspond in direction. If that technique was used on the present plaque, then it would favor the Visscher print as the source. Likewise, copies made after engravings or etchings, which are in mirror image, would result in an image on the plaque in mirror image to the original. But it must be noted that no matter what the orientation of the print was, the Delft painter could transfer the stencil drawings in either direction, as he wished.

Furthermore, most seventeenth-century prints are in fact the mirror-image of their original painting or drawing. The Delft artists were masters of adaptation. The scene on this plaque, more frequently found painted in the horizontal shape of the print, is painted vertically. The painter has also cleverly transformed the exterior scene to an interior setting by adding a tile floor with a quirky cat at the bottom and drapery at the top. As can be seen on other plaques, painters used curtains and tiles as props for adapting prints to plaques of different sizes and shapes, as well as a means of creating a cohesive and recognizable domestic scene. Upon close scrutiny, however, both the doorway with its wooden portico, glazed transom and brickwork arch and the various windows of the tavern’s façade remain visible in this indoor/outdoor adaptation. 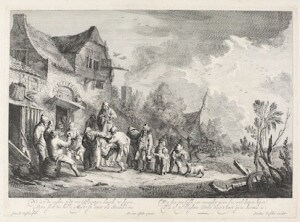 The familiar subject of festive peasants reveling outside a tavern is known as ‘Boerenkermis’ (farmer’s fair). The Dutch word kermis is derived from kerkmis (church service), as this rural fair originates from the inaugural festivities of a new church and the annual celebration of the church’s patron saint, of which pleasure activities and a market also occurred.[1] At the Kermis, as indicated by the text beneath the Visscher etching, boys would buy a koek (gingerbread) for the girl they fancied. Her acceptance of the gift signaled her own affection for the boy.[2] The text beneath the De Broen print describes the joy (young) people would have during the Kermis.[3] 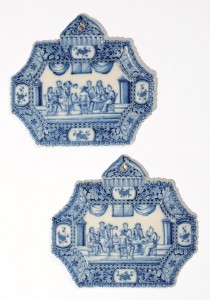 Less moralistic than the examples above is this pair of blue and white octagonal plaques, made around 1730. Painted on the raised central panel is an interior scene of three ladies and three gentlemen seated around an oval table. They are smoking and pouring wine from a bottle into a goblet. Interestingly, the lady and gentlemen on the right are not drinking wine, but are enjoying a cup of tea. Brought by the VOC (Dutch East India Company) from China, tea was a very expensive and rare drink, and became fashionable from the end of the seventeenth century onwards.

As illustrated in this pair of plaques, genre painting did not only depict drinking peasants. Well-to-do townspeople, who gathered to drink and play music at home, were often the subject of seventeenth and eighteenth century paintings. Just as the paintings, these pottery paintings provide a glimpse into the lives of all kinds of people.

[2]  Rhyme of Visscher print:“Nu is’t de reghte tydt om Pleuntjen koeck te kopen, Dan siet die bolle Meyt so soet als Backke-vis. Wie sou om sulk een vreught geen ses mijl komen lopen? ’T Is al te sleghten Dorp daer ’t noyt geen kermis is.” (“Gingerbread for Pleuntjen, I must buy it for her smiles. The rosy-cheeked young maiden who is sweet beyond compare, Who for such a pleasure would not walk at least six miles, Even to her village where they have no country fair.”)