Painted around the pear-shaped body with three winged insects and a snail between three clusters of iron-red, manganese, green and gold flowers above a blue border embellished with gilt leaves and a scalloped band above the footrim. The cylindrical neck pierced with three hexagonal panels of trelliswork heightened in ironred and gold beneath the blue-ground tubular rim decorated with four gilt scroll devices between the three spherical nozzles and the tubular loop handle, its outer edge with three beribboned leaves.

Since it was difficult to produce these jugs, and based on the fact that they are often dated, they probably were produced on special order. Moreover,
inventory lists of the factories and of the potters’ shops occasionally mention a so-called ‘suijgkan’ (‘suction-jug’), which refers to these vessels. The name ‘suijgkan’ hints at the secret of solving the puzzle of the jug. It was not the intention to pour or drink from it like a normal jug or tankard, as the pierced openwork on the neck of the jug makes clear. The jugs were intended as a game or a conversation piece during a dinner party. The answer of solving the puzzle is in the trick of the construction. Generally the hollow tubular rim has one functioning nozzle, and two or more ‘dummy’ nozzles issuing from a tubular rim that is connected to the hollow handle, which forms a siphon from the lower body. The suction, however, is broken by a small hole beneath the top of the handle, and the solution to the puzzle is for the drinker to place his thumb over the hole in order to create the vacuum that allows him to suck the liquid from the jug up through the handle, around the rim and out through the one functioning nozzle. 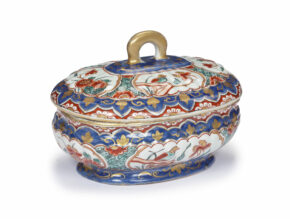