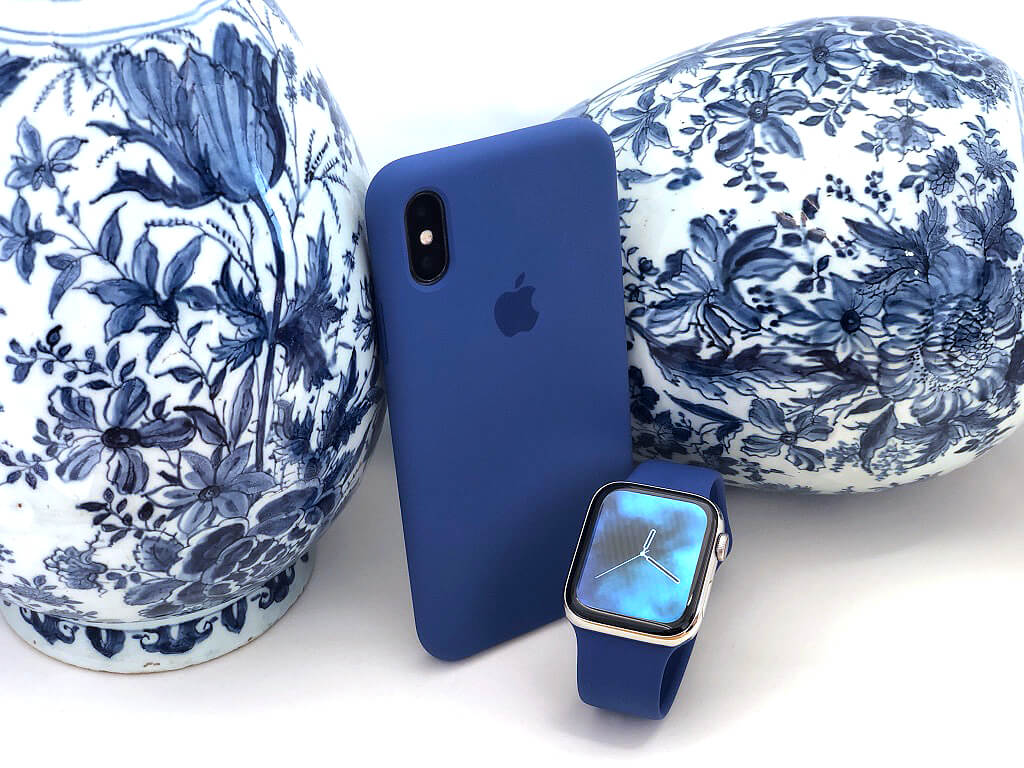 “We have long been great fans of Apple products, it is now nice to see that Apple draws inspiration from us too.”

(Link to original article on ArtDaily.com)

Last week Apple released their new iPhone cases and AppleWatch band simultaneously with the second generation AirPods. Although their product color names are generally very a-specific, like Pacific Green, Mellow Yellow, Spearmint or Midnight Blue, one color in the Spring 2019 line-up stand out.

Antiques and fine art dealers are usually very discrete about their (potential) clientele. The stories of Adele or Mick Jagger showing up at Amsterdams antiques district the ‘Spiegelkwartier’ and visiting with Aronson Antiquairs are made public through other visitors photographing these celebrities in public. Apple CEO Tim Cook visited Amsterdam in June of last year and tweeted about it himself though. He even stated “Love the rich history and creative energy of this city. Fijn om terug te zijn!” (Happy to be back).

Aronson, specialists in 17th and 18th century Delftware, have been working with Apple products since the early nineties. Robert Aronson, who is very vocal about Apple’s integration in his business, recalls buying the first computer for the company. After doing some market research, the Macintosh Classic II was bought in 1992. Coming from a ‘business on paper’, he moved the business to the digital space. “I ran ClarisWorks at first, but it was soon replaced by the AppleWorks suite. I used the word processor, the spreadsheets and the database.” Aronson was one of the early adapters of new technologies in the usually slow-to-adapt art world. Also the launch of the company website in 1995 was ahead of the pack. “Yes indeed, we met a website builder in the lobby of the Grosvenor House Hotel in London at the time that we were doing the antiques show there. I was impressed with what they were telling and I saw that it was the way of the future. So I could also easily convince my late father Dave and we had a site built, which was hosted on an English server – think of what implications that would have nowadays.” With Apple’s iWeb even that moved to an in house production until going more professional several years ago.

“Telling the world that I enjoyed Apple products was not always as straight forward as it is nowadays. I was told that I was ‘rowing against the stream’ on multiple occasions, but I simply enjoyed the ease of use and the integration of products – like the Newton PDA or the QuickTake 100 digital camera, besides the software suites.

In 2001 Aronson had caught the attention of Apple in the Netherlands and they were asked if the new Power Mac G4 Cube could be photographed in the antiques gallery. “Apple liked the contrast between old and new and the photo made it onto the cover of a Dutch Mac magazine”. We kept in touch ever since.

Now Apple has returned the favor so to speak, by naming their blue iPhone case and the AppleWatch bands in their Spring 2019 collection ‘Delft Blue.’  If you click on the lineups the Delft Blue version will come up first too. “After meeting with Hollands Prime Minister Mark Rutte several weeks ago and getting great national exposure on TV, we are now excited with the international exposure” Aronson says, but adding that he is not surprised with Apple choosing such a beautiful color.

Delftware has been a national symbol of Holland for almost 400 years. Initiated by the demand for the waning importation of Oriental porcelain from the 1640s, Delftware quickly became an iconic national product and one of the greatest Dutch achievements. From the 1680s the Delftware industry has constantly innovated with new shapes, decorations and functions. Their products were coveted by European nobility and royalty for their quality and diversity. The city of Delft rapidly became an inspiration to many European and even Oriental potters. Since 1881, over five generations of the Aronson family have brought to market the highest quality Delftware. They confidently ensure that private collectors and museum and corporate curators will discover fully researched authentic Delftware.