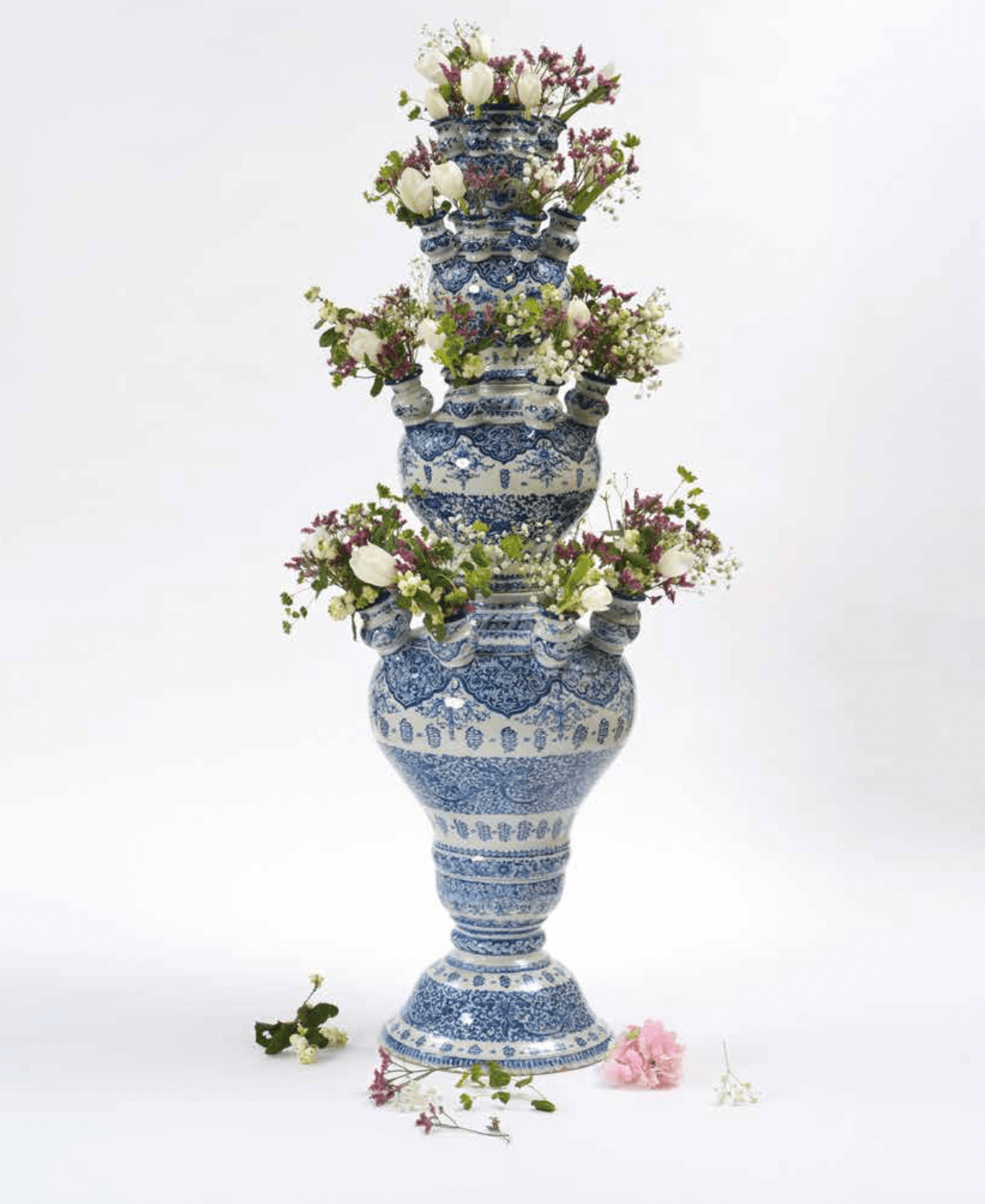 Last Friday, TEFAF – the world’s pre-eminent fair of art and antiques – has opened at the Park Avenue Armory. Ninetyfour dealers from thirteen countries are presenting the finest quality art from across the ages. Amongst them, Aronson Antiquairs brought the absolute highlight of the Dutch traders fame.

Here are five amazing pieces to not miss:

A Magnificent Blue and White Baluster-Shaped Flower Vase, circa 1695

Attributed to De Witte Ster (The White Star) factory, under the ownership of Dirck Witsenburgh from 1690 to 1704.

Contrary to the general belief, vases with spouts were not only used for tulips; all sorts of cut flowers. In the last quarter of the seventeenth century, they were made in all sorts of shapes. The multi-tiered flower vases were intended Dutch royalty and the aristocratic clientele in both Holland and Great Britain.

A Unique Blue and White Bottle Cooler with its Pair of Flasks and Covers, circa 1695

Marked LVE for Lambertus van Eenhoorn, the owner of De Metaale Pot (The Metal Pot) factory from 1691 to 1721 or his widow Margarethe Teckmann until 1724

This bottle cooler with its flasks probably derives from a silver original fashioned during the period of Louis XIV (1638-1715). To chill the wine bottles, the cooler would be filled with iced water. Due to its functional character, it is a miracle that the object has survived in such good condition.

A Lovely Pair of Polychrome Swan Tureens, circa 1765

As early as the late medieval period, a savory pie in the shape of a swan formed the showpiece of the grandest dinner tables. Although from being the highlight of a meal, the taste for these great birds changed over time, and they eventually disappeared from the menu. At the time when dining à la Française swept through Holland, these large tureens were a perfect, delicate substitute for the large bird pies.

These impressive jardinières were expensive orders, possibly commissioned by the court, the nobility or the aristocracy in Europe. They were filled with all kinds of plants or even large bouquets; depending the owner’s preference. The monarchs in Holland would have for example chosen orange trees, the symbol of the house of Orange.

A Remarkable Pair of Blue and White Chinoiserie Large Ewers, circa 1690

Attributed to Lambertus Cleffius, the owner of De Metaale Pot (The Metal Pot) factory from 1679 to 1691

This pair of ewers forms an interesting link between Italian maiolica, Nevers faience and Dutch Delftware. Although this refined shape was already known in the Netherlands in silver or pewter in the early seventeenth century, it is thought that the Delft potters adopted the shape from Nevers faience models, which in turn had borrowed their inspiration from Italy.