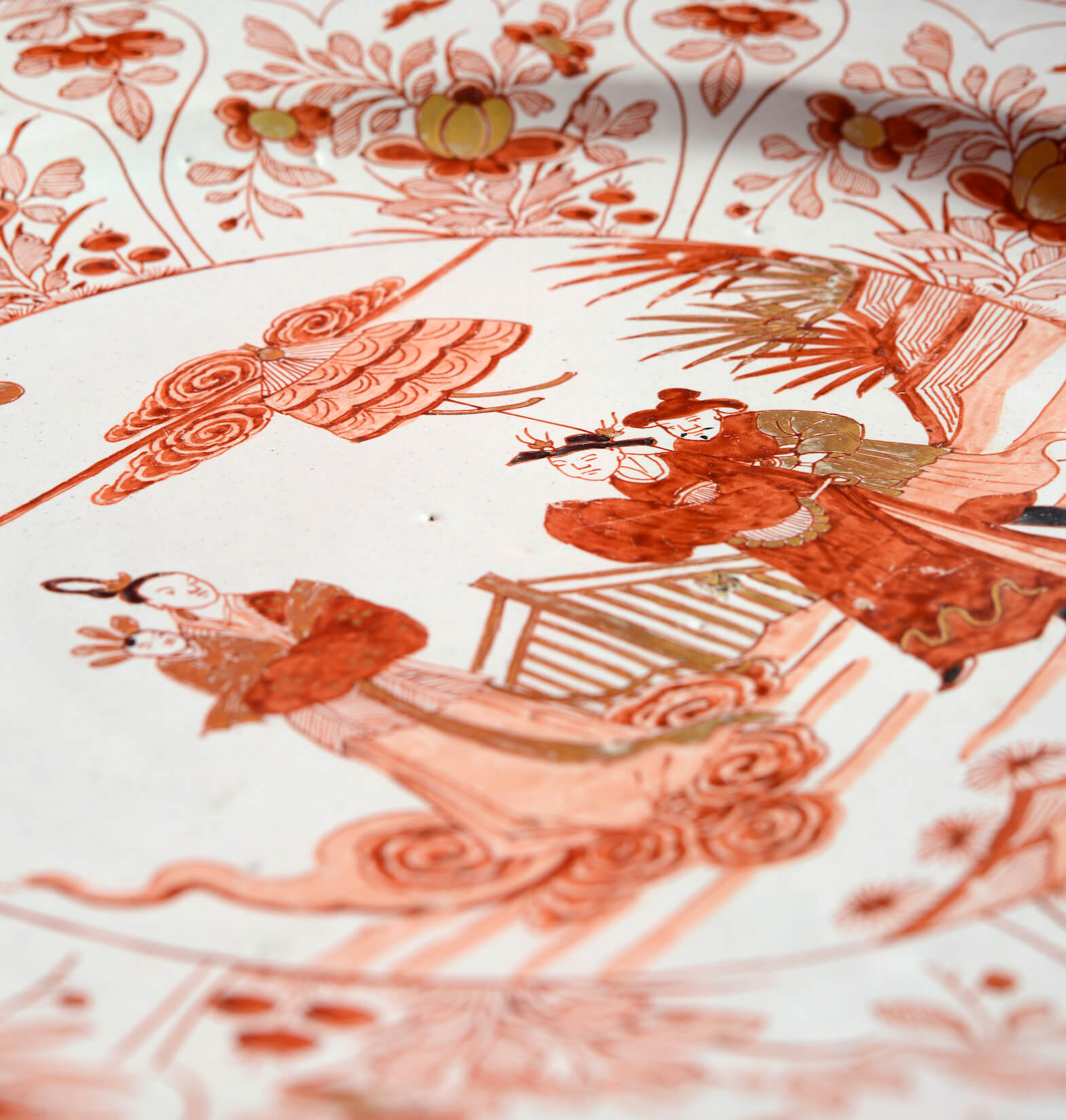 Melk en Bloed, “Milk and Blood,” is the Dutch name for a special decoration on East Asian porcelain, in which the colors iron-red and gold dominate. These porcelains were imported from East Asia for only a short period of about 30 years in the early eighteenth century. Although Chinese Milk and Blood porcelain wares are not uncommon, Delftware objects with a decoration painted only in iron-red and gold are extremely rare.

The name Milk and Blood not only describes color, but also relates to a Dutch and Low German idiom that describes “a face like milk and blood” as a fresh and healthy-looking face.[1]  Interestingly, in the eighteenth century the term was also applied to a specific type of imported Indian chintz, with predominantly red decorations on a light ground. The name Milk and Blood was not always used to describe this type of colored porcelain wares. In the beginning of the eighteenth century it was described as rood en goud (red and gold), rood en wit (red and white), or Chinees Japans (Chinese Japanese), the latter probably a reference to the Japanese Imari wares, in which underglaze blue is combined with red and gold. For this reason, red and gold decorated porcelain is sometimes considered a subgroup of Imari, while others see them as a subgroup of the Famille Verte wares. The term became probably common in the first half of the nineteenth century. In a Haarlem newspaper from 1845, a Milk and Blood porcelain service of more than 300 pieces was offered for sale.[2]

This type of porcelain was popular mainly among the Dutch, and the very few pieces that can be found elsewhere in Europe usually come from the Netherlands. The composition and iconography conform to the normal export assortment of blue and white Kangxi porcelain of circa 1700. Within the wide range of East Asian porcelain color varieties, this type of decoration is only a temporary fringe.

In the early eighteenth century, Milk and Blood porcelain was imported from East Asia in lower quantities than blue and white or Famille Verte wares. Moreover, the importation from China by Dutch traders occurred in a short period from 1700 to 1730. Since the order documents of individual dealers and private companies in the Netherlands were never archived as systematically as was customary in the transactions of the state-imposed chambers of the VOC, the identities of the clients of Milk and Blood largely remain unknown. However, the identities of several Amsterdam traders in this type of porcelain are known from the historical records of the Dresden Electoral Saxon court. For example, the trader Abraham van Theenen and the trading house Godefroy & Dulong are documented as suppliers, and the inventories of 1721-1725 state that Count Lagnasco (1659-1735), one of the purchasers of King Augustus the Strong, had acquired one of the most beautiful red and gold pieces of the Dresden Collection in 1716 on his shopping tour in Amsterdam.[3]

The objects, decorated in overglaze with iron-red and gold, were particularly appreciated in the northern Dutch provinces of Groningen and Friesland. In fact, recent research has concluded that this type of porcelain was probably produced specifically for Groningen and Friesland. The reason for this may have been the contradictory combination of normative Calvinistic self-limitation with the subtle opulence of these red-and-gold porcelains, which indicate luxury.[4]  Although both provinces were represented in the Dutch General Assembly, they did not have their own chambers in the VOC. Therefore, the objects must have come to the Netherlands via vessels of other chambers, which had their centers in Amsterdam, Middelburg, Rotterdam, Delft, Hoorn and Enkhuizen, and from there to the regions of Groningen and Friesland.[5]

In contrast to the Chinese Milk and Blood porcelain wares, Delftware objects painted with a similar style of decoration in iron-red and gold are extremely rare. This Delft polychrome and gilded large dish is probably inspired by a Chinese porcelain example. The decoration shows a Chinese man and his attendant holding an umbrella and walking towards a female figure wearing flowing robes and holding a child. The cavetto and rim are decorated with large panels of flowering plants and a flitting insect.

The woman with the child in her arms hovers on a cloud, which characterizes her as a heavenly being and may suggest her identity as the Goddess Guan Yin. An icon of mercy and passion, Guan Yin also holds a strong connection to the Chinese porcelain objects. Although Guan Yin reached enlightenment, she decided to stay on Earth, remaining a “Pu Sa.” She wanted to help humankind achieve better karma, leading them to the Western Heavens to achieve serenity and joy. Because she had the ability to comfort the sick and senile, Guan Yin was broadly admired and adored. She touched their hearts and souls, creating a sense of peace and relief amongst those who were less fortunate. Guan Yin is also often worshipped by people wanting a child and is therefore also seen as the bringer of children, hence the baby she is carrying in her arms. According to Sir Michael Butler, the woman represents Qiqiannü, the seventh daughter of the heavenly jade king, who secretly married the mortal Dong Yong in the popular Han legend “The Heavenly Wedding.” When her father learns about it, he orders her back to heaven and allows her only an annual meeting with her husband. At the first meeting, one year after her return to heaven, she brings with her the newborn son.[6]