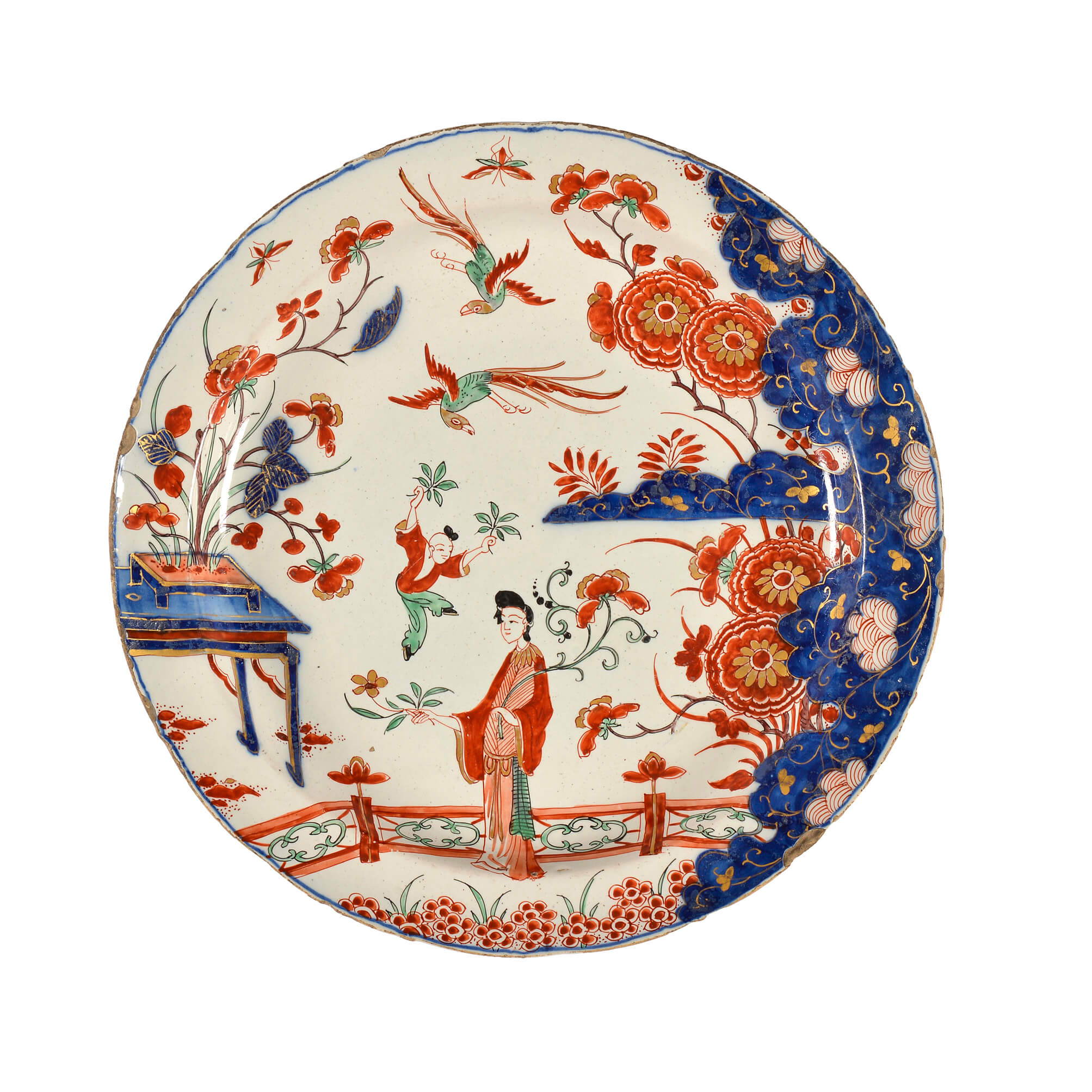 Dutch Delftware is also known by the popular term Delft Blue. The earliest Dutch Delftware was indeed only decorated in a blue colour, inspired by the Chinese Kraakporcelain which was traded by the VOC (see our newsletter of August). But this term is slightly inadequate, since Dutch Delftware is so much more extensive than only the blue and white objects. As a matter of fact, in the late seventeenth century the potters in Delft began to make earthenware that was painted in different polychrome colour patterns. They for example added red, green and even gold to their former colour scheme. What was the reason for this change of colour palette? Was the blue and white no longer appealing to their clientele?

Until circa 1645 the trade in Chinese porcelain by the Dutch East India Company (VOC) proceeded without problems, but from then on civil unrests in China brought imports of Chinese porcelain to a halt. Not only the production in Jingdezhen stagnated, but also supply routes were cut off.[1] Furthermore the Company lost their market bases, as Formosa fell into the hands of Chinese Ming adherents in 1661.[2] The directors of the VOC had recognised the impending lack of porcelain in time and began to search for alternative options in Japan.

Although since the beginning of the seventeenth century, ceramics were being made in the Japanese city Arita, the domestic Japanese demand for porcelain was much more fulfilled by imports from China. When after 1645 the supply of this porcelain also decreased strongly in Japan, there was a greater demand for the porcelain from Arita. The production there was even more stimulated when the VOC started to buy porcelain of these ovens from circa 1655.[3] The Japanese porcelain, which was bought by the VOC was at first intended for the company’s own use in Batavia or for trade in Asia and, lastly, for the home market.[4] Regarding the limited quantities they transported, it is clear that imports of porcelain from Japan could only have satisfied a small part of the demand in the Netherlands.[5]

In Arita, the potteries produced both the blue painted wares and porcelain decorated with designs on top of the glaze in brightly coloured enamels.[6] This so-called Imari porcelain was named after the port on the island of Kyushu from which the porcelain made in Arita was exported.[7] Imari was known for its rich decoration in deep blue and red with gold glazes. This was a colour combination which was not seen in China at that time. Traditional Ming dynasty porcelain was primarily decorated with the colours green and red, probably due to the scarcity of gold in China, whereas gold was abundant in Japan at that time. The depicted scenes on Imari porcelain are diverse, ranging from people to foliage and flowers. It became highly sought-after in Europe from the 1660s onwards, and it consequently fetched high prices.[8] 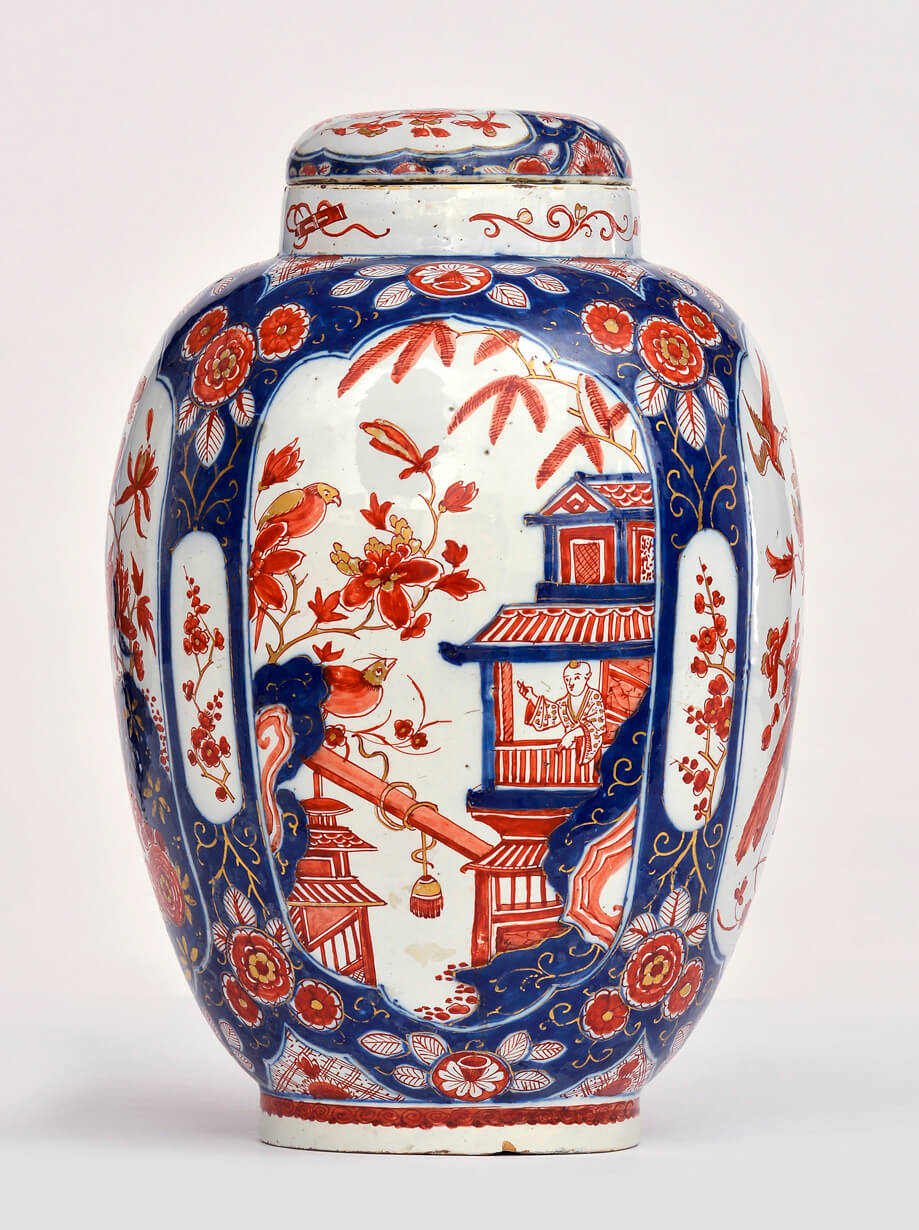 Since Imari porcelain was exceptionally popular in the Netherlands throughout the whole eighteenth century, it is consequently not surprising that the Delft potters tried to capture part of this sector of the market.[9] Especially because of its scarcity, as it was only traded for a short period by the VOC due to the high prices as compared to the Chinese porcelain.[10] Therefore, soon after the first pieces of Japanese Imari porcelain arrived in the Republic, the coloured Delftwares were developed. The Imari porcelain was an inexhaustible source of inspiration for the Delft potters and they produced a lot of faience in this style during a small period of time.[11] They used the Imari-style palette for all sorts of utensils, with which they responded to the latest fashion in the consumption of tea, coffee and chocolate.[12] Understandably, the Delftware with a polychrome decoration was far more expensive than the blue and white colour scheme.[13]

Although the Delft potters began to emulate these showpieces, they held on to their own Dutch (or the then familiar Chinese) interpretation.[14] This meant that the colours were directly inspired by the Japanese wares, but the forms and decorations were also inspired by European, mostly Dutch, objects. Typical for the Japanese decoration is the asymmetry: most pieces have a dark blue section on te right and an open scenery on the left. The open scenery is frequently decorated with a Long Eliza, an elegantly dressed oriental woman, who is often shown with playing children (zotjes) or watering a trough of plants in front of a garden fence (a detail which is derived from Chinese transitional period). Furthermore the Japanese colour palette has frequently been extended with a light green colour.

[1] Possibly the manufacture of export porcelain was then partially taken over by southern Chinese kilns that supplied previously mainly coarse porcelain. Nevertheless, deliveries were certainly not substantial and frequently enough which caused problems for the VOC since they found it increasingly difficult to meet the demand from the Netherlands.

[6] There were two types of coloured Japanese porcelain: Kakiemon and Imari.