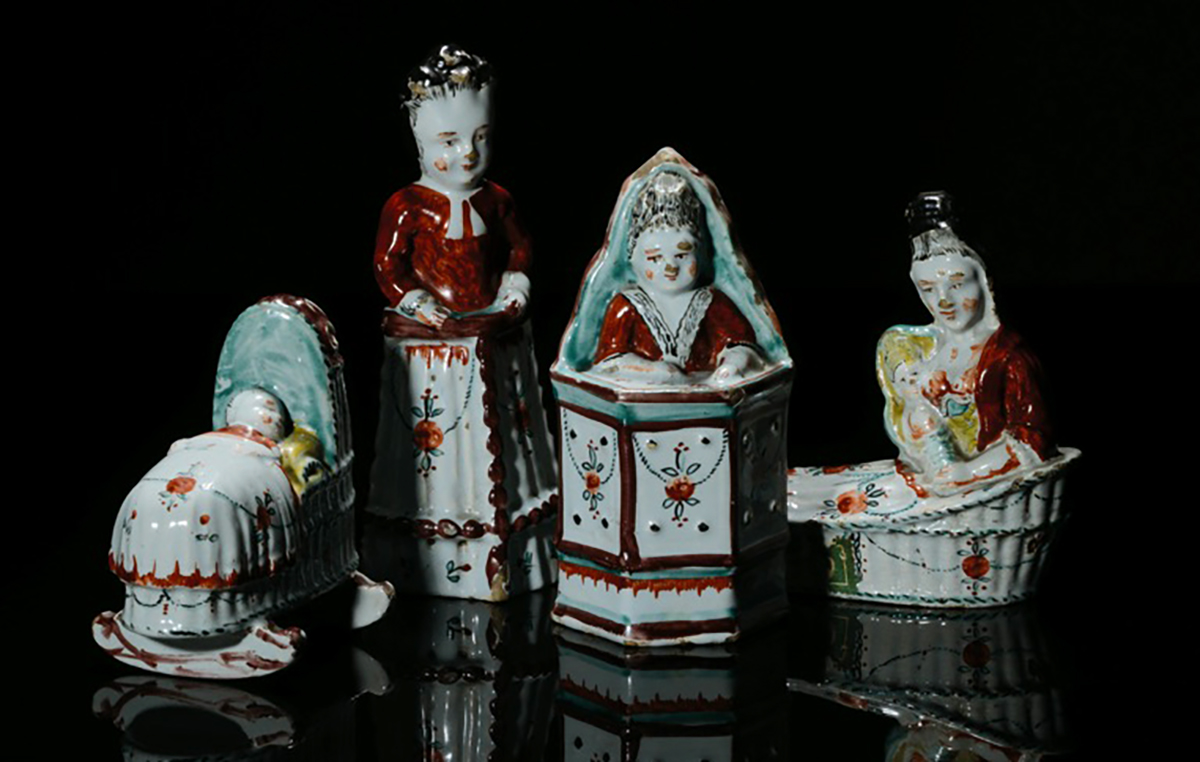 Delftware objects were commonly given as gifts to commemorate special occasions as early as the seventeenth century. During the reign of King William II and Queen Mary, Delftware objects were gifted to the nobility across Europe. The tradition continued even after the death of Mary in 1695, when King William gave many of the late Queen’s Delftware to the English nobility. Often, these objects would bear symbols of the kingdom, such as the monogram of William and Mary. The nobility and the well-to-do also offered Delftware gifts and amusements marking all kinds of special occasions both in the seventeenth century and throughout the eighteenth century.

The most common occasion to exchange Delftware gifts was a wedding. Armorial plates were often commissioned when two families were bonded in union. The plates were decorated with the two families’ coats of arms, a monogram of the married woman and man or a poem. Objects with armorial decorations became increasingly popular during the first decade of the seventeenth century. Initially reserved for the coat of arms for cities, they were now marked with the newly ascribed coats of arms of individual citizens. The families without coats of arms could order pre-decorated plates with fantasy coats of arms. The Delft factories not only received commissions for plates from Dutch families, but also from abroad.

Another suitable gift for weddings, engagements, and the birth of a child were little models of nursery furnishings, such as cradles, high chairs, and fire baskets. These miniature objects symbolized the function of marriage and the wish for progeny. The popular gifts were made by numerous Delftware factories throughout the years.

Miniature ceramic shoes sometimes bear dates and initials, and were thus probably offered as gifts on special occasions. However, these objects are sometimes unmarked, which indicates that they were for example sold at annual fairs and markets. The ceramic shoes carried romantic, erotic, and whimsical connotations that relate to the visual puns associated with shoes in contemporary Dutch painting. They may also refer to the tradition of brides receiving and wearing clogs during the wedding ceremony. The symbolism of shoes in the seventeenth century indicates that the ceramic models may have been exchanged by lovers for good luck in marriage.

The puzzle jug was another commemorative object produced by Delftware factories in the seventeenth century. This amusing and intricate gift was sometimes dated or inscribed with names. The puzzle jug was used as a tavern game or a conversation pieces during a dinner party, and was one of the oldest jokes in the Delft potters’ continually playful repertoire. One can only imagine the popularity of these objects in homes and taverns as drinkers attempted to consume the contents without causing a spill. After a long and alcohol-induced evening, it became an increasing challenge. The pierced openwork on the neck of the jug intentionally prevented any liquid in the body from being poured or consumed, and provided rounds of hilarity when the uninitiated attempted to drink from the vessel. Additional holes that were cleverly concealed made the challenge even more confounding.

As the above makes clear, particular Delftware objects were commissioned and gifted for many different celebrations in the seventeenth and eighteenth centuries. And not only then, today these special objects still make the perfect gift on certain occasions.