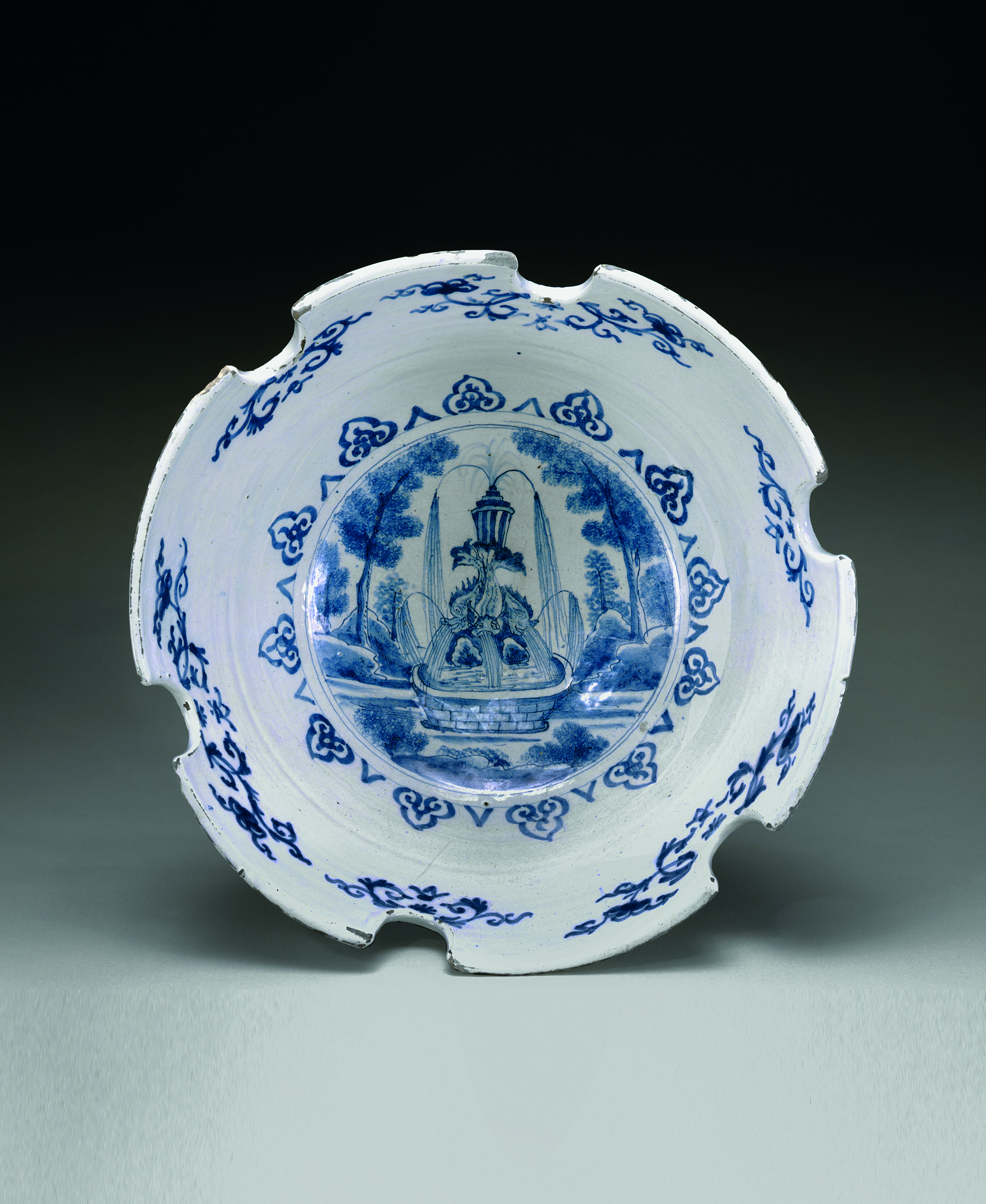 This odd-looking Dutch Delftware form is called a “monteith.” Monteiths were large bowls with scalloped rims that allowed wineglasses to suspend in chilled water. Their first appearance in 1683 is described by Oxford diarist Anthony à Wood (1632-1695), who wrote: “This yeare in the summer time came up a vessel or bason notched at the brims to let drinking glasses hang there by the foot so that the body or drinking place might hang in the water to coole them. Such a bason was called a ‘Monteigh’ from a fantastical Scot called ‘Monsieur Monteigh,’ who at that time or a little before wore the bottome of his cloake or coate so notched UUUU.” The earliest surviving monteiths date from 1684, a year after Wood’s description. This new form became popular in the late 17th century, and examples in silver, base metals, glass, pottery, and porcelain continued to be produced throughout the 18th century.

The dining style known as service à la française or the “French ease,” promoted the practice of the guests serving themselves – creating a sense of informality and intimacy. Dishes for each course were arranged on the table according to a carefully conceived plan. Servants delivered and removed each course, provided drinks and condiments from the side table, in addition to clean plates and cutlery. This type of dining demanded a large inventory of glassware, dishes, and flatware. Monteiths not only were used for chilling wineglasses, but also proved useful for quickly rinsing out wineglasses between courses.

This rare Dutch Delftware monteith is painted in blue with detailed scenes of drunken revelers and fantastical fountains (Additional images of this monteith can be found here). On one side a group of bacchanalian boys cavort and drink from a spouting wineglass presumably issuing an alcoholic beverage. A second scene features a man and woman flanking a large three-tiered fountain. The third view depicts a spraying fountain composed of three dolphins with a circular shell at the top. In the well is a large three-tiered fountain with a base of dolphins with a baroque lappet border and scrollwork. The depiction of boys or cupids dancing with wineglasses and watery fountains with dolphins were frequent decorative motifs applied to Dutch Delftware vessels for the service of wine or other spiritous beverages. This type of decoration is also encountered on garden urns and tulip vases. Although the Historic Deerfield monteith doesn’t have a factory mark, it closely relates to a monteith (64.3.3) made by Lambertus van Eenhorn of The Metal Pot Factory (De Metaale Pot), ca. 1680, at the Brooklyn Museum of Art and a bottle cooler with pair of flasks and covers (2017.9) made by the same factory, c. 1695, now in the collection of the Wadsworth Atheneum.

Ultimately the fashion for monteiths died out at the end of the 18th century, replaced by wine glass rinsers shared between two diners. This fanciful and eye-catching form lives on and continues to perpetuate the name of that fantastical Scot, Monsieur Monteigh.