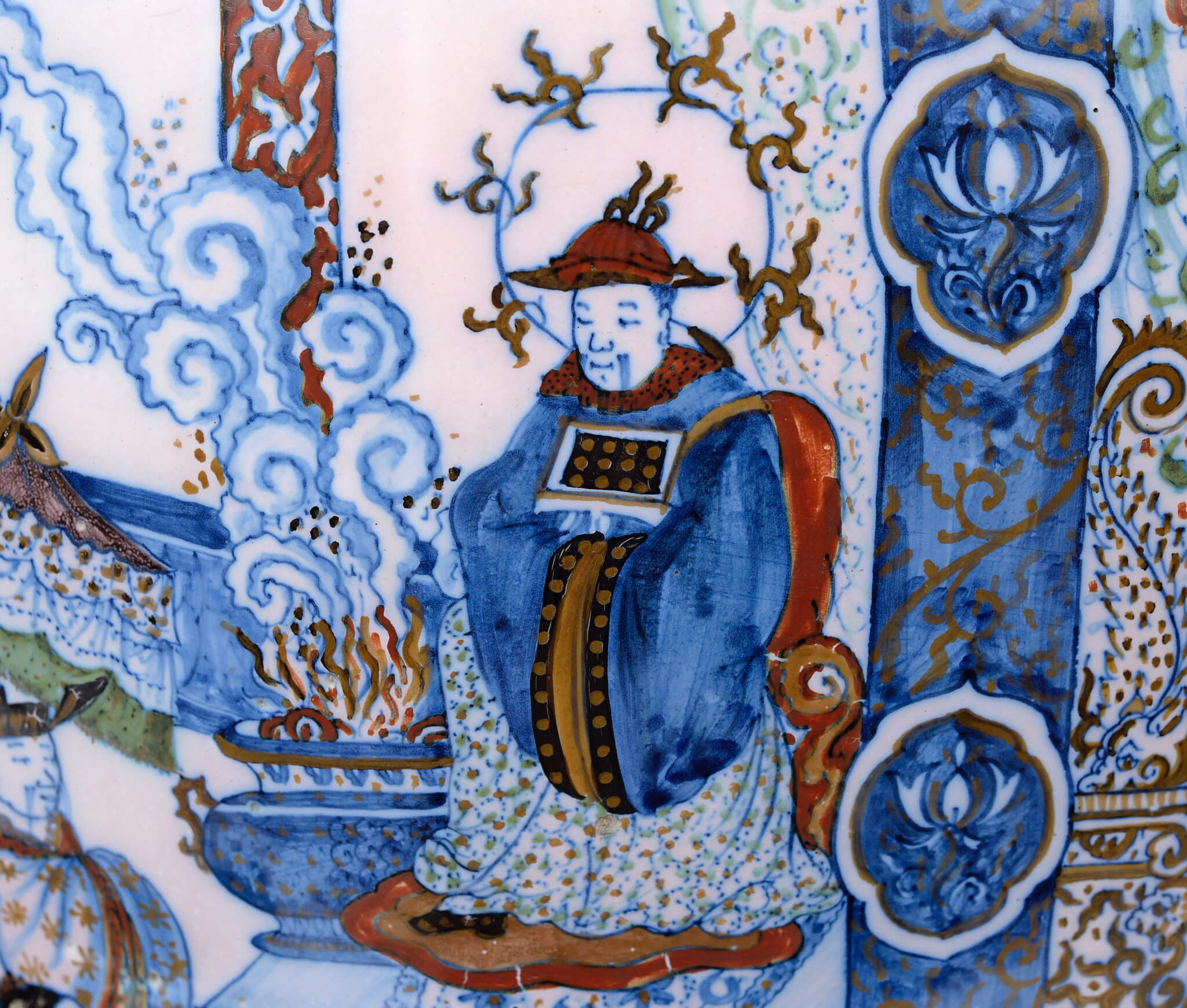 The Dutch East India Company (VOC) imported tens of millions of pieces of porcelain during the two centuries of its existence (1602-1799) and flooded the country with Chinese and Japanese tablewares. The decoration on these exotic porcelains gave a glimpse of a far away culture that many could never visit; it took almost a year to reach by ship. Viewers were dazzled by the depictions of dragons, phoenixes and fierce lions dwelling among large flowering plants and in mountainous landscapes. Tall, slender ladies strolled in fenced gardens, accompanied by small dancing boys. Scholars meditated in the wilderness, and warriors on horseback were engaged in battles. Bamboo and pine surrounded heathen temples and pagodas built on rocky promontories.

One can only imagine how enthralled the Dutch consumers must have been with the ceramics, but also the textiles, furniture, and paintings that had traveled such distances to reach their homes. They brought new colors, textures and patterns to their interiors, that were otherwise quite monochromatic and spare.[1]

Information about the Far East was also exchanged by word of mouth from mariners and merchants, through private correspondence, in printed newspapers and maps. Publishers in Amsterdam were far less restricted than their counterparts in most other European countries, and this freedom contributed to the city’s primacy as a center for new ideas and information about the non-European world.[2]  One such publisher was the Blaeu family, known throughout the Netherlands and beyond for their printed maps, charts, atlases and geographical and cultural volumes.[3]  The business first began with the cartographer Willem Blaeu (1570-1630), who produced and published several country maps. He then became the map-maker of the Dutch East India Company. Willem had two sons, Joan (1596-1673) and Cornelis (circa 1610-1642), who continued their father’s mapmaking and publishing business after his death in 1638.

Travelogues also played an important role in the distribution of exotic imageries. These books, which were not only published in Dutch but often in English, French and Latin, shaped European impressions of Asia and heightened the demand for all things Asian.[4]  One of the first, and most important travel accounts was of Johan Nieuhof, who joined the VOC on the first Dutch trade mission to China from 1655 to 1657. Although the mission’s main task of advocating trade privileges was not achieved, Nieuhof’s publication chronicling the experience was a great success.[5]  The first edition, named Het Gezandtschap der Neêrlandtsche Oost-Indische Compagnie, aan den grooten Tartarischen Cham, den tegenwoordigen Keizer van China: Waarin de gedenkwaerdigste Geschiedenissen, die onder het reizen door de Sineesche landtschappen, Quantung, Kiangsi, Nanking, Xantung en Peking, en aan het Keizerlijke Hof te Peking, sedert den jaren 1655 tot 1657 zijn voorgevallen, op het bondigste verhandelt worden. Beneffens een Naukeurige Beschrijvinge der Sineesche Steden, Dorpen, Regeering, Weetenschappen, Hantwerken, Zeden, Godsdiensten, Gebouwen, Drachten, Schepen, Bergen, Gewassen, Dieren, et cetera en oorlogen tegen de Tartar : verçiert men over de 150 afbeeltsels, na’t leven in Sina getekent, was published in 1665 in Amsterdam by bookseller and art dealer Jacob van Meurs. It provides both an overview of the Dutch embassy and a description of China. It is not difficult to understand the success of Nieuhof’s book because it not only presented European readers with the most detailed and comprehensive description of China at the time, but also enabled them to visualize it through vivid illustrations. Although the illustrations were allegedly drawn from life, they were in fact embellished by print makers in the studio of publisher Van Meurs.[6]  The travelogue was reprinted several times and translated into other European languages during the 17th and 18th centuries. In this way Nieuhof’s book became one of the most important European sources of information about China and East Asia.[7]

Another influential publication on China was written by Olfert Dapper, who in contrast to Nieuhof never actually traveled to the country. The publication Gedenkwaerdig bedryf der Nederlandsche Oost-Indische Maetschappye, op de kuste en in het Keizerrijk van Taising of Sina: behelzende het 2e gezandschap aen den Onder-Koning Singlamong … Vervolgt met een verhael van het voorgevallen des jaers 1663 en 1664 op de kuste van Sina … en het 3e gezandschap aan Konchy, Tartarsche Keizer van Sina en Oost Tartarye … beneffens een beschryving van geheel Sina, published by Jacob van Meurs in 1670, describes the expeditions of the Dutch admiral Balthasar Bord along the coast of Fujian and the embassy of Pieter van Hoorn to Beijing.[8]  In addition to these reports, Dapper also included a detailed description of Chinese culture and society, often based on Jesuit material. Moreover, his work was lavishly illustrated with prints on a wide variety of subjects, including plants, traditional headwear and Chinese weapons. The illustrations are based on a manuscript by the Spanish Jesuit Adriano de Las Cortes, which is currently kept in the British Library, showing just how far the medium traveled. The manuscript must have come to Europe between 1625 and 1670 and ended up in the hands of the Amsterdam publisher Jacob van Meurs, who took over the material and adapted it specifically for the European public.[9]

The influence of these prints does not end with these Dutch publications, because both Nieuhof’s and Dapper’s books inspired the chinoiserie style that proliferated in the decorative arts, and particularly in Dutch Delftware.[10]  This European style of decoration, in which Chinese figures, landscapes, architecture and attributes are imitated, or evoked, originated in the seventeenth century and quickly became a dominant fashion throughout Europe, enduring the first half of the eighteenth century. Although the prints in both Nieuhof’s and Dapper’s publications offered substantive inspiration for this later decorative art, they can also be regarded as a form of chinoiserie, since the elements in the illustrations are rendered and composed in a European way.[11]

In the Republic, the Delftware painters often appropriated Chinese imagery and symbols, which appealed to European clients seeking objects with Oriental flair. Besides the Chinese porcelain wares, prints were also an important inspiration. Some decorations found on Delftware objects were based on illustrations from Nieuhof’s Gezandtschap and Dapper’s Gedenkwaerdig bedryf, although other seventeenth-century books about China may have also been used. In addition, Delftware painters also referenced simple woodblock prints, however these inexpensive, high volume copies are rarely preserved.[12]

To paint these Chinese imageries, Delftware painters used so-called ‘sponsen’ (stencils), which were perforated paper templates that were used to sketch an image with charcoal powder on the faience. The charcoal sketch, which would burn off in the kiln, acted as a guideline for applying the detailed image with pigments such as cobalt and also gave the series a standardized appearance. The stencils could also be used to create different representations by omitting or adding elements.[13]