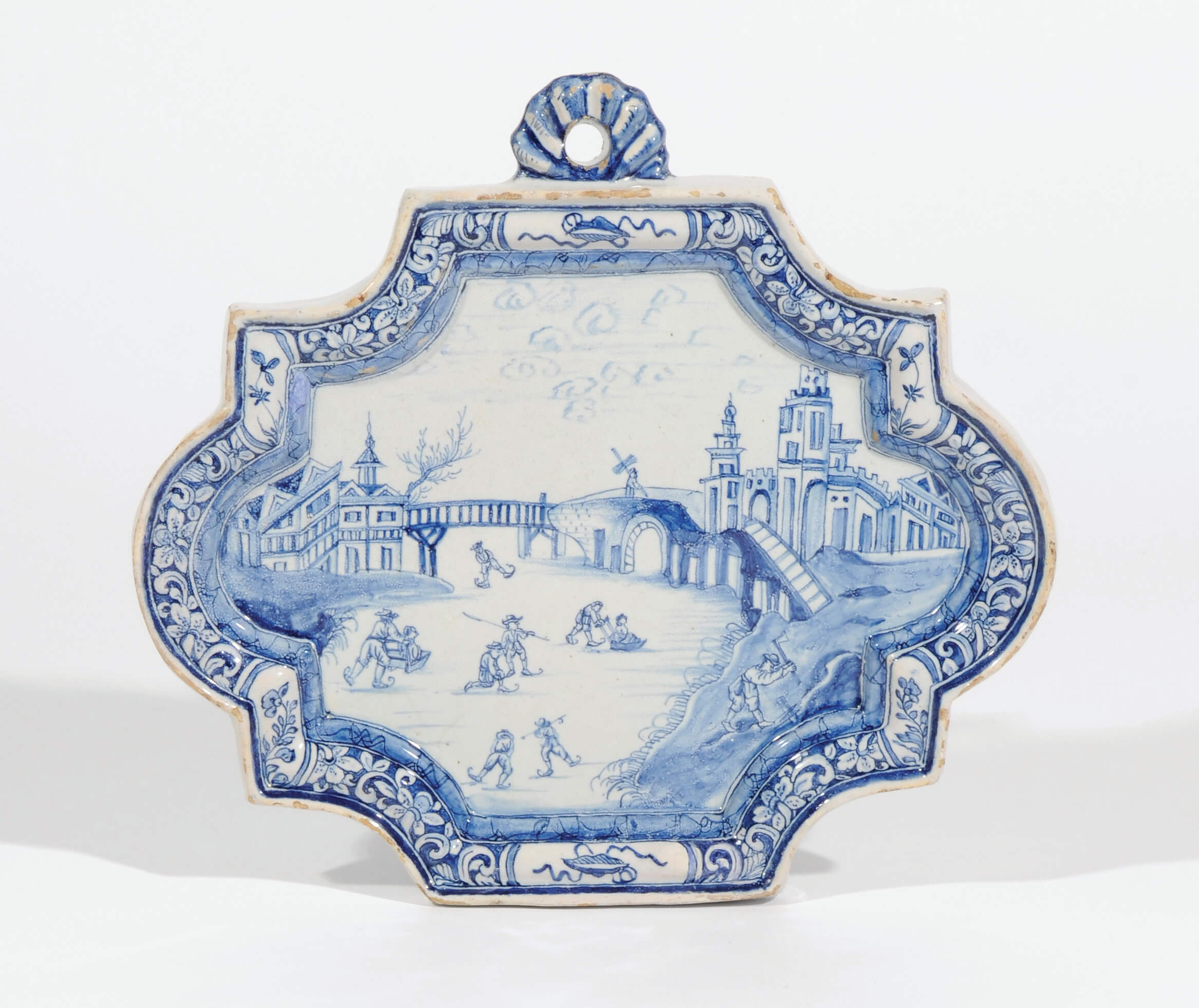 Who can think of a thing that is more Dutch than people skating on the ice? December is also known as the first winter month, although lately there were no harsh winters during this month in the Netherlands. This has not always been the case, since there was a Little Ice Age which lasted from the fifteenth to the nineteenth century. This brought colder winters to parts of Europe and North America, which caused that canals and rivers in the Netherlands were frequently frozen to support ice skating and winter festivals.[1]

During the winter season of 2015-2016, the exhibition Real Winters was on view in Teylers Museum in Haarlem, which referred to the former harsh winter in the Netherlands. Especially in nineteenth-century paintings winter landscapes are depicted. The exhibition took one on a journey from the Dutch Romanticism through the Dutch impressionism of the Hague School and the Amsterdam impressionists to the beginnings of abstract art. For example, think of the winter landscapes of Andreas Schelfhout (1787 – 1870) in which he depicted a frozen canal or lake with bare trees and pairs skating or with sleighs, decorated with a windmill, a farm, or a koek-en-zopie (refreshment stall) with a Dutch flag.

These nineteenth-century paintings originated from the nostalgic longing for the glorious art of the seventeenth century. The seventeenth-century winter landscapes show for the first time the joy on the ice. Especially landscape painter Hendrick Avercamp (1585 – 1634) is known for his paintings which feature people ice skating on frozen lakes. The Rijksmuseum’s Winter Landscape with Ice Skaters, dated ca. 1608, shows all kinds of entertainment on the ice: not only people are skating, but also playing ice hockey and with horses pulling sleighs on the ice. That there was also a downside shows the left foreground in which crows and a dog feast on the carcass of a horse that has frozen to death.[2] Floods, icebound ships and unemployment caused by prolonged frost caused much suffering, but it was also the beginning of the Dutch ice skating culture.

Besides the Dutch painters, who portrayed the wintry scenes, the potters in Delft also chose this wintry subject for their earthenwares. Just like the painters, they produced paintings made of earthenware, the so-called plaques. Dutch Delftware plaques were used as framed or unframed wall decoration, just as if they were paintings on panel, canvas or copper. The Delft painters frequently copied prints and other works of art. This was not just simple a way of paying homage; it was a normal practice, which reflected and determined styles and tastes and was therefore both instructive and inspirational. From the vast range of available prints: individual images or plates selected from illustrated books or model books, the Delft painters took their sources for the decoration of all manner of wares, but particularly for the ‘canvases’ provided by the flat surfaces of the plaques. Contemporary fashion was no limitation, and in the second half of the eighteenth century, when the plaque production flourished, it seems surprising to see that early seventeenth-century prints were still used as decorative sources.[3] This possibly relates to the fact that prints were available decades or centuries after their initial creation due to the frequent copying and reworking of the copperplates.[4] A print could have indeed been the inspirational source for this blue and white winter scene plaque, dated circa 1750. Interesting is the fact that the frame of this plaque is not made of wood, but molded with an inner ‘cracked-ice’ border within a wider blue-ground border of blossoms and foliate scrolls interrupted by panels of beribboned Chinese artemisia leafs and oriental flowers. Just like the paintings, the plaque also combines the seasonal pleasures with the harsh realities of everyday life in winter, exemplified by the figure chopping wood in the foreground. 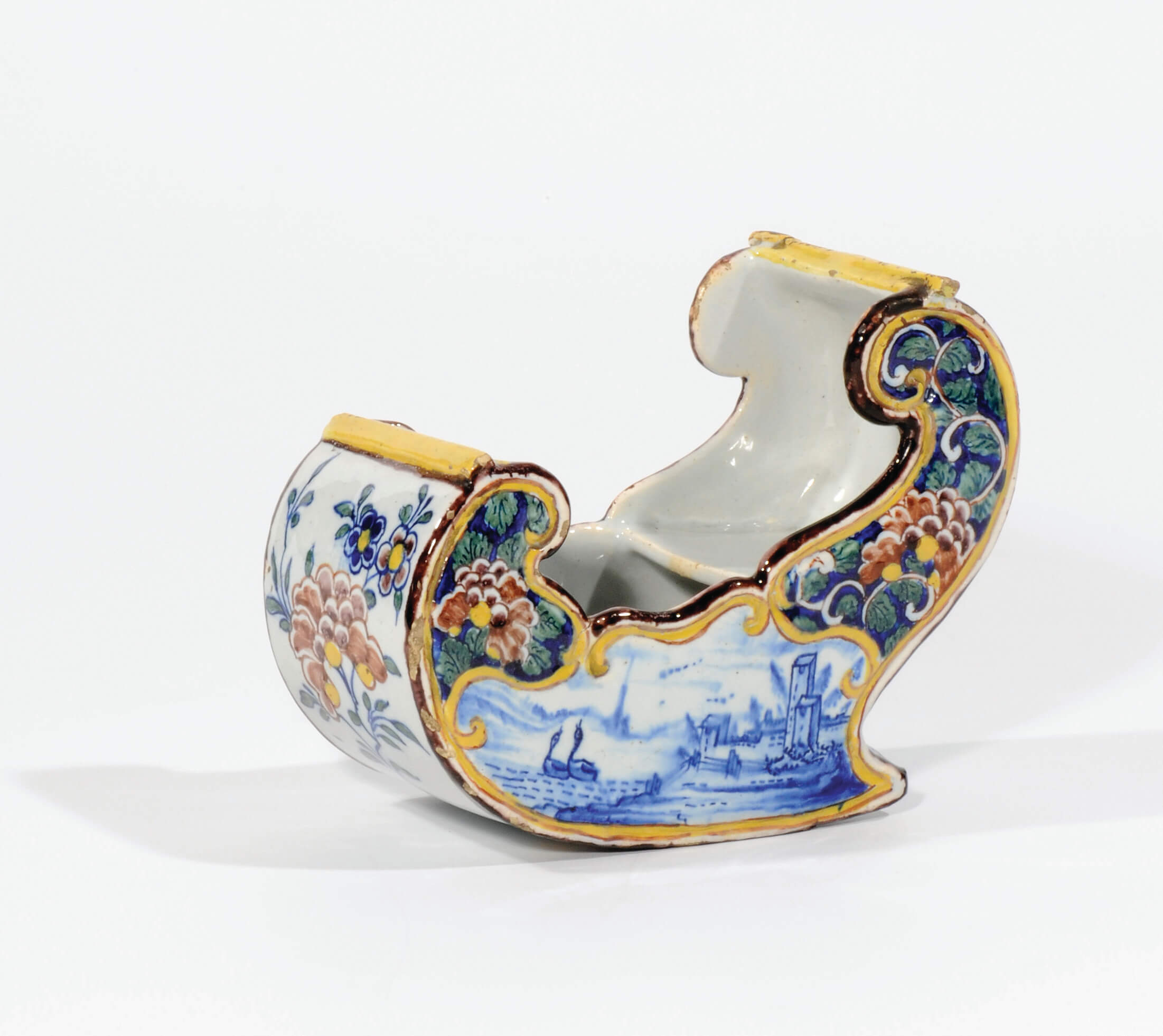 Besides these pottery paintings which merely served as a decoration on the wall, the potters in Delft also made a variety of objects with a winter theme. One of the most famous is probably the small earthenware sleighs. Delfts sleighs of this type are modeled in the shape of an ice sleigh of the type that provided a lady with a comfortable pleasure ride on the ice, while propelled by a skating gentleman. An example of this shape can be seen on a penny print by A. Robyn, Zaltbommel in the Rijksmuseum, Amsterdam. The accompanying Dutch text refers to the pleasure on the ice: ‘It’s January with air crisply freezing; But one seeks a measure of pleasure on te ice; With rides in the ice sleigh and skating, so pleasing; To ladies, who find them diverting and nice.’[5] Although blue and white Delftware models sleigh were being made by the early eighteenth centuries, this type with its colourful patterns is dated stylistically to the second half of the eighteenth century. It is painted on either side in blue with a river scene, one depicting a man leaning over two buckets in front of a ship and distant houses, the other with two ducks swimming near Italianate towers on the near bank. The high back, decorated with a flowering peony branch, is painted in a pale blue ‘cracked-ice’ pattern. Delft sleighs of this type often have been referred to as pipe stands. However, Delft sleighs probably served as decorative objects and not as pipe stands, as is often suggested, since pipe stands in Dutch porcelain of circa 1780 have indentations on the front to support the pipe stem, whereas their Delft counterparts do not.[6] 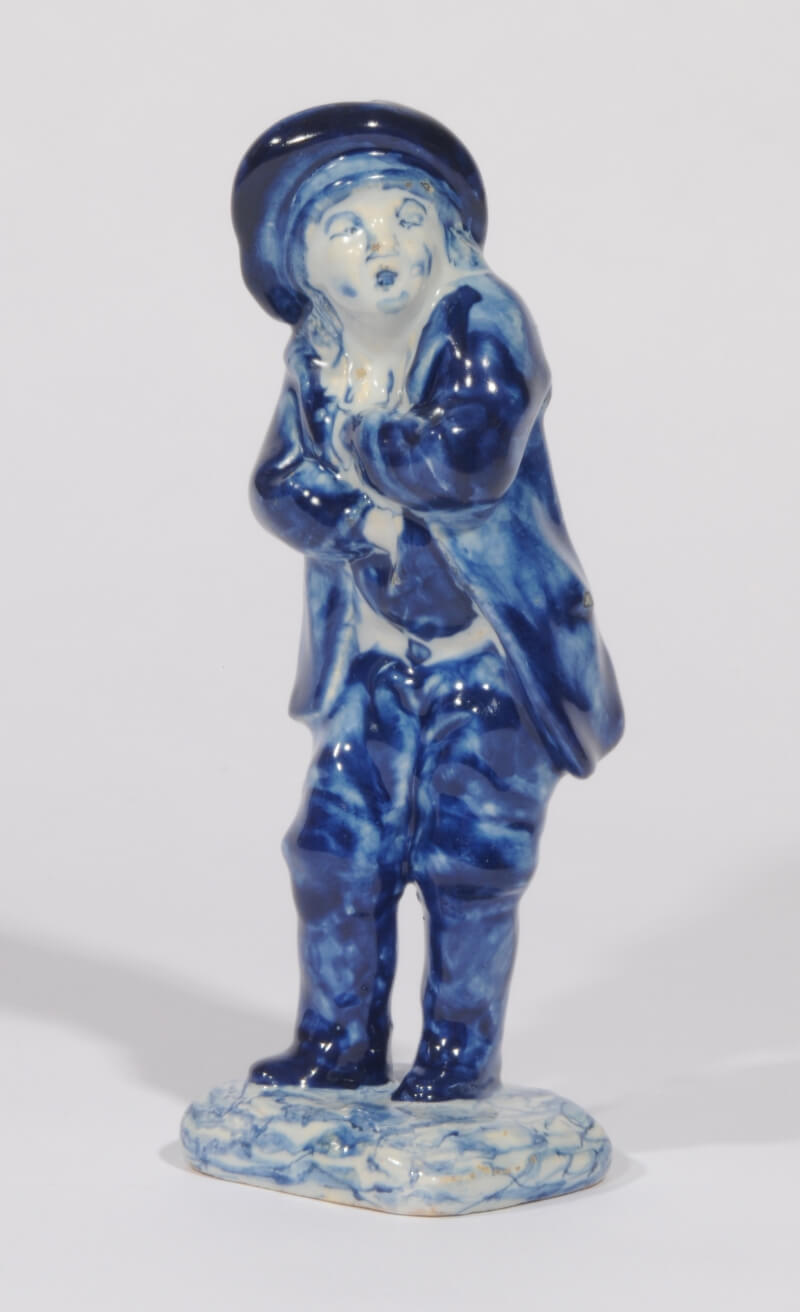 Furthermore the Delft potters made emblematic figures of Winter, such as this blue and white example. The youth, wearing a soft hat, an open jacket and baggy breeches, has his hands tucked into his waistcoat to protect himself against the cold. This model traditionally has been attributed to Paul-Louis Cyfflé (1724-1806), a modeler who by 1766 was employed at the Lunéville factory in France. A number of his models were made not only in faience and ‘Terre de Lorraine’ (pipe clay), but served as the inspiration for English counterparts made in porcelain at the Chelsea and Derby factories, and in Staffordshire earthenware.[7] Interesting is that the figure concerns a youth and not a wrinkled old man, with hoary hair and beard, wrapped against the cold, which is usually the personification of Winter.[8]

Previous examples show clearly the interest of the Delft potters in the wintry theme and the many varieties that were conducted. Plaques, sleighs and emblematic figures; the potters produced it all. It is wonderful to see how these typical Dutch sceneries, with both the depiction of the pleasures and the hard reality during the real winters, are adapted to this typical Dutch product: Dutch Delftware.