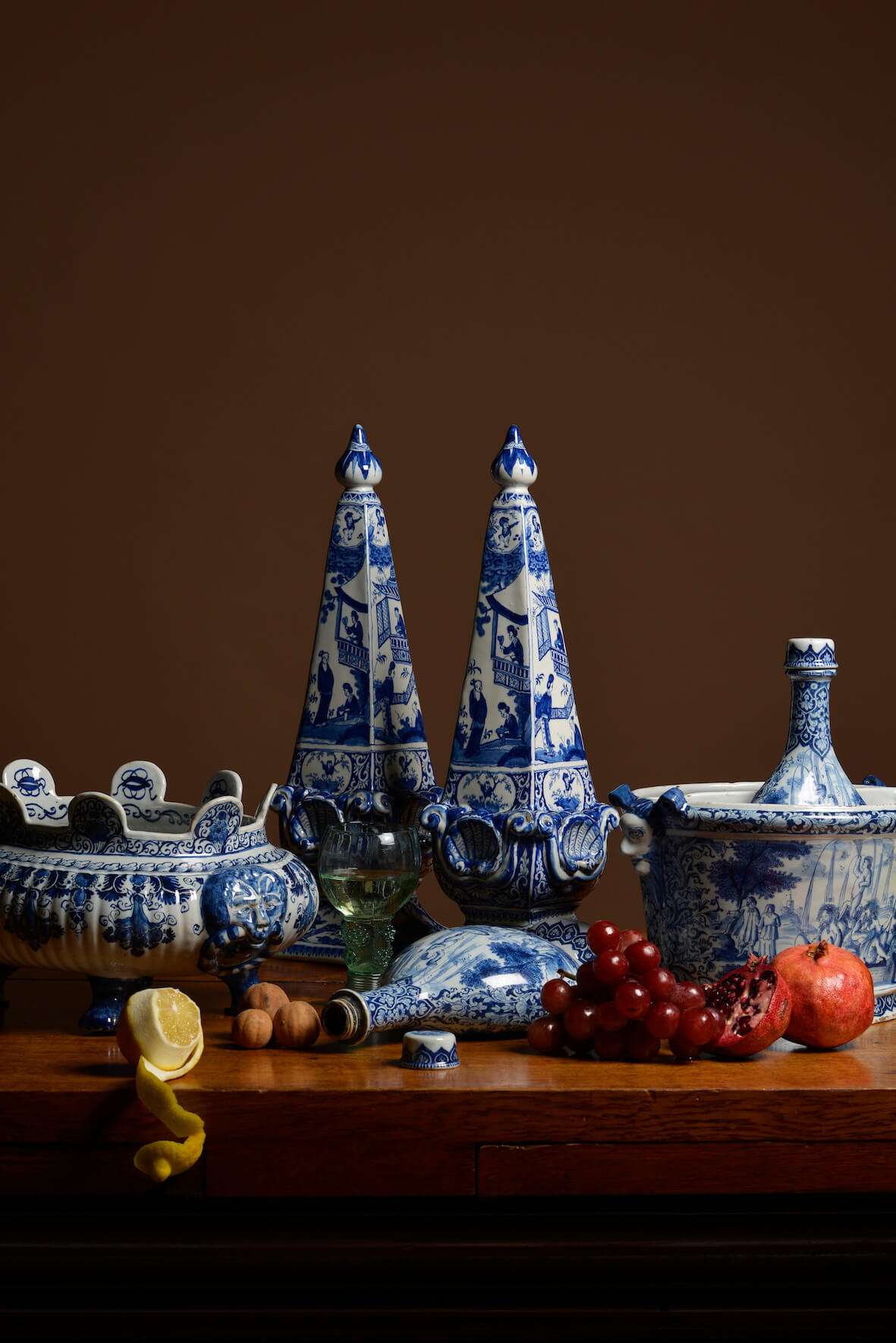 Dining has a history of its own. From the fifteenth century onwards, a formal meal became increasingly divided into different courses. The meal began with a course of cold foods served from the buffet or sideboard, followed by hot dishes from the kitchen: roasts, pastries and soup. The meal would end with what would eventually become our dessert, a course of preserved fruits, sweets, such as marzipan, and biscuits.[1]

Although the meal itself gained in structure, it took time before the table setting would become more uniform and organized. The earlier paintings of the seventeenth century often show families, guild members or other groups gathered around the table for a meal. The different dishes and beverages would be served in an assortment of vessels made of a variety of materials: stoneware jugs, pewter or silver plates, wooden trenchers, earthenware bowls and glasses of many shapes. Utensils were sparse, except for wooden or metal spoons, or carving knives and large two tined forks of a size suitable only for serving. The food was set in the middle of the table, the guests helped themselves, and then ate crudely with their hands or sometimes with a piece of bread. It was not until the end of the seventeenth century that smaller forks were introduced and dinner guests were not required to eat with their fingers.[2] The appearance and use of three- and four-tined forks not only improved civility and table manners, but hastened the decline of pieces such as ewers and basins, which lost their function at the table when rinsing hands between courses was no longer necessary.

In the second half of the seventeenth century, the French influence spread throughout Europe, where French was adopted as the language of conversation and literature in elegant circles, and French taste dominated costume and fashion, architecture, gardening and comportment as well. When Louis XIV (1638-1715) assumed the throne in 1661, his ambition was to establish a position of dominance not just in France,but in Europe as a whole, by using style and taste through supremacy in the decorative arts and in visible royal refinement. During meals and banquets the grandeur of the French court was displayed in the largest dinner services ever beheld, this splendor set the standard for the royalty of Europe.[3] As the taste for French excess expanded throughout the Continent and across the Channel, services in Chinese porcelain and in local faience, such as the large Dutch Delft service of Wenzel Ferdinand, Prince Lobkowicz of Bilina (1656-1697), were commissioned.[4] 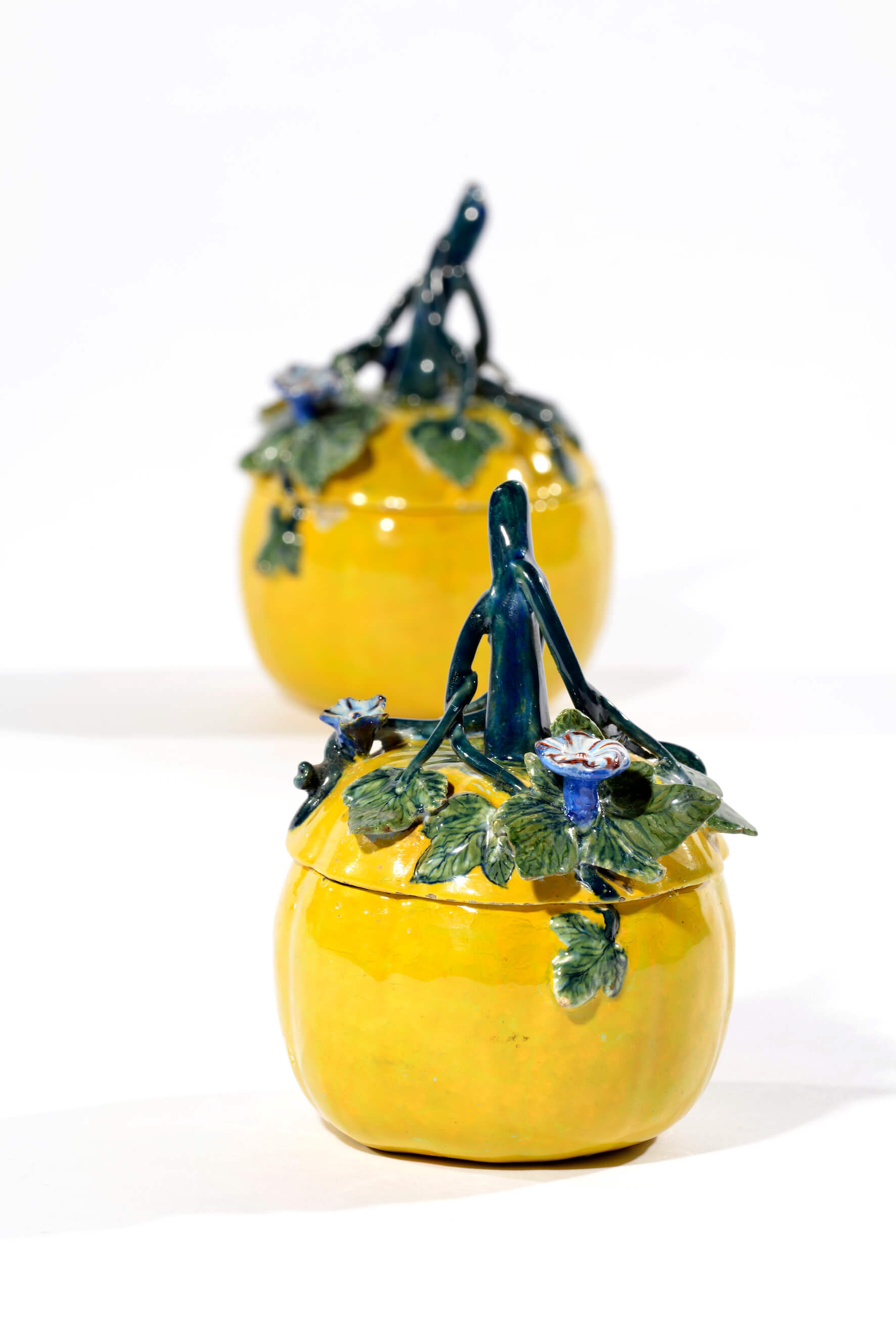 From France, often via the Huguenots, many of whom migrated north, exiled by the revocation of the Edict of Nantes in 1685, francophilia traveled to the Netherlands and England and was promoted there through the tastes of William III and Mary II, to whom it had been introduced by their close association with the Huguenot architect and engraver Daniel Marot (1761-1752). The Delft potters were among the beneficiaries of this “new” Louis XIV late baroque taste, and they found themselves with orders for services comprising not only the familiar forms: plates, dishes and bowls, which had dominated their earliest repertoire, but now comprising those forms in various sizes and of matching shapes and decoration, as well as the newly desired objects such as salt cellars, spice boxes, sugar and spice casters, butter tubs, candlesticks and other forms found previously only in metal: silver, pewter or brass. A lavish display of Dutch Delftware on the sideboards and dinner tables of the grandest Dutch and English houses easily could have rivaled the splendor of the royal French silver, which by 1689 had almost all disappeared into the melting pot during the first conscription for Louis XIV’s war-depleted treasury. In the seventeenth century, the objects used at the dinner table were often displayed on a side table or buffet, and were presented to the seated guests by a servant.[5] A banquet was not just a gastronomic feast; it also was a feast for the senses, and the emphasis lay on display, presenting the food in an elaborate way.

The inventories of William and Mary list many decorative objects whose singular purpose was to demonstrate the monarchs’ wealth and taste. With respect to royalty, separate buffets often were decorated with objects for display and for use; Delftware and silver were combined on side tables, elevating the faience to the level of silver.[6] It should be observed, however, that buffets for the display of wealth were not just the privilege of the courts of Europe. The untitled well-to-do also had buffets and displays in their dining rooms. 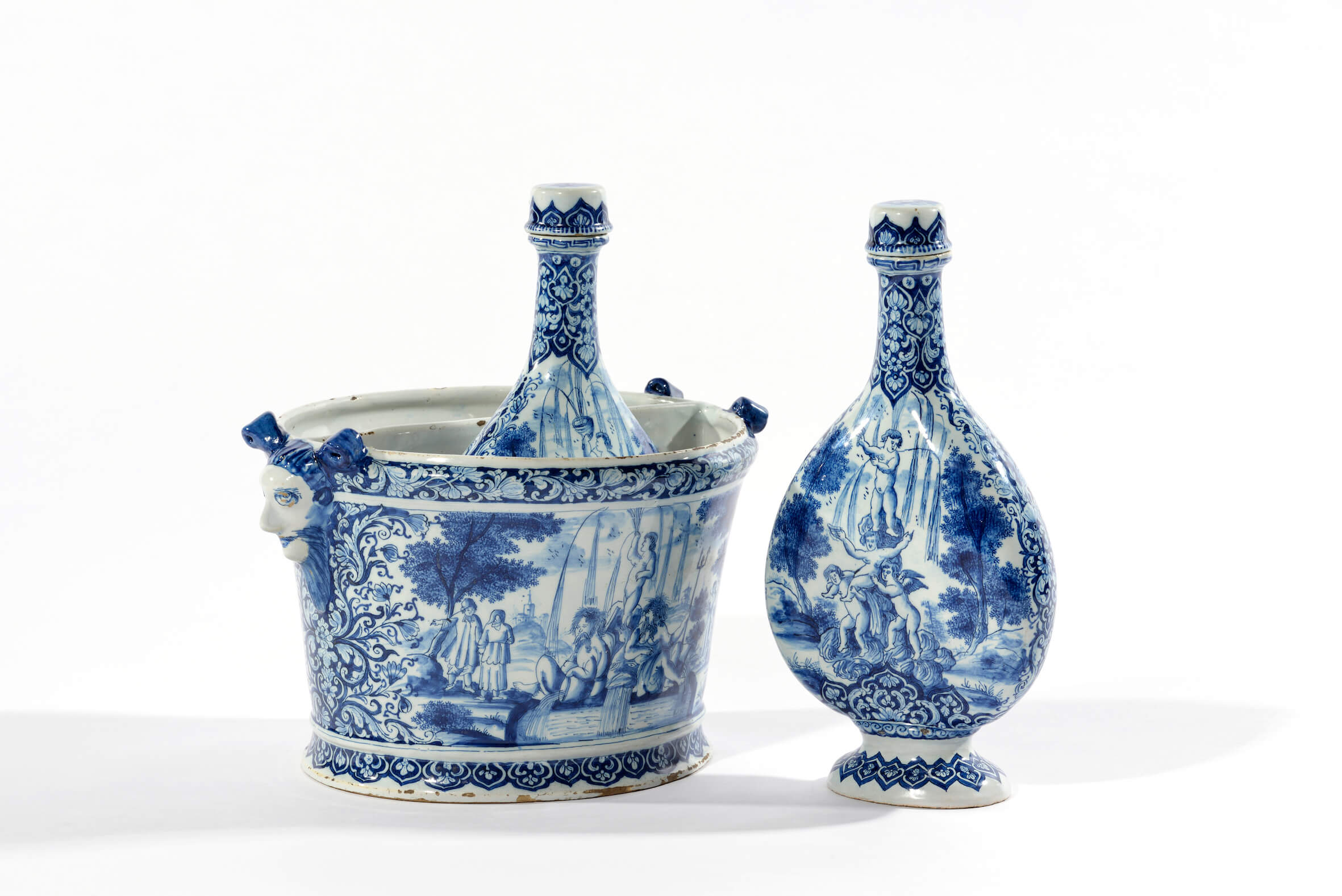 During the eighteenth century, the buffet changed both in appearance and function. The practical Dutch, fond of convertible furniture, developed buffets either built into the paneling of a room, sometimes even with cabinet doors, or as a foldable furniture, concealing its true function. When the top of a foldable buffet was opened, it revealed little shelves for glasses and a recess serving as a basin, sometimes with a place for a fountain. During a dinner, when a buffet was equipped with a fountain, a servant could remove the empty wine glasses from the table, rinse and dry them at the buffet, and then refill and return them to the table. The wines would be chilled in ice-filled wine coolers, and when desirable, the wine glasses also were chilled in monteiths. When chilling was unnecessary, and during less formal occasions, the wines could be served from figural cisterns, which also might have been placed on the buffet.

As the eighteenth century progressed and the forms and quantity of vessels, utensils and cutlery, plates, linens and even table decorations expanded to accommodate the changes in the art and customs of dining, the buffet also adapted, and began to serve as a place for storage of the additional equipment when not in use on the table. During the meal, the buffets and sideboards were used as working surfaces on which to carve platters of meats, and for the placement of cold dishes, condiments, salads, bread and pastries before they were served. But even as its form was adapted over the years, the buffet never lost its original function for the display of beautiful objects – and in the Netherlands the most beautiful of those objects surely were Dutch Delftware.

[4]  With its 150 remaining pieces it is difficult to imagine the original size of the Lobkowicz service when it was ordered circa 1685 from Lambertus Cleffius, the owner of De Metaale Pot (The Metal Pot) factory, but it is the largest surviving Dutch Delft service known today, and it is on display in the Lobkowicz Palace Museum in Prague. Van Dam 2004 (note 2), p.81.

[5]  Such an arrangement probably originating in Renaissance Italy, where the foundations of our dining culture were laid.