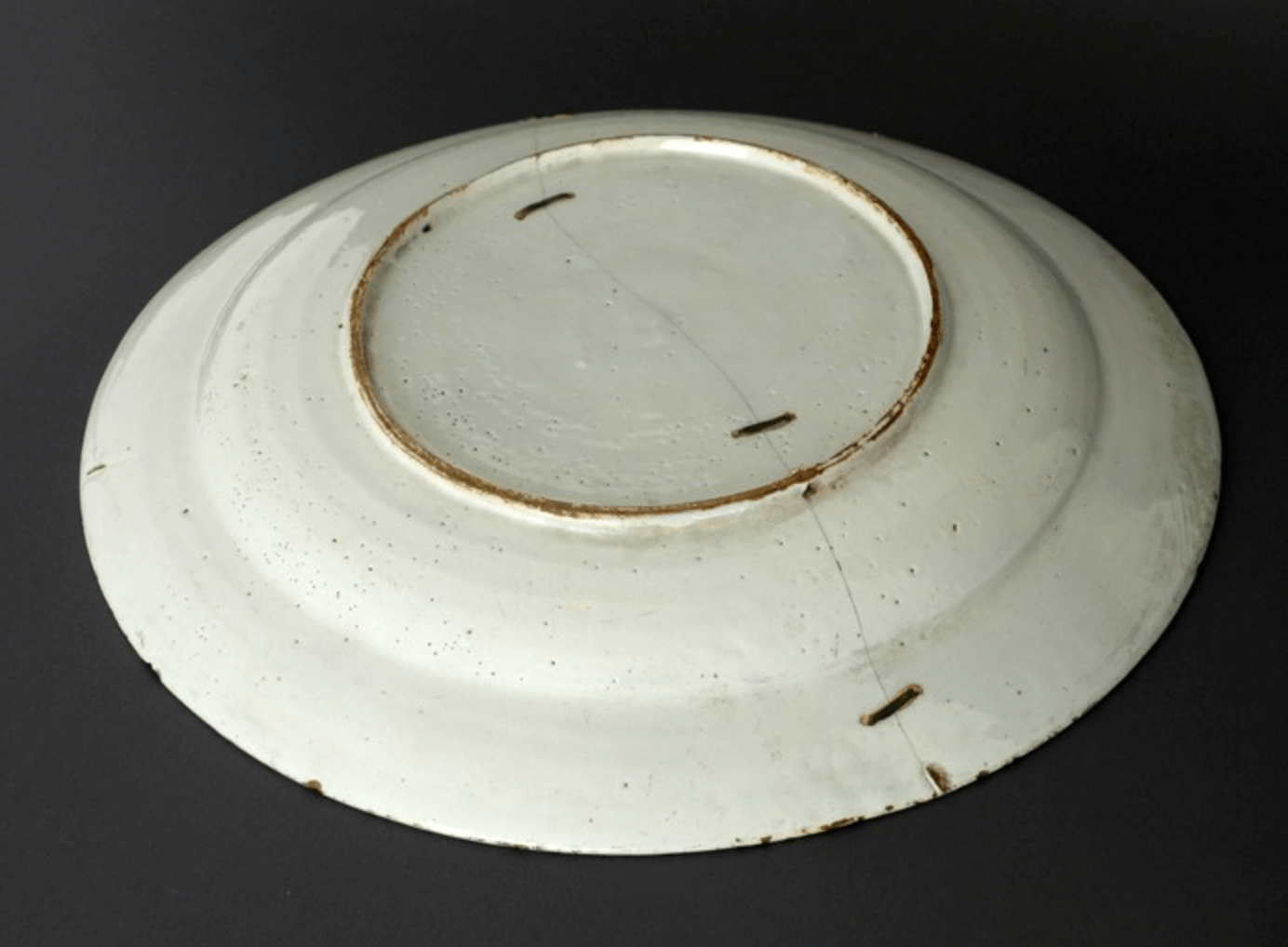 Delftware is a fragile material and therefore the breaking and cracking of these approximately three-hundred- year-old objects is almost inevitable. Today, objects are restored in an ethical manner after much research, whereas restoration was much different in the past. Especially in the seventeenth and eighteenth centuries, many Delftware objects were utilitarian and they were quickly restored to extend their lifespan.

Without the availability of strong and durable natural glues, metal bonding was used since antiquity to make broken or cracked earthenware watertight and heat resistant again. Since the eighteenth century, metal rivets (‘crammen’) have been used to repair faience and porcelain in Western countries. With this technique, holes are drilled on either side of the fracture or crack, which are then pressed together with connecting pieces of metal. The drilling of holes into pottery is tricky, and therefore there were several different models of hand-driven drilling machines. The drilled holes could either be through and through, strung together with a thin metal wire; or connected with u-shaped rivets, for which the holes did not need to be through and through. The first method was often used for fractures in difficult places, such as handles, or for surfaces with a lot of relief. This technique was visible on both sides, in contrast to the latter one, which was only visible on one side, and, if the rivets were well secured, no glue was even needed.

Riveting was first thought to have originated in China, since Jesuits traveling through China in the sixteenth and seventeenth centuries recounted broken porcelain being sewn up with copper thread. However, historical sources show that in Western countries objects were repaired with metal wires long before the sixteenth century.[1]

By the fifteenth century, professional ceramic menders were regularly mentioned in songs and farces. A contemporary Dutch song about street vendors announcing their goods includes one about a repairman of lanterns and dishes: “Breeken nap, maken nap tebroken! Lanternen maken, lanternen, lanternen, platelen cram ic”.[2]  Ceramic menders are also depicted in prints. In Casper Luycken’s (1672 – 1708) series of drawings of street vendors, a woman is depicted with the description: “Breekje wat, breekje wat” (“did you break something, did you break something”). Although it is not clear from the image that she is a glass and ceramics mender, the caption indicates this. Furthermore, a sign above the entrance of a house in the city of Leiden said “Breekje daar niet wat? (…) Hier woont het vrouwtje die om aan de kost te raken alle gebroken kruiken weet weder heel te maken” (“Did you break something? (…) This is where a woman lives who mends all the broken jugs for a living”).[3]

During the eighteenth century, ceramics repairs had become a regular trade. In Dutch population registers the “krammer” or “porseleinkrammer” is mentioned from the eighteenth century onwards.[4]  By the end of the century, there were several types of menders and even more different repair techniques, which of course was closely linked to the growing popularity of ceramic products in European households.[5]  The profession was called “porseleinkrammer” (porcelain riveter) or “schotelnaaier” (dish sewer).[6]  Since it required little tools or resources, ceramic repairs were easily done on site and riveters often traveled from city to city to market their trade. The profession was relatively straightforward and inexpensive to learn. It was thus not highly valued and workers were not well paid.[7]

Glue was another option for the repair of ceramics, and many eighteenth-century books outline recipes for glues and fillers that were based on a mixture of protein and quicklime. Other recipes for glues and fillers for ceramics used all kinds of natural materials, including animal glues, garlic juice, cheese, milk and even the mucus of snails.[8]  However, glue was often a problematic solution because it was not heat or water resistant.

Rivets were also commonly used for the repair of non-ceramic materials, such as metal and wood. The method was used to reaffix missing ears or handles on these objects. The application of rivets on non-ceramic materials was probably entrusted to other craftsmen, such as silversmiths and woodturners, and not to the typical ceramics menders.

When ceramic collecting became fashionable during the second half of the nineteenth century, several books on repairing, restoring and conserving ceramics came on the market. Not only had the restoration materials and methods developed, the aim also shifted to restore decorative and collection worthy objects to their former beauty.[9]  Rivets were no longer preferable, and fired ceramic materials were often used to replace missing parts. This difficult technique could only be executed by the ceramic producers themselves. The nineteenth-century ceramics repairers may be seen as the pioneers of modern ceramics restoration. Although both techniques co-existed during the nineteenth century, riveting was only used for objects of daily use, and no longer for decorative objects. By the 1980s riveting was considered a historical method of ceramics repair. However, riveted repairs are actually preserved nowadays if they are historically important and condition allows it.[10]