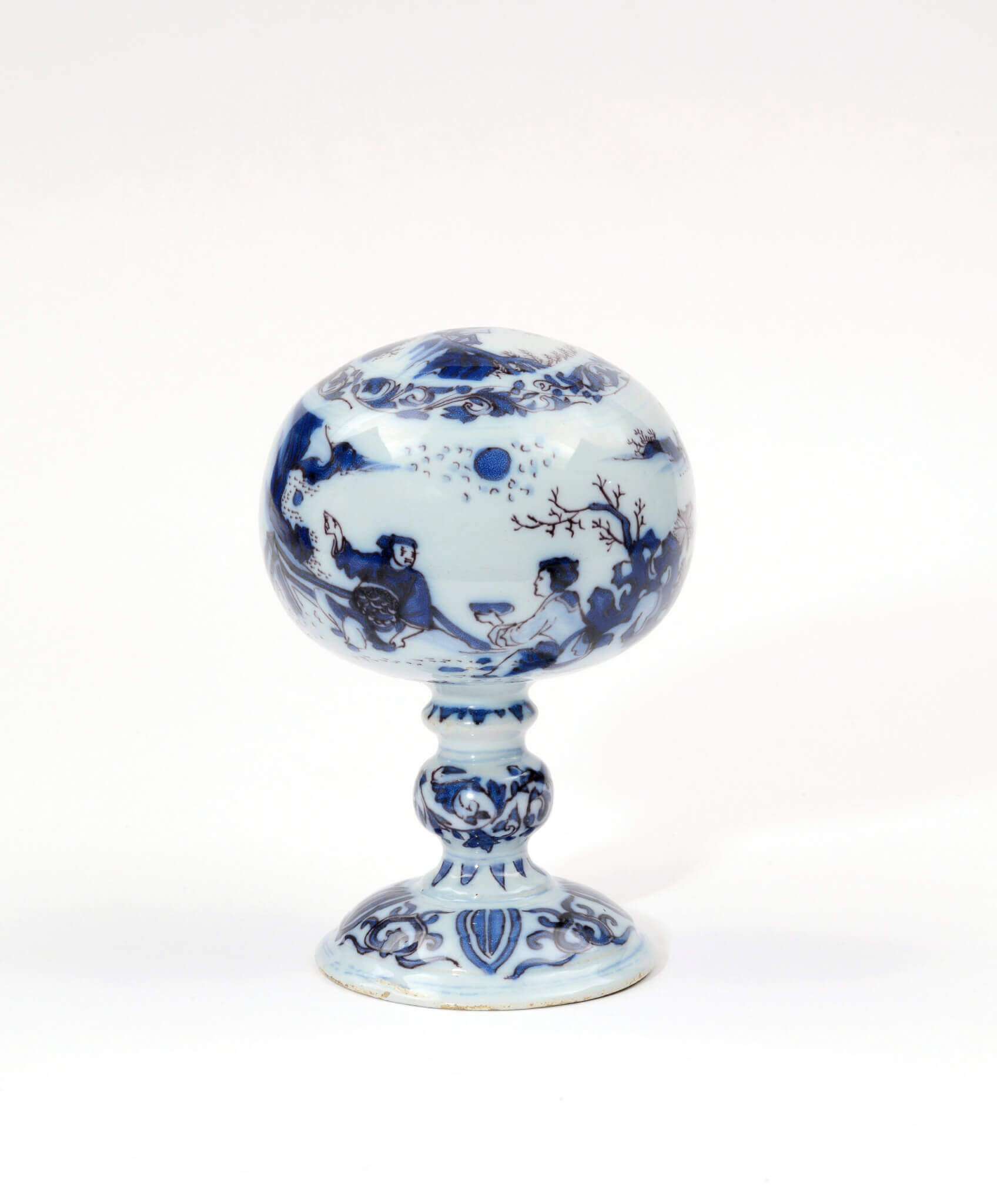 Delftware was produced in numerous forms and functions, some of which remain unclear today. One example of such objects are the so-called wig stands, which are designed as a sphere supported on a stem above a foot.

The French, and especially King Louis XIV, dictated one of the most fashionable and unusual accessories of the period: the wig. Long, curly hair was considered an expression of masculine beauty and dignity, and wigs were worn by men from an early age to achieve this. The French king started the fascination with beautiful locks when he grew his long, curly hair at a young age. His subjects followed suit and wore their hair in a similar fashion. Later, however, Louis XIV experienced early balding. He compensated the loss of his most beloved accessory by wearing wigs, and his loyal followers eventually did the same. The fashion spread throughout Europe once English king Charles II wore a wig, which became known as the “periwig” or “perruque.” 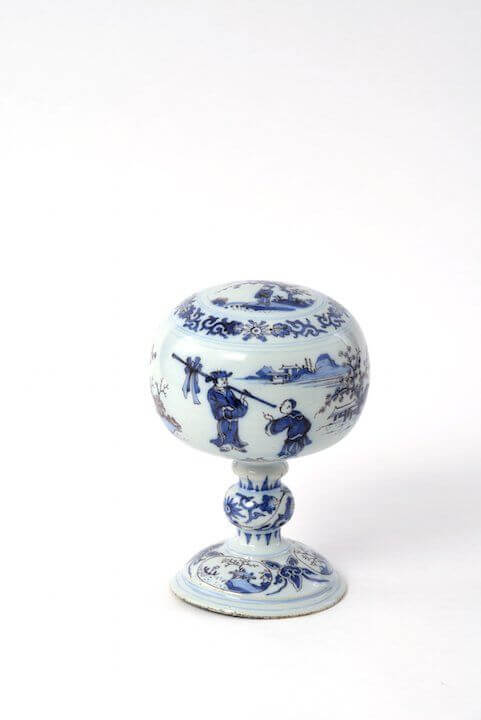 Wigs were a costly accessory and could be even more expensive than a whole ensemble. They were made from horse hair, jack hair or human hair, of which the latter was the most valuable and worn by the richest. Long, curly and dressed with perfume and powder, the wigs grew more artificial in appearance until the end of the century, when wig styles for men started following women’s hair fashions. They became the standard headgear of the nobility and upper middle classes across Europe, however beautiful their own hair might be. Like clothing, wigs became a fashion item subject to new whims and ever-changing styles that have enriched two centuries of our fashion history.

Not only were they fashionable, but wigs also covered up myriad health and hygiene issues. The venereal disease syphilis was the most common infectious disease in Europe in the seventeenth century, which often led to baldness. In fact, syphilis may have been the cause of Louis XIV’s early baldness. The loss of hair symbolized sexual escapades, infidelity and contagiousness and was thus a shameful trait. Before the invention of antibiotics, the disease remained difficult to treat for centuries and was often concealed by the use of wigs.

Wigs required tedious maintenance to prevent them from smelling over time. Each day they were sprinkled with scented powders, which created the characteristic white wigs. Blue and pink powders were also used, especially by women. The powdering was usually done in a separate wig room, because the application of powder was very dusty. During powdering, a large bag would be held in front of the face to avoid getting powder on the skin. At night, wigs were placed on spherical wig stands that were designed to help preserve its shape. Seventeenth-century wig stands were a rare and luxurious item, and there are almost no surviving examples today.

These so-called Delftware wig stands range in shape from spherical, octagonal and many-sides and were produced at the end of the seventeenth century. The varied shapes have led scholars to argue the function of these objects. It has been argued that Delft potters produced ornate wig stands to compete in the luxury market. Further, it was claimed that these objects more likely graced a table or a shelf in the panelling of a room, and were not actually used as wig stands. One reason to support this argument is the varying shapes of the stands that do not match common head sizes. Moreover, this assertion is supported by a family portrait by Hendrik Cornelis van Vliet, depicting Michiel van der Dussen and Wilhelmina van Setten in 1640. In the background of the painting, the high, narrow classical chimney is decorated with bulbous, spherical forms that are likely made of stone. The ornaments seen in the painting are also found in architecture. They were regularly placed at the top of stairs, and along balustrades. Based on this, the Delftware forms may have been produced as ‘showpieces’ to resemble these architectural ornaments, and decorated mantelpieces and cabinets.