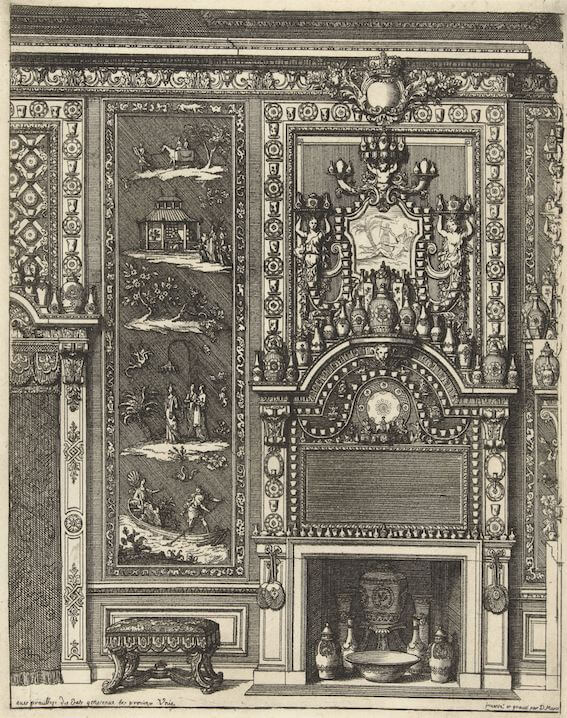 In the seventeenth century, interior design was used as a means of image cultivation by the Royal court, and especially by women. Lavishly decorated grand kitchens, bathrooms and the most sensational of rooms, the porcelain room (or the chinoiserie cabinet) communicated the wealth and prestige of its inhabitants. These designated rooms for porcelain, and later Dutch Delftware first appeared in the Netherlands but quickly spread across Europe after several female members of the House of Orange promoted the concept abroad.[1]

Interior design was regarded as a female domain because of the different functions and facilities of men and women within the palace. Rooms especially for women appeared by the seventeenth century, in particular rooms housing porcelain and Delftware collections.[2] Chinese porcelain was so scarce in Europe in the fifteenth and sixteenth centuries that it was displayed as a valuable rarity among the other objects d’art in the cabinet of curiosities, and was regarded as a suitable gift for monarchs. Collecting porcelain was a popular pastime, especially among aristocratic and well-to-do women. Although porcelain is mentioned in the inventories of William the Silent (1533-1584) in Breda in 1567 and of his son Philips Willem (1554-1618) in Breda in 1619, the largest collection was owned by Princess Amalia van Solms.[3]

Amalia van Solms (1602-1675), Princess consort of Orange by marriage to Frederick Henry, Prince of Orange, was passionate about porcelain. According to her dispositieboek of 1673, she had a collection of 1185 pieces.[4] Possibly inspired by the porcelain cabinet of Louise de Coligny in which 285 porcelain objects were displayed among many other (exotic) objects d’art, Amalia created a porcelain cabinet and gallery at Palace Noordeinde in The Hague.[5] A 1634 description mentions the red painted and gilded shelves that displayed the porcelain in her Excellency’s gallery and two pedestals of the same material for two large porcelain pots. Underscoring her passion, the Amsterdam Chamber of the VOC (Dutch East India Company) asked the Chamber of Zeeland to set aside some of the finest and most beautiful porcelain of different types to give to Amalia in 1639.[6]

In 1647, Van Solms was forced to move after she became a widow. One of the first changes she made to her newly established apartments was the creation of a two-part room explicitly designated as a ‘groote porceleyn-cabinet’ (large porcelain cabinet). Porcelain was well-represented in her inventories under the mention of ‘gemengelde frayichede’ (mixed fine things). These developments were the beginning of a new fashion, which in the second half of the seventeenth century would become more and more popular, not only in the Netherlands, but also abroad.[7] In 1654, Amalia constructed a room almost entirely designed in Asian style, which was the most sensational and earliest room of its kind. The room was designed as a closet covered with Chinese lacquer panels and filled with objects inlaid with mother of pearl, probably showing many of her porcelain objects.[8]

Amalia’s porcelain room became an inspiration for many others. Her four daughters, all of whom were married to German princes, each had a pleasure palace built in which the interior fittings and decorative schema incorporated references to Huis ten Bosch and their parents’ other palaces. The four Princesses endeavored to introduce the superior achievements of Dutch high culture to their husband’s German residences, most of which were modestly furnished and still bore the scars of the Thirty Years War.[9]

The grandeur and originality of Amalia’s porcelain room must have inspired Mary Stuart (1662-1694), who would later be known as the patron saint of Dutch Delftware. Princess Amalia died in 1675, two years before Mary’s arrival in the Netherlands. According to the laws of the Republic, Amalia’s porcelain and other possessions passed to her daughters and their children. However, Amalia’s aesthetic influence remained in the rooms. For example, a lacquered closet at Huis ten Bosch was still intact when Mary arrived. Following the tradition set by Amalia, Mary availed herself of the opportunities offered by the imports of the Dutch East India Company to acquire exotic products from the Far East. It is probable that many great pieces were given to her by the Company as a gift, as they were to Amalia.[10]

Besides these imported exotic pieces, Mary also filled her residences with Delftware objects that were decorated in the spirit of Chinese porcelain. Delftware pieces were of a high standard when Mary arrived in the Netherlands. Although not explicitly mentioned, Amalia’s estate probably contained pieces of Delftware among the porcelain items. The only explicit reference to Delft porcelain was made in the inventories of Mary and of Amalia’s daughter, Albertine Agnes.[11]

Although Mary’s collections and the interiors of her rooms in the Netherlands are almost entirely lost, inventories and contemporary descriptions contain valuable information for scholars today. The inventories suggest that she filled her residences, such as Palace Het Loo in Apeldoorn, Kensington Palace in London, and Hampton Court Palace in Richmond-on-Thames, with Dutch Delftware and porcelain. However, the majority of the inventories were completed after Mary’s death and probably omit all the small, easily moveable objects.

At Honselaarsdijk there were over three hundred pieces of ceramics. Most of the Chinese porcelain was in Mary’s rooms, in the audience chamber and the closet; the Delftware (which numbered at least 47 pieces) was mainly in her gallery and in the bathing quarters. Palace Het Loo was the only house that was built entirely by William and Mary and therefore Mary’s apartment reflected her preferences. The ceramics and flower decorations of the house complement the rococo designs of Daniel Marot, the interior designer.[12] Although Palace Het Loo probably had a porcelain cabinet, the room was later transformed into a library. The inventory of 1713 mentions that pieces of Delftware and porcelain were in every room with the exception of the book closet and were referred to as being on and in front of the chimneypiece.[13] Pyramid-shaped arrangements on the chimney and on etageres form a recurring element in the display of Delftware.

Unfortunately, Queen Mary’s collection of Delftware from 1677 to 1689 is only known through excavations adjoining the garden of her melkkeldertje (little kitchen basement) from the Palace Het Loo. After the coronation of William and Mary in 1689, they principally resided in England. Mary’s collection of Delftware, which was installed primarily at Hampton court, increased both in size and extravagance of shape, presumably an accommodation both to the palace’s rebuilding and refurbishment program undertaken by the royal couple, and to the scale and grandeur of the rooms. At Hampton court Mary had her own pavilion, the Water Gallery, where much of her Delft was displayed.

It is no coincidence that the English nobility used architecture and interior design as a means to gain social status, a trend established during the reign of William III and Mary II. The English easily adapted to the Dutch court and the favored architects of the day.

It is clear that as early as the mid-seventeenth century, various European courts integrated Delftware and porcelain into palace interiors. The House of Orange disseminated the style throughout Europe, transforming the novel porcelain cabinet into an indispensable hallmark of courtly prestige. By 1700, the porcelain cabinet became an essential component of every princess’s private apartment, and was indeed its most exclusive and imposing room.[14]

[9]  “The very names of the palaces: Oranienburg (near Berlin); Oranienstein (near Diez an der Lahn); Oranienbaum (near Dessau) and Oranienhof (near Bad Kreuznach) clearly refer not only to their family of origin but also emphasize the cohesion of their relationships.” Van Campen & Eliëns 2014 (note 1), p. 175.