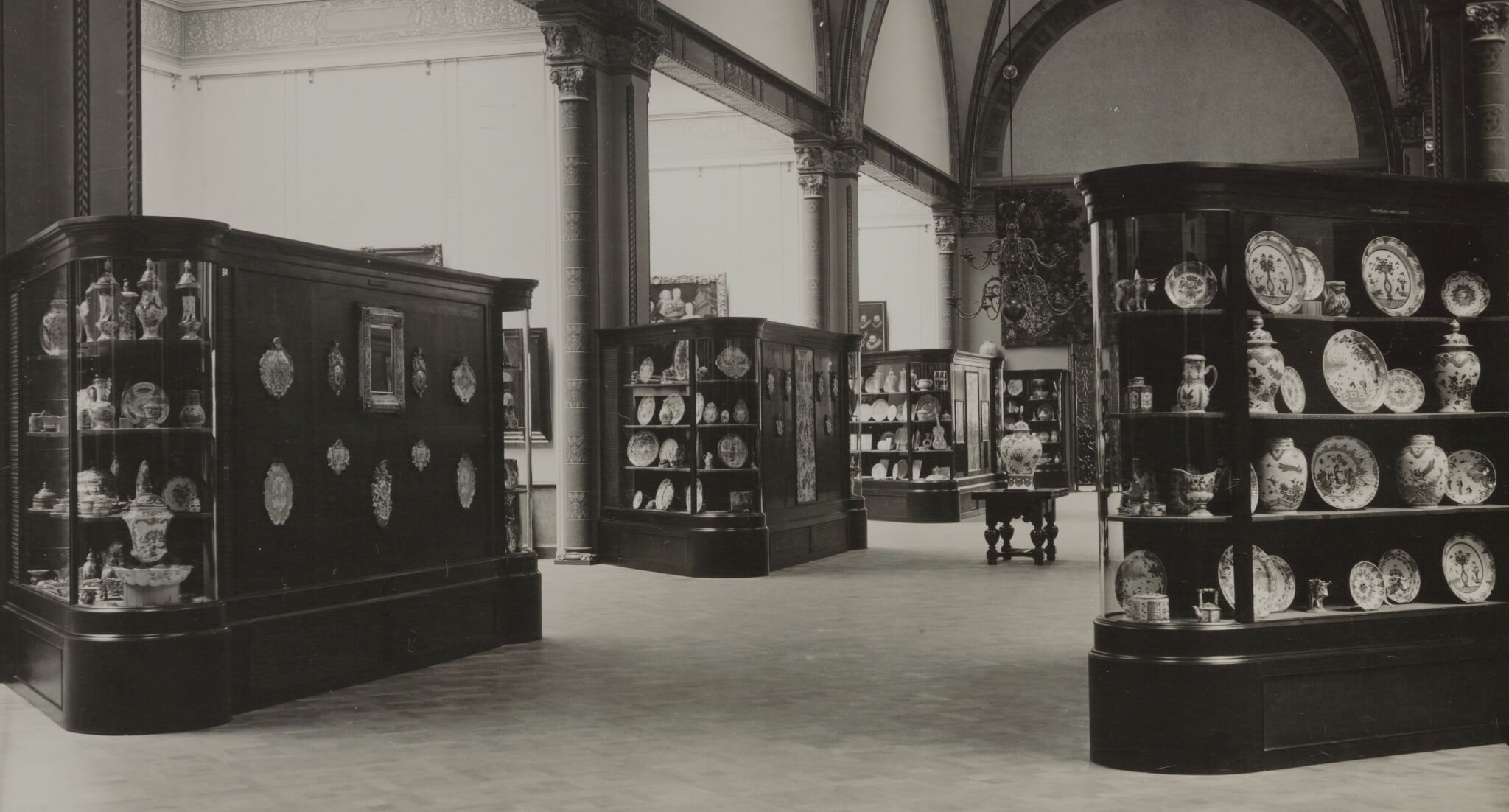 At the end of the nineteenth century, there were few pieces of Dutch Delftware in Dutch museum collections. Although some museums actively started collecting Delftware, the collections were small and of little significance. At that time, the most interesting collections of Delftware objects, in both quantity and in quality, were passionately assembled by private collectors.

One of the most important collections of Delftware was assembled at the end of the nineteenth century by John Francis Loudon. Born in Rotterdam in 1821, Loudon was the third child of Alexander Loudon and Suzanna Valck. His Scottish father joined the British navy in 1811 as a naval officer in Java, where he was an acting resident of Semarang. Alexander Loudon made a fortune in the following years as a sugar and indigo manufacturer and became a Dutch national in 1824. In 1825, Alexander and Suzanna returned to Batavia, leaving their three sons with the Valck grandmother in Utrecht. The children joined their parents in Batavia in April of 1831. John soon followed the footsteps of his father and was commercially active in the Dutch East Indies in the 1840s and 1850s. As Loudon made a fortune through his business in the Dutch East Indies, his family had risen in the social hierarchy of The Hague.

Using his own wealth and the capital inherited from his father, Loudon began to collect Delftware around 1867 and amassed the main part of his collection in just ten short years.[1]  When he returned home, Loudon purchased a stately home on the Hoge Nieuwstraat in 1869 and decorated it with Delftware.

John and his brothers were in the highest circles of The Hague, which consisted of government officials and diplomats. Through these connections, he met Charles A.E. Baron de la Villestreux (1831-?), the secretary of the French delegation in The Hague, and the Austrian envoy Ferdinand Freiherr Baron von Langenau (1817-1881). De la Villestreux and Von Langenau were among the first to collect Delftware and undoubtedly influenced Loudon. Between 1867 and 1869, Loudon purchased the majority, or possibly the entirety of De la Villestreux’s collection after he was forced to liquidate upon his transfer to Italy.

Between 1869 and 1876, Loudon grew his collection through auctions, antique dealers and directly from other collectors. He was a fanatical collector with an unlimited budget, which was a luxury that few individuals could afford. Using his wealth and social network, Loudon acquired a number of important masterpieces during these years.[2]  For example, Loudon purchased objects from the Von Langenau collection, probably when he left the Netherlands in 1871.[3]  He also bought a large polychrome tile panel with the depiction of a flower vase from the art dealer Sarluis in The Hague. Around 1877, Loudon acquired several objects, including a bust of King Stadholder William III from the collection of the late Queen Sophia. In 1876, Loudon bought a Delft violin for the costly price of 1,500 Guilders from the famous auction of the collection of W.G.F. van Romondt. Interestingly, Van der Kellen, the director of the Nederlandsch Museum, wanted to purchase objects from this auction but did not consider the violin because he thought it would be too costly.[4]

Loudon’s collection had grown to over 550 objects, which adorned various rooms in his house in The Hague. The majority was placed in the ‘salon’ and the ‘voorkamer’, but also in the dining room, sitting room, vestibule, and even on the staircase. Some objects, such as the large tile panel with the depiction of the flower vase were stored in the attic, since there was a lack of space in the overcrowded rooms.[5]  The collection attracted distinguished visitors. For example in September 1883, King William III and his second wife, Emma, in the company of Emma’s sister Helena Friederike and her husband the Duke of Albany, Prince Leopold of Great Britain visited his house.[6]

Loudon made his collection of Delftware available to others by welcoming visitors, but also by publishing a catalogue.[7]  Published in 1877, the collection catalogue was written by the Frenchman Henry Havard who was living as a political refugee in the Netherlands at the time. Havard was an art critic with minimal knowledge of Dutch art, but he also wrote the catalogue for the collection of W.G.F. van Romondt in 1875.[8]  After the catalogue was published, Loudon rarely added to his collection. Only about fifty objects appeared to have been added after 1877, and masterpieces that came onto the market after 1880 were no longer acquired.[9]

Loudon’s collection had a very good reputation and was seen as the epitome of Dutch pride in the field of decorative arts.[10]  The significance of the collection stemmed from its major rarities, but also the quantity of objects, and the series of objects that illustrate the different phases and aspects of Delft.[11]  He was however a product of his time and had a particular interest in objects painted with petit feu colors or in the Imari colors. In addition, the large tile panels and large plaques he purchased were presumably meant to provide his house with suitable decor.[12]

It has been suggested that because he was not a regular collector, Loudon assembled his collection to become a nationalist art collector. While he probably appreciated Delftware, the sudden emergence and end of his collecting fury are indicators that he collected with a certain purpose. As the son of a Scottish father and Dutch mother who was raised partly in the colony, the collection may have served to emphasize his homeland loyalties and prove his Dutch citizenship.[13]

Although Loudon wanted to make his collection publicly accessible and visible, his plan for its future was unclear. When he passed away in 1895, unmarried and as far as we know childless, he left the entire property to his brother James. The collection remained in James Loudon’s house until 1916, a year after his widow’s death. Their children donated the collection to the state, with the following requirements: the collection had to stay together, it had to be placed in the Rijksmuseum, Amsterdam and the room had to be named after the collector: John F. Loudon.[14]

In April 1916, a large number of baskets with around 500 objects of Delftware arrived by train in Amsterdam from The Hague.[15]  From then onwards, the Loudon collection was given a central place in the Rijksmuseum. It was first placed in the large ceramics hall; in the Eregalerij since 1926; after WWII in a special room devoted to Delftware; and after the latest renovations, part of the collection is exhibited alongside paintings, furniture and other decorative objects from the same period. The remaining pieces are displayed in the so-called Special Collections section, where all Delftware is placed together. The bequest of this collection remains of great importance for the museum even today as it filled a gap in the collection of Dutch applied arts, which the museum could have never acquired with its own funds.[16]