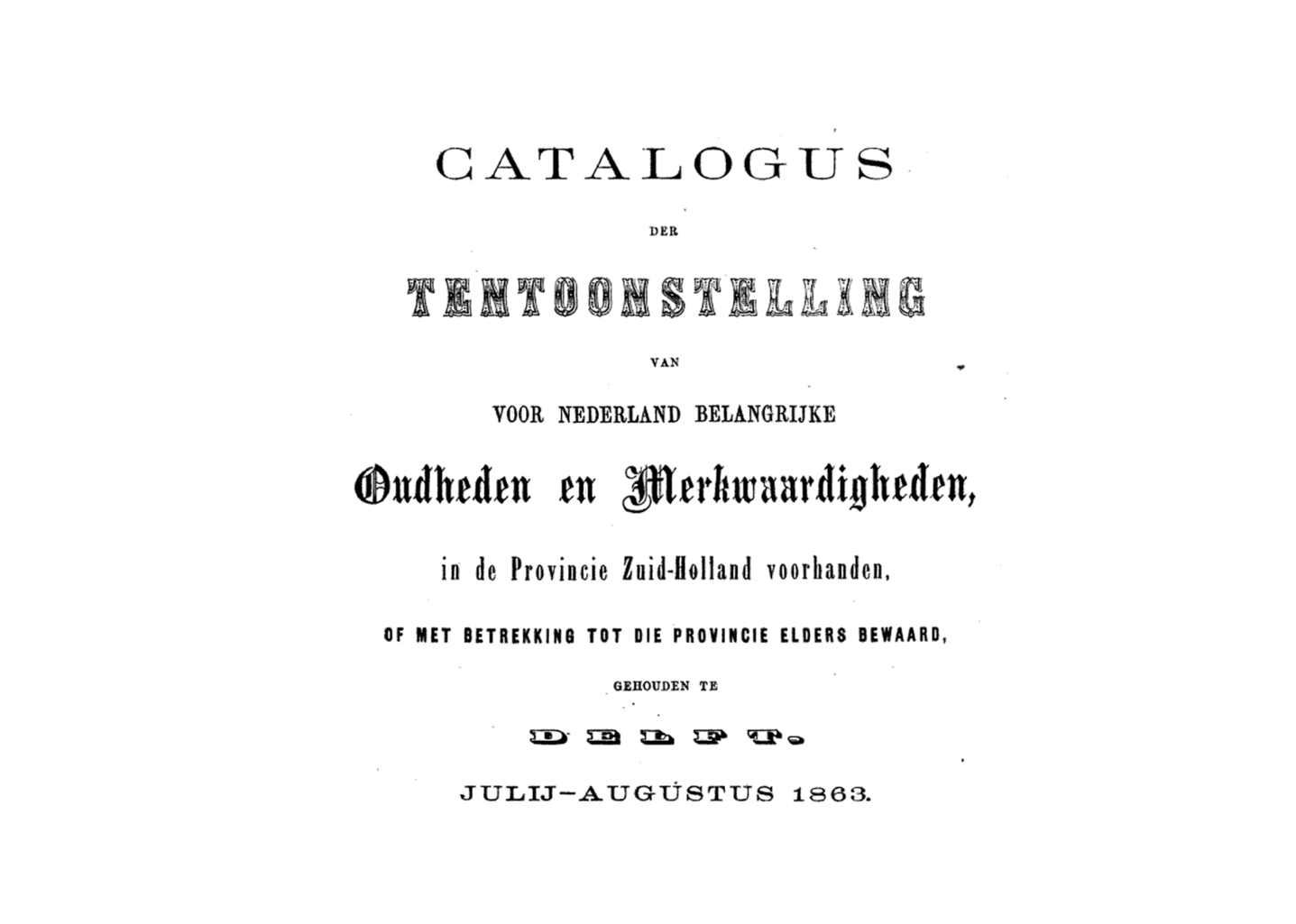 Despite its predominant role in the history of European ceramics, Dutch Delftware only became a serious source of interest from art historians and collectors in the second half of the nineteenth century, a period that rehabilitated the decorative arts, and particularly ceramics. Prior to the 1850s, there was little interest in the decorative arts in the Netherlands. Delft earthenware was known, but it was not considered a significant subject for museum exhibitions. For example, in 1852, the Frenchman Albert Jacquemart visited the Mauritshuis (Royal Cabinet of Curiosities) in search of local ceramics. He was astonished that Delftware was almost entirely lacking, except for one interesting object: a plaque by Frederik van Frijtom.[1]

This in contrast to England and France where ceramics were more actively studied and collected. Private collectors in both countries mostly focused on Italian majolica in the mid-nineteenth century, but they also looked at Delftware.[2]  However, Alexandre Brongniart (1770-1847), director of the museum at Sèvres, dismissed two Delftware vases as being derivative of Oriental porcelain.[3]  Despite the disregard for Delftware, the subject would soon play a pivotal role in the canon of Dutch art history.

Before Dutch collectors developed an interest in Delftware, they concentrated on what was readily available, for example Chinese porcelain or stoneware jugs. These objects were thought to be intimately connected with the country’s history.[4]  In fact, the focus on local culture became increasingly important for the creation of a national identity in the following decades.[5]

In 1854 and 1855, large quantities of stoneware were exhibited at two decorative art exhibitions at Arti et Amicitiae in Amsterdam. In contrast, there were only two minor sections devoted to the exhibition of Delftware: Delfts Blaauw and Gekleurd: Verglaasd, Delftsch en ander Aardewerk.[6]  The prevalence of stoneware was partly due to the sale of the collection of Jacques Moyet of Amsterdam on 13 April 1859, when a stoneware jug dated 1584 fetched 90.50 guilders and an AK marked so-called tulip case a mere 5.25 guilders.[7]  The popularity of stoneware can also be explained by the prevailing chauvinistic attitude that the best stoneware was made in Flanders and the Northern Netherlands. When doubts about the origins of stoneware surfaced in the 1860s, the interest in Delftware—another real Dutch product—began to rise.[8]

In 1857, an exhibition in Utrecht showing ‘oudheden en merkwaardigheden’ (antiquities and peculiarities) was among the first to portray Delftware as an important product of the Netherlands.[9]  The wealthy W.G.F. van Romondt (1815-1876) from the city of Utrecht exhibited his collection here, which included several Delftware pieces. The blue and white violin, now in the Rijksmuseum in Amsterdam (inv. no. BK-NM-12400-91) was also shown here.

Further, the first edition of Guide de l’Amateur de Faiences et Porcelaines by Auguste Demmin was published in 1861. Several reprints of this ceramics guide appeared, growing from a small 176-page book to more than 1,500 pages, of which a hundred pages were devoted to Delftware. Demmin was a collector, dealer, advisor and prolific writer, who published this guide in reaction to the nascent interest in Delftware among collectors.[10]  Significantly, this publication provided a direction in the collecting of Delftware. There were, however, several misconceptions stated in the book. Demmin misdated many pieces of Delftware as earlier, and also wrongly stated that important Dutch painters, such as Johannes Vermeer, Jan Steen and Philips Wouwerman had painted on the faience themselves. Although this statement may sound unimaginable today, it was perhaps helpful for nineteenth-century readers to place Delftware in the line of the great Old Masters for the purposes of collecting.[11]

While the Utrecht exhibition and the publication advanced the popularity and knowledge of Delftware, its reputation was fully cemented in the summer of 1863 with the first major exhibition of Delftware. In the show, Tentoonstelling van voor Nederland belangrijke oudheden en merkwaardigheden in de provincie Zuid-Holland voorhanden, of met betrekking tot in de provincie elders bewaard, hundreds of objects were shown to the public in the city of Delft.[12]

One of the first important collectors of Delftware was the Frenchman Charles Antoine Edouard, baron de la Villestreux (1831 – ?). At thirty years old, he was appointed as second secretary at the French Embassy in The Hague. De la Villestreux likely attended the 1863 exhibition in Delft (he lent a brass chandelier for display), where he must have been captivated by the beautiful display of Delftware. Over the next several years, he assembled a collection of more than 250 objects, partly obtained from this exhibition.[13]  De la Villestreux continued to purchase Delftware, restricting his collection to objects painted with refinement and lacking any Chinese appearance. The painting on the objects was of utmost importance to De la Villestreux; it had to evoke a typical Dutch atmosphere. The shape, size or what they were used for was insignificant.[14]  These guidelines were outlined in Demmin’s book, but they also coincided with the contemporary Dutch taste. De la Villestreux did not enjoy his collection for long; when he became first secretary de la Légation de l’Empereur à Florence in May 1869, he sold the majority, or perhaps his whole Delft collection.[15]

Other early Delftware collectors were the Austrian ambassador Ferdinand Freiherr Baron Von Langenau (1817-1881), and the Dutchman Abraham Willet (1825-1888). These two men were possibly inspired by the increasing interest in Dutch decorative arts, fed by nationalistic feelings.[16]  Willet studied law in Leiden but left university early following the death of his father in 1851. With his share of the inheritance, Willet was able to pursue his passion for collecting art. He had a versatile collection: contemporary French and Dutch paintings, antiquities, stoneware, glass and later also Delftware. Most of his Delftware objects resided in his house in France, which boasted an eclectic interior that evoked the heyday of the Dutch golden age.[17]  Before 1874 the majority of his ceramics collection, especially stoneware, majolica and Delftware, had been sold already.[18]

Still, if Jacquemart had visited the Dutch museums in the second half of the nineteenth century in his search for ceramics, he might still have been disappointed. Although some museums started collecting Delftware, for example in 1875 the Nederlandsch Museum voor Geschiedenis en Kunst (Dutch Museum for History and Art) – nowadays the Rijksmuseum in Amsterdam, the collections were small and of little significance. The collecting of Delftware mainly took place in small private circles, whose collections were unfortunately sold and therefore sometimes broken up. Currently, we only know about important collections that stand out in quantity and quality due to their inclusion in contemporary literature. But there must have been smaller collectors below this supreme level. By the end of the nineteenth century, Dutch Delftware was highly in vogue and truly became the symbol for the traditional Dutch decorative arts.