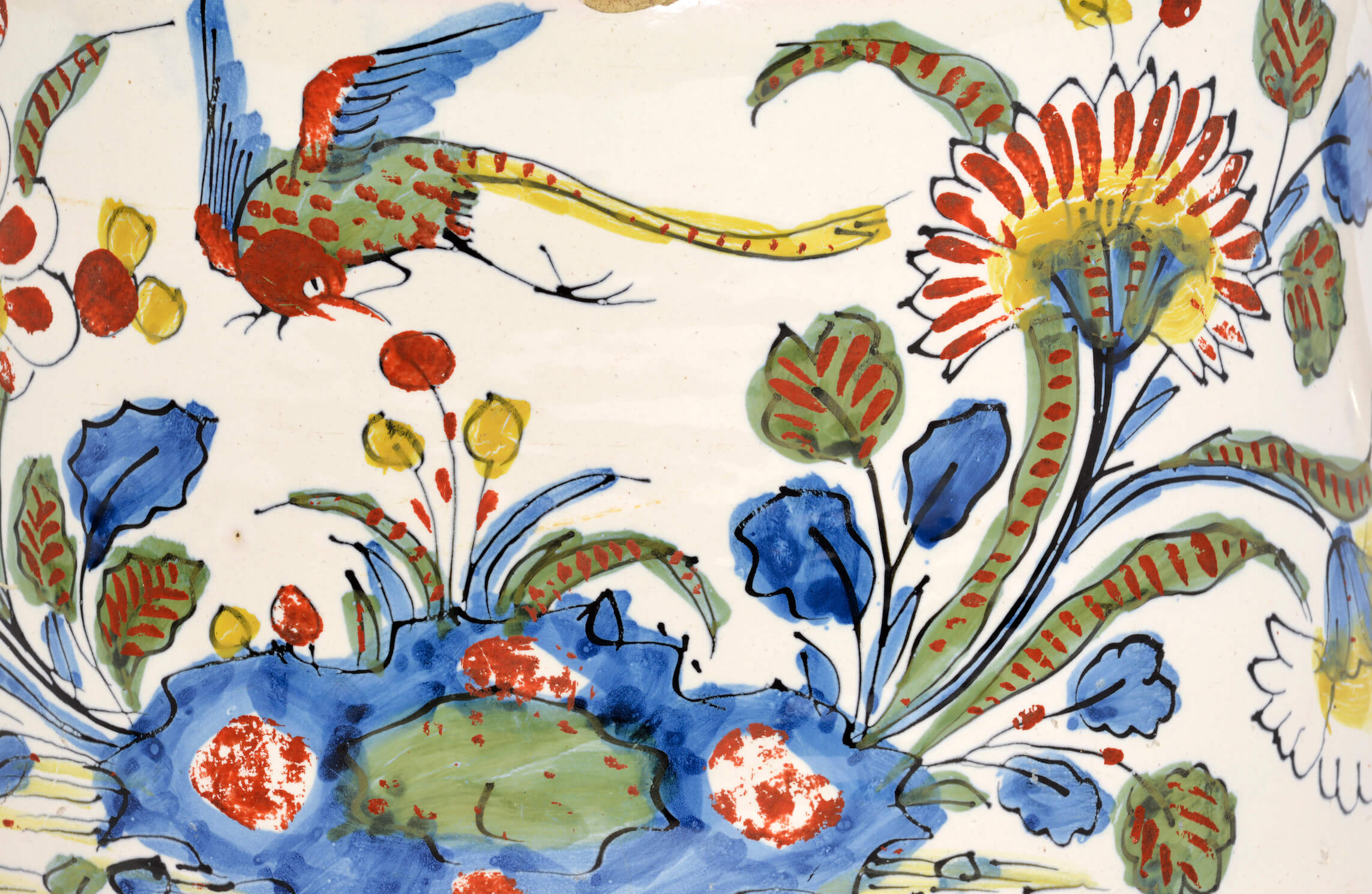 The range of colors seen on 18th century Delftware were achieved through various techniques, using skills honed throughout many years. Not every paint color could be realized in a single firing process, and there were often several rounds in the kiln. Ceramics painted with grand feu colors of blue, green, and yellow were fired at a high temperature of about 1000 degrees celsius.[1] Emaille colors and gold were fired in the petit feu at 600 degrees celsius. And finally, cold painted decorations, as the name states, were not fired at all. In this article we would like to take closer look at cold painted decorations in two groups: objects with blue, green and yellow decoration that were fired at high temperatures before the red lacquer was applied, and objects covered in a white tin glaze that received a cold painted decoration either subsequent to their firing, or many years later.

Cold painted red decoration circa 1700
Red was initially a difficult color for Delftware painters to fire; the metal oxides that gave the color to the glazes could not withstand the high temperatures of the kiln. Delft artists first looked at Middle Eastern and Italian painters for a solution, and used a thin layer of diluted red ochre as a paint, called ‘rode bolus’ (red bolus), or ‘Armeense zegelaarde’ (Armenian seal-dirt).[2]  This technique yielded various hues of red depending on the place of origin of the red ochre. The combination of iron oxide and contamination determine the color: Terra di Pozzuoli contains only 20% of iron oxide, but in Spanish or Persian red it can reach up to 95%.[3]

Cold-painting was another solution to achieving red decoration. In this technique, a red lacquer-paint was applied to the decoration after the blue, green, and yellow paints had been fired. By 1700, Delft factories mastered the technique of firing red paint. De Grieksche A (The Greek A), De Metaale Pot (The Metal Pot) and De Roos (The Rose) were famous for their beautiful decorations in blue, green and red, sometimes even enriched with yellow and black. 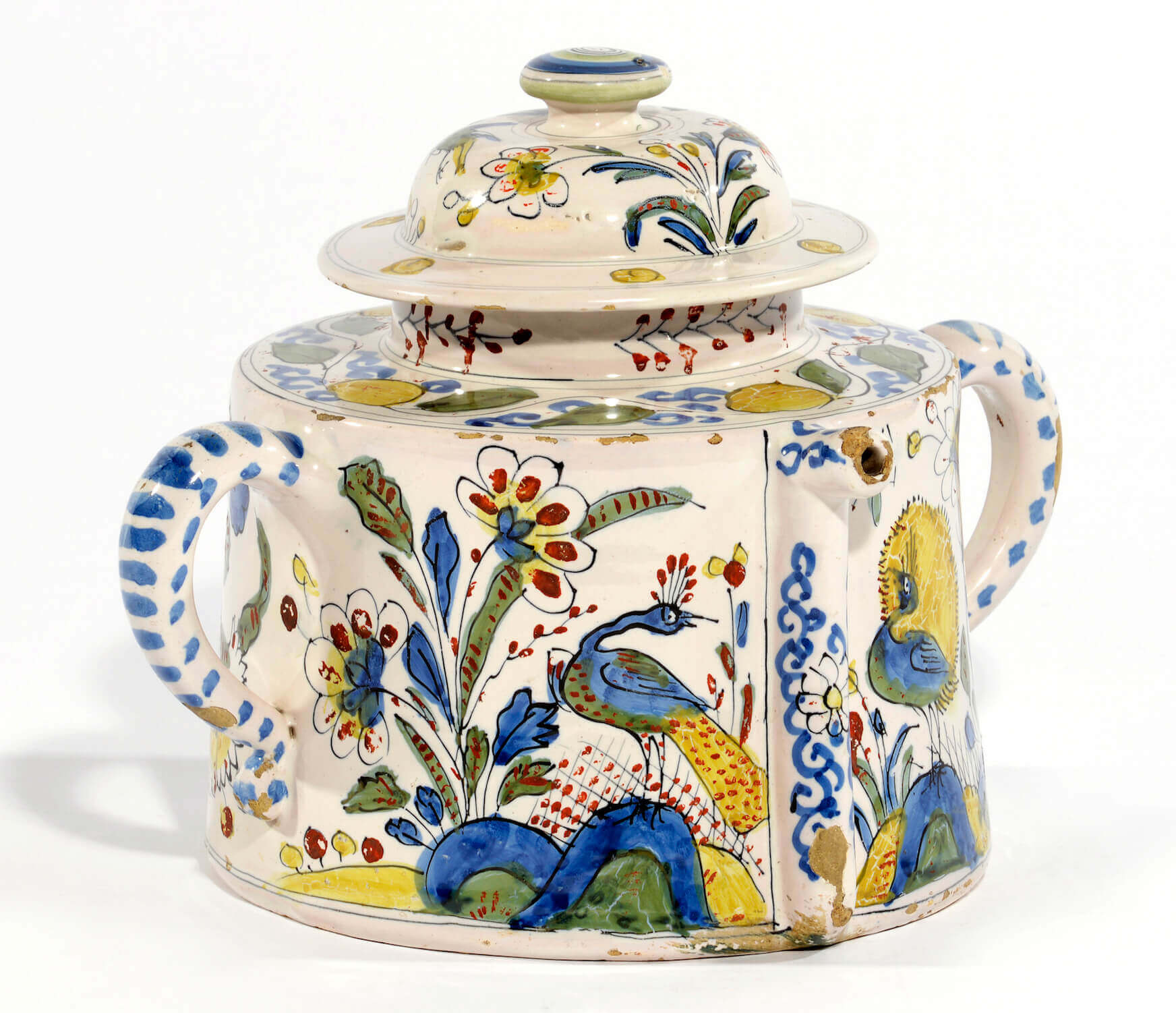 Few examples of cold-painted red decoration remain because many painters continued to use the aforementioned red ochre technique. Another reason for their scarcity is that the lacquer did not adhere very well to the glaze, and the painted decoration easily wore away.[4] This rare posset pot, unmarked but attributed to De Paauw (The Peacock) Factory, demonstrates the cold-painted technique. The bright red paint highlights small details like stamen, feathers, dots, and lines that form creases in leaves and flower petals. The cold paint is not merely an accent, but integral to the finished design.

Although further research is needed, many pieces in blue, green, and yellow were presumably once highlighted with red paint. An example that follows this hypothesis is a pair of unmarked large bulb neck vases in our collection. One vase is still showing the cold painted red additions in the decoration, while the other lacks these red accents. This pair of vases perfectly demonstrates how the red accents beautifully complete the decoration in blue, green and yellow. It also suggests that several De Paauw marked objects painted in blue, green and yellow might have had red additions as well, explaining the strange “empty” areas in flowers or decorative borders that are commonly seen.

Painting on the glaze: ‘petit feu’ and cold decoration
In contrast to these objects, there are several objects that are covered in a white tin glaze and were painted either partly or all-over with cold-painted decoration. The limited color scheme of the grand feu colors could be enlarged by applying petit feu colors: soft coloured enamels and gold, fired at 800º celsius during a second firing.[5] The results were very colourful and often the pieces were delicately painted, but a second firing increased the expenses of production, and thus the sales price.

A more economical way to acquire colorful decorations, was the cold paint technique. After once-fired pieces received their decoration, they were not fired again at all. This eliminated a round of firing, which brought down the production costs. Several factories tried this less-expensive technique, but the new method was met with resistance. The cold-painted process required less work for the factory painters because the painting was executed by “kladschilders,” inferior artists working with oil-paint. The entire Delftware industry also reacted against the cold-decoration because it tended to discolor and quickly wear off. The factory owners feared that these inferior products would damage the reputation of the Delftware industry.[6]

Delftware scholar D.F. Lunsing-Scheurleer suggests that less prosperous clientele could purchase white Delftware pieces to decorate themselves using cold-paint decoration. Also, some examples bear painted decorations that were either applied at a much later period or even in another country. One example is a recumbent cow in the collection of the Gemeentemuseum in The Hague with nineteenth-century decoration.[7] At the beginning of the twentieth century, white Delftware was very popular, and scarce fragments of surviving cold painted decoration were removed.[8] This explains why we rarely encounter Delftware figures with cold painting still on them, and also explains why there is so little research done on this technique.