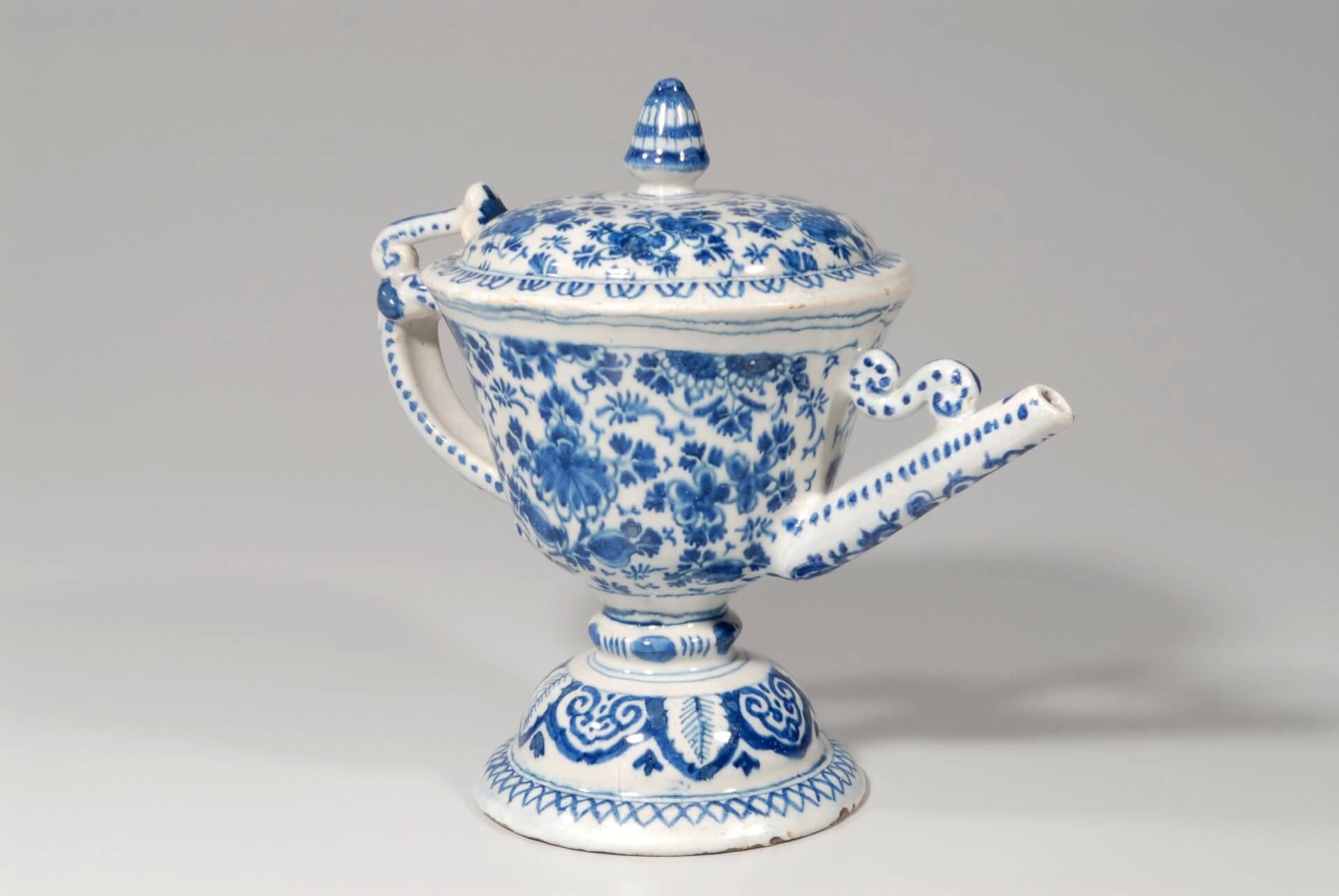 Every month we present a special object from the Aronson Antiquairs’ collection. The object of this month is a beautiful blue and white wine pot, from circa 1725. This very unusual wine pot functions by filling it through the opening beneath the ankle. The liquid is funneled into the body through a tube that forms a central wall and prevents the liquid from escaping through any aperture except the spout.

The shape of this wine pot is very rare and seldom found in Dutch Delftware. A possible source for the form are sixteenth-century Chinese porcelain wine ewers. Originally made for the Middle Eastern market, the ewers were based on Islamic metal prototypes. There are also Middle Eastern examples, such as sixteenth-century Armenian ewers and Iznik jugs made of earthenware. Of the known forms, the ewers were designed both with removable covers and coverless. Some of these ewers  were used daily for carrying water from the kitchen to the dining area and for serving family and guests. Others, often lidded and equipped with a spout, were used for containing water for hand washing and appear frequently with a bowl used as a basin.

Wine growing and consumption have enjoyed a long and rich history in Holland, and it is only logical that this Delft example was made for pouring wine. In the first centuries after Christ, the Romans introduced the tradition of wine growing throughout the northern borders of their empire. Although the first vineyards were mostly found in the area of Maastricht in the Southern Netherlands, the viticulture spread to other parts of the country as a result of the relatively warm climate during the middle ages. Dutch wine growing reached its peak in the fourteenth and fifteenth centuries, but encountered serious competition from beer when the addition of hops improved its taste and sustainability. Other factors contributed to the decline of viticulture in the Netherlands, such as climate change, the Eighty Years’ War and Napoleon’s heavy excise duties on non-French wines around 1800.

Despite these fluctuations, the Dutch were well known for their fondness for wine and beer during the 17th and 18th centuries. The Dutch genre painter Jan Steen (1626-1679) famously captured the cultural penchant for alcohol in his chaotic and lustful paintings of daily life. However, Steen’s paintings were moralizing, inflected with subtle hints that warned viewers of the consequences for drunkenness. A fine example of drunken subjects in his work is The Drunken Couple in the Rijksmuseum, Amsterdam. Depicted is a man and a woman, who are so drunk that they are unaware they are being robbed. Their foolishness is underscored by the print on the partition. It depicts an owl, considered a stupid creature in the 17th century. After all, it could not see by day, not even with a candle or eyeglasses. The drunken couple is thus just as blind as the owl, a message that survives in the English idiom ‘blind as a bat’.[1]  In the scene, the drunken man grips a similarly shaped wine ewer as this Delft wine pot. The ewer in the painting is made of metal, but the stylistic similarities to the ceramic model suggest another source of inspiration for the Delft potters.

The goblet-shaped body and integral cover decorated with floral and foliate sprigs beneath a striped conical knop, the cover rim with a border of double loop motifs, the straight spout and loop handle with blossoms and scrolls between bands of dots and affixed with an S-scroll strut or a pseudo-hinged thumbpiece, the knopped ankle with dots and dashes, and the bell-shaped foot with a wide border of ruyi-shaped lappets alternating with leaves above a diamond-guilloche band around the convex footrim, its interior with a central aperture into the body partially concealed by an applied scrolling cross.