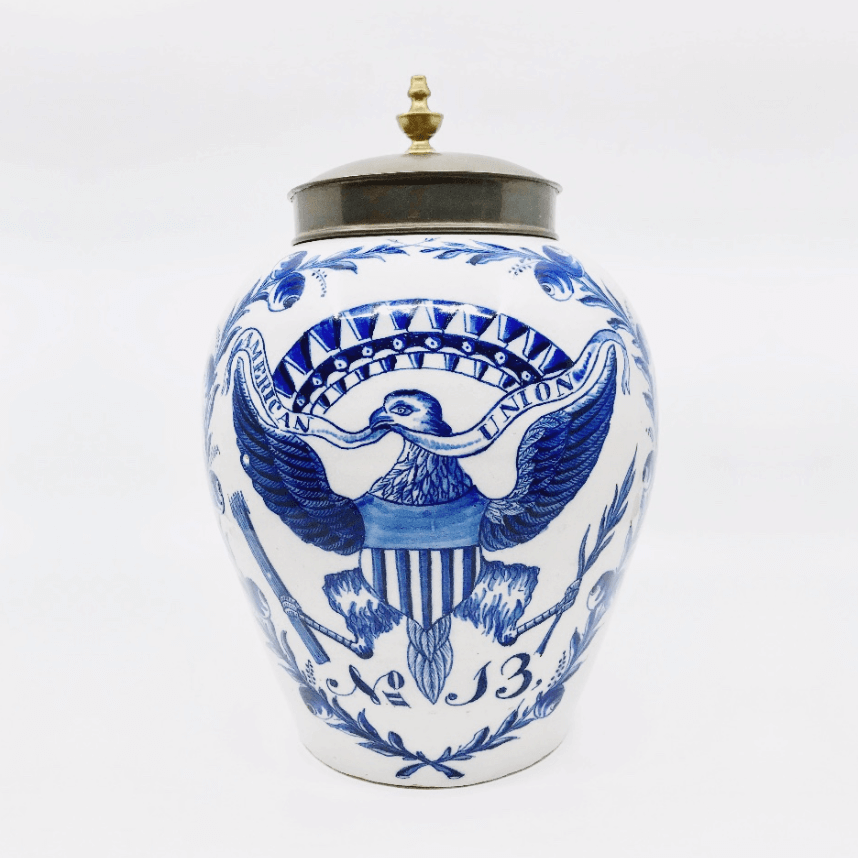 Every month we present a special object from the Aronson Antiquairs’ collection. This month we would like to show you this blue and white tobacco jar, from circa 1790. The tobacco jar is marked with an axe for De Porceleyne Byl (The Porcelain Axe) factory.

The decoration on this tobacco jar, depicting the obverse of the Great Seal of the United States is very rare and must have been a special commission for a numbered series of jars. The design of the Great Seal was intended to represent the thirteen original states, and the American bald eagle (the national bird) held thirteen arrows and an olive branch with thirteen leaves and olives, the shield contained thirteen stripes, in the aura above his head were thirteen stars, and the banderole “E Pluribus Unum” (“From Many, One”). The Delft painter, oblivious to the symbolism, simplified the details, and painted them in mirror image so that the eagle faces the arrows of war, rather than the olive branch of peace and the text in the banderole to “American Union”.

After the signing of the Declaration of Independence on the 4th of July 1776, the Continental Congress appointed a committee to design a Great Seal or national emblem for the new country, and over a period of years several committees, which included such distinguished patriots as Benjamin Franklin, Thomas Jefferson and John Adams, undertook the project but the final design was not approved until 20 June 1782 and it was used for the first time on September 16th of that year by its co-creator; Charles Thomson, the Secretary of the Continental Congress (1774-89).

Among those involved with the design of the Great Seal, John Adams (1735-1826), the second President of the United States (1797-1801), had close ties with the Netherlands. After securing a Treaty of Alliance in 1778, but remaining unsuccessful in this cause in Great Britain, he moved to Amsterdam in January 1781, as Minister to the Netherlands.

On 19 April 1782, the Netherlands was the second country in Europe to recognize the United States as an independent government, and later that year provided a loan followed by a treaty of amity and commerce – a treaty that became mutually beneficial to the pottery industry in Delft, whose city council in 1782 had urged the Staten Generaal for a trade agreement with the United States.[1] After the recognition by the Dutch government was granted, John Adams flew the American flag outside a house in The Hague, and by doing so established the first American Embassy in the world.

Blue and White Tobacco Jar with Brass Cover
Delft, circa 1785

Painted on the front of the ovoid body with the Great Seal of the United States of America represented by an eagle emblazoned on his breast with a striped shield, supporting in his beak a banderole inscribed AMERICAN UNION, and clasping in his talons a cluster of arrows and an olive branch above the inscription No 13, all within a floral cartouche bearing fruits; the brass cover surmounted by a baluster-form finial.