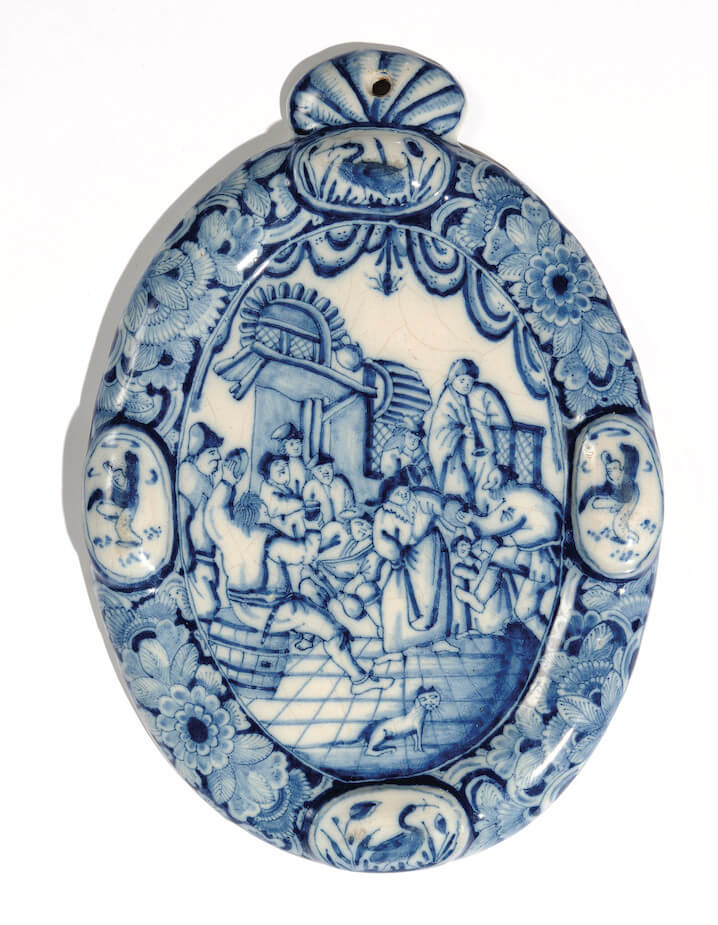 Every month we present a special object from the Aronson Antiquairs’ collection. This month we would like to show you this blue and white oval plaque, made around 1705. The plaque depicts a lively tavern scene. Peasants are reveling as they watch a couple dancing to the music of a horn or shawm player. A skeptical cat is seated on a tiled floor in the foreground. The scene is framed by a rounded, blue-ground border of large blossoms and foliage. The framed border is interrupted with four molded oval panels painted at the sides with chinoiserie scenes of a dancing Chinese boy (a so-called Zotje), and at the top and bottom the panels are decorated with a long-billed bird amidst grassy plants.

In the Low Countries, genre paintings enjoyed a distinct popularity, with paintings showing scenes of ordinary people engaged in common activities. Especially, scenes of drinking were a recurring theme. Delftware painters were influenced by these popular scenes and recreated them on plaques. An engraving after a painting by Adriaen van Ostade (1610-1685) was the inspiration for this jolly tavern scene. Two different print sources may have served as models for the Delft artist: the etching of ‘The Country-Fair’ by Haarlem artist, Joannes Visscher (1633- after 1692), published by Nicolaes Visscher; and ‘Peasant Couple Dancing in Front of an Inn,’ by Willem de Broen, dated 1705.

The two aforementioned sources are printed in mirror-image to each other. In this case, the direction of the print compared with the painting on the plaque should not be a limiting factor for identifying the plaque’s graphic source. If a stencil is made of an engraving and then applied to a plaque, both the original print and the image on the plaque would correspond in direction. If that technique was used on the present plaque, then it would favor the Visscher print as the source. Likewise, copies made after engravings or etchings, which are in mirror image, would result in an image on the plaque in mirror image to the original. But it must be noted that no matter what the orientation of the print was, the Delft painter could transfer the stencil drawings in either direction, as he wished.

Blue and White Plaque
Delft, circa 1705

Painted with a tavern scene of peasants reveling and watching a couple dancing to the music of a horn-player, a skeptical cat seated on the tiled floor in the foreground, the rounded self-frame with a blue-ground border of large blossoms and profuse foliage and interrupted with four molded oval panels painted at the sides with a dancing Chinese boy (Zotje) and at the top and bottom with a long-billed bird amidst grassy plants, and the top further molded with a shell-form crest pierced with a hole for suspension, the reverse unglazed.