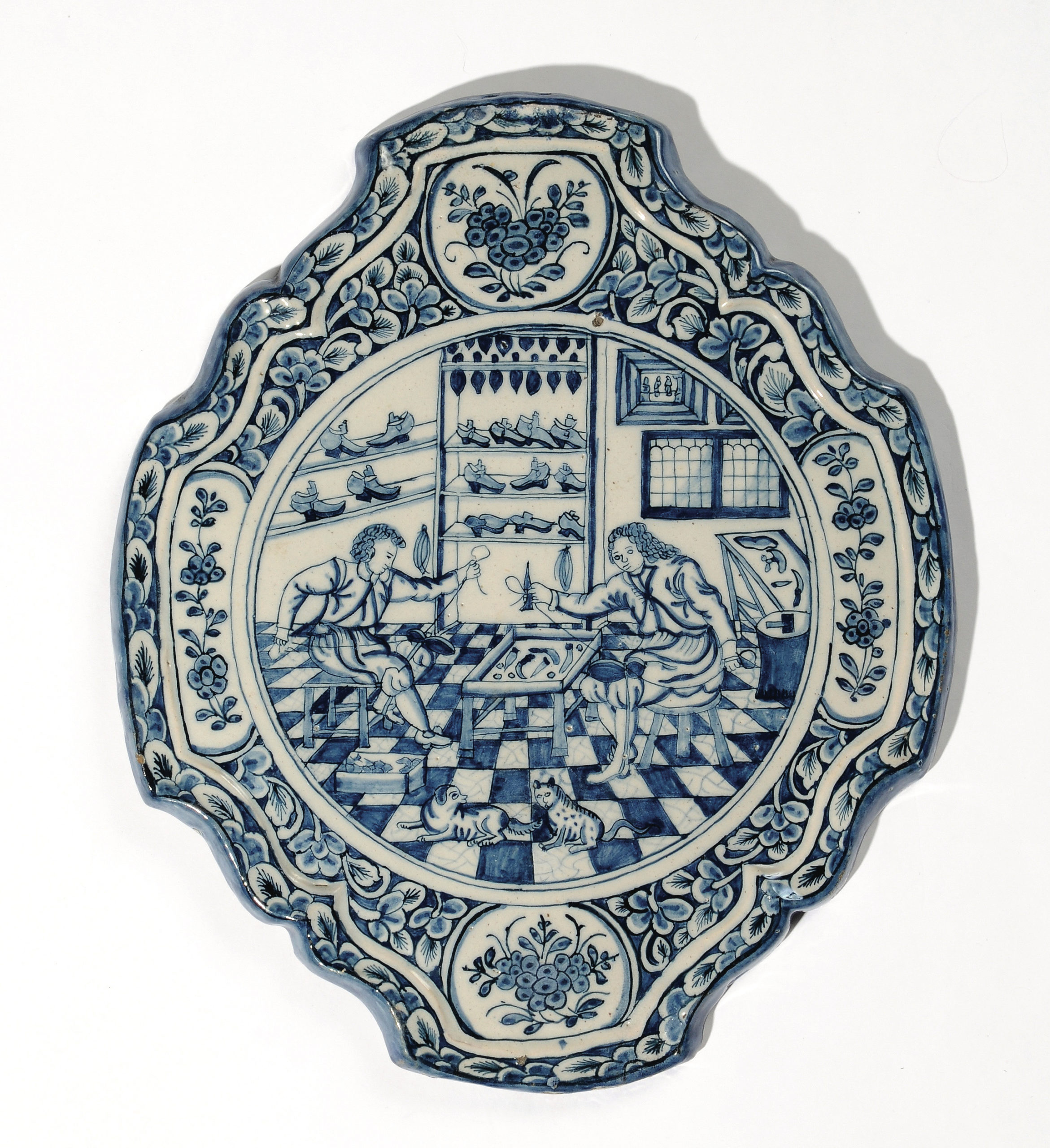 Every month we present a special object from the Aronson Antiquairs’ collection. This month we would like to show you this blue and white plaque, from circa 1760.

Made in the city of Rotterdam (probably Schiedamschedijk), the plaque shows two cobblers seated at their bench and sewing shoes. At their feet is a recumbent dog and a seated cat on the tiled floor. Shelves holding fashionable shoes and a table with tools decorate the background of the shop. The blue and white tile floor is painted in perspective, and was probably done to exhibit the artist’s skill. Similar marble floors were used in Dutch genre-interiors in the middle and third quarter of the seventeenth century. Notable to the craft are the straps along the cobblers’ legs, with which they attach the shoes firmly to their knee to facilitate their work. Although the print source for this plaque is unknown, there are similarities with images from several print series of artisans. The left figure in the plaque resembles the posture of the left cobbler in a woodcut by Jost Amman (1539–1591) illustrating the Ständebuch (Eygentliche Beschreibung Aller Stande auff Erden) [Exact Description of All Ranks on Earth] of Hans Sachs (1494- 576), published in 1568 in Frankfurt. Between the two figures in the foreground of this print is also a table with tools, and beneath the ceiling is a wooden rod with shoes hanging on pegs. The right figure on the plaque resembles the shoemaker in the sketch by Jan Luyken (1649-1712), which he made for Het Menselyk Bedryf (The Book of Trades) of 1694.

Genre painting enjoyed enormous popularity in Northern Europe, particularly in the seventeenth century, and especially in the Netherlands. Many of the Dutch practitioners elevated what was once considered a humble art form into a desirable subject, which even rivalled classically esteemed subjects such as history paintings. Genre painting depicts aspects of everyday life. Although subjects widely range, there are several reoccurring themes. One of the more common themes found in genre paintings and prints was the depiction of craftsmen. Delft painters relied on genre art and prints for source material, therefore many plaques and plates are similarly decorated with typical seventeenth century professions.

It is noteworthy that the depiction of agricultural labor (plowing, seeding, planting, harvesting, pruning), was not represented in genre paintings despite its prominence in the beginning of the seventeenth century. Although the portrayal of professions and trades remains mostly limited to series of prints or book-illustrations, few professions, such as the doctor, the dentist, the cobbler, the shopkeeper and the blacksmith, found its way to genre paintings on canvas or panel. These typical 17th-century professions also found their way to Delftware.

Painted with the interior of a cobbler’s shop depicting two cobblers seated on either side of their bench and sewing shoes, at their feet a recumbent dog and a seated cat on the tiled floor, behind them shelves of fashionable shoes, a double window and a table with tools, the scene in a roundel within a blue ground reserved with four floral panels separated by trailing flowering vines, and the molded self-frame with a foliate border within a blue outer edge pierced at the top with two suspension holes; the reverse glazed.