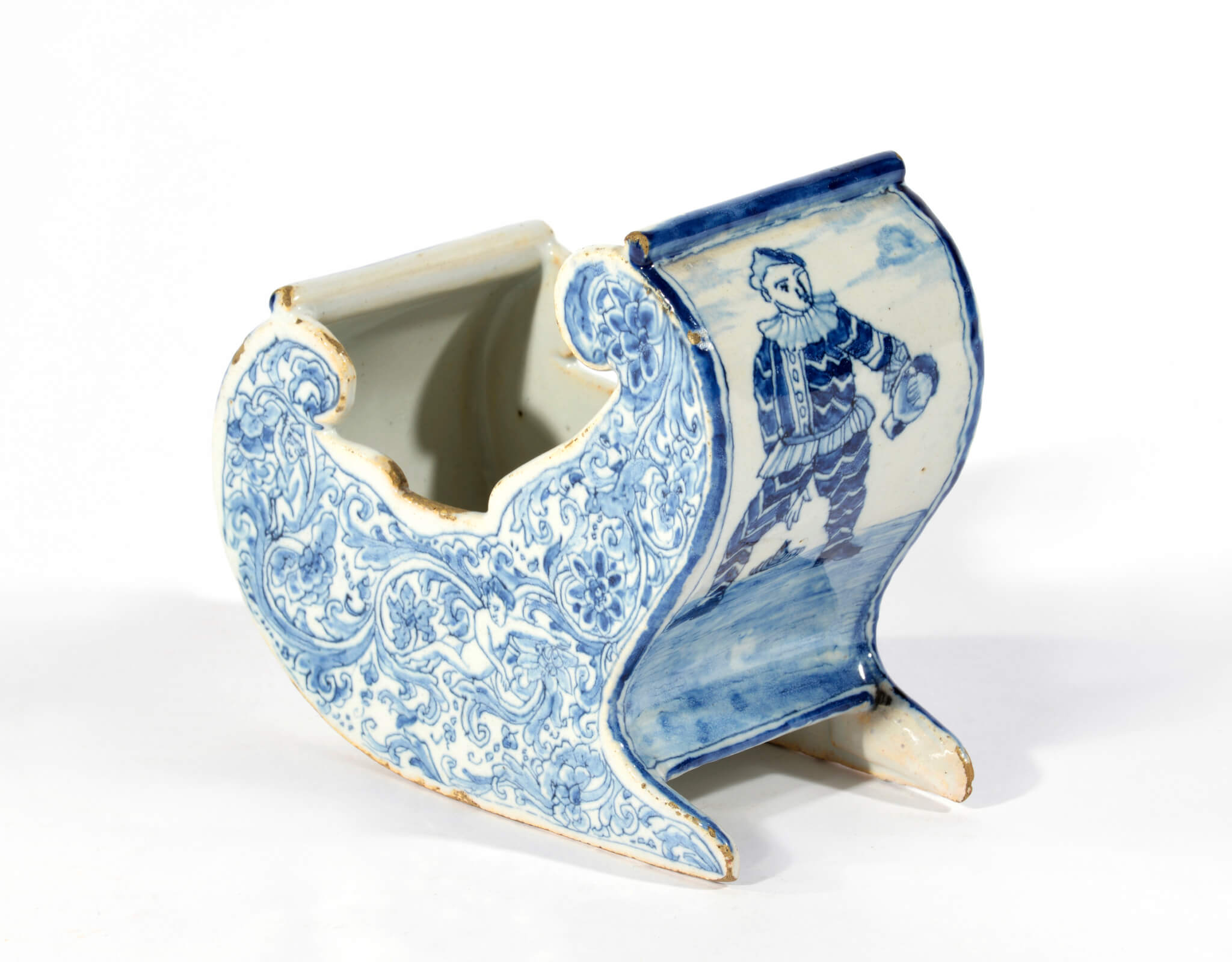 Every month we present a special object from the Aronson Antiquairs’ collection. This month we would like to show you this blue and white model of a sleigh, from circa 1750. Delft sleighs are often referred to as pipe stands, however these objects were probably used for decoration. Examples of Dutch porcelain pipe stands from circa 1780 have indentations on the front to support the pipe stem, whereas their Delft counterparts do not.[1] This sleigh is profusely decorated on either side of the scroll-shaped body with two putti and a dog amidst a profusion of blossoms issuing from scrolling leafy vines. The front is also painted with floral decorations of a foliate lappet issuing a cluster of three blossoms hanging from a scrolling leaf. 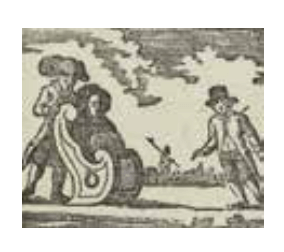 The Delft potters modeled these objects after the original ice sleighs, in which a lady would take a leisurely ride across the ice while propelled by a skating gentleman. The original sleigh can be seen on a penny print by J. Noman, Zaltbommel in the Rijksmuseum, Amsterdam. The accompanying Dutch text refers to the leisurely wintertime activity: ‘It’s January with air crisply freezing; But one seeks a measure of pleasure on the ice; With rides in the ice sleigh and skating, so pleasing; To ladies, who find them diverting and nice.’[2]  The Delft painters also closely imitated the decoration of the original ice sleighs in their earthenware designs, with painted tasseled square cushions that evoke the warm and comfortable seats.

More surprising is the decoration on the back of the sleigh: a Harlequin figure, holding a hat in his left hand and pointing to excrement on the ground below. The imagery of a so-called ‘kakkertje’ (‘little pooper’) is a common theme on seventeenth-century Dutch tiles and prints. These scenes are mostly related to fairs, taverns and pubs, where merry-makers could indulge in eating, drinking and smoking, with all the attendant unpleasantness often associated with excess, such as vomiting and peeing. These images were also used to ridicule somebody. Often a squatting man with his trousers on his knees is depicted from behind, sometimes accompanied by a turd. Although it was a popular image throughout Dutch fine art, the depiction of a harlequin with a turd on a sleigh is somewhat uncommon.[3]

Blue and White Model of a Sleigh
Delft, circa 1750

The scroll-shaped body painted on either side with two putti and a dog amidst a profusion of blossoms issuing from scrolling leafy vines, the front with a foliate lappet issuing a cluster of three blossoms pendent from a scrolling leaf, on the back with a figure of Harlequin holding a hat in his left hand and pointing to excrement on the ground below, and on the seat with a tasseled square cushion.

[3]   There is a porcelain plate in the collection of the Rijksmuseum, Amsterdam with the combination of a harlequin and excrements. The plate is painted with a caricatural figure and the following inscription: ‘Schijt Actien en windhandel’ (‘shit actions and wind trade’). This specific plate (inv. no. AK-RBK-17521-B) is part of a larger series of seven ‘action plates’ made in China between 1725 and 1749, which refer to the speculation in shares that took place in Europe at the beginning of the eighteenth century. Unfortunately it is unknown what example the Chinese painter had. Often reference is made to the Dutch publication Het Groote Tafereel der Foolness (The Great Mirror of Folly). This collection of cartoons about trading in shares with its disastrous effects was issued in 1720, but no image can be associated with these ‘action plates’.