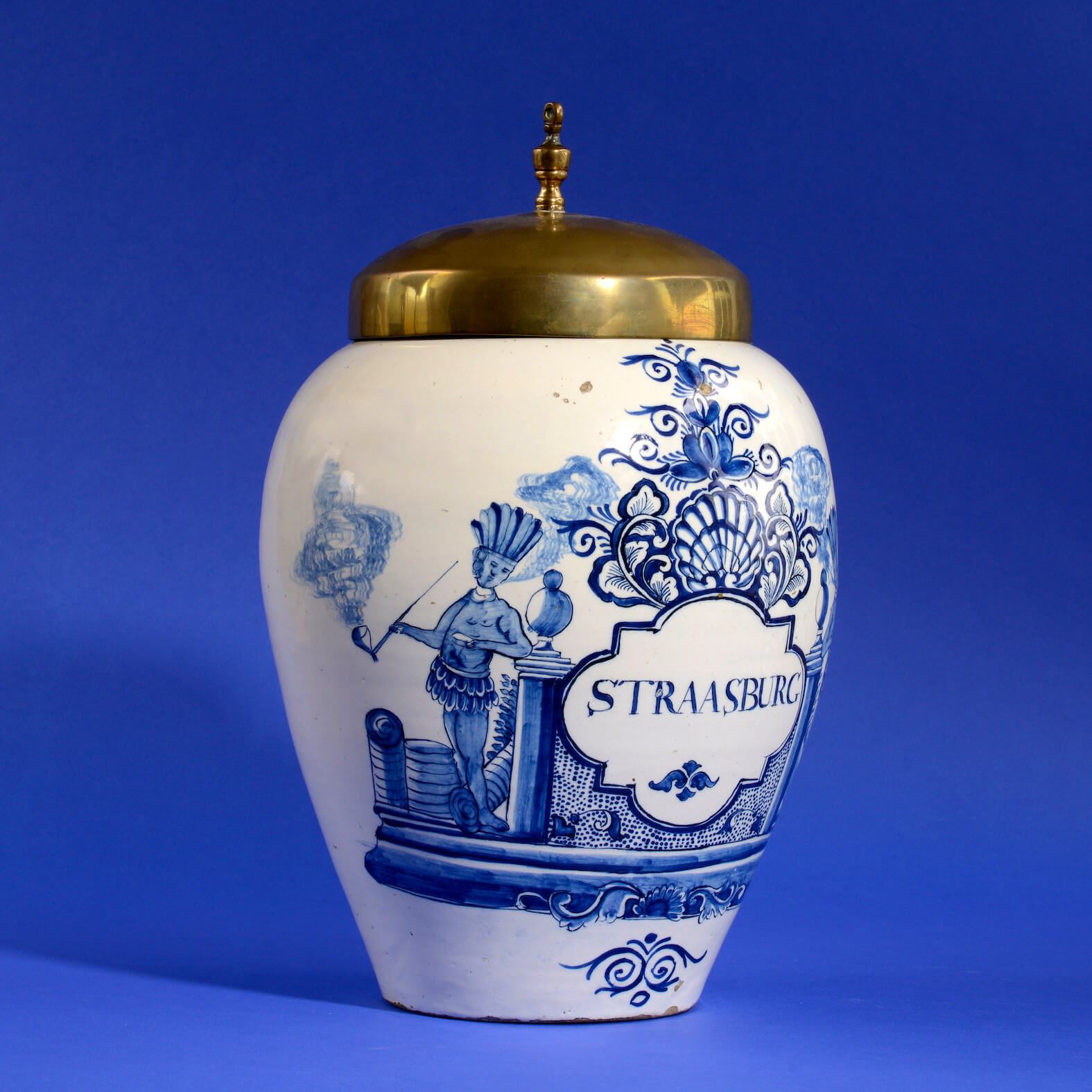 Every month we present a special object from the Aronson Antiquairs’ collection. This month we would like to show this large blue and white tobacco jar with brass cover from circa 1795.

The large tobacco jar is painted with two Indian chieftains smoking a pipe standing next to a covered tobacco jar on a pedestal. They are flanking a cartouche inscribed STRAASBURG. These inscriptions refer often to the type of tobacco, the place where the tobacco was made, or to the port where the tobacco was traded. Strasbourg was prosperous city, which was due to both the fertile land in its surroundings and its strategic location on trade routes. The history of the city and its port are closely linked. In Strasbourg, ships loaded grain and wine and from the seventeenth century onwards, tobacco from Alsace to transport this merchandise elsewhere via the rivers Ill and Rhine.

Tobacco, cultivated and used in the Americas for over 2.5 millennia, was first imported to Spain around 1528, found its way quickly to Portugal and by the middle of the century to France. Besides the brown leaves and the seeds, which had been brought back to Spain in 1559 and planted near Toledo on the orders of Philip II (1527- 1598), King of Spain, Milan, Naples and Sicily and the Netherlands, the Iberian traders returned with the knowledge of tobacco’s use and how to smoke it in pipes. Initially it was considered by the Europeans to be the “sacred herb” because of its presumed medicinal properties, but as soon as its importation was increased sufficiently by the Spanish and Portuguese, who developed a monopoly in the sixteenth century on the trade with South and Central America, its popularity began to expand and spread geographically.

Sir Walter Raleigh (1552-1618), granted a royal charter by Queen Elizabeth I (1533-1603) in 1584 to explore and colonize uncharted lands, is credited for bringing back to England the first tobacco from Virginia, which became an enormously lucrative crop – “brown gold”– and a contributor not only to the colonization of the American colonies from the early seventeenth century onward, but also to the ultimately divisive slave trade. By the end of the seventeenth century England had assumed control over large tobacco plantations along the southeastern coast of America: Virginia, the Carolinas and Maryland, and could supply Europe’s requirements for this new and fashionable custom.

In 1700 half of the total importation of 20,000,000 pounds of tobacco into Great Britain was exported to Amsterdam, where a large tobacco industry flourished. The tobacco leaves, already cured, fermented and dried on the plantations, arrived in Europe in the form of large rolls, which at the tobacco shops were often stored in large Dutch Delftware jars appropriately labeled with their contents. At a customer’s request the tobacco was either cut to smoke or chew, or rasped to create snuff, as is sometimes indicated on jars with the inscription “RAPPE” (from the French ‘tabac rappé’: finely grated tobacco for a strong, moist snuff). Once at the smoker’s home, the tobacco could be stored in humidors or in specially designed jars or boxes, also made of Dutch Delftware, to keep it moist. Often small quantities of tobacco were kept in charmingly decorated Delft boxes, generally modeled after silver prototypes, which could be used as functional ornaments on a desk or table. 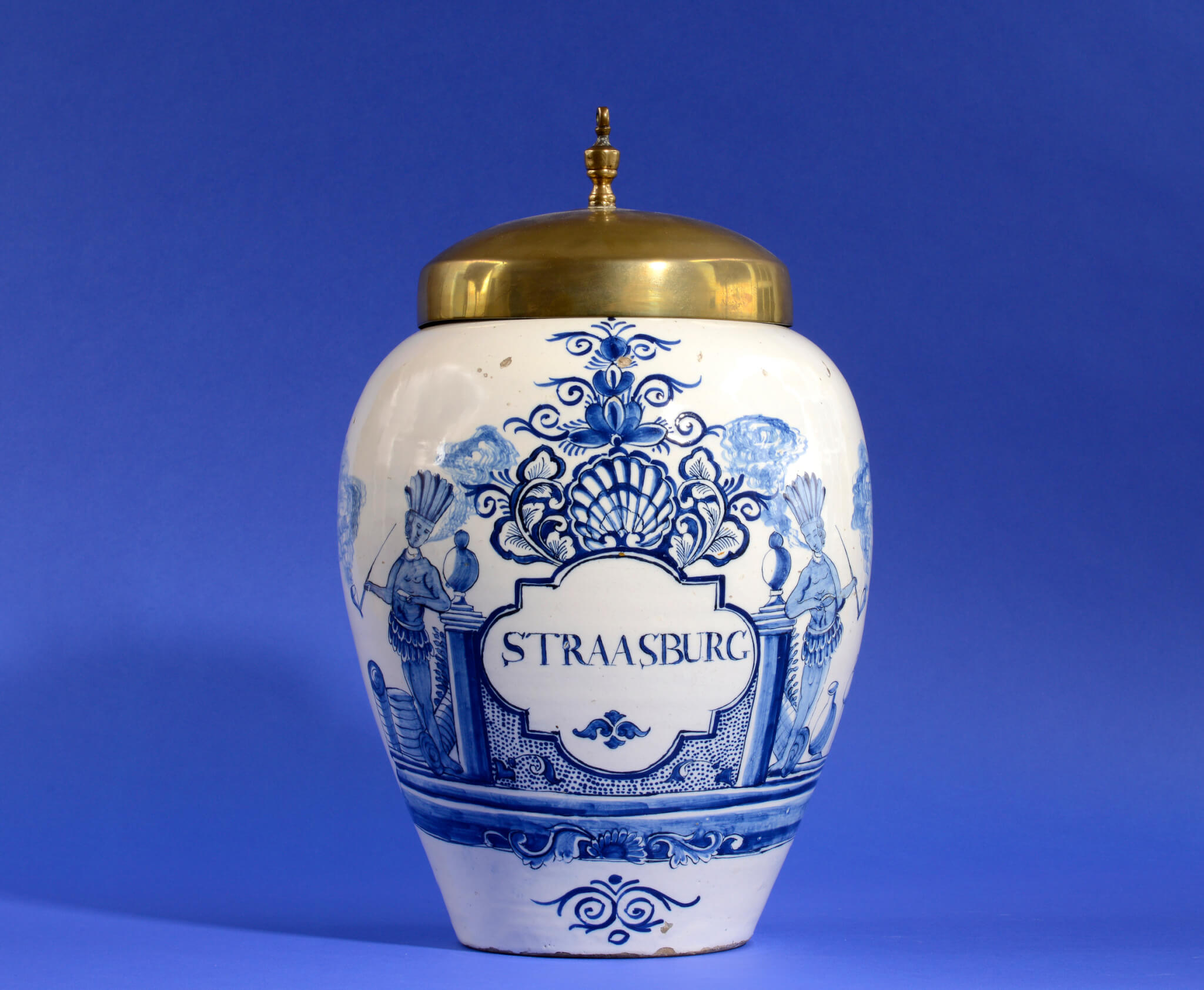 Painted on the from of the ovoid body with two Indian chieftains smoking a pipe standing next to a covered tobacco jar on a pedestal, flanking a cartouche enclosed within foliate scrolls and patterned panels, surmounted by a shell ornament with flowers and leaves, and inscribed STRAASBURG, and a hammered brass cover.