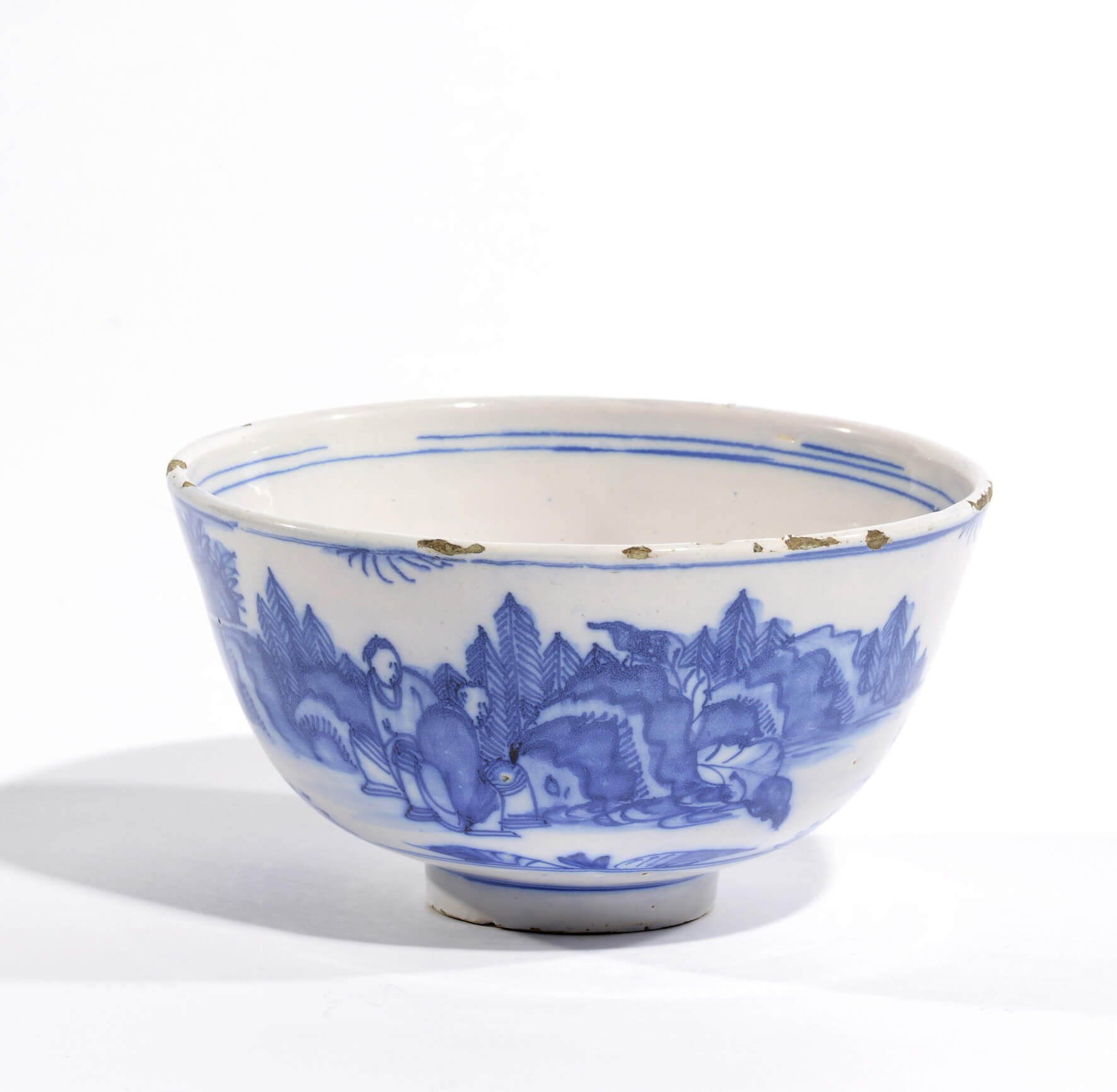 Every month we present a special object from the Aronson Antiquairs’ collection. This month we would like to show you this blue and white chinoiserie deep bowl. The bowl, which was made around 1670, is painted around the exterior with a continuous chinoiserie scene. Two pairs of Chinese men are seated before shrubbery and rocks, and in one vignette a fence post and jardiniere. The interior is painted with a large leaf device within a central roundel of two concentric lines.

Large bowls are considerably less common in Dutch Delft than in English Delft, which may be a consequence of the drinking customs of the two nations. Although much alcohol was consumed in taverns or pubs in both Holland and Britain, on the Continent – and particularly in the Netherlands and Germany – most drinking of that nature was done from earthenware, stoneware and metal tankards. This in contrast to England where the punch bowl often served as the vessel from which spirituous beverages were consumed. Its contents were generally ladled into glasses, but by the middle of the eighteenth century the bowl itself, generally of a smaller size, could be passed around among the imbibers. Certainly bowls have a multiplicity of uses – not just for the serving of punch or other celebratory drinks – but almost all of their uses are practical.

Delft price lists indicate that bowls, with either plain or fluted sides, were introduced to the market in several sizes. The largest were called ‘kastkom’ or ‘cupboard bowls’ referring to their decorative function of being placed on the top of a cupboard or cabinet, as shown in genre and still-life paintings of the seventeenth and eighteenth centuries, or as mentioned in written sources of the period.

Large bowls in Dutch Delftware are rare, possibly because through use their survival rate is low. Because of the tension in the clay body of bowls, created by being thrown on a potter’s wheel, they are very vulnerable to cracking and damage. Once broken, even if repaired, they are unusable, and can only serve a decorative purpose.

Painted around the exterior with two pairs of Chinese men seated before shrubbery and rocks, and in one
vignette a fence post and a jardinière, in a continuous landscape, the interior with a large leaf device painted within a central roundel of two concentric lines repeated below the rim edge and around the footrim on the exterior.