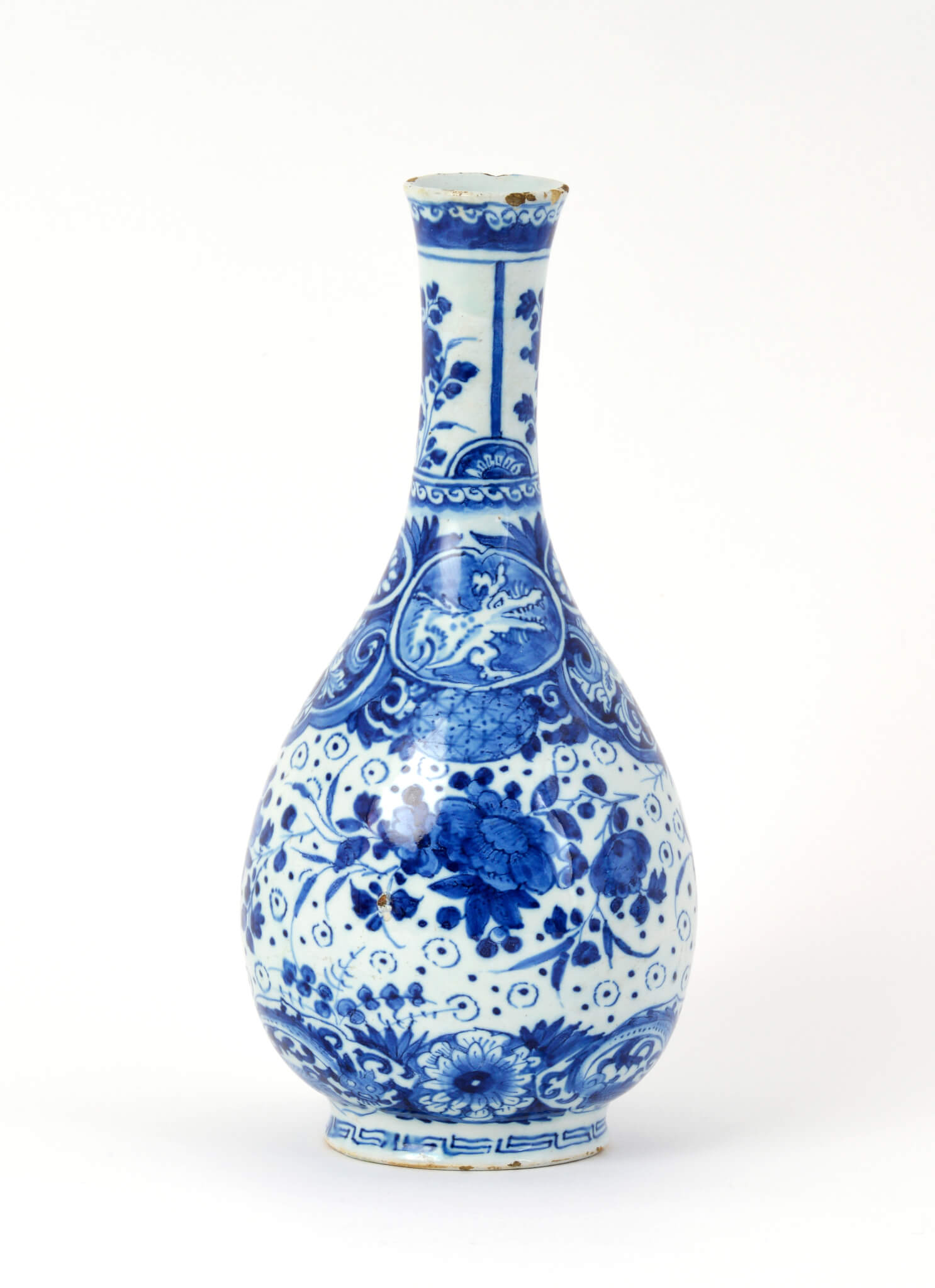 Every month we present a special object from the Aronson Antiquairs’ collection. This month we would like to show you this blue and white bottle vase, from circa 1700.

The vase is marked for Lambertus van Eenhoorn, who was the owner of De Metaale Pot (The Metal Pot) factory from 1691 until 1721. The delicately decorated vase with a oeils-de-perdrix and dotted ground is painted with medallions with a crocodile-like crouching dragon. At the time of Lambertus van Eenhoorn’s ownership, the craze for blue and white Wanli (1572-1620) and Kangxi (1662-1722) period porcelain was at its height. The blue and white wares were imported by the Dutch East India Company (VOC) in large quantities in the Netherlands. Many pieces designed by De Metaale Pot factory under Lambertus’ ownership drew inspiration directly from the blue and white Chinese porcelain. The decorations on these ware often consisted of varied floral and landscape motifs, and occasionally included figural subjects, such as the dragons depicted in the medallions. The mythical dragon is however a rare motif on Delftware.

The origins of mythical dragons are vague, however it is believed that over 4,000 years ago, China was made up of two large tribes and several smaller tribes, all of which were symbolized by an animal. When the two large tribes unified, they chose the dragon as their symbol. The Han Chinese still claim to be descendants of this beastly creature. According to manuscripts of the Song Dynasty (960-1279), the dragon (represented by the traditional or simplified character), was an animal composed of various parts of nine other animals, including: “the head of an ox or donkey, the eyes of a shrimp, the horns of a deer, the feet of a phoenix, and the body of a serpent covered with the scales of a fish.” Assuming the best traits of the tiger, the fish, the serpent and the eagle, it was considered the most superior, powerful, wise and regal of beasts, and eventually it became associated with the emperor (the empress’s symbol being the mythical bird, the fenghuang, also referred to as the august rooster or the Chinese phoenix).

In Chinese art, the dragon is often depicted clutching or chasing after a pearl, which is emblematic of the beast’s supernatural powers. The dragon is revered as a divine creature that symbolizes good fortune, far from the terrifying and evil creature it came to represent in the West, where, through Europe’s own legends, it was the dragon-slayer who was the symbol of might, supremacy and heroism. However, Delft potters and especially the ceramic painters imitated motifs from Chinese porcelain without understanding their symbolism. As the ceramics painter in Delft was not familiar with the symbolism of the Chinese dragon, it appears here that he was more inspired by a ‘happy crocodile.’

Marked LVE in blue for Lambertus van Eenhoorn, the owner of De Metaale Pot (The Metal Pot) factory from 1691 until 1721

Painted around the elongated teardrop-shaped body with large floral sprays on a oeils-de-perdrix and dotted ground above a foliate border consisting of three roundels with large flowerheads alternated by three medallions with a crouching dragon, and beneath a wide foliate border with two roundels with a flowerhead above a large scrollwork patterned ruyi-head, alternated by two medallions with a crocodile-like dragon, the slightly flaring cylindrical neck with two panels of flowering sprigs alternated by demi-flowerhead patterned roundels, between a border of demi-ruyi-heads.