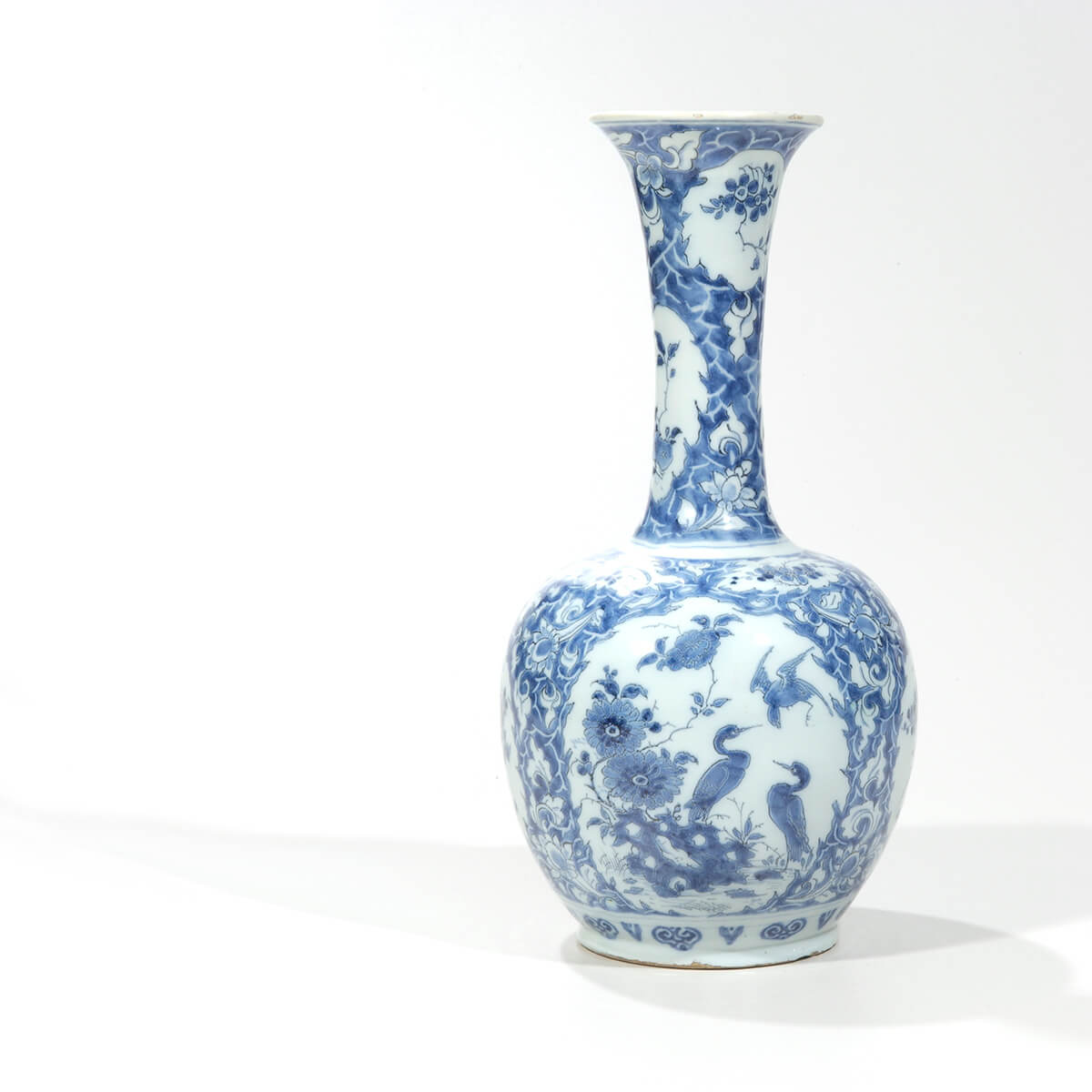 Every month we present a special object from the Aronson Antiquairs’ collection. This month we would like to show you this blue and white bottle vase. The vase is marked for Rochus Hoppesteyn, who was the owner of Het Moriaenshooft (The Moor’s Head) factory from 1686 until 1692.

Het Moriaenshooft (The Moor’s Head) factory was located in the Gasthuislaan in Zuidkant, an area in Delft with a large concentration of potteries. Although the founding date of the factory is unknown, the first owner was probably Jan Aelbrechtsz. Groenland, who acquired half of the company’s shares in 1658. There are three main phases that mark the factory’s history: the beginning of the factory and its development under the Hoppesteyn family (1658-1690), the splitting of the factory into two independent companies (1690-1772), and the reunion of the factory into one functioning pottery (1772- 1792).

Rochus Hoppesteyn started assisting his mother Jannetge van Straten at Het Moriaenshooft, after his father Jacob Hoppesteyn’s death in 1671, and ran together successfully the factory. The years of co-management between Van Straten and her son were a period of exceptional production. One feat achieved during their management was the experimentation with polychrome decoration through the mixed fire technique. In this process, the decoration was first applied on the object and then fired at a high temperature. Next, gold and red colors were applied during a third fire at a low temperature, resulting in an exceptionally refined object that was undoubtedly intended for the highest class.

After the passing of his mother in 1686, Rochus Hoppesteyn took the full ownership. He obtained the status of master in 1680, when he was only 19 years old. Hoppesteyn was in fact an exceptionally talented craftsman and demonstrated immense artistic skill. Unfortunately, his business skills were less developed, and the factory was soon plagued with financial trouble. In order to ensure its safety, Hoppesteyn sold part of the factory. In fact, his dearth of business acumen, his reluctance to pursue creditors and his tendency toward dissolute behaviour caused both financial and marital difficulties resulting in the necessity of selling a significant part of the factory.

In 1690, the factory was separated into two independently managed potteries. The part that was sold became Het Oude Moriaenshooft (The Old Moor’s Head) whereas Het Jonge Moriaenshooft (The Young Moor’s Head) stayed under the ownership of Hoppesteyn. Two years later, he passed away, leaving his wife a considerable amount of unpaid debt. The company was declared bankrupt, and the pottery, shop, materials and remaining production were sold to the porceleynbakker (porcelain potter), Lieve van Dalen.

Marked RIHS in blue for Rochus Hoppesteyn, who was the owner of Het Moriaenshooft (The Moor’s Head) factory from 1686 until 1692

Painted with oriental birds and flowers within two large and two smaller panels reserved on a floral and foliate ground, around the shoulder reserved with four smaller floral panels and reserved on the tall neck with panels of fruiting or flowering branches.